A dual-ribbon mic emulating tried-and-trusted designs, the R1 ST is a versatile studio tool. John Pickford puts it through its paces with a range of instruments…

Ribbon microphones might not be the rare beasts they once were, however condenser and dynamic types still comprehensively outnumber them. Stereo mics are less common still than their standard mono counterparts, so the prospect of testing this beast was tantalising to say the least. And what a beast it is, measuring 70x330mm and weighing in at over 1.5kg when coupled with its shock mount.

Designed to emulate the classic RCA ribbon designs from the first half of the last century, the R1 ST comprises two vintage-style ribbon sections with transformer-balanced outputs. The two ribbon elements are arranged vertically, one above the other, each aimed 45 degrees from centre in the traditional Blumlein configuration, with a figure-8 polar pattern.

The Blumlein-pair technique has long been favoured for producing an accurate, stable stereo image and the R1 ST does the job without having to worry about precise placement of two mono mics.

Speaking of mono, the R1 ST can be used to capture a single sound source in mono if desired, simply by positioning the mic so that just one of the ribbons is pointing at the sound source. The other ribbon will, of course, pick up ambient room sound, much like a standard mic with a bi-polar (figure-8) directional pattern. However, bi-polar designs remain quite ‘deaf’ to sounds originating from behind the capsule, more so than conventional cardioid designs.

All ribbon microphones, by their very nature, are fragile and must be handled with great care at all times. Even moving one through the air too quickly can destroy the delicate ribbon – or in this case – ribbons. Wind shields should be used for close-mic’ing vocals (always a good idea with any mic, to protect the capsule from spittle) and the mic should also be protected from sudden blasts of air emanating from brass instruments and even large and loud speaker cabinets.

Again, the fragile ribbons should be protected when the mic is not in use by storing vertically. The 50mm ribbons can sag if stored horizontally for lengthy periods, degrading the performance of the mic. The other important thing to remember when using ribbon mics is to never apply 48V phantom power, as this is another surefire way to destroy the ribbon. Always ensure that phantom power is switched off before connecting to your desk channel or mic preamplifier.

Now, if I haven’t put you off of the R1 ST with all of this precautionary advice, it’s time to look at the advantages of ribbon mics in general and the R1 ST specifically. In broad terms, ribbons are known for possessing a smooth, warm and rounded bottom end coupled with an expansive (some may use the term ‘phat’) midrange with superior transient-response characteristics. The top end is rarely quite as extended as the best condenser mics; however, the treble response is often notably sweeter, especially when used in conjunction with valve preamplification.

It’s these characteristics that make ribbon mics a first choice for drum overheads, although I’d stop short of placing one inside a rock drummer’s kick drum. Ribbons often sound great on brass instruments, revealing the rasp of trumpets and trombones without compromising the weight and body of the instrument. Both acoustic and electric basses can benefit from a ribbon’s smooth low-end response and acoustic guitars sound gorgeous mic’d with a ribbon, especially if it’s a prominent instrument in the mix rather than a background strummed rhythm part.

A good stereo mic is always a useful addition to your microphone collection, ideal for drum overheads or ensemble stereo recordings such as string sections. Not having to worry about the phase relationship between two mics placed for stereo recording is useful and makes finding the stereo sweet spot easier. 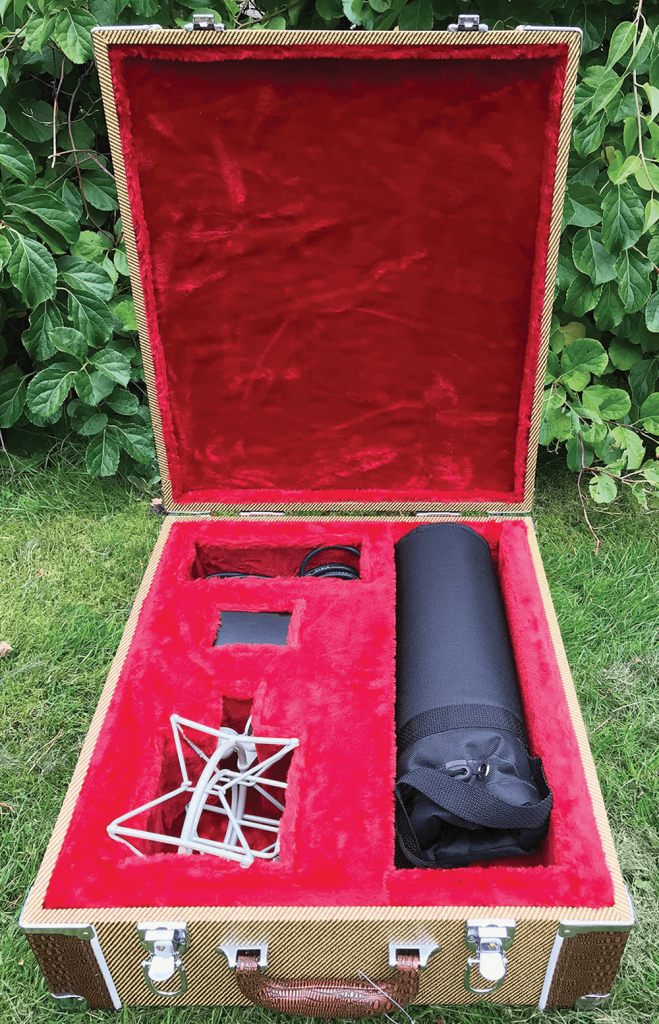 Ribbon mics in general excel at capturing acoustic instruments in fine detail, with their superior transient response never blurring leading edges. The R1 ST is a superb example of the breed, enabling fuss-free stereo recording while able to serve equally well as a standard mono microphone. With its slightly euphonic nature, the R1 ST adds a top-end brightness that flatters many sounds, particularly those that would otherwise benefit from some HF EQ sweetening.

Despite the delicate nature of the breed, the R1 ST is capable of handling high sound-pressure levels with a quoted maximum SPL figure of 160dB. As with all ribbon designs, sensitivity is on the low side, meaning that they need more juice from a preamplifier to achieve similar SPLs to condenser or other dynamic types (ribbons are technically a type of dynamic microphone). However, this is rarely an issue unless you’re attempting to capture quiet sound sources from a distance.

Opening the box, or rather the sturdy yet attractive flight case (covered in a vintage-style brown cloth trim and lined with red fur), the R1 ST is presented in a protective sock along with its bespoke shock-mount cradle and a cable-splitting box for left and right output.

Plugging the mic into our Thermionic Culture Rooster 2 preamplifier, I placed the R1 ST over one of our house drum kits – a 1960s Olympic Premier – along with a pair of classic Coles 4038 ribbon mics, my personal favourites for drum overheads.

In direct comparison, the R1 ST was noticeably brighter than the Coles, yet still provided the depth and weight I’ve come to love from ribbons on drums. Leading edges of snare-drum strikes were razor sharp, while cymbals were captured in detail with delicious harmonic overtones accompanying the initial transients of wood against metal.

Usually, when using the 4038s, I dial in quite a bit of top-end boost up around 10kHz. However, this was unnecessary with the GAP mic. The stereo image was spot on too, presenting a solid, widescreen image with left and right outputs fully panned.

Acoustic guitar was also well served by the R1 ST, producing a full-bodied, rich sound with plenty of treble detail. I compared this with a stereo recording of the same guitar made some time ago using a Neumann U-67 and AKG C414 in a mid/side setup. Interestingly, the U-67/C414 combination sounded darker and woodier, while the R1 ST sounded altogether more luscious and open and the soundstage seemed deeper. Only a touch of low-mid boom had me reaching for the EQ, but otherwise, it produced a gorgeous tone.

I rarely attempt to use ribbon mics on vocals, preferring to use a good large-diaphragm condenser. But I suspected that the GAP mic might sound good with a female folk singer who came in to record some solo acoustic guitar and vocal performances.

As she wanted to record her guitar and vocals separately, I decided to use the R1 ST to record her guitar (a smaller-bodied parlour guitar) in stereo and then use one side of the microphone (in mono) for the vocal overdubs. The results impressed me enormously, requiring hardly any sweetening in the final balance, except a touch of 16kHz sparkle on the vocal tracks.

Throughout the review process, the R1 ST impressed everyone who heard it, including the producer of a visiting rock band who was sceptical of its use as the main drum-kit overhead – until he heard the results. Time and again, the R1 ST’s incisive yet sweet sound profile captured voices, and especially acoustic instruments, beautifully.

I’d hesitate placing it close to a 15-inch bass speaker or in front of a screaming rock singer with poor microphone technique. Yet if you like your acoustic instruments to be captured with a touch of rose-tinted sweetness, rather than strictly sterile and neutral, and you want to make stereo recordings without the hassle of dealing with two microphones, Golden Age Project’s R1 ST should be high on your audition list.

A very highly regarded stereo ribbon microphone, based on a design by Bob Speiden, who inspired Dave Royer to go into the ribbon mic business. The SF-12 uses two 1.8-micron ribbons, also
arranged in a Blumlein configuration. 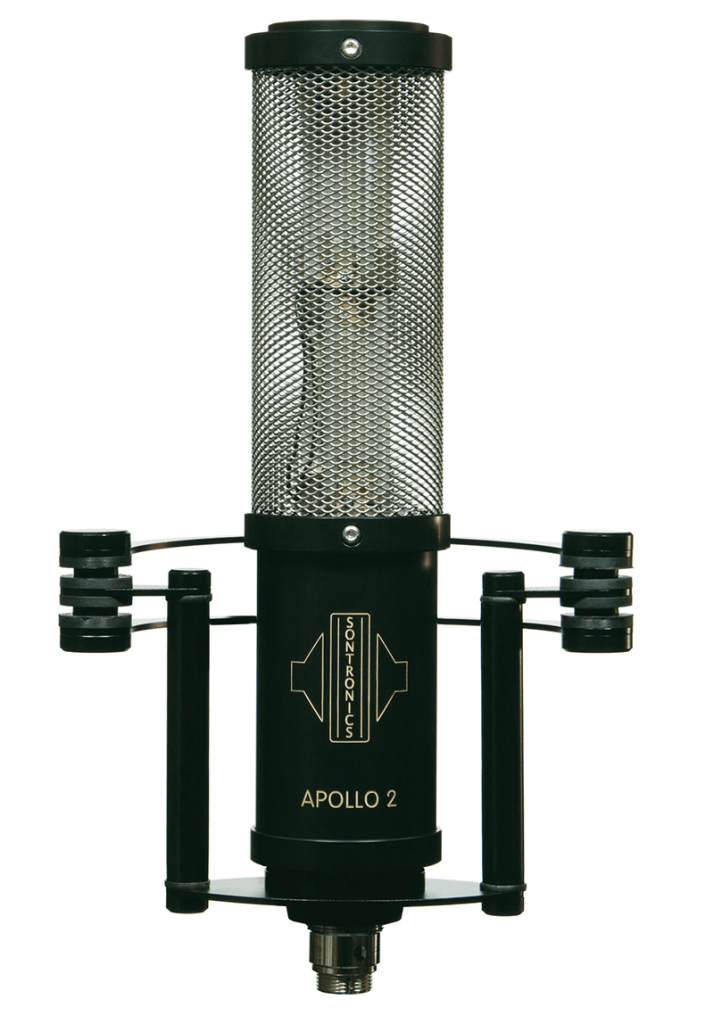 Sontronics’ stereo ribbon mic has recently had a makeover. The Apollo 2 uses active circuitry along with a pair of ribbon elements, again in the classic Blumlein configuration, to provide a smooth tone with incredibly low noise.