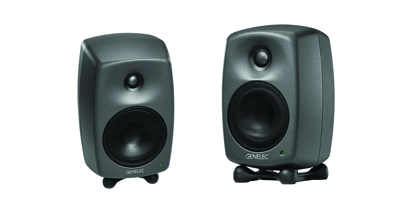 The new Genelec 8320A and 8330A monitors ship with Genelec’s SAM room calibration system. Huw Price tries the system with both models in the range… 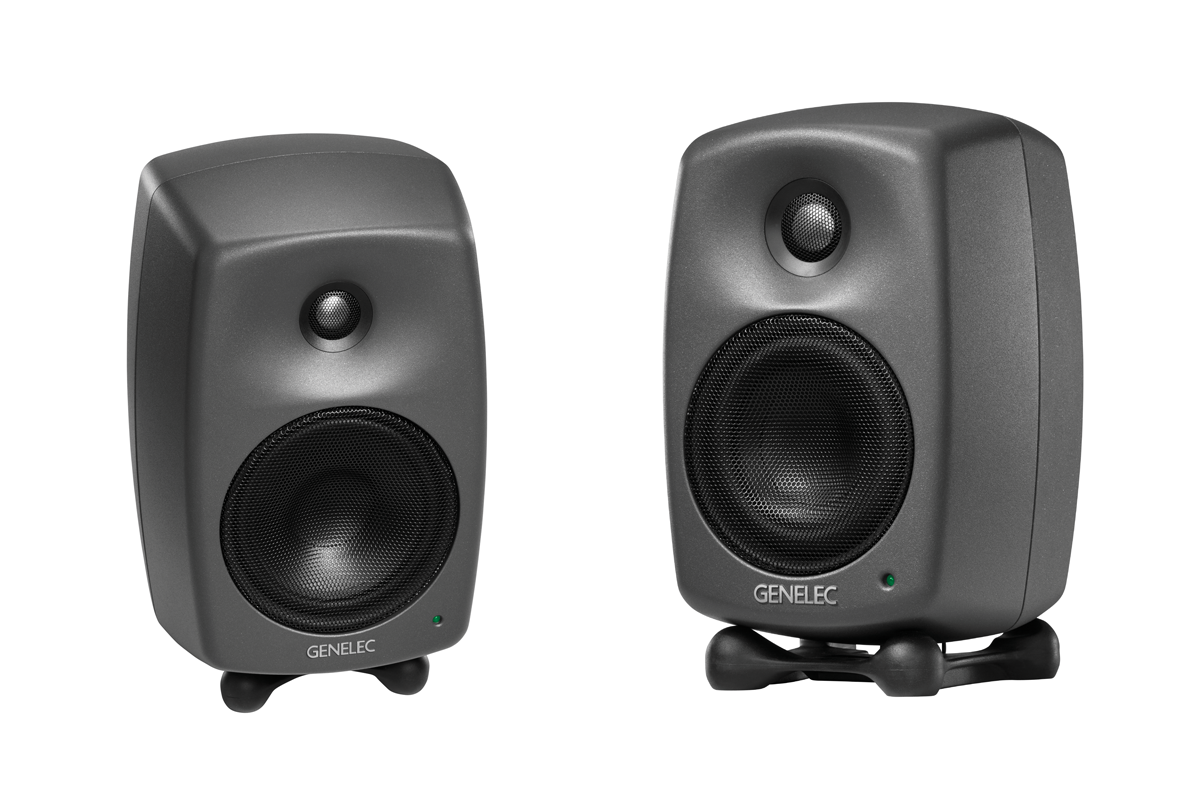 It’s a long while since Genelec dispensed with square-sided enclosures for most of its studio monitors. The rounded edges, smoothly integrated wave guides and curved sides of the cast-aluminium ported enclosures that replaced them have since come to embody the company’s distinctive approach to design and aesthetics.

At first glance, the 8300 series may appear a bit light on features. There are no dip switches to adjust frequency response and the only ‘control’ is the power switch on the back panel. But fear not: these monitors are highly sophisticated performers, whose parameters are controlled by Genelec’s SAM (Smart Active Monitoring) system.

Now available for both Macs and PCs, the latest SAM software can be downloaded from the Genelec website. Both monitors have analogue inputs, but the 8330A has AES/EBU digital input and output, supporting 16- to 24-bit word length and sample rates from 32 to 192 kHz.

Play It Again SAM
Both systems ship with a kit for speaker configuration based on your room measurement. This kit includes a GLM adaptor box, along with an omnidirectional measurement microphone and clip, a USB cable to connect the GLM adaptor to a computer and GLM network cables to link up the monitors to the GLM adaptor. You’ll need to provide your own microphone stand and audio cables, and there’s an optional desktop volume control, which plugs into the GLM adaptor.

Initial setup is conventional, and is based on the usual triangular arrangement, with both tweeters firing at a centrally located listener with the tweeters aimed directly towards the ears. Genelec’s four-cornered rubber base facilitates this thanks to a metal clip attachment, which enables the monitors to fire upwards and downwards as well as straight ahead. Alternatively, the 8300s can be mounted on a bracket or stand.

Running the SAM calibration software is straightforward enough that you should be able to figure out the essentials without recourse to the manual. The software allows adjustments of all aspects of monitor settings and full system control.

It also automatically aligns for level, timing, and equalisation of room-response anomalies. However, it is worth reading to discover some of the more sophisticated features of the system – such as user definable settings for the ISS power-saving auto-standby feature, which range from 10 minutes to never. You can read more about the setup procedure in the In Use box.

Despite the difference in size, power ratings are identical; all tweeters and woofers have 50 watts of amplification. The specs for the tweeters suggest they’re identical, but the 8320A has a four-inch woofer, while the 8330A’s is five and its enclosure provides extra internal capacity for more bass extension. 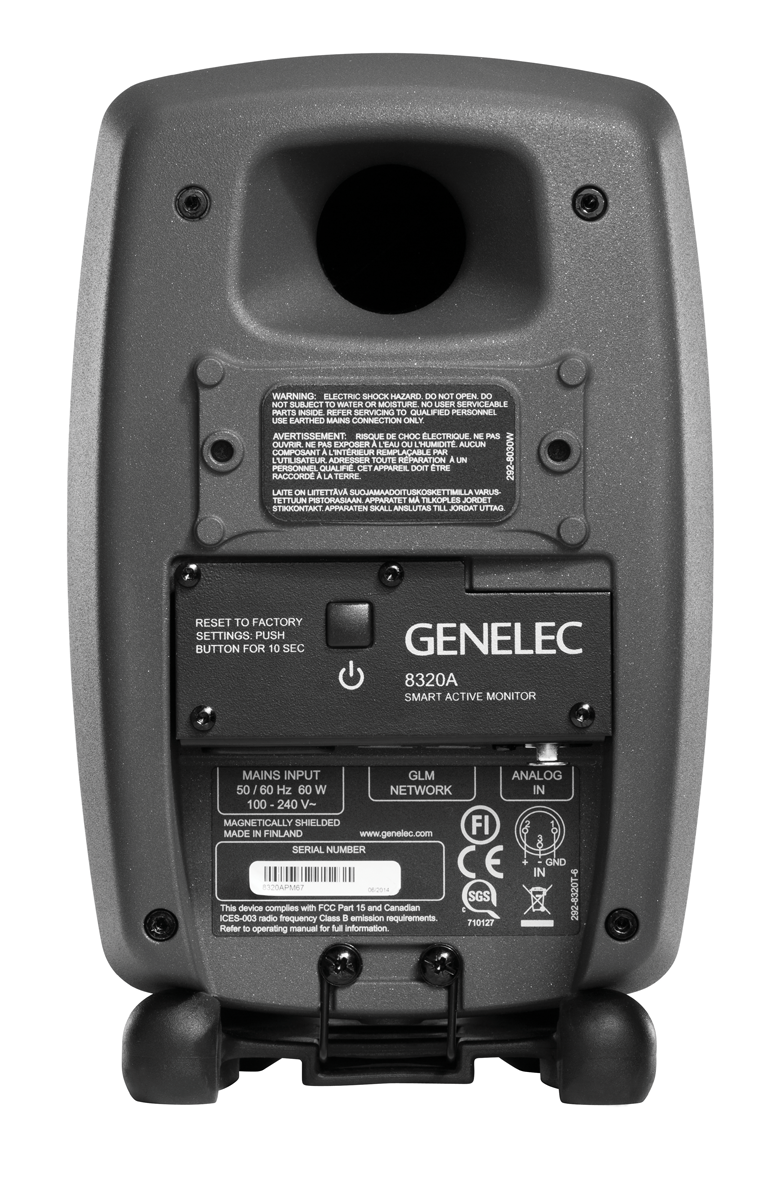 Both Together
Without the calibration engaged, the 8320As sounded fairly similar to our Focal CMS 40s, with detailed mids and plenty of natural room ambience. Since both are pro-quality products with similarly sized components, this was to be expected.

In the event, the 8320As had the opened-out treble response commonly associated with Genelec, and the Focals had a sweeter and fuller midrange. The differences were more apparent with the 8330As, because the low end sounded a bit loose and wallowy without the calibration. However, this also highlighted the fact that the 8330A goes noticeably lower into the bass.

Initial attempts at calibration were limited to single-point measurements, but on the advice of Genelec’s tech specialist, we re-calibrated using multiple mic positions. Response files are kept on every Genelec measurement microphone, so whichever microphone you use, the serial number should show up in the calibration software window. For the most accurate calibration, select the serial-number option rather than the default mic setting.

Our single-point calibrations produced slightly underwhelming results. The bass response was certainly tighter and there was no trace of boominess.

On the other hand, most of our test tracks sounded slightly thin and lacking in low-mid drive through the compensated 8320As and 8330As, compared to other monitors. In essence, they were lacking punch and vibe.

Multi-point calibration produced far more effective and enjoyable results. Flicking the bypass button on and off produced far less dramatic results than before, but the bass end combined a more energetic and natural feel, with improved tightness and clarity

The extent to which the calibration is noticeable depends to some extent on the programme material. Besides some tightening in the bass, regular acoustic music and even rock recordings didn’t sound substantially different with the SAM system engaged in our room. However, music with prominent kick drums and dubby bass lines sounded much improved with the calibration. Bass notes had a reduced tendency to pop out of the mix and the more subtle tonal qualities of kick drums were far easier to discern. 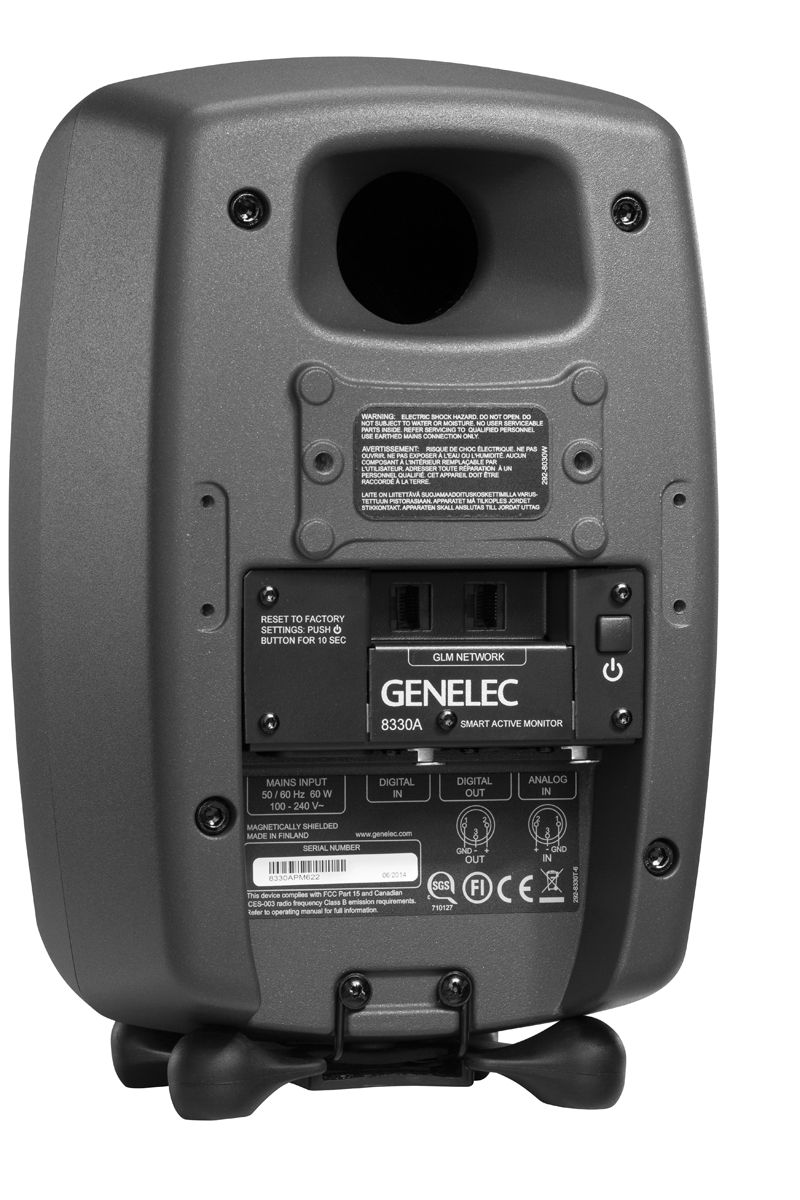 The 833oA has additional XLR/digital AES/EBU output, and extra capacity for bass

Lending an Ear
Another handy tip provided by Genelec’s tech specialist was to fine-tune the calibrated response by ear. Clicking on the speaker icons reveals the frequency response and correction graphs.

All the computer-generated settings can be altered individually and we applied a bit of treble roll off, because the stock response tended to accentuate reverb tails into a slightly washy haze. The result of all this automated calibration and fine-tuning was two sets of monitors that sounded excellent in our test room.

For its size, the 8320A performs really well, providing very detailed and transparent monitoring down to a point. However, you’d need to combine it with a subwoofer for full frequency coverage. The 8330A goes quite a bit deeper, but the feature we particularly like is its full and natural midrange.

In Use Tip
Genelec’s graphical interface almost walks you through the setup procedure. Speaker icons are dragged onto a grid and you can position them to approximate your monitoring setup. The microphone is sensed by the software and individual response files are loaded from the database. With both single- and multi-point calibration procedures, the system requires you to double-click on the microphone icon that corresponds to the current position of the microphone relative to the speakers.

This triggers a series of sine-wave sweeps, which the system uses to gauge the room characteristics and make the necessary corrections to the speaker response.

Alternatives
Complete speaker systems that ship with calibration kits are thin on the ground at this price point.

Summing Up…
Both speakers score highly for openness and realism of the sound stage, and the walk-in clarity. In this regard, they’re among the few monitors that give our regular monitors a run for their money. Every mix element seemed to occupy a distinct space within a precisely conveyed stereo picture.

While Genelec’s literature makes it clear the SAM system shouldn’t be regarded as a workaround for rooms that are acoustically poor, it certainly allowed both these monitors to perform at their best in our room. Although both monitors are available without the calibration system, we think you’d be crazy not to buy one without the other. 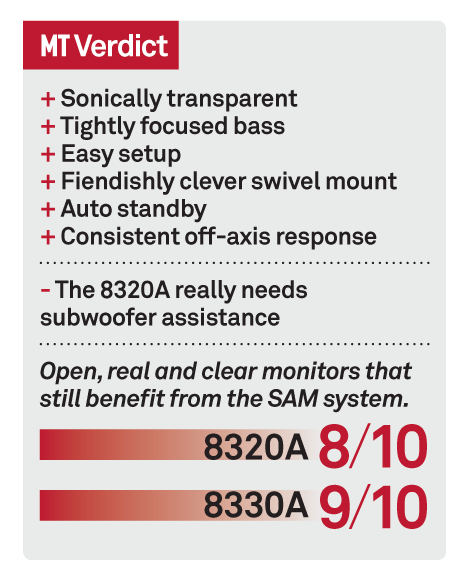