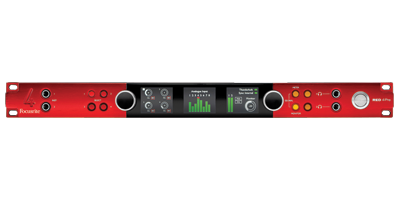 The Focusrite Red range has always been at the top of the recording pile. Mike Hillier checks out the Red 4Pre interface…

The Focusrite Red series comprises a selection of some of Focusrite’s most sought-after equipment, from the Red 1 preamp, to the Red 2 EQ and of course the Red 3, Chris Lord Alge’s favourite buss compressor. We’ve recently seen Focusrite take another look at this range with the Red 500 mic preamp for 500-series, and now it has launched an audio interface, the Red 4pre, into this range.

The Red 4Pre interface combines the Red series styling with an almost encyclopedic collection of interfacing options. On the analogue side, the Red 4Pre has four Red Evolution mic preamps; the latest generation of the Red Series preamp design, two high-impedance instrument inputs; and a further eight line inputs on a D-Sub (it should be noted that you can only use eight analogue inputs at any one time).

On the output side, there are two TRS main monitor outputs, an additional eight-channel line-level D-Sub output, and two independently routable headphone outputs.

On the digital side, the Red 4Pre has 16 channels of ADAT I/O, two channels of S/PDIF I/O, in addition to dual DigiLink ports, dual Dante ports and dual Thunderbolt ports. Focusrite was leaving no stone unturned, bringing the total I/O on the Red 4Pre to a potential 58 in and 64 out! Whatever you have in your studio, the Red 4Pre aims to be at the centre connecting it to your DAW.

If your studio isn’t yet kitted out with Dante, DigiLink or even ADAT or S/PDIF equipment, the Red 4Pre may look a little like overkill. Much of this unit’s interfacing on is based around these digital options, but even just relying on the analogue I/O options it is still a formidable beast; however, the total I/O count comes down to a more conventional eight-in and 14-out (including the two headphone outputs). And you can always upgrade your studio in the future to make use of the additional digital I/O, adding a Focusrite ISA828 for a further eight channels of mic preamps via ADAT.

For obvious reasons, the majority of the I/O on the Red 4Pre is on the back panel. However, the two instrument inputs and two headphone outputs are both found on the front panel. While the bulk of the front panel is taken up by two banks of four buttons, two rotary encoders and three LCD panels which provide visual feedback on inputs and outputs.

Visually, the Red 4Pre is stunning. The red-and-black colour scheme looks great in the studio rack and watching the meters dance around gives an encouraging quick visual cue as to what is going on where.

The front panel controls are fairly simplistic in use, providing access to the most useful functions, but everything can also be reached using the Focusrite Control console software. This software can also be used to create custom mixes for each of the outputs and headphone mixes.

As this routing is all done inside the box, latency ceases to be an issue, even when you’re working with plug-ins and virtual instruments.

In addition to all the various I/O options, the big attraction on the Red 4Pre is the four preamps. The Red Evolution preamps are not the same as those found in the Red 1 Quad pre or Red 500 preamps, but a next-generation preamp, built with low noise in mind and with a new ‘Air’ feature, which aims to recreate the sound of older transformer-based preamps.

Engaging the ‘Air’ effect isn’t simply a case of routing the audio through some DSP processing inside the unit; it actually changes the input impedance of the mic preamp, and alters the frequency response in the analogue domain.

We were recording a low contralto female vocal part, so set up the Red 4Pre in the studio and installed the accompanying software. Having two independent headphone outputs and options to route audio directly from the inputs to the headphone mixes using the control software meant we were able to quickly setup a ‘more me’ mix for the artist while we listened in context and without the additional reverb on a separate set of headphones.

We’re often fond of a dynamic mic on this kind of dark moody vocal, but in this instance, the vocal and mic pairing were sounding a little murky. Before switching to a brighter condenser mic we engaged the Air mode, which definitely brought out a more refined finish to the vocal, closer to what we were looking for.

With a large diaphragm condenser, the mic had the top-end covered, and engaging the Air mode simply brought out a slightly scratchy presence to the vocal. Our eventual preference was for the dynamic mic with the Air mode engaged.

Next up, we tried an acoustic guitar, setting up a pair of small diaphragm condensers in a coincident pair arrangement. Using the Focusrite Control software, we then linked the inputs, and were able to quickly gain stage the two microphones, and compare the difference between having the Air on and off.

With Air off, the sound was very natural, you could make out every finger movement from the left-hand slides to the sound of the nails of the right hand tapping against the strings. The detail was incredible, but it didn’t seem hyped, or forced in any sense. Engaging the Air band brought an entirely new character.

The stereo field seemed slightly less detailed, but the little push in the upper mids brought the strings forward in a very musical fashion. We could easily see ourselves using both of these modes in different recording scenarios.

This ability to quickly and easily alter the character of the mic preamp to better suit the source/mic pairing is really useful. Often we might try two or three mic preamps, but this takes time, setting up the different patches, and lining up the gain staging.

With the Red 4Pre, we can try two options at the flick of a software switch.

Finally, we plugged in our electric guitar to the 1/4-inch hi-Z input on the front panel. Guitars notoriously sound appalling when played completely clean, and this was no exception. So we dialled in our favourite tone on the UAD Fender ’55 Tweed Deluxe.

We’ve been playing with this amp sim a lot lately, with a variety of DI options. The sim has a great bluesey bite, which sounds great with our Strat. Those same recordings which sounded bright and thin with no amp sim, immediately sounded smooth, and full of tone. The dynamics of the recording shine through, and there’s a little more top-end compared with our Radial J48 DI.

Picking the right audio interface for your studio is a very personal decision, based around the equipment you have, intend to get and the music that you make. The Red 4Pre is incredibly well equipped with options: many of these may prove to be redundant in many studios and so you may be better off with a more focused interface.

The mic preamps are high quality and the Air mode is an interesting option, which is a lot like having a second set of preamps in your interface to choose from. So even if you don’t need all the extra interfacing, the Red 4Pre still deserves to be on the shortlist of any high-end audio interfacing decisions.

The front of the 4Pre has three LCD screens to keep you informed, plus the instrument inputs and headphone outputs

Not Just a Pretty Face

Bundled with the Red 4Pre are Focusrite’s Red 2 EQ and Red 3 compressor plug-ins, as well as the Softube Time and Tone bundle. While one or two other emulations of the Red 2 and Red 3 exist, they don’t enjoy the same kind of ubiquity that other units from that era have.

The EQ is a four-band parametric, and is useful as both a channel and buss EQ, while the compressor is something of a secret-weapon tool when placed across the mix or drums buss.

The Softube Time And Tone bundle consists of the Drawmer S73 Intelligent Master Processor, TSAR-1R reverb, Tube Delay and Saturation plug-ins. These four – along with the two Focusrite plug-ins – give you an excellent starting point, and could be considered as an upgrade to many DAW built-in plug-in collections.

If you’re just starting out, the Red 4Pre and the bundled plug-ins give you everything you need to track and mix your music, but the DAW itself. It could be argued that the Red 4Pre is overkill for someone starting out, but it’s exceptionally high quality, and expandable, which means that you won’t want to upgrade for a long time to come, and when you do, you can add to your existing system rather than scrap it entirely.

The option to work with Pro Tools HD/HDX cards is a nice touch, and of course, if you have any Dante equipment in your studio, you will already know the benefits of being able to hook up your studio using standard Ethernet cable, especially if you’re running multiple studios all hooked together, as is the case in many broadcast and education facilities. 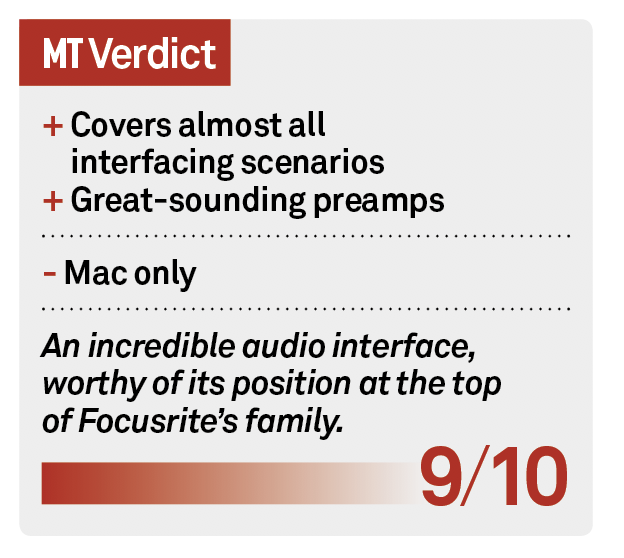