Focusrite has relaunched the Red 1 preamp as a 500-Series module. Mike Hillier packs his Lunchbox… Details Price £799 Contact Focusrite – 01494 462246 Web www.focusrite.com Amazon.co.uk Widgets The Focusrite Red range took its circuitry straight from the Focusrite Studio Consoles of the early 1990s and were a huge hit among tracking engineers at the time. […] 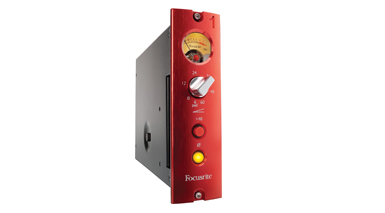 Focusrite has relaunched the Red 1 preamp as a 500-Series module. Mike Hillier packs his Lunchbox…

The Focusrite Red range took its circuitry straight from the Focusrite Studio Consoles of the early 1990s and were a huge hit among tracking engineers at the time. The Red 1 500 is essentially a single channel from the original four-channel Red 1 2U outboard mic preamp.

Like the original, the Red 1 500 has a fairly minimal feature set, providing a single knob for between -6dB (removing the need for a separate pad switch) and +60dB gain. The gain knob is switched in 6dB steps for accurate channel-matching and recall. Below the gain knob is a red 48v phantom power switch and a yellow polarity-invert switch. The only remaining feature on the Red 1 500 is the porthole-style VU meter, providing quick visual feedback of signal levels.

Inside the Red 1 500 are the same Lundahl LL1538 input and custom Carnhill output transformers as the original Red 1 units, ensuring not only the same wide bandwidth as the original (Focusrite boasts near-linear response from 10Hz–140kHz), but also the same large headroom for coping with loud transients.

Tracking Guitars
We dropped the Red 1 500 into our Lunchbox alongside our CAPI VP28 and Avedis MA5 and took it along to a guitar tracking session. Using a Shure SM57 on subtly overdriven picked electric guitar, the Red 1 captured a strong, bright tone, with more upper harmonics than either the VP28 or MA5. The VP28 stood forward a little more, with plenty of strong mid frequencies, while the MA5 had a darker tone that was actually our favourite of the bunch on this particular sound.

Switching to heavy, distorted guitars, the Red 1 demonstrated plenty of bass and a biting top end that really brought the guitar tone forward – quite different from the mid-present VP28 sound, which while still heavy in the low end had a more aggressive midrange and a slightly less present top end that pushed the guitars a little further back. The MA5 was the softest-sounding of the three, with a similarly distant sound to the VP28 but with more focus on the low end than the midrange.

On acoustic guitar, the extended high end of the Red 1 really helped to bring out the natural sound of the instrument. The recording had tremendous clarity, a strong low end and more detail than any of the other preamp choices. For complex picked acoustic guitar patterns the Red 1 500 would easily have been our favourite choice from these preamps, while for more brash, strummed acoustic guitar, the big, bold bass coming from the Red 1 500 would still put it into competition with the other two. However, in busier mixes the VP28 probably has the edge thanks to its more forward midrange and the useful high-pass filter options.

On Song
At a vocal tracking session we shot-out the Red 1 500 against a Neve 1081 and again against our VP28. The VP28 has a very rock-friendly sound but isn’t smooth enough for most other genres and we were quick to drop it from the shoot-out, but the Red 1 and 1081 both had characteristics that we loved for our vocal track. The Red 1 had slightly more low end than the 1081 as well as a gorgeously open top end. The Neve, by comparison, was a little smoother, with less of an extended, open top end. The Red 1 also seemed a little clearer, and in the end was our preamp of choice for this vocal session. 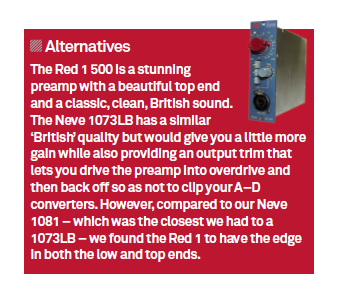 Because of the switched gain control, we would be interested in getting a pair of Red 1s for stereo recording. And because there is also a fixed unity gain point, we could see ourselves using a pair as an outboard saturation effect, simply feeding signals – even the master buss – out through the preamps and back in for a little colouration (although don’t expect to get much saturation out of the Red 1 as it’s a very clean circuit). The only real problem we can foresee coming up against is the fairly low amount of gain available when paired with older ribbon mics. However, this problem can be easily remedied by using an inline preamp such as the Cloudlifter CL1 before the Red 1 to get an extra 25dB of gain. 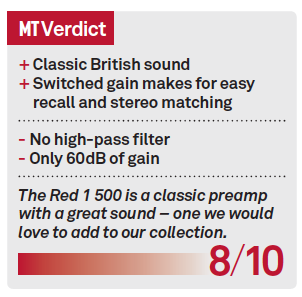