Focusrite’s latest high-end interfaces not only look stunning but are touted as ‘better, faster and easier’ with new Control software to boot. Andy Jones checks out the new 8Pre… Details Price £899 Contact Focusrite T: +44 1494 462246 E: sales@focusrite.com W: http://uk.focusrite.com/ Focusrite does a good interface, we all know that. We also know that the […] 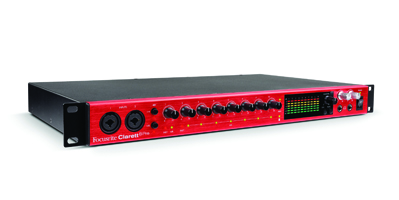 Focusrite’s latest high-end interfaces not only look stunning but are touted as ‘better, faster and easier’ with new Control software to boot. Andy Jones checks out the new 8Pre…

Focusrite does a good interface, we all know that. We also know that the company does a lot of interfaces so perhaps a quick recap is in order before we jump in to look at its latest, the Clarett 8Pre.

Broadly speaking, Focusrite splits its ranges by interface protocol, so the Forte, iTrack and Scarlett ranges are all USB2.0; the Saffire all FireWire 400/800 (with a Thunderbolt option); the Clarett (on test here) is Thunderbolt only; while Rednet is Ethernet. I’ve made that sound quite simple, but anomalies and additions do crop up: the Saffire 6 is USB and there’s the iOS standard, which Focusrite has covered with iTrack Solo and iTrack Dock. Like I say, easy.

So Clarett is Thunderbolt only, and the future: a superfast connection standard present on later Macs (Windows compatibility on the way) including the Mac I’m testing it with.

There’s no Thunderbolt cable present in the box and I’ve moaned about lack of cables with Focusrite gear in the past (Saffire PRO required a FireWire to Thunderbolt one). The company states that including one will add too much to the price so would rather leave this optional purchase up to the user.

Slick, slim and detailed, the Clarret 8Pre front panel has the now usual two inputs for channels 1 and 2 and level controls for 8 inputs and mic pres with corresponding LEDS.

Software Too
We also need to talk interfacing software too. As you probably know, most interfaces come with a layer of software that sits between your DAW and interface, a necessary evil, I always say. This is, after all, the only software the interface manufacturer can control as the DAW itself is produced by one of a dozen other companies.

This software, then, should provide you with a stable environment within which to control and route your audio from and to your interface and DAW. In Clarett’s case it’s the newly-updated Control software, which certainly looks slicker than the Saffire MixControl software I’m used to. So, lots to cover…

In Use
The 8Pre has 18 audio inputs and 20 outs with eight analogue ins and 10 outs plus eight ADAT I/Os and stereo S/PDIF I/O making up the remainder. Channels 7 to 10 are shared with both headphone outs – each with independent rotaries and front panel connections. Inputs 1 and 2 are also located on the front panel and eight rotaries next to these control input levels across the eight analogue ins.

It’s a flexible recording beast for multiple mic set-ups, with the eight mic pres able to take up all sorts of duties: from drum kit to complete band recording, or, as with me, simply having a bunch of analogue gear plugged into and playing alongside my soft synths.

With a host of outputs combined with the Control software, you can route pretty much any in with any out, so set monitor mixes for different players or have a couple of separate headphone mixes – easily enough connectivity and routing flexibility for lots of scenarios.

Getting Clarett up and running was almost stupidly straightforward with my MacBook running Logic Pro 10.2. I downloaded the latest version of the Control software (1.0.2 at time of writing) and Logic picked up the device straightaway.

A quick firmware update and we were good to go – a surprisingly quick process compared to some of my experiences with other interfaces (including, it has to be said one of Focusrite’s older Saffires) where a certain amount of ordering of power-ups might be required to get software and hardware talking. Not here, though; the outputs on Clarett’s screen were flickering with Logic’s straight away.

Focusrite Control is a big improvement over MixControl in terms of looks. It is clean, almost app-like in nature – you can see it transferring to an iPad easily. The layout is straightforward with outputs running top (monitors) to bottom (ADAT) on the left of the screen. Inputs meanwhile run from left to right with all selectable from a menu to the right. Similarly the 20 DAW playback channels are shown below, again all selectable so you can show as many or as few as you wish.

Device Settings, including monitor set-up and line or instruments inputs for channels 1 and 2, are accessed with the other tab. Again, it’s all very straightforward and a lot more obvious than with other interfacing software.

The other main selling point with Control is the addition of its own plug-in suite of Focusrite Red EQs and compressors, all neatly displayed on screen and to add extra versatility if needed. As good as they are, in truth there other features that now require attention…

Speed v Quality
Clarett is touted as ‘better, faster and easier’. So far it’s scored well on the last point, both in terms of setting up and the software, but what of the other two?

Speed comes down to latency so another recap is in order. We’re talking about the amount of time it takes for a signal to get through an interface and processed by your computer before being spewed out again.

That time depends on your computer, the sample rate (quality) of your audio, and how you set up your buffer size (the lower the better). You may use a higher sample rate so need a large buffer size to handle the extra data (or else your CPU might struggle, resulting in audible crackling).

This means a larger latency and an audible gap betwixt the note pressing and hearing. Not good. There are direct monitor or ultra low latency features that reduce latency but Clarett is Thunderbolt, so a fast connection standard. And the big gain with this kind of speed is the ability to use your DAW plug-ins when recording, so no extra hardware processing is needed…

When testing it, though, there are a lot of variables: number of tracks, effects, processor load etc. And if you are just mixing prerecorded audio, latency isn’t such an issue – only really a factor in live playing or monitoring an input instrument.

I set the interface up with both external instruments and internal Logic soft synths and internal fx processing. In practice, I was able to get it down to 3ms without any problems on a new(ish) Mac, so nothing to worry about at all. Dramatically increasing the buffer size to maximum (which wasn’t actually necessary) resulted in 23ms. Even pushing it with plug-ins heaped on to push the processor didn’t really change the results.

Certainly, in this instance, 8Pre really does make using your DAW plug-ins for real-time latency free recording a reality.
In terms of quality I actually lined Clarett up with a much cheaper option: sister company Novation’s Audio Hub. I also dug out a Prism Titan that we’re looking at thanks to its new found lower price tag, but it is still close to three times the cost of an 8Pre.

In my tests I’d say the Titan edged it for certain tracks – the depth of sound is there and breadth is slightly greater although I’d probably struggle to point one out above another every time in a blind test.

Against the cheaper option the Clarett does have more presence and its mic pres came into their own with some of my analogue gear, transferring the bass brilliantly on my Sub 37. I even dared plug in my new purchase Lewitt microphone – no I’m not thinking of becoming a singer, it’s merely a test item.

The result again was good in a transparent way, little colouration but there seems to be a presence added that is hard to define but very positive and largely thanks to the ‘Air’ sound on the mic pres. This adds a clarity and power to vocals, emulating as it does, Focusrite’s ISA.

Two independant headphone outs also add a great deal of front panel connecting flexibility. Above, around the back you get just as much connection flexibility.

Conclusion
Overall then Clarett does everything it sets out to do and very well. It’s certainly ‘better’ with some great mic pres offering superb recording and the routing software offering the ultimate in recording flexibility. ‘Easier’ too with that Control software taking the strain out of having to use another layer of software with your DAW – I especially like the fact that you can simply display the channels you are using rather than every one, used or otherwise. And finally, ‘faster’?

I’ll admit that my recording tests probably aren’t exhaustive – I’m looking at this as a device to plug multiple instruments into a DAW set-up with less live monitoring needed than some might need – but 8Pre performed admirably well, with zero latency and it will give multi-recordists their speed.

One other thing: Focusrite seems to have nailed any compatibility issues – certainly with Logic – as this interface was as solid as anything during the test (which did involve constantly plugging and unplugging three different interfaces). So a very solid interface for a whole host of applications – very highly recommended indeed 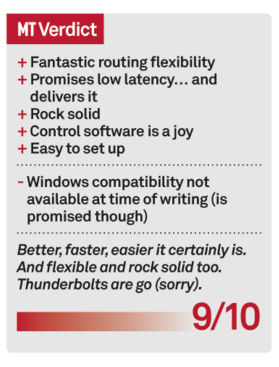