Eventide H9 Update Review – An FX Pedal For Everyone

Eventide’s H9 pedal is a favourite in the world of pedal-based sonic manipulation. Martin Delaney takes a look at the slew of updates that have elevated the H9 to lofty new heights… 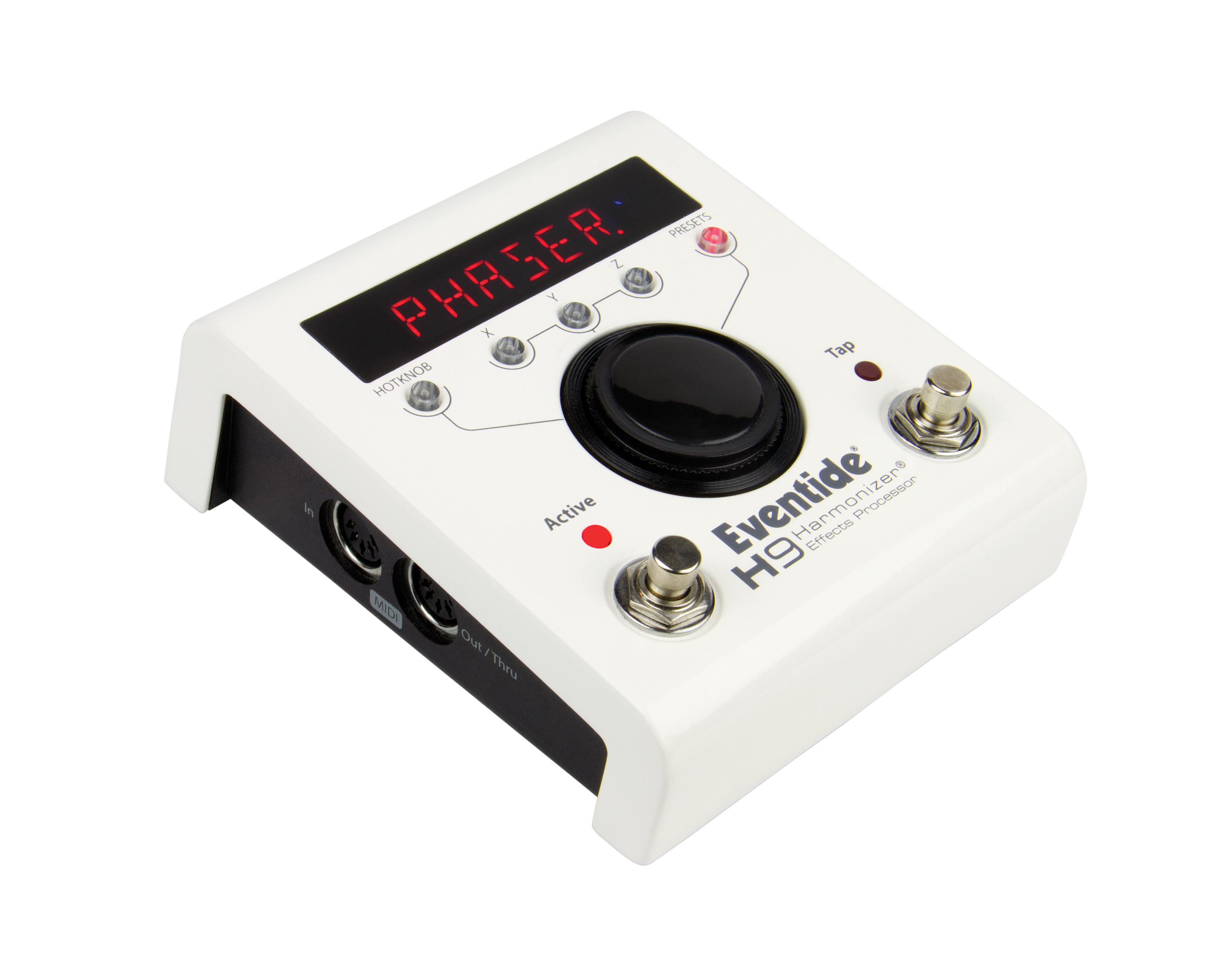 Eventide’s high-end audio gear is traditionally found in 19-inch racks, but in 2007, they launched the Factor series of stompboxes – including Mod, Pitch, Time, and Space – capable of working with instrument- or line-level inputs and fully MIDI specced. These were followed in 2014 by the H9, which is physically smaller, and contains what you might call a Greatest Hits package of Eventide presets, based on harmonisers, delays, and reverbs – although only accessible one at a time.

Since release, the H9 has received four new algorithms (the fundamental elements that presets are derived from), so it seems like a good time to revisit. There are no deep changes to the H9 hardware or operation, so you can research by visiting the MusicTech website and reading our original review for the basic information; for now, we’ll just recap that the H9 has stereo audio in/out, with options to select the input type and to manage levels, an expression-pedal/aux switch input, and a full MIDI spec.

Eventide’s H9 Control app for iOS/Mac/Windows makes it easy to manage presets, and if you’ve got up-to-date firmware on your Factor pedals, you can use the Control app to run those as well, via USB.

Three of the new algorithms add distortion effects, making the H9 even more interesting for guitarists, as well as pretty much anybody who likes to crush beats. Sculpt is a multi-band distortion algorithm that splits high and low frequencies so you can apply different gain and filters to each, and features some of the H9’s best presets, including a few where the filter creates wah and envelope follower effects – just begging to be used with an expression pedal.

CrushStation offers a more diverse range of tools, including drive, EQ, compression, and an octaver, as well as a Sag control which emulates a starved electronic circuit and quickly mashes your precious signal into truly messed up broken-gear hell. And I mean that as a compliment.

This’ll get you anything, from subtle drive to monster distortions. You can’t not use the octaver – it’s immense, and CrushStation immediately became the hub of my guitar setup… except for when I was using it to destroy beats. CrushStation needs tweaking, especially with the Grit control, which applies distortion to the mids, but it pays off. The PitchFuzz algorithm is unusual for the H9, being a true multi-effect algorithm, applying fuzz, pitch-shifters and delays simultaneously.

Personally, I love the fuzz on guitar – who doesn’t? – but not so much on electronic sources. However, the cleaner tones are very useful for synths, for example. The final new algorithm is SpaceTime; again, a combination of effects, with modulation, delay and reverb.

This algorithm doesn’t provide any shockingly new sounds; it’s more about the sheer convenience of having that combination available in recallable form – it might save you a couple of slots on your pedalboard! Apart from the algorithms, the H9 now allows pre/post routing – it’s possible to connect the H9 to the front of a guitar amp at the same time as adding it to an effects loop, and switching between these two routings on a per-preset basis. 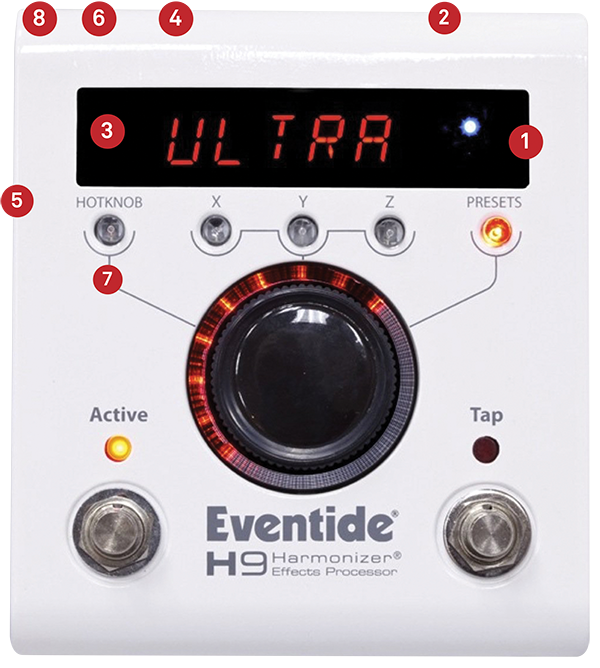 1. Bluetooth
The H9 uses Bluetooth to wirelessly connect to the Control app on your computer or iOS device, or to receive messages from other MIDI software setups without the Control application.

2. Stereo
The H9 has left and right stereo inputs and outputs on 1/4-inch jacks, one of the reasons why it’s so good to use with sound sources other than guitars.

3. Visuals
With the white finish and big LCD display, the H9 looks more surgical or industrial than a typical pedal, but it is still very easy to see and use in darkened environments.

4. Control options
The H9 has an expression-pedal input, which can be assigned to multiple parameters. A footswitch can be used alongside that, if you use a suitable cable to connect them both.

5. MIDI
The H9 has full-size MIDI DIN connectors for input and output, and MIDI can be used to load presets, alter effect parameters, or to backup the contents via SysEx messages.

6. Power
Although it’s theoretically a stompbox, the H9 requires more power than the typical 9V battery can provide – there’s no battery option at all, and it must have a 12V mains power supply.

7. HotKnob
Use this button, or the Control app, to set up the Hot Knob function, essential a recallable snapshot of the current settings – a preset within a preset, you might say.

8. USB at the back
If Bluetooth is being unpredictable or you don’t feel secure using it at a gig, you can connect to your computer via USB and use Eventide’s H9 Control app instead.

During the review period, I used an expression pedal and a footswitch as well as the Control app, and I experimented with using a PitchFactor to send MIDI program changes in order to load presets simultaneously on both stompboxes, which worked great and saved a bit of toe tapping. The knobs on the PitchFactor can even send MIDI CCs to the H9 for parameter changes.

As long as you can live with the sparse physical interface, this is an outstanding example of hardware build quality combined with software-style flexibility. It’s versatile and it sounds fantastic. Of course, you’d be right to be sceptical about a product that relies on a computer application or – perhaps worse – an iOS app for full functionality, but if it comes to it, the H9 can do it all through regular MIDI messages and hardware controllers, and Eventide has been around a long time – if you need to trust anybody, it’s going to be them.

It is costly to buy into the H9 ecosystem, but you’re accessing a huge range of high-quality effects in a small package, which you can take with you as you move from synth rig to guitar rig to studio. Another thing to bear in mind is that if you own an H9 Max, you can purchase a Core and validate all of your algorithms and presets on that as well, while you run them together.

I was very impressed with the H9, and it’s the first review product I’ve purchased for myself in a long time. Highly recommended for the more tech-savvy guitarist or producer, especially with those new distortion algorithms – even if all the H9 did was that, it’d be worth it.

If you like the ways of Eventide, but you need something more focused on a particular type of effect, then why not try the Eventide ‘Factor’ range of stompboxes? With their more functional physical interfaces, the PitchFactor, SpaceFactor, and TimeFactor offer effect-specific functionality. You could also think of the Zoom MS-50G (www.zoom.co.jp) as a lower budget alternative to the Eventides. Zoom’s MS-50G MultiStomp pedal provides amp modelling and up to six simultaneous effects in a single pedal-sized box, powered from batteries or mains.