Erica Synths momentarily steps away from Eurorack to offer a freestanding box of tricks for DJs and synth heads. Dave Gale sweeps some frequencies… 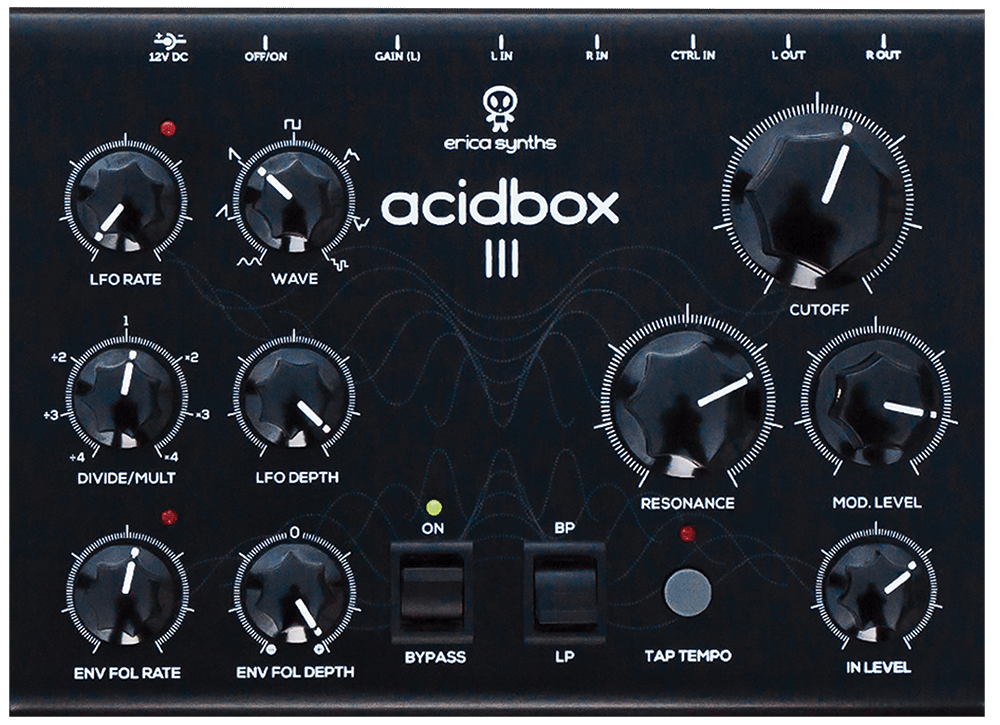 The idea of a standalone box containing a filter is an intriguing prospect, particularly when you consider the popularity of such devices in the production world, so the new acidbox III looks to bring some helpful real-time options to users who want a filter for live use, or fancy having one at hand in the studio.

Being well versed with Erica’s Eurorack offerings, I’ve always been impressed by the quality of its products. They’re well made, with a ruggedness of design which offers assurance when in use – and the acidbox is no different, other than being in a standalone metal box, which gently slopes toward the user. It feels industrial grade, albeit with rounded edges. An external power supply is included, presumably for practicality and to reduce noise.

The main event here is the filter, which is a Polivoks-based design, offering both low-pass and band-pass incarnations, immediately lending itself to some grit and crunch. So my first call was to reach for a drum machine and allow the filter to work some magic. The Cutoff pot is the biggest, closely followed by Resonance, with the Mod. Level pot being smaller still. This subtle, but helpful sizing will be useful in a darkened venue, where the accompanying legends may not be so clear.

The filter has the usual Polivoks character; with all the resonance diminished, there is still a feel of character spiking as you move across the frequencies. It sounds great, with its distinctive grittiness. Increasing resonance introduces some very weighty sinusoidal tones, which move into a state of self oscillation when fully deployed. It’s funny how all self oscillations vary across filters, and there is no denying that here, it’s full of depth. It’s worth mentioning that the In level on the acidbox will overdrive once dialled in above 50% and this can obviously affect the resulting signal considerably, but even backed off, the self oscillation sounds huge. 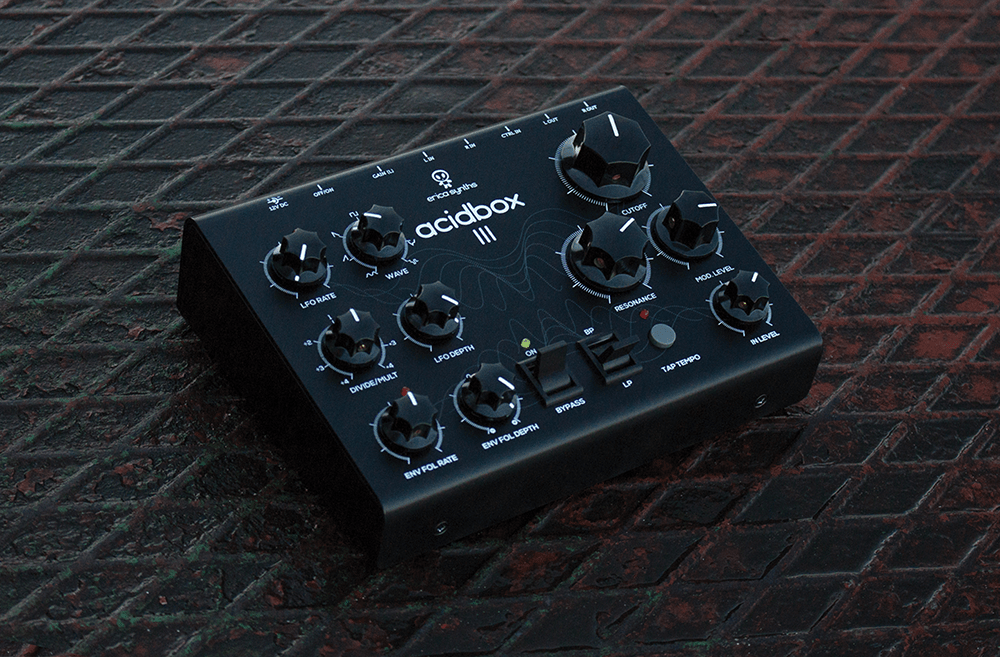 The acidbox III should appeal to many, thanks to its flexibility. On the most basic of levels, the stereo I/O makes it a perfect addition to a DJ rig, where real-time filtering is easy to control and trip in and out, thanks to the Bypass switch. The envelope follower will appeal to live musicians and there is nothing to stop users from using pedals to control elements such as Bypass on the fly.

While, for many, the filter will be the main draw, Erica has included an Envelope Follower and LFO, both located on the left-hand side of the box. The LFO has a generous supply of eight waveforms, which include Saw Ramps in both directions and Random (Sample & Hold), although the waveform-selection pot is a fully rotary affair, where my feeling is that a switched pot might have been more befitting for this purpose.

The rate pot is also fully sweepable, but there is also a Tap Tempo button. Another helpful component here is the clock Divide-Multiply control, which allows the user to immediately knock the clock into a suitable frame, up and down by up to four divisions or multiples. Again, I feel a switched pot would’ve made this feel more exaggerated and controlled, but the sweepable pot located here locks us into the desired clock format swiftly and elegantly enough.

I imagine the reason for a fully sweepable control has something to do with moving quickly through divisions, which would be more difficult with a switched pot. With a healthy dose of filter resonance, very interesting analogue-style kicks were quickly produced, with the ability to introduce the odd real-time fill with the Divide/Mult control.

There’s a helpful Control Input jack on the rear of the acidbox that has a variety of uses, all set via two discreetly mounted rotary switches on the underside. You’ll need a split 1/4-inch jack cable to exploit this, as different control elements are deployed via the tip/ring connections. LFO sync is available alongside control of filter Cutoff, Tap Tempo, Bypass and more. 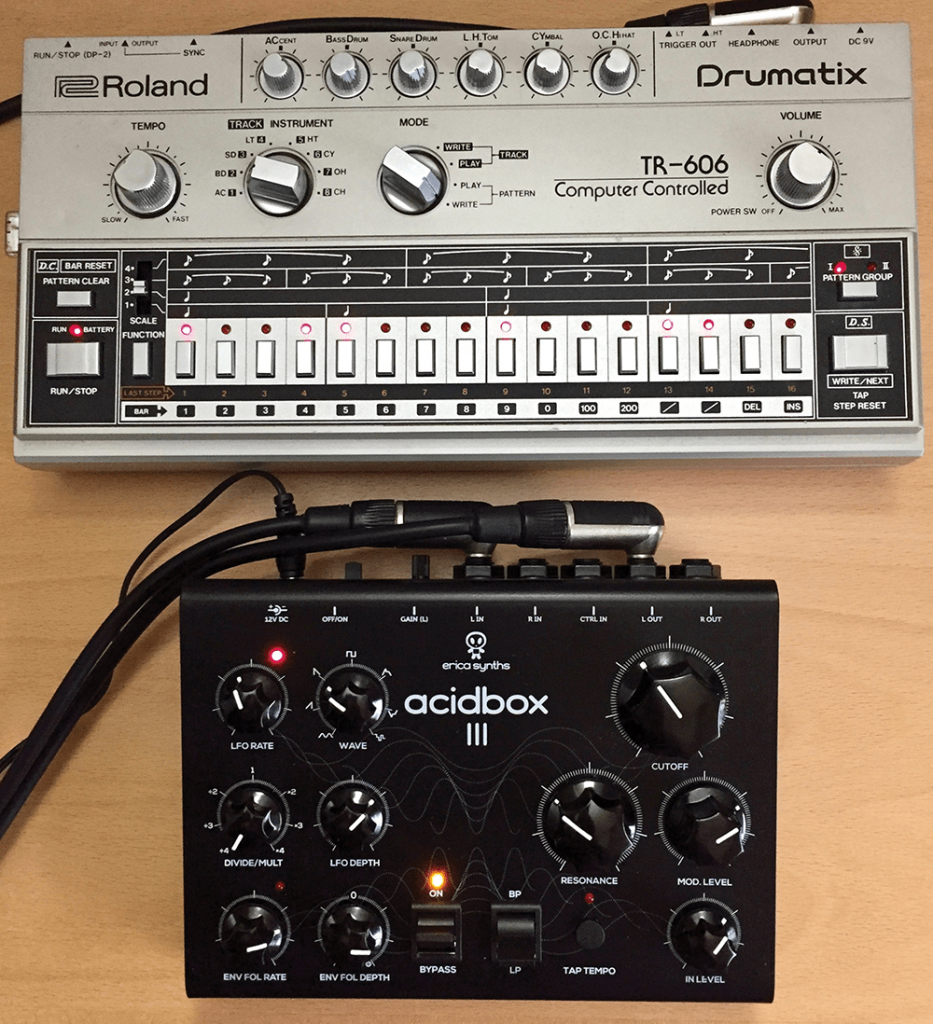 Helpfully, some settings allow for more than one element of control: the Cutoff CV and LFO sync combined being a good case in point. This is a little fiddly; you’ll need some precision with a small flathead screwdriver.

The envelope, on the other hand, is a single-stage-release-style example, with a basic amount of control. The envelope circuit triggers through amplitude following, so classic wah-style effects effortlessly appear when working with heavy transient- based material. Placing the envelope on a trumpet immediately transports you to some 70s-based funk extravaganza.

The Polivoks filter is characterful, with tons of charm, but very dirty with it – and as a useful colour in a number of settings, this could become a very valuable piece of kit for both live and studio work.

Something of a Rolls- Royce of outboard filters, this analogue-based tabletop or rack-mounted device offers plenty of filter options and other niceties such as LFO, envelope-following and distortion. It costs more, but does offer more filtering possibilities. 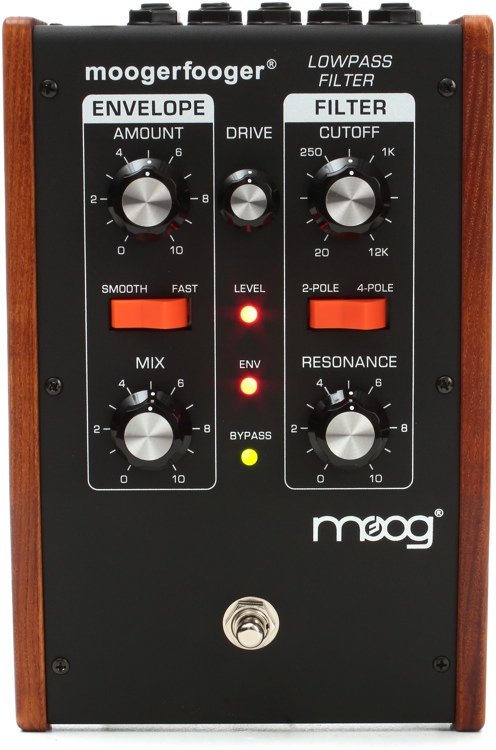 If you want something more classic and subtle, the MoogerFooger could be just the trick. It lacks the LFO, but has an envelope follower and overdrive and will deliver that classic Moog sound in an affordable stompbox.