Korg’s Gadget is one of the best DAWs on the iOS platform, but now everyone can use its instruments in their desktop DAWs. We inspect the bundle… 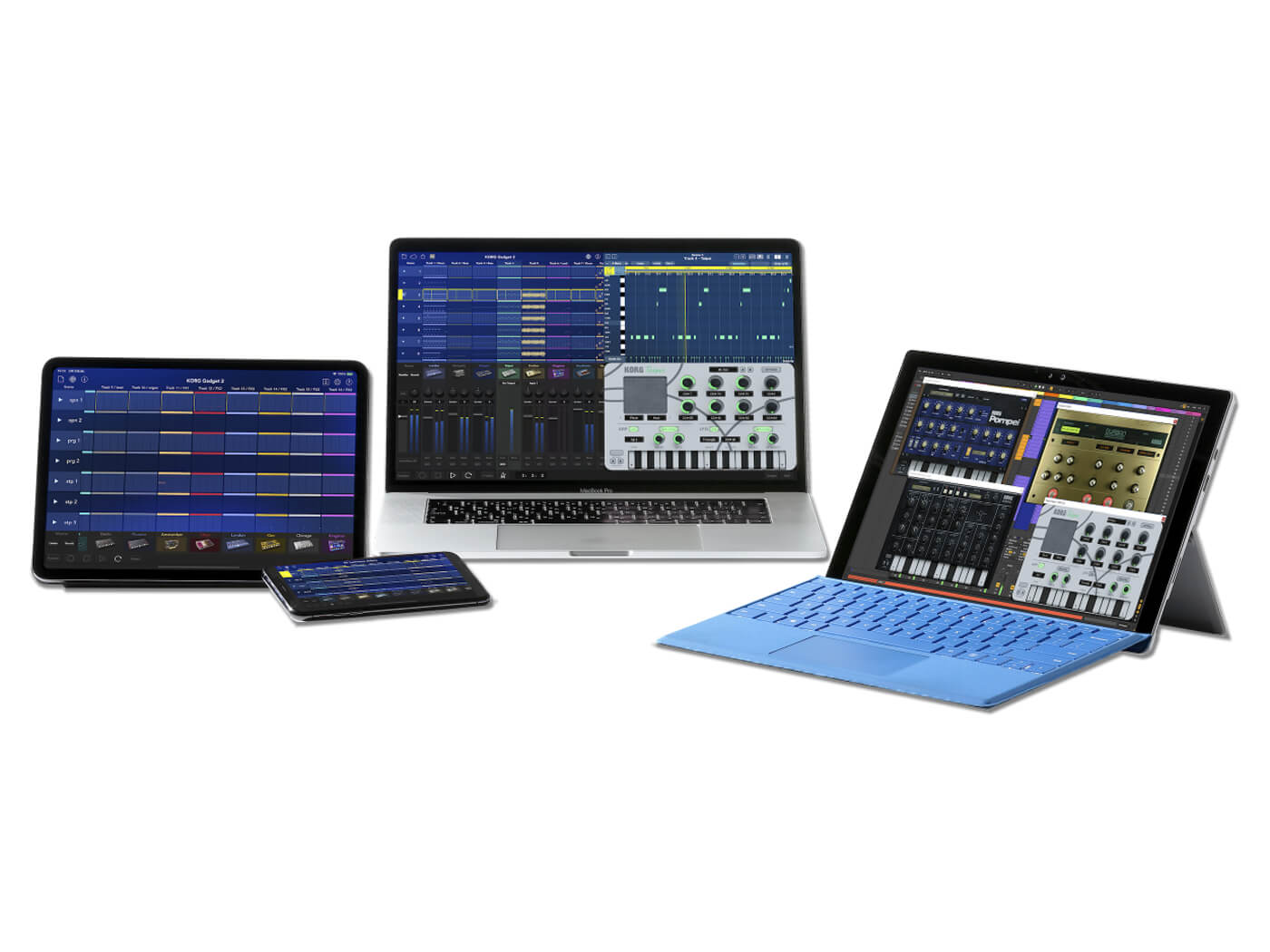 The Korg Gadget ecosphere might seem a little complicated at first, but have no fear, it’s quite simple. Korg’s Gadget first appeared on the iOS platform a few years back, and was the one app that drew me over to the iPad for complete music production. It is still an exceptional DAW, full of mini plug-in synth, sampler and drum instruments – the Gadgets – which specialise in everything from classic Korg sounds to more contemporary drones and bleeps. So easy was it to craft very decent (mostly electronic type) tunes on it, that Korg expanded the Gadget universe to release the DAW for Mac.

The latest Korg Gadget 2 announcement sees updates and additions to both the iOS and Mac versions, but that’s not all. The Gadget collection of instruments and effects is now available as a separate plug-in bundle for both Mac and PC users, who can load it into any DAW and enjoy the Gadget sound. All the Gadgets in the bundle run as normal plug-ins – I have them running in both Live and Logic – so let’s take a look.

I’ll look at the updates to Gadget 2 – the DAW, that is – next time around, but these plug-ins are really what makes it tick and they’re now available to both Mac and PC users via any AU and VST DAW. The bundle is a 3GB-plus download which requires a Korg account and activation code when you boot up the plug-ins for the first time. Otherwise, they simply load in as standard on whichever MIDI track you choose.

The first thing to get your head around when your load in a typical Gadget is that it will usually be smaller in scope than a full-blown plug-in synth – hence the name Gadget. You get fewer controls, less presets and more of a focus on a type of sound or sonic angle. That said, some of them – the ones that emulate some of the Korg classics of days gone by – do deliver a hell of a lot from such a small package and pretty much every Gadget has something dramatic, bold and memorable to say. I’ll start with some of the older ones for those new to the Gadget phenomenon.

Each Gadget is themed and named after a city. You might think the name relates to the music made by each and you might be right. Certainly, Chicago being a 303-like bass synth makes sense given that city’s history with Acid house, but not all seem to have a link; nor does that really matter. Other early Gadgets include the luminous and Tron-looking Brussels, full of in-your-face screams, leads and arpeggiations; Marseille, a PCM-based keys-type instrument with everything from organs to strings and pianos to choirs; and London, a cracking tunable drum module, with plenty of kits, each featuring eight malleable sounds to provide beats for many a genre.

Berlin is a screaming lead synth with an ARP feel – again, you could link it back to that city’s techno, although I could be barking up the wrong thematic tree here. Very different again is Miami, very much a contemporary dance-music synth and very much ‘of Miami’ with LFO-induced wobbling, drones and some great control over them. Finally, in my quick intro to some of the older Gadgets, there are my favourites, which include Tokyo, which has less percussive sounds, but of a potentially more extreme nature; Phoenix, a powerful classic analogue lead synth; Amsterdam, a bonkers SFX beat maker; and finally, two standouts in the form of Kiev and Helsinki, a couple of more ambient and digital synths that I use in just about every one of the many iPad tracks I produce in Gadget.

So you can see the early Gadgets really were a set of instruments that offered what some State-side used to call ‘Electronica’ – an umbrella genre that is very dance influenced, very EDM and very, very electronic. Just my kind of thing, then. They gave Gadget a very specific colour, but all this started to shift as Korg added more Gadgets to the software, in terms of both updates and optional bolt-ons.

These include some absolute historical belters from Korg, which plundered its archives to bring you a MonoPoly by way of the Montpelier Gadget. This is a surprisingly sonically flexible synth, capable of everything from lush atmospheres to slap-face bass and leads. More digital, but no less classic, is the Gadget Darwin, based on the mighty, best-selling (possibly of all time) M1 synth. Not only does this Gadget disprove my ‘cities having something to do with the sound’ theory, it also shifts Gadget’s focus well away from pure analogue electronics. Just load up the Universe preset to transform yourself back to 1988, for better or for worse. It both pleases and cringes in equal measure – some of the sounds are so 80s they really should be consigned to that era, but there are also some fantastic pianos and strings, pads and ‘real’ instruments that are still very useful.

Then there’s Milpitas – thanks Wiki for telling me that is a city in Santa Clara County, California. I knew that, of course, (and, er, its history with the Wavestation). That’s another classic Korg from 20-odd years back that even features a virtual vector joystick for lots of sonic morphing – another highlight, especially for those of us of a certain age. Finally, what has become a Korg classic even though it has the ARP name is the Odyssey, here a Gadget named Lexington (of course) with all of the tearing and unmistakable lead sounds from that classic 70s beast (and its rebuilt Korg equivalent).

Two other Korg classics are included within the group of six additions for version 2. These are the Pompei six-voice Polysix synth – great for bass and leads and classic Korg sounds, but these were not exactly lacking elsewhere – and Memphis, which brings the classic semi-modular MS-20 to the Gadget party. Some true analogue sounds to be had here, without a doubt.

I should also touch on the sampler-type instruments such as Zurich, an audio recorder/player, that allows you to bring your own sounds and styles into the Gadget environment. Fancy some vocals and instrumentation alongside all that electronica? No problem. Incidentally, this is included as an effect, alongside the more recent Durban and Rosario amp sims, so you will access these however you access effects in your DAW channel.

There are some Gadgets that might not hit the mark with you. Vancouver is a kind of Mellotron sampler with waveforms that clearly show your sound progressing but I’m not convinced it has its own ‘thing’ over others; and the more arcade-like or 8-bit Gadgets will inevitably appeal to some folk more than others. But I think you’ll have to agree that Gadget has now grown up to be a varied beast of a bundle, with a Gadget for pretty much everything and, of course, more promised in the future.

These include two still TBA at the time of writing in that group of six V2 additions, and I think it’s fair to say that Korg will be bringing plenty more to the party, either as upgrades or optional purchases.

The Gadget sounds and instruments all come to a DAW near you for $199 (just $149 as I write this) and they are an absolute blast. I loved them in the Gadget DAW and now just as much in Live and Logic. Superb range, superb sounds and a bit of a bargain, too. Not to be missed.

We always say that you should make the most of (and learn) the plug-ins you already own before splashing out on more. Learn them well and don’t let a bloated plug-in collection distract you from music-making. However, when a collection like Gadget 2 comes along, all that goes out the window. You could spend hours of fun just tweaking loading and playing here and they will inspire a lot of creativity. So don’t listen to us being all square. Go for it!