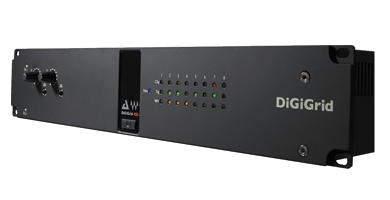 The DigiGrid IOS combines an eight-in, eight-out audio interface with a SoundGrid DSP server. Mike Hillier connects to the Grid…

DiGiGrid is a collaborative effort between DiGiCo/Soundtracs and Waves, combining the former’s hardware expertise with the latter’s software experience to create a networked audio interfacing and processing platform for Mac and PC. The centre-piece of this platform is the DiGiGrid IOS interface, which is one of the most ambitious audio interfaces we’ve seen in a long time.

The DiGiGrid IOS is a 2U interface, which connects to your Mac or PC via Ethernet cable, and provides eight analogue mic/line inputs and eight outputs, plus two headphone outputs – as well as AES/EBU and S/PDIF digital, Wordclock and MIDI I/O. By using Ethernet, rather than a protocol such as USB, FireWire or Thunderbolt, the DiGiGrid is able to communicate with multiple DAWs simultaneously, over large cable runs.

Each of these 1U expansion options connects to the IOS over a single Cat 5e/6 cable, with network switching handled internally by the IOS. MADI and Avid DigiLink options are also available.

In addition to this audio and MIDI I/O, the DiGiGrid IOS hosts a SoundGrid DSP server capable of hosting SoundGrid-compatible plug-ins from Waves. The SoundGrid DSP server is similar to a UAD or Avid HDX system, in that it lets you offload the processing power to a dedicated processor, and requires specific DSP plug-ins to run.

Powering the Grid
As an interface, the IOS doesn’t pull its punches. Each of the eight analogue inputs can be used as a mic or line input via combo XLR/TRS jacks on the rear. The mic preamps, as well as the headphone amps, are the same as those in the DiGiCo SD7 console.

There are no physical controls for any of the mic pres; in fact, the only physical controls are volume knobs on the front panel for each of the two headphone ports. All control over the IOS mic preamps is done from the SoundGrid Studio software, which must be installed on any computers linked to the IOS. The input section of the software lets you allocate 48V phantom power, and has two knobs for controlling gain, one in 7.5dB steps, and the other providing up to an additional 7dB of fine control.

This seems unnecessary in a digital system, on which you should be able to assign any value by typing it in. Alternatively, you can control the preamp from the eMotion ST mixer software, which can also be used for low-latency monitoring. Oddly, some features appear different in the eMotion ST mixer to the SoundGrid Studio. Preamp gain is a single knob in this software, and you also have an option to invert the signal polarity, a feature which seems oddly missing from the SoundGrid Studio application.

Disappointingly, there is no input pad on the mic preamps, although the eMotion Mixer does have a digital trim. But this is of no use if the analogue signal is already clipping on the way in. This absence is doubly curious, considering each of the analogue outputs does have a 10dB pad option.

Alternatives
Universal Audio’s Apollo is proving to be one of the most popular interfaces at present, thanks in no small part to the excellent plug-ins
it can host. The HDX system is the other major alternative, although this comes at no small cost.

Neither the UA Apollo, nor the Avid HDX can be used by multiple systems simultaneously over Ethernet, but some alternative Ethernet-based hosts do exist – such as the Focusrite RedNet systems

Getting on the Grid
With the eMotion Mixer, you can create custom monitor mixes and apply plug-ins using the IOS DSP server. The signal sent to the DAW need not include these plug-ins, so you can – for instance – record a clean, direct signal, while sending a fully processed signal back to the musicians for monitoring – or, of course, you can record the processed signal. In fact, with parallel processing, you could even record the dry and wet signal simultaneously.

This is similar to what you can achieve with the UAD Apollo, but with the SoundGrid DSP you can run considerably more plug-ins at once than even one of the largest UAD systems.

The downside to this, though, is that the plug-ins are not as closely associated with the hardware. On an Apollo, if you use the Neve 1073 preamp, for example, it not only models the saturation of the preamp in software, the hardware preamp impedance changes to match that of a Neve, too. This means your microphone will respond more closely to how it would were it connected to a real Neve 1073.

Whilst on the IOS, you can add an instance of the Waves Scheps 73 to get the saturation and EQ qualities, the preamp remains the same. However, while an Apollo can run only two instances of the Neve 1073 per DSP core (for a total of eight on a UAD-2 Quad, for instance), the DiGiGrid IOS can run 64 instances of the Scheps 73.

The DSP isn’t confined to the eMotion ST mixer, you can also access the DSP from inside your DAW using the Waves StudioRack plug-in, which acts as a host for up to eight plug-ins per instance; and there is no limit on the number of instances you can run, other than the DSP available. Add an instance of StudioRack to each track in your mix and you could have a mix running entirely on the IOS DSP platform.

As all the I/O parameters are controlled digitally, it is possible to save any settings as a preset. A drum session, for instance, can be saved, ready to recall next time you record drums, enabling you to get a similar sound. All your mic preamps will be engaged, with appropriate gain, and
a basic monitor chain set up for the drummer. When tracking vocals, you can recall the mic preamp setting, plus any EQ, compression and reverbs or delays you want on the monitor path.

The DiGiGrid IOS is designed cleverly, to appeal both to the small home studio user and professional studio owners. Eight analogue inputs with built-in mic preamps is likely to be enough for a home studio, and DSP processing will make this a very appealing interface – while larger studios will benefit from the ethernet networking, and will most likely want to expand their system with the IOC expander, adding analogue I/O without the mic preamps for their existing analogue equipment 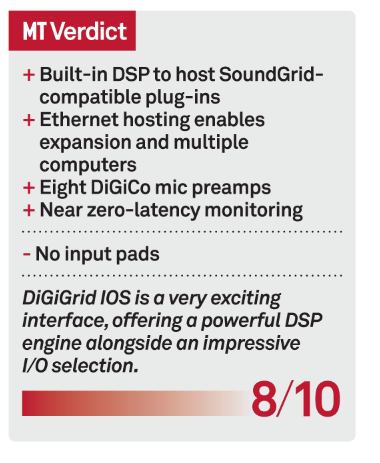