With the convergence of one of the oldest forms of music tech and a long established stalwart, we go hands-free with MIDI control of our synths and DAW. 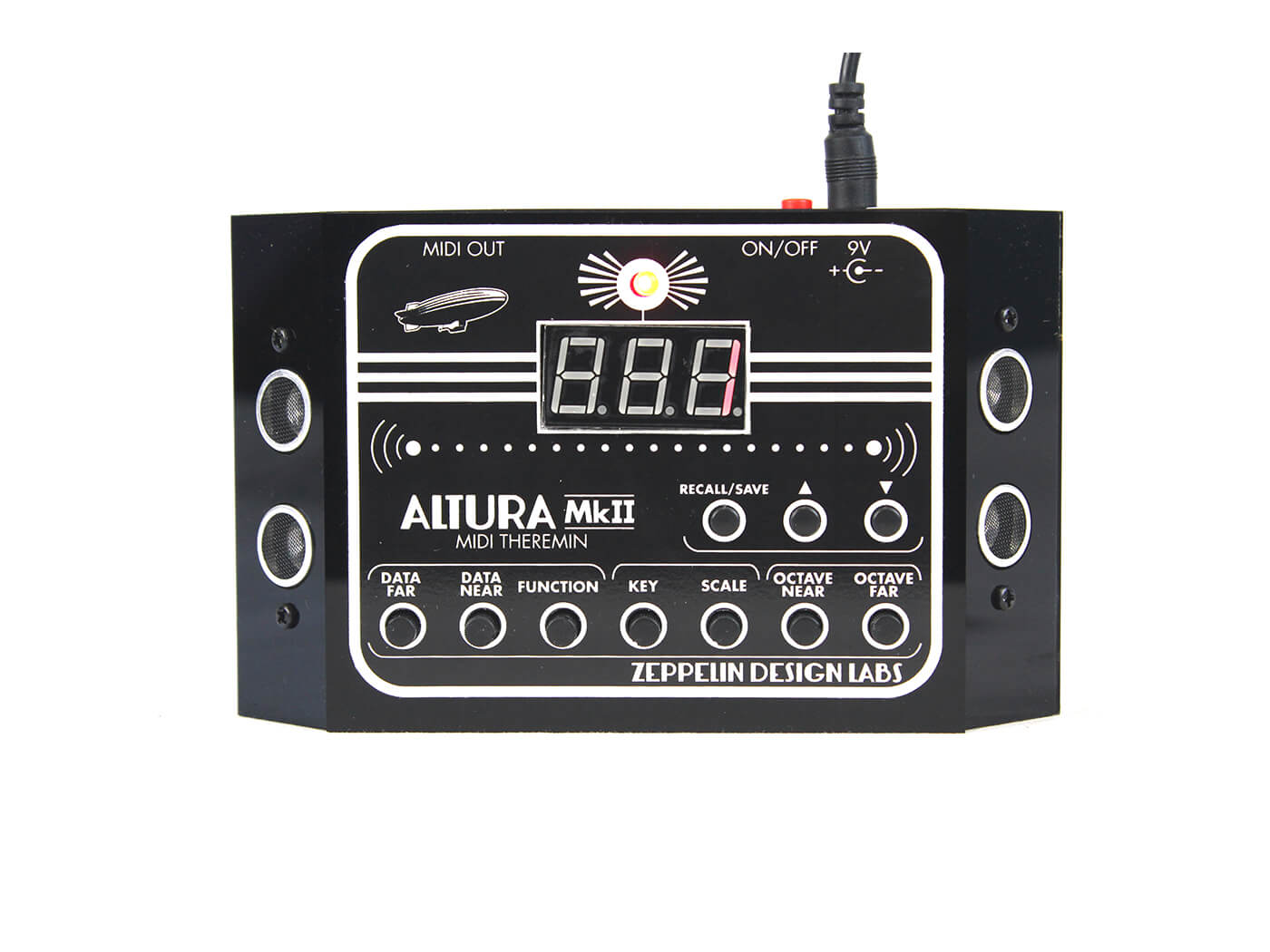 When it comes to the history of music technology, one of the more interesting early instruments was born out of experimentations by KGB scientist Léon Theremin. The legendary instrument known as the theremin first appeared in the 1920s, requiring the performer to wave their hands in front of two antenna to control pitch and volume. This instrument captivated many notable users, from Led Zeppelin and The Beach Boys, through to soundtrack use on films such as The Day The Earth Stood Still, composed by Hollywood legend Bernard Hermann.

Zeppelin Design Labs, from Chicago, has run with the theremin concept and turned it into an affordable unit, which can be easily interfaced with any MIDI-based synthesizer or DAW, ripe for interesting exploitation in a live or studio environment. 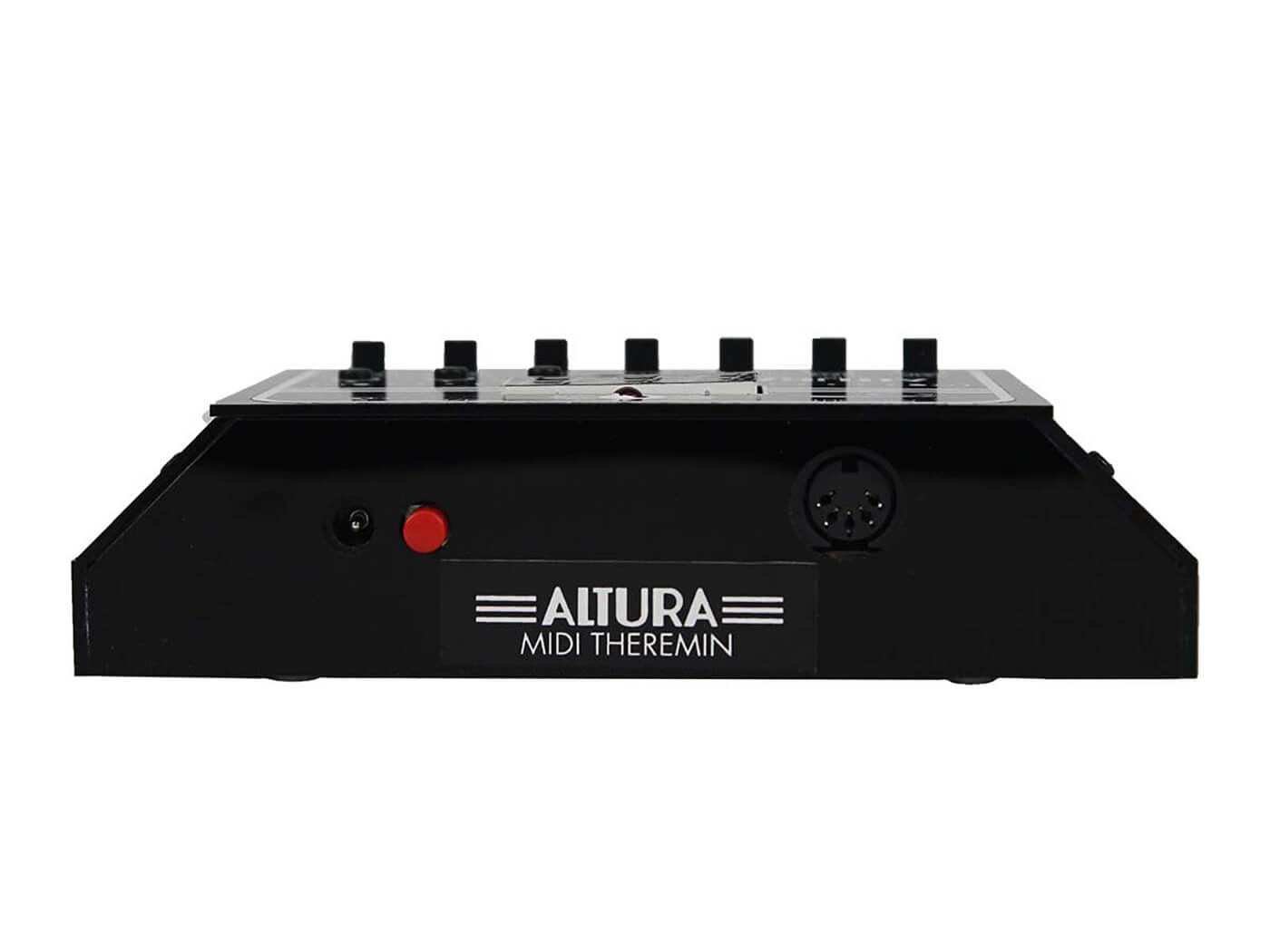 The Altura MIDI Theremin MkII is a pint-sized little package, available in either kit form or ready-made. If purchasing the kit, building will require a fair degree of soldering dexterity, but once complete, the actual theremin’s footprint is a mere 165x100mm, while also being pretty lightweight.

For the theremin newbie, traditional theremins require the player to move their hands in front of (or above) two antenna. The right hand traditionally controls the pitch; the closer your hand gets to the antenna, the higher the pitch goes, with the left hand controlling volume; the further away the left-hand gets from the antenna, the louder it gets. This means that very distinct sounds can be created, often recognised by sweeping portamento between notes. 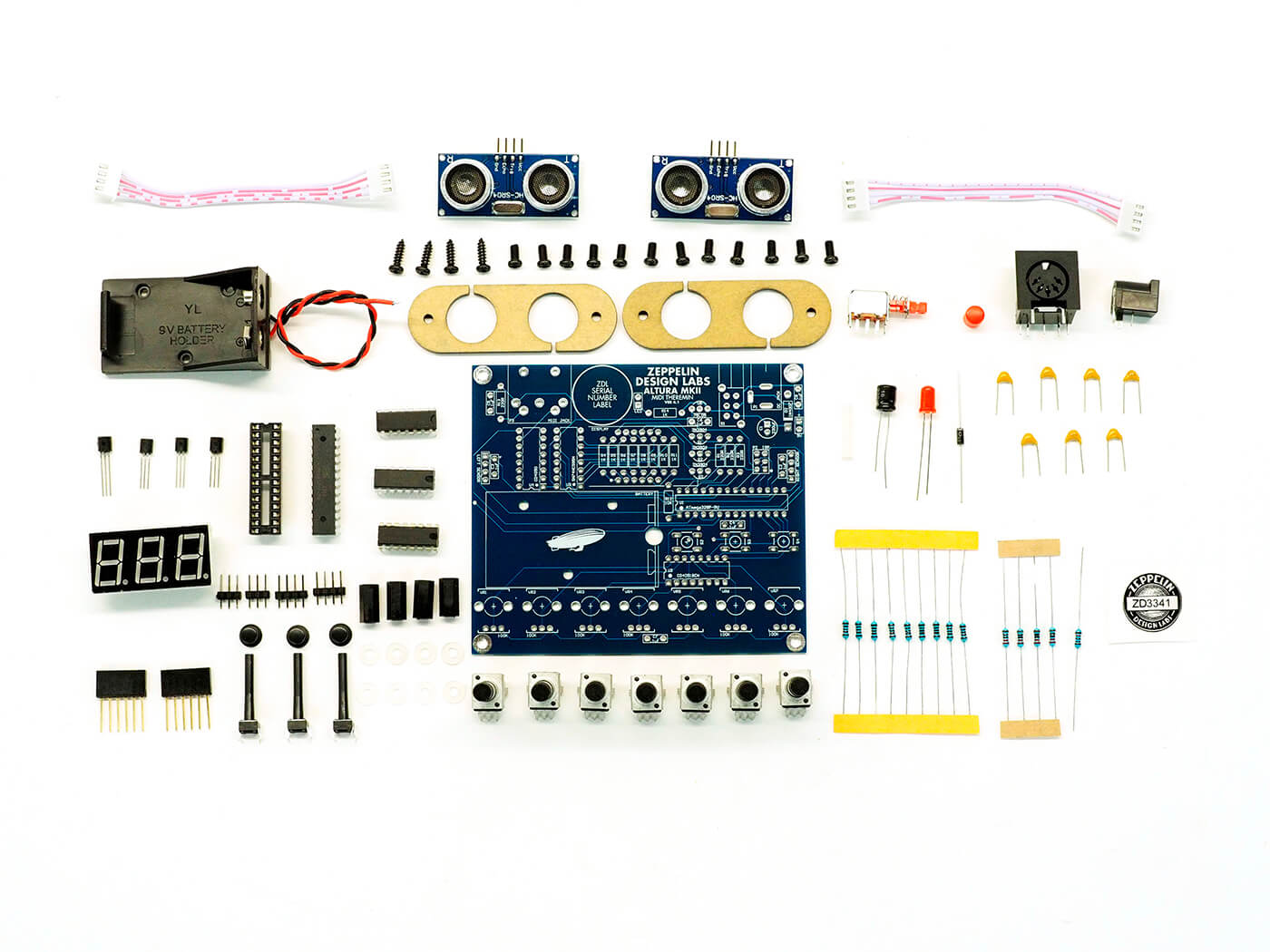 It’s also quite a difficult instrument to play, as there is nothing other than mid-air as a point of reference, which is something I am only too aware of, being a theremin player myself. It’s certainly at the challenging end of musical business.

There are a number of intrinsic differences between the Altura MkII and what you might regard as a conventional theremin. Firstly, it does not make any noise on its own; it is specifically designed to trigger over MIDI, meaning that if you want that traditional theremin sound, you’ll need an appropriate synth to produce it. This in itself is not an issue, but if you already have a relationship with an original or traditional theremin, this is a very different device. 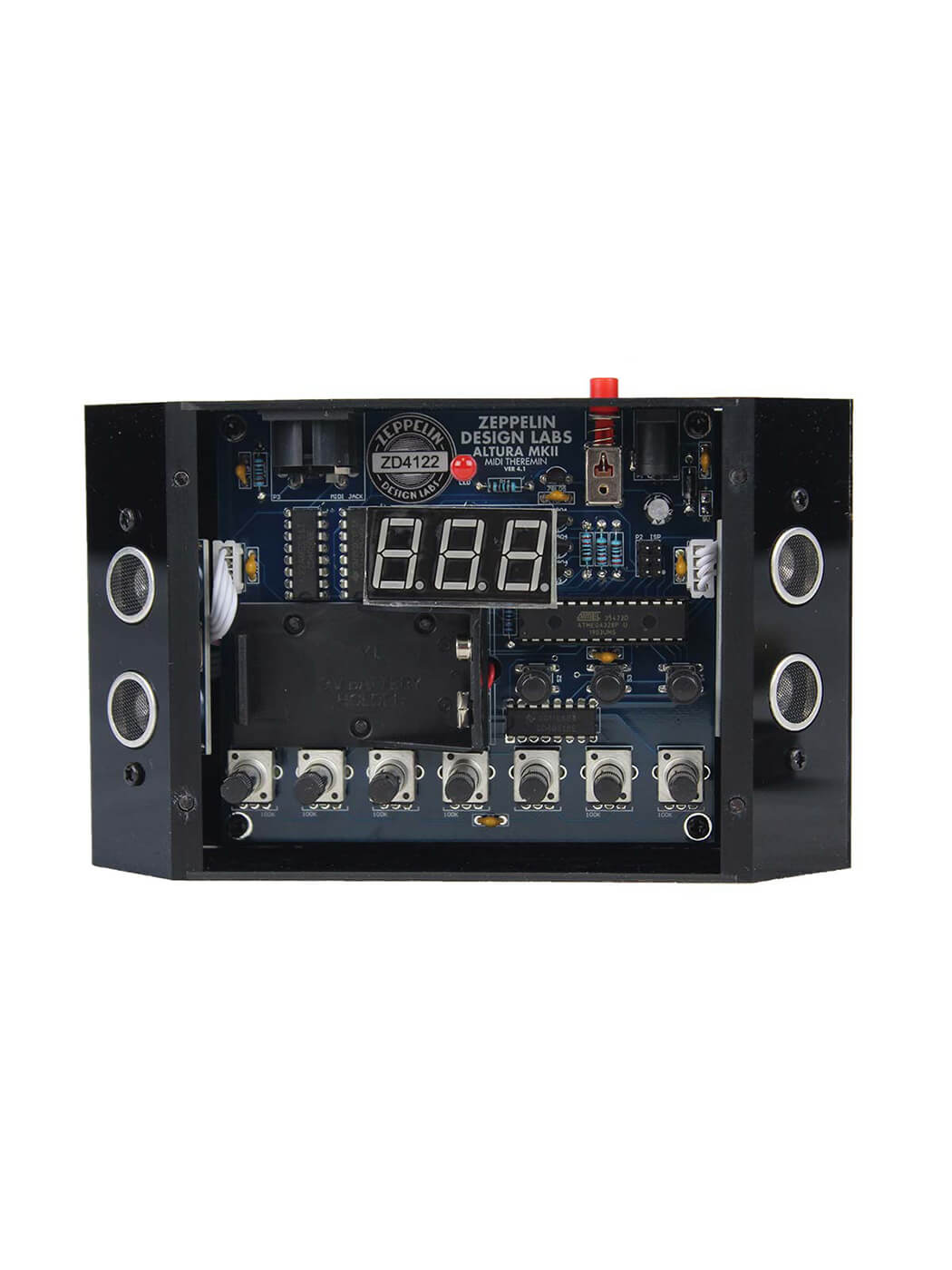 As it conforms to the MIDI protocol, the triggering is cleverly handled by the player’s right hand, while also adjusting pitch. The pitch of notes is also fixed to a scale of the user’s choosing, which will make it easier if you are new to theremin playing, but won’t allow for the linear and fluent pitch control associated with the original.

However, it is still possible to create a synth sound, with plenty of sustain and portamento, which would give you pretty traditional results very easily. This, therefore, means that you will have to consider the suitability of any chosen sound engine, alongside your relationship with the Altura itself.

Zeppelin has been pretty comprehensive about the controls available; as the right hand is doing the donkey work with the pitch (unless you’re a lefty and want to use the unit upside down, which would work fine!) it’s possible to dictate the musical key you wish to be rooted in, choose the scale type that you want to work in and apply the overall MIDI range, which can easily go across a full eight octaves.

The reality is, this is too much for any theremin user, so with a setting closer to two octaves, I start to trigger a synth from within my DAW. Notes are quick to articulate and emerge and I find that lessening the attached decay element of my chosen synth sound reproduces a better theremin-like result for my purposes.

The Altura operates in a slightly different manner to a conventional theremin, by using a sonic pulse which is reflected back at the theremin by your hand. This results in the need to work at a 45-degree angle, which feels odd at first, but quickly becomes easy as an adopted posture. Thanks to numerous possible adjustments, I start to find my feet with the Altura. 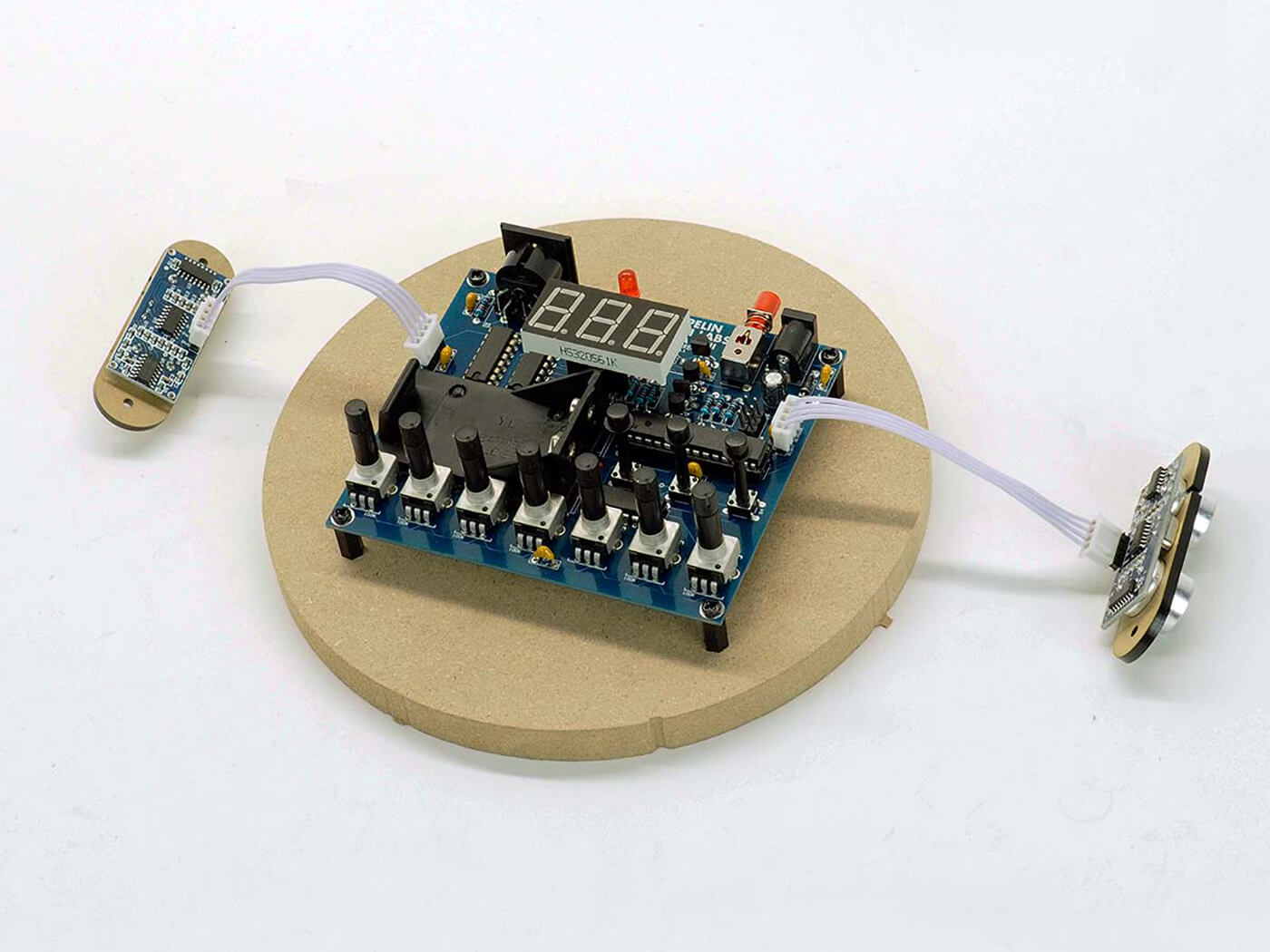 The left-hand side of the Altura operates in a similar physical manner, being played at 45 degrees, but unlike convention, does not strictly control volume. As it conforms to the MIDI protocol, there are various options here, which include MIDI CC 7, should you wish to revert to volume control, but it’s quite fun to consider the other possibilities, which include pitch bend, modulation, velocity amount and even access to an arpeggiator.

The arpeggiator invites levels of multiple-note triggering, in a repeated manner, and even the programming of a sequence, which will be produced on trigger. While keeping control of the notes I am playing, I find the ability to simply double or quadruple the number of notes being triggered via the arpeggiator, in a ratchet-style effect, to be really useful and unusual in a setting of this kind.

To help with recall of any such parameters, the Altura is able to save and reload patches which include saved sequences, making it perfect for both studio and live use.

It doesn’t take me very long to get my head and hands around the Altura MkII, which is testimony to its effectiveness as a well designed and usable piece of kit. Certainly, if you’re not used to playing an instrument of this kind, it would be more of a challenge, but Zeppelin not only includes access to a very well written and entertaining online manual, but has also placed video tutorials online, which will have you up and running in minutes.

Oddly, the limitation of the device is really its endorsement of the MIDI protocol, which is also its endearing feature, as it allows a slightly different and creative angle from a single MIDI output, into whichever device you might choose to use with it.

It’s got a considerable number of flexible setup options, such as a myriad of scales and modes, which will make playing easier. I can see it being exceptionally appealing as a live device, where it could become a real feature for controlling more than just instrumental pitches. 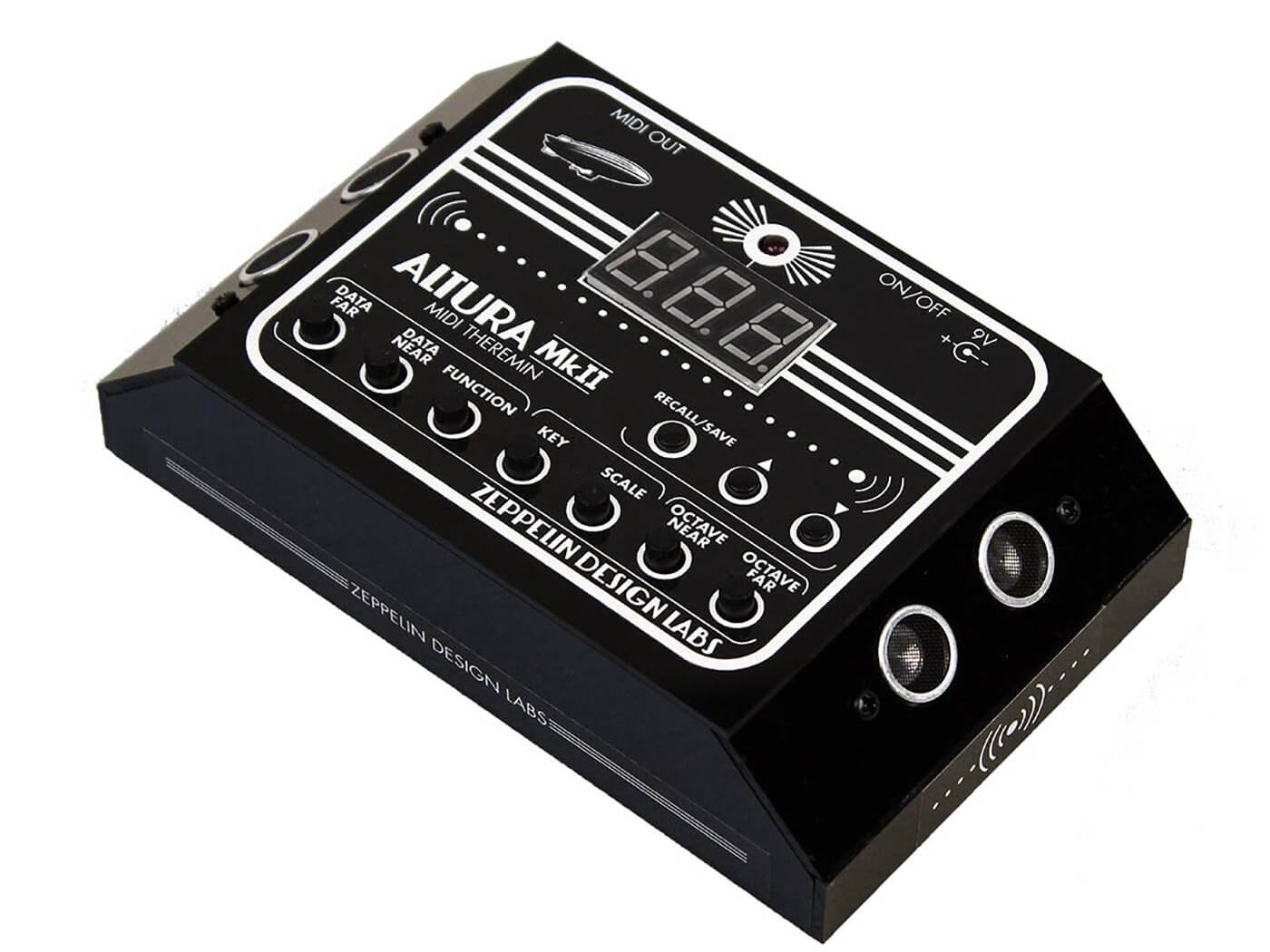 It’s really important to consider this as a musical instrument, with a level of interaction which is unique and different from other instruments. It’s quite important to factor in that you will have to learn how to play it and explore how it interacts with other MIDI-based instruments.

Depending on your dexterity, it’s possible that you will pick it up within a few hours, but as with all musical instruments, practice makes for a perfect performance – and if you want to learn how to play tunes on it, it will take time. Getting arpeggio or scalic effects is a very easy prospect though, as is control of MIDI data, which could be exploited in a number of settings, not least live.

If you like interesting instruments and interfaces, this is a superb unit which is sensibly priced with plenty of playability and the added value of being huge fun to play. Perfect for scratching that theremin itch! Even more so if you fancy a project, building it from kit form. 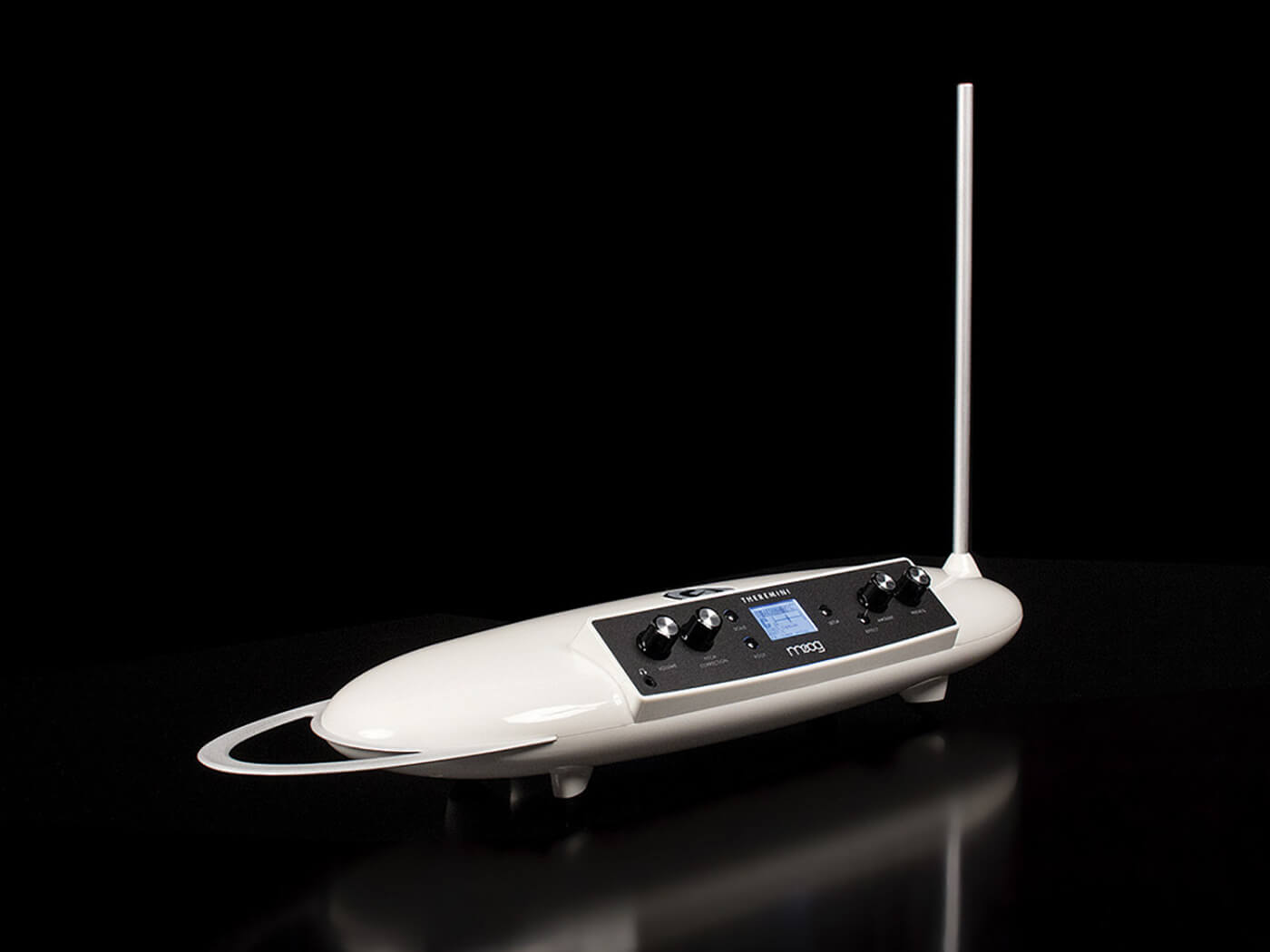 This entry-level theremin exploits the digital Animoog sound engine, along with the more traditional design of the theremin, all packaged in a stylish unit with excellent on-board enhancements that make it ideal for beginners. It also boasts MIDI connectivity via a mini USB connector. 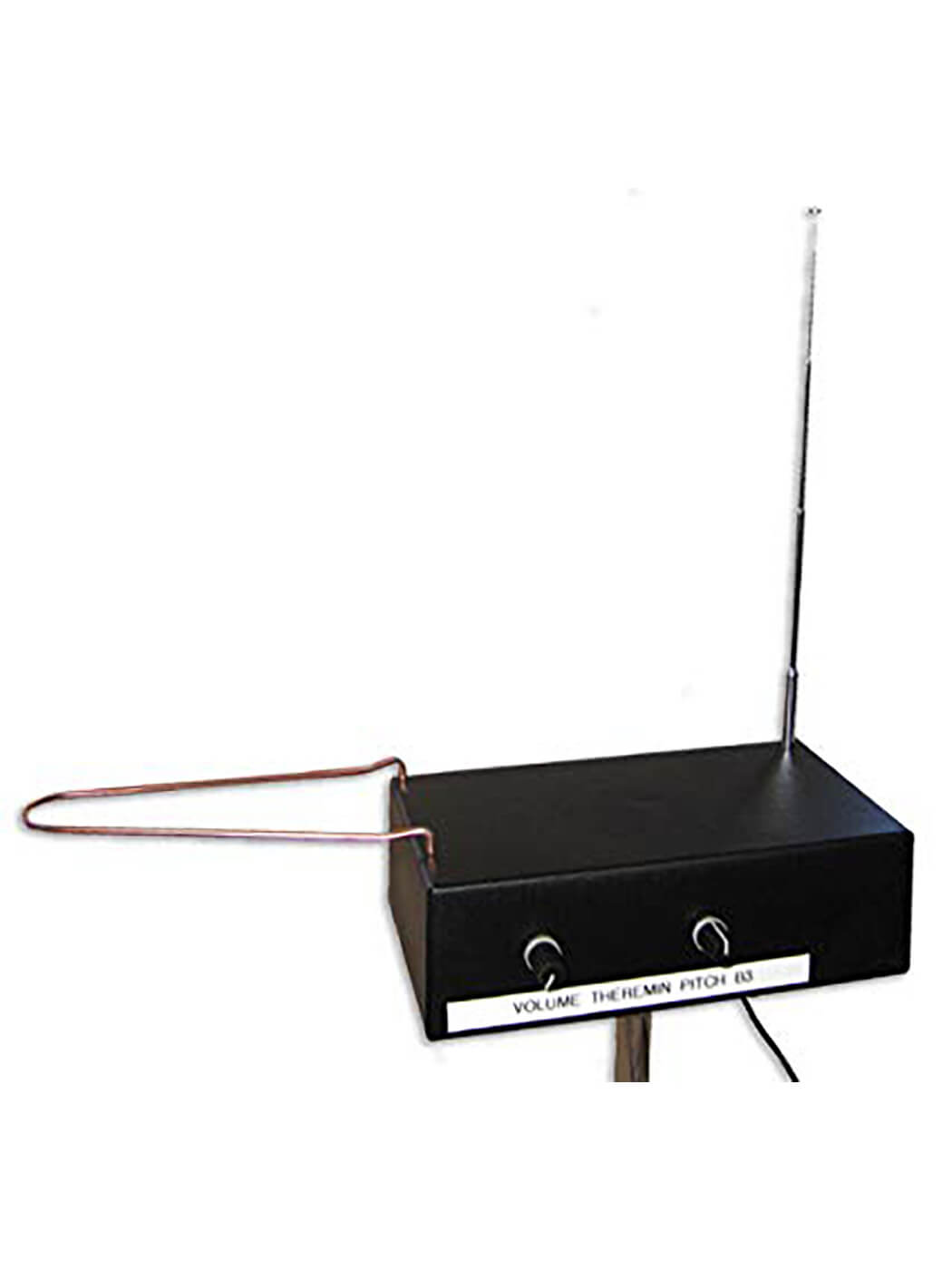 This traditional theremin is more usual in design, from a respected manufacturer. It offers a classic sound, with control delivered through two traditional antenna, for pitch and volume control. It lacks MIDI, as it is designed to be more traditional in sound and performance.