The Chandler REDD.47 mic pre was so popular that it won our Gear Of The Year award. Now, the company with the EMI touch has the follow-up RS124 ready to go. Will John Pickford fall for its charms in a similar way? Details Price £2,749 (including VAT) Contact Nova Distribution, 0203 589 2530 Web www.chandlerlimited.com […] 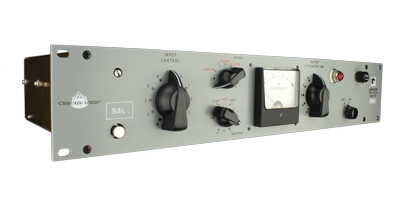 The Chandler REDD.47 mic pre was so popular that it won our Gear Of The Year award. Now, the company with the EMI touch has the follow-up RS124 ready to go. Will John Pickford fall for its charms in a similar way?

Hot on the heels of its REDD.47 microphone preamplifier, winner of a coveted Music Tech Outboard Of The Year award, Chandler Ltd has released the second of its units based on the valve gear used at EMI’s Abbey Road studios throughout the 1960s and beyond – the RS124 compressor.

Back in the day, EMI was justifiably known by its slogan – The Greatest Recording Organisation In The World – and who could argue with that? Not only did it build its own equipment, it also produced some of the finest classical orchestral recordings and filled the pop charts with innovative records by the leading artists of the day, not least The Beatles.

There’s no getting away from the fact that many potential customers for the RS124 will want one (or more) of these units precisely because of its association with the Fab Four. It’s this association that has made the Fairchild 660 limiter the most sought after and expensive vintage dynamics processor on the planet. The RS124 isn’t as well known as the 660 because it was never produced commercially, making it much more rare than its famous cousin.

The 660’s use on Beatles records has been well documented in the past, contributing to the group’s vocal sound and, from 1966’s groundbreaking Revolver album onwards, the sound of Ringo Starr’s drums.

What is less well known is the contribution EMI’s RS124 made to the The Beatles’ sound. It was used when tracking guitar, piano, sitar, mellotron and all manner of strings, brass and woodwind. It also served as a mix-buss compressor and was employed in Abbey Road’s mastering and disc-cutting rooms.

Before we examine Chandler’s RS124 in detail, let’s look at the origins of the unit. In 1959, EMI acquired several American-made Altec 436B compressors. In their original form, the Altecs did not meet with EMI’s high standards of technical excellence, so the company’s technical team of Len Page, Bill Livy and Mike Bachelor comprehensively modified the basic units to create, in effect, a brand-new compressor – the RS124.

The units soon became popular with the engineers at Abbey Road who, despite the fact that the compressors were essentially an EMI design, always referred to them as ‘the Altecs’, because the American company’s logo was displayed on the RS124’s VU meter.

Bringing us up to date, Chandler Limited has, in the company’s own words, ‘re-imagined’ the RS124 to meet the demands of the 21st century. So, this new RS124 isn’t an exact clone of the original, rather it retains the style, feel and unique controls of the originals, while offering additional features that are better suited for modern recording practice.

Finished in period-correct grey and sporting authentic chicken-head style knobs, the RS124 is a single-channel (mono) unit housed in a conventional 2U, 19-inch rack mountable case. A ¼-inch jack connector is provided on the rear of the unit, to link two units for stereo processing; for stereo operation, both units must be set up the same. Standard models come with continuously variable Input and Output controls. However, Chandler offers stepped controls, as per the original design, at additional cost. Our review samples came with the stepped controls, making precise set up for stereo processing simple.

In-Use Tip
The RS124 performs best when used heavily. In fact, when low compression levels are dialled in (2 or 3 dBs), negative thumping effects can occur, so keep the VU meter’s needle ticking beyond 5dB or so for better results.

As the unit is disinclined to pump, due to its even-handed nature, more compression than might normally be advisable can be dialled in without causing audio havoc. Sub-groups and mix busses are best processed in standard mode, while the SuperFuse setting is excellent for injecting some punch to instruments and, in particular, vocal tracks.

Features
Original RS124s did not feature an Attack control – the initial response time was fixed. However, no two units were identical and EMI’s engineers would favour particular units for various applications. In a nod to modernity, Chandler has incorporated a nine-position stepped Attack control, which includes three settings based upon the response times of historic units still in use at Abbey Road.

The compressor’s release control (labelled ‘Recovery’ for historical accuracy) offers six response times, from fast to slow, via a stepped switch. Chandler Limited doesn’t publish response times for attack or release, which doesn’t matter, as the unit’s behaviour is interdependent of the chosen attack and release times.

The unique feature of the Recovery control is a Hold setting, found between each of the release settings. This feature, as explained in original 1960s EMI documents, offered: “a very long recovery time to prevent increase in gain on silent sections.”

In other words, when a mix was heavily compressed, as much as 30dB at times, the compressor could be put into Hold mode to prevent unwanted ambient noise rising at the end of a track. Another useful trick that this feature performs is to prime the compressor, by sending through audio in order to set the desired level of compression, then switching in the Hold setting before restarting the track.

This prevents spikes from initial transients that may escape uncompressed due to the unit’s naturally slow attack time. Once the audio has begun, the unit can be taken out of Hold mode and into an adjacent release setting.

A new feature of the modern RS124 is the SuperFuse mode, selected by turning the switch disguised as a fuse cap on the upper right of the unit’s front panel (a genuine fuse cap houses a 25-amp Slow-Blow fuse at the rear of the unit).

Chandler is somewhat cagey about this feature’s inner workings (something to do with impedance perhaps?), however, engaging SuperFuse turns the unit into another beast altogether, producing a far more aggressive effect, more suited to modern production styles.

Before we report on the RS124’s performance, two more features should be pointed out. Firstly, a silver button marked Bal is provided to allow users to balance the unit’s push/pull circuit for optimum performance; the user manual explains this feature in detail.

Secondly, a toggle switch on the rear panel allows selection of either 200 or 600 ohms output impedance. EMI’s equipment was optimised for 200 ohms; however, the 600-ohms setting should be considered standard for modern usage.

Alternatives
The RS124 is quite unlike most compressors currently available. However, Thermionic Culture’s Phoenix HG15 (£1,872) is another single-channel valve processor with unique features. Its high gain enables it to be used as a mic-pre as well as a compressor, and its Presence and Air EQ controls make it an excellent tracking device that is truly superb with vocal tracks.

Summing Up
We used our review pair of RS124s for a wide variety of applications, with superb results. Its first task was to compress a bass guitar during a tracking session, as original units were favoured for this task in the 1960s.

It would’ve been nice to have a Hofner violin bass or Rickenbacker 4001S, like Paul McCartney often used, but I had to make do with a Fender bass amplified through a Fender Bassman. McCartney sometimes used this setup during later Beatles sessions for the ‘White Album’ and Abbey Road. We mic’d the cabinet with an AKG C414, a descendant of the AKG C12, the preferred bass mic of Beatles’ engineer Geoff Emerick.

With many modern compressor designs, it’s common to take it easy with compression levels, especially when tracking, taming peaks by a few dBs; however, the RS124 works best at levels that may seem extreme to some.

We selected the attack time originally fixed for EMI’s original unit numbered 61010B coupled with Recovery position 4 and achieved a lovely smooth, warm and even sound with the VU meter’s needle hovering around the 15dB mark, sometimes nudging 20dB.

Don’t be frightened by these levels – the RS124 thrives on this level of compression and will not squeeze the life out of signals as many lesser designs would. The Hold feature was useful here, priming the unit so that the initial transient didn’t appear too much louder than the body of the tone.

Next, we strapped the unit across a vocal track mic’d with our valve Neumann U67 amplified by Thermionic Culture’s Rooster 2, a preamp with a similar bold-yet-rich character as Chandler’s REDD.47. In Standard mode, the unit levelled the signal well enough. However, when we switched in the SuperFuse, the sound became much punchier, with more grip and presence, rather like a Fairchild, in fact.

Most impressive of all, though, was the pair’s performance when used across the stereo mix buss. Even with reasonably high compression levels,
the RS124 didn’t produce any nasty artefacts such as pumping, instead providing a gorgeous, full-bodied sound with just the right amount of glue
to transform the final mix into a radio-ready master.

Chandler Limited’s new version of Abbey Road Studios’ classic RS124 will appeal to a certain type of music producer and engineer. Producers of bass-heavy electronica might prefer the vice-like grip of a solid-state VCA compressor, ideally with a high-pass filter. Those with a love of vintage sounds from the 1960s and 1970s however, should check out this wonderful re-creation at once.