In a world where we seem to be going hardware synth mad, do we need another dance-based subtractive soft synth? Andy Jones plugs in to Carbon Electra…   Details Price $99/£59 Contact Plugin Boutique Web www.pluginboutique.com The world has gone, it must be said, a little hardware nuts. While at one time we all thought […] 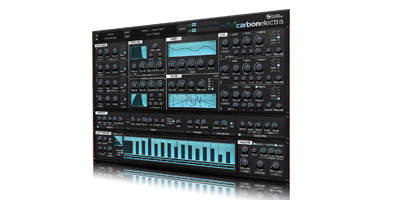 In a world where we seem to be going hardware synth mad, do we need another dance-based subtractive soft synth? Andy Jones plugs in to Carbon Electra… 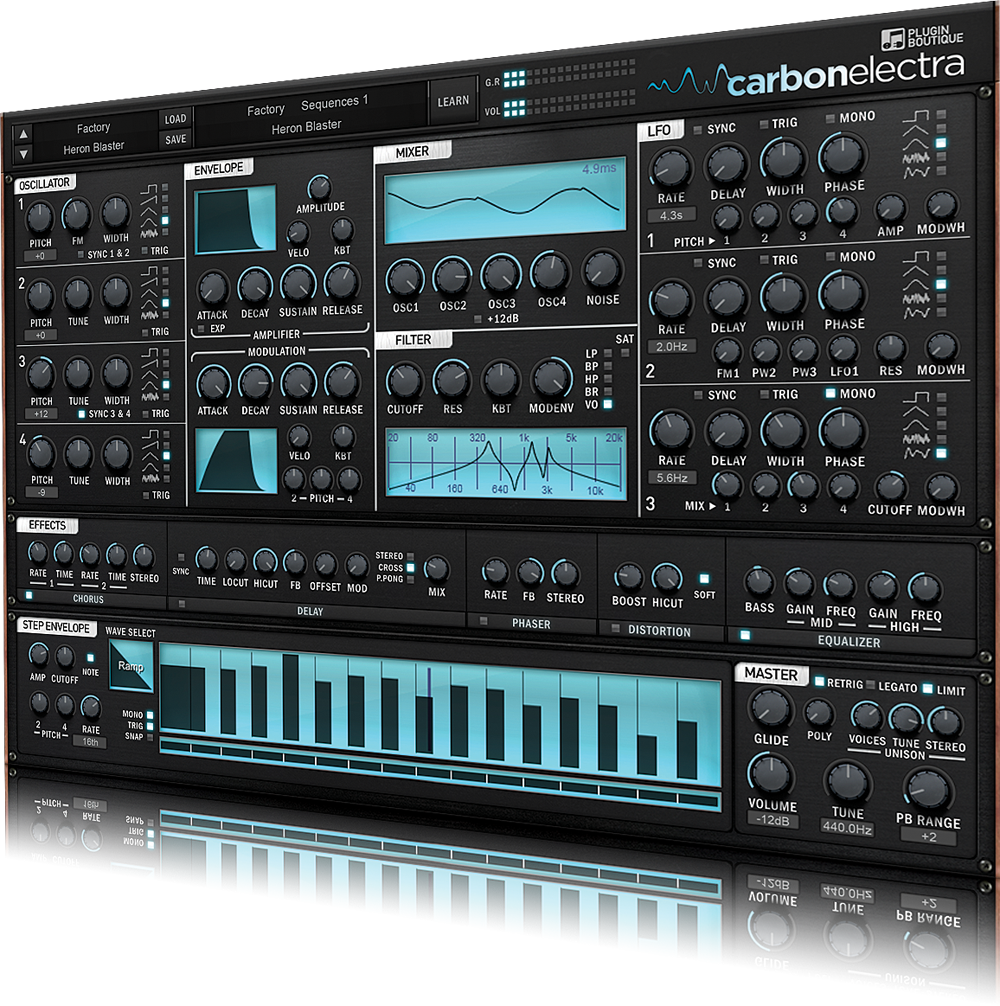 The world has gone, it must be said, a little hardware nuts. While at one time we all thought that everything studio-wise was heading into our laptops, we now find that there is a huge and somewhat unexplained appetite for hardware.

It’s almost as if people don’t realise that you can do music production pretty well all on a laptop. Or that they do realise it and, well, they simply don’t want to. Or there’s the theory that is growing in popularity that music production has simply become more of a hobby that looks amazing; the cool aesthetic of the environment being as important as the process and end result (and in some cases, a little more so…).

Whatever the reason, hardware is most definitely back, especially hardware synths. So you’d have to have a pretty good story to launch a soft synth now. Yet with VirtualCZ, Plugin Boutique had just that when I reviewed it a few months back: a great emulation of a classic synth series that few had attempted. But do we really need another soft synth with an analogue bent and a subtractive heart? And do we need another synth – hard or soft – with dance music as its focus?

Carbon Copy
I first approached Carbon Electra slightly blind, I have to say. Reviewing it on holiday without internet access, I had no preliminary information, no hype, nothing. This probably turned out to be a good thing, because looking at the synth’s spec cold, you could be forgiven for muttering ‘nothing to see here’ and moving on; just another subtractive soft synth with a bunch of oscillators and relatively cool add-ons. Good job I didn’t judge it by its cover…

At Carbon Electra’s heart lie four sync-able oscillators with adjustable pulse widths, FM and selectable waveshapes. There’s a filter section with six filter types; a fairly simple effects section (that includes chorus, distortion, delay and EQ); and a flexible (if again quite simple) LFO section. Nothing to get too excited about so far, although I do already like the fact that it is simple, with everything within reach – all in front of you, no hidden menus, so it’s easy to get your head around.

I also like the sound of the step editor, which can be assigned to pitch, volume and cut-off. Then there’s the fact that the synth has a top range of current and not-so-current producers drafted in to bulk out its presets, so you have everyone from Carl Cox to Faze Action contributing sounds. 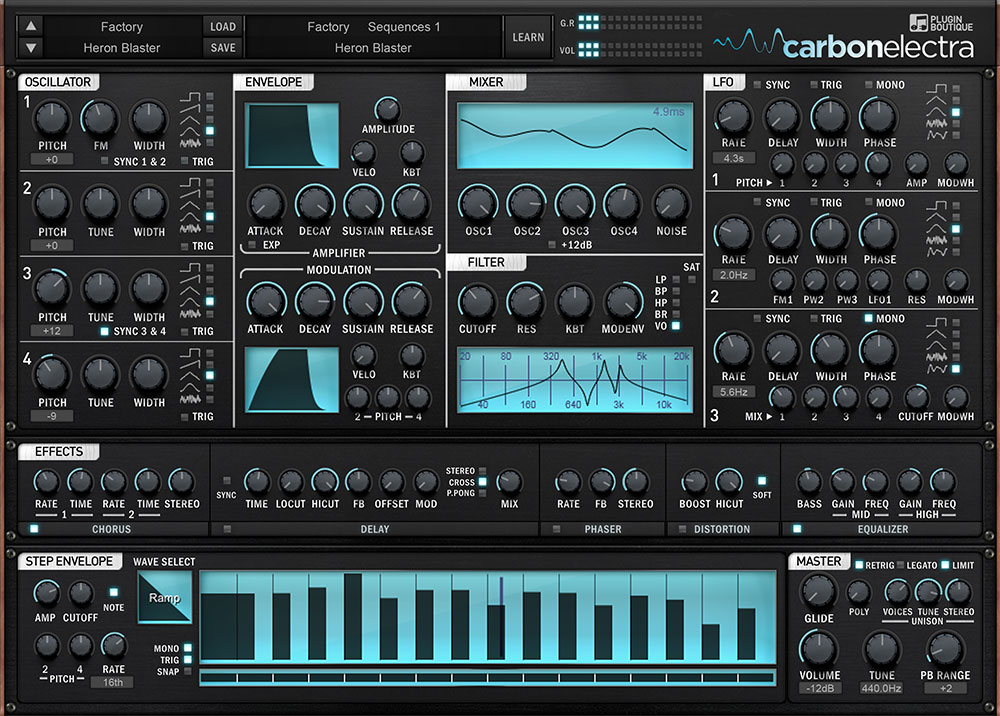 Show Off Your Studio entrants).

Carbon Footprint
If Carbon Electra has a market, it is clearly dance. One look down the list of producers and you’ll realise that, and – if not – Factory preset names that reference Prodigy (synth and band) and 90s jungle, plus a whole host of other genres, will certainly bring home the point.

But, actually, the remit is a lot wider – it’s a broader sweep of electronic music that this synth covers, so there are all sorts of arpeggiations, basses and leads across the factory presets that, yes, hark back and forth between dance old and new, but also straddle more traditional genres of electronic music – there’s plenty of ambient, soundscape, scoring and electronica in there, too.

But it was when I threw it at a bunch of old 8-bar loop ideas that I had the most fun. These snippets of songs have never gone beyond initial loops – bits and pieces I’ve had around for ages, many of which I never thought I’d rescue from my hard drive.

However, some of Electra’s sounds really did breathe new life into them – not necessarily the dance life that was perhaps intended, but energy nonetheless. There’s a great movement in many of them, and the sound quality shines through – perhaps down to what PB describe as the synth’s “ability to run the amp section ‘too hot’… creating a modern hyper-compressed sound.”

So Carbon Electra’s not ‘just’ dance; it has plenty of added bells and whistles. This is perhaps down mostly to the additional features I’ve touched upon.
They might not sound too dramatic, but they do broaden the synth’s sonic footprint. The Step Envelope section, for example, proves to be a lot more flexible in practice than its spec implies – as do the effects. Again, this is down very much to the fact that everything is displayed in front of you, so you are drawn in to edit and tweak – which the synth’s programmers and named producers have clearly been busy doing. 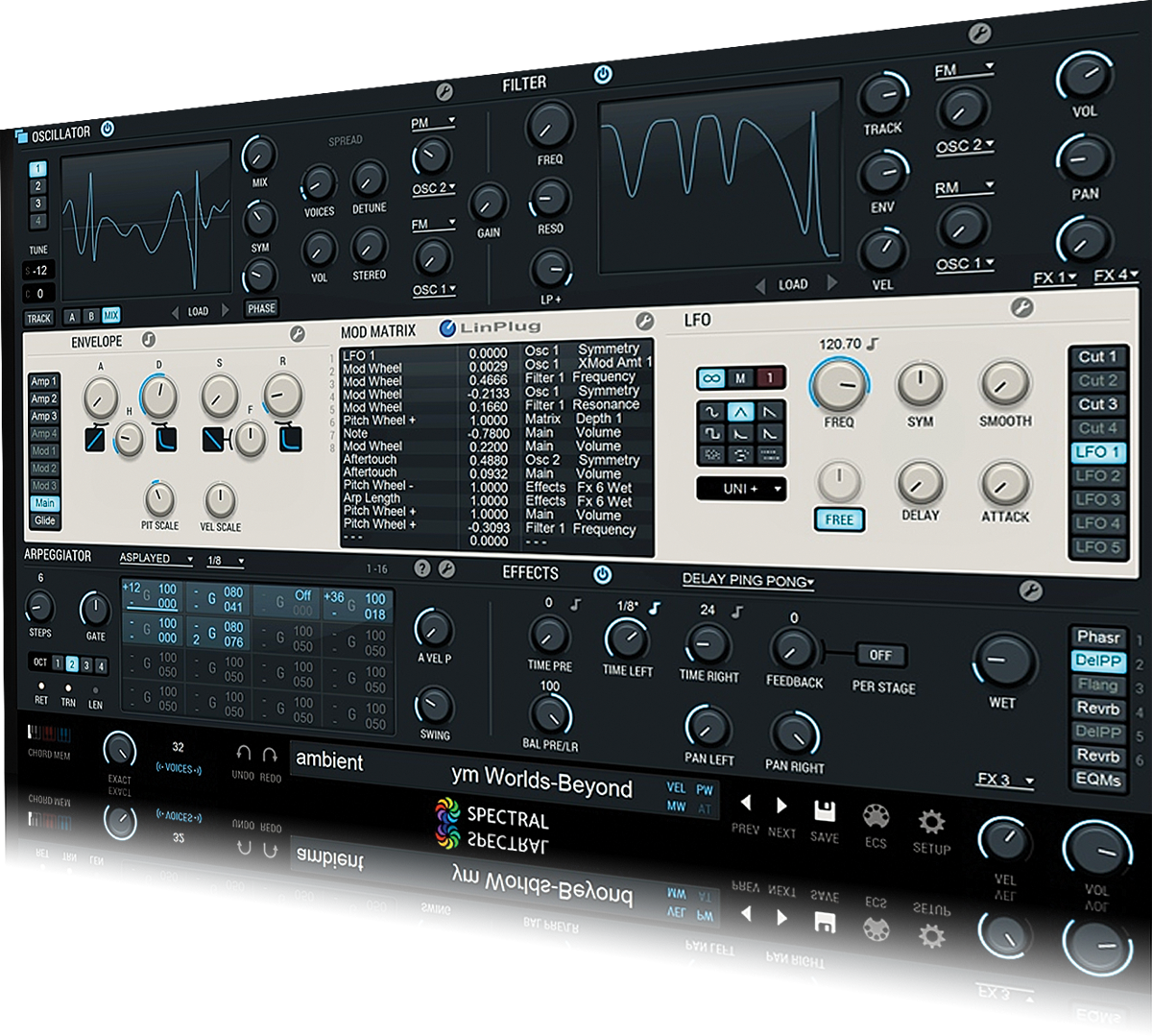 For some great dance sounds, I looked at LinPlug’s Spectral ($149) synth about a year ago. It’s a great synth and has four oscillators, in common with Electra, but does boast a lot more in terms of control and movement – and is pretty easy to use, too (although maybe not quite as easy as CE). Rob Papen’s Blue-II ($179) also springs to mind, not so much based on architecture but on some of the sounds you get – mind you, that synth does seem to cover everything, with an extraordinary number of onboard presets.

We’ve Run Out of Carbon Puns…
I won’t go through all of the whopping 600 factory and artist presets – you will find a good selection of bass, lead, pad, key, chord, arpeggiator and effect sounds across generations of dance music and genres. Instead, I’ll try to sum up what the extras bring – and there’s
a definite sense of movement.

Just play with the Step Envelope section for maximum impact with minimum fuss. It’s so easy to adjust the pitch, filter cutoff and volume of the notes played, and the rate at which they are played – all defined by 18 different waveshapes – and get something completely different but at the same time very usable, very quickly.

Going back to that boast about running the output amp too hot and, after my auditions, I’m starting to believe it – the synth’s sounds definitely cut through the mixes I tried it on, especially those old looping ideas. Basses really bring the bottom end of mixes to life, and some of the leads and incidental effects add angles to tracks

I can only dream of. In fact, I’m a little embarrassed at how good some of these happy accidental preset inclusions sound (I did program the original notes so they are all mine, OK?!).

Are Friends Electra? (Sorry)
So, it turns out that Carbon Electra is one synth that is not as easy to lazily pigeon-hole as I’d originally anticipated. Yes, it’s aimed at dance producers, but work (not too hard) with it and you’ll get a lot more out. It’s easy, fun and packed full of potential, and I’ll be resurrecting a few lost causes with it over the next few weeks. If we could have lightning flashes and luminous blue controls for v2, though, that would be the fluorescent icing on the cake… 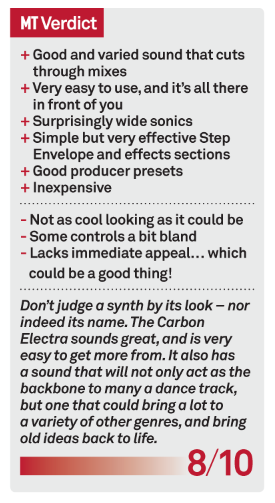