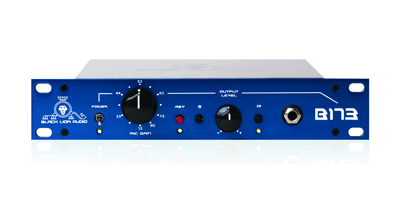 Black Lion Audio’s B173 is inspired by one of the best solid-state mic preamps ever made. John Pickford puts it to the test…

Hot on the heels of our review of Black Lion Audio’s B12 mic pre, based on the API 312 from the 1970s, comes this, the B173. No prizes for guessing that this is the Chicago-based company’s take on the Neve 1073, probably the most revered solid-state microphone preamp of all. We’ve tested several 1073-type preamps in recent times, including Neve’s own latest incarnation of its original design, the 1073 DPX.

This new, single-channel design appears as a 1U half-rack unit, delivering up to 80dB of mic gain. It’s not intended to be an exact clone of a 1073, so there’s no take on Neve’s novel Mic/Line gain-control configuration.

There would be no point, as this new unit does not have a line-level input. It does, however, feature a DI instrument input on the front panel. Other front-panel controls comprise a chunky 12-position rotary switch for input gain, a smaller rotary pot to adjust output level and push-button switches to engage phantom power, invert phase and select DI input. A power switch is sensibly located on the front panel and a distractingly bright blue LED illuminates to indicate that the unit is switched on; LEDs are also provided to show when phantom power is engaged or when the DI input is selected.

Like the B12, back-panel connectors are provided for XLR microphone input and a balanced TRS line output as well as an internal chassis ground terminal and a socket for the supplied wall-wart power supply. We made the point when reviewing the B12, but it’s worth repeating here: the absence of XLR output and provision of wall-wart power supply indicates that the designer has chosen to allocate his budget to quality components rather than pro-looking connectors. Those high-grade internal components include a CineMag input transformer and Edcor output transformer, with the discrete design operating in Class A mode.

In-Use Tip
The treble-heavy nature of the B173 makes it a good choice for adding some brightness to dull signals or recording instruments that often need some top-end boost.

Using our insensitive Coles 4038 ribbon mic above a 1960s Ludwig drum kit, we ramped up the input gain to near maximum and eased back on the output level to gently overload the transformers, creating a touch of musically pleasing saturation. The result was a full, rich and lively sound with plenty of transient snap and punch.

Warm Audio’s WA12 (£349) is based upon the API 312 amp, using custom-designed CineMag transformers to provide its own distinctive vintage flavour.

Sound is King
Black Lion Audio doesn’t go in for funky retro-chic, preferring to stand by its motto of ‘Sound is King’, with which we fully agree. It’s ironic, then, that the utilitarian black dials are reminiscent of those found on old Pultec equalisers that pre-date the 45-year-old Neve design by almost 20 years. These controls feel solid, as does the unit as a whole; build quality is excellent.

As with all of the microphone preamplifiers we test, a variety of distinctive microphones were used on familiar sources to assess the unit’s true character. And, like authentic 1073s and other vintage solid-state designs, the B173 certainly has bags of character; it’s not an ultra-clean, transparent design. For some engineers, particularly those who like to hear the individual character of their microphones, preamp character translates as unwanted colouration, and there can be no doubt that the B173 is an extremely colourful preamp.

Our first test involved using an AKG C414 on the studio’s Epiphone acoustic guitar. We recorded three passes, first using the B173, followed by our 1980s DDA console and then another Neve-inspired mic-pre (Golden Age Project PRE-73 Jr) also in for review.

It was immediately apparent that the B173 was brighter than the other two, producing a rather obvious, spot-lit treble response. Although the upper frequencies were prominent, the unit delivered a firm and robust bottom-end, with a nicely thick and warm low-mid response.

In this respect, the B173 showed its pro-audio credentials, with a full-bodied tone that evades the mean, flat and lifeless sound often produced by the cheap amplifiers found in budget mixers. The extreme upper frequencies were reasonably extended, although masked somewhat by the exaggerated response in the treble region below 10kHz. This gave the acoustic guitar an overly clangorous sound compared to the other preamps.

Upright piano, recorded with our valve Neumann U 67 fared better, the B173’s glaring top-end adding an edgy presence to the smooth and dark nature of the microphone. We did notice, however, that while we were able to add some air at 16kHz on our DDA channel, the B173 didn’t respond so well unless we also used some corrective EQ cut to tame the treble edge.

Things got much better when we turned our attention to drums. Using a pair of Coles 4038 ribbon mics set up in the classic Glyn Johns method, the brightness of the B173 brought out the snap and attack of the kit, especially when we dialled in plenty of gain and eased back on the output level to generate some gentle saturation. With this in mind, we later employed the B173 in conjunction with a Beyer M201 on a snare drum track when recording a multi-mic’d kit.

This combination worked wonderfully, sounding fat, punchy and crisp. We used the Beyer M201/B173 combination again to record an electric lead guitar overdub with similarly excellent results, reminding us that when the right tools for the job are used in the first place, very little tinkering is needed later on.

Finally, we tested the DI input by plugging in our vintage Vox Continental organ. Again, we were aware of a bright presentation not found when using our reference DI input on our valve-driven Rooster 2 mic-pre, although this was not unduly harsh or unpleasant.

As long as the B173 is used in situations where a boost in the upper frequencies is desirable, recording drums for instance, the unit will shine with its warm, full-bodied lower registers and ample treble energy. Engineers who want their microphone preamps to be clean, neutral and transparent should avoid this unit, while those who value a range of characterful equipment to provide a broad palette of tonal colour will welcome it into their arsenal.

Although the B173 is a characterful, vintage-style preamp, it doesn’t have an authentic Neve sound. The GAP PRE-73 Jr, with its Carnhill transformer, sounds much closer to a real 1073. In its favour, Black Lion Audio states that while it originally planned to produce a 1073 clone, it decided to “Pursue our own unique design that combined both vintage and modern characteristics”.

To that end, it has succeeded. The B173 offers vintage solid-state sound in a modern, compact package. 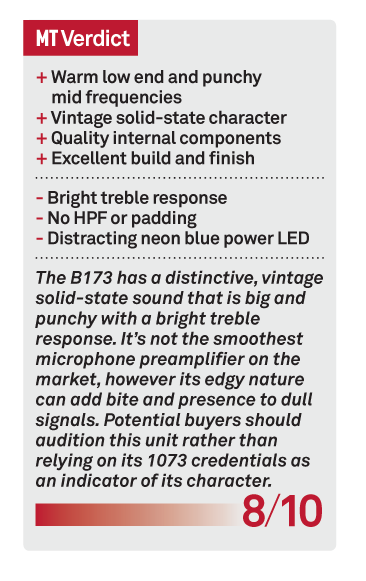