As the title infers, Forest Kingdom is the sequel to the original Forest Kingdom reviewed by us a couple of years ago. Like its predecessor it also draws on the natural sounds of ancient forests and jungles for inspiration. Indeed, the complete Forest Kingdom (1) has been updated and included in version 2 along with […] 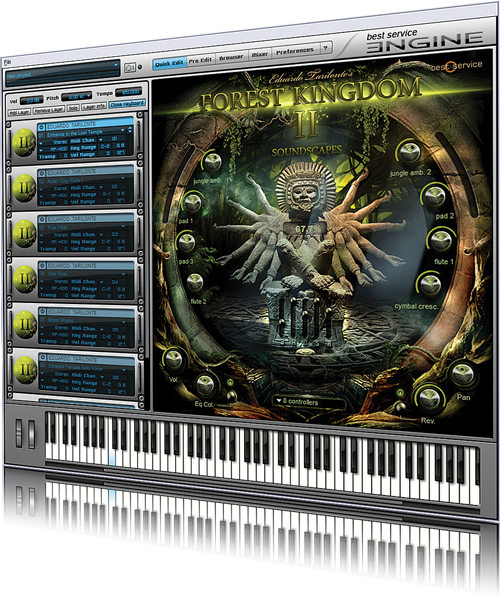 As the title infers, Forest Kingdom is the sequel to the original Forest Kingdom reviewed by us a couple of years ago. Like its predecessor it also draws on the natural sounds of ancient forests and jungles for inspiration. Indeed, the complete Forest Kingdom (1) has been updated and included in version 2 along with new instruments, MIDI grooves and soundscapes. The free Best Service ENGINE 2 sample player is included with the product.

Few instruments are better at conjuring up the steamy atmosphere of the tropical rain forest than an ethnic flute. As well as the exotic-sounding instruments from the original version, several new flutes have been added — two clay Aztec instruments (ocarinas), a bass flute from Bolivia (Moseno), a Raj Nplaim flute made from reeds, and a wooden overtone flute designed to play in the upper harmonics, well above the usual practical range. Flutes aside, there’s also a splendid didgeridoo and a blown Mayan seashell horn. A kalimba, presumably African, and a music box have been added to the plucked instrument category, which already contains a couple of Celtic harps.

The already extensive percussion section has been expanded further with many new deeply sampled instruments, most having up to 14 velocity levels and four round-robins each. MIDI files are included and where there is more than one drum to a set, each drum can be individually panned. The new Bata Drums, for example, contains three drums, which are panned by default as small, medium and large with settings of left, centre and right respectively.

The addition of MIDI files to the percussion instruments collection is a good idea because even if they are not used in a composition they provide a clear idea of how they should be played. Without pictures of the many lesser-known instruments in the manual, choosing suitable sounds to use can be very time-consuming.

The pads, of which there are many, are now called Soundscapes and each one has from one to eight different layers. These can be selected and edited and each one comes automated by default to a CC number. These, too, can be tweaked to suit. The previous collection of pads was huge and with a large selection of exotic new material this section is now bulging at the seams with soundscapes ranging from otherworld dreaminess to menacing jungle undertones. However, with so many soundscapes to choose from, many of them with similar textures and titles, a degree of sameness soon starts to creep in.

The remaining categories have changed little except for the odd new sample here and there. However, there are 300 multitrack MIDI files for compositional inspiration. This amounts to more than three hours of musical performance. They come with a rendered audio file, too. As tempted as some will be by these ready-made backgrounds you cannot, of course, use them without first altering the MIDI files before incorporating them into your own compositions. A tutorial on how to use them is provided.

If you bought the original Forest Kingdom you might hesitate before buying what is essentially an upgrade. While there are 70 new soundscapes some of them are very similar-sounding and if you feel creative you can, of course, make your own from the existing original material. The new instruments, though, are a different matter and depending on your needs, they may tempt you to upgrade. The new version is nicer to look at, too, with a new Quick Edit view. It remains rather dark but the graphics and controls are much improved. Also, the old patches have been revised and updated.

If you haven’t yet investigated Forest Kingdom and you’re into new age music, documentary soundtracks or any style of music requiring an exotic jungle ambience we urge you to do so.

The entire original Forest Kingdom is included here so it remains a highly recommended product with some outstanding new ethnic winds and percussion. We’re not so sure about having so many new soundscapes, which tend to pall after a while.