With analogue hardware continuing to make a comeback, it was only a matter of time before we saw more old-school mixers appearing on the horizon. But they’re coming with plenty of new-school functionality, as Andy Jones discovers… Details Price £620 Contact via website Web – www.behringer.com Now this is getting crazy – I’m sitting here with an analogue mixer […] 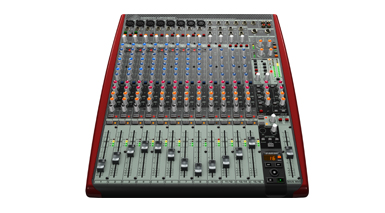 With analogue hardware continuing to make a comeback, it was only a matter of time before we saw more old-school mixers appearing on the horizon. But they’re coming with plenty of new-school functionality, as Andy Jones discovers… 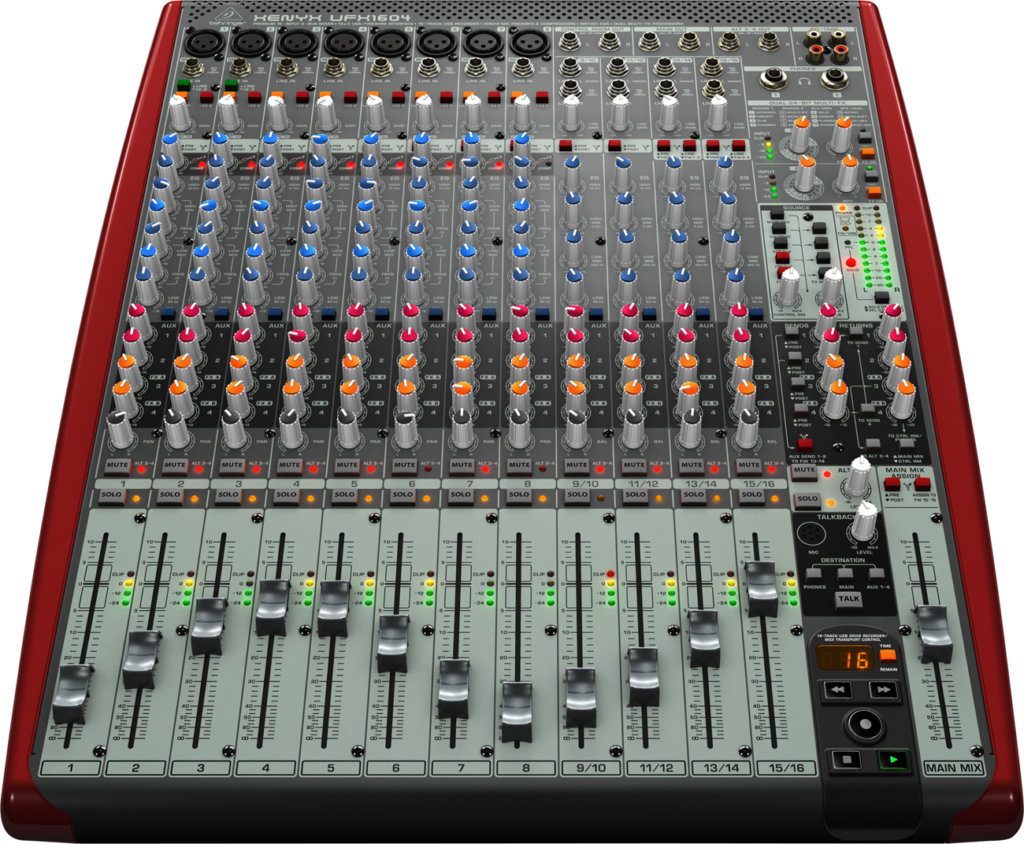 Now this is getting crazy – I’m sitting here with an analogue mixer in front of me to review. Is it 20 years ago all over again? Well, with so much analogue gear coming out, it was only a matter of time – and in my case it’s the perfect time. With three hardware synths in my studio and Logic Pro X sitting in the centre, I need some way of getting their sounds into my laptop with the minimum of fuss – and now I’ve looked into it, this Behringer desk could be just what I need.

Firstly, the Xenyx UFX1604 might well be analogue, but contrary to my initial thoughts it’s not something I’d have used 20 years ago as it’s stuffed to the rafters with added extras, including a USB and FireWire interface, a 16-track recorder, eight mic preamps and compressors, plus ‘British’ EQs. That’s quite a feature list, and, of course, because it’s got the Behringer name on it you’re going to pay a lot less than you might think, in this case, typically just £620.

First Things First
Hooking up the mixer to my Mac via FireWire filled me with some dread, I don’t mind admitting. I’ve had no end of ‘fun’ with various interfaces and Logic over the last few months where you end up having to shut down and restart in order for one to recognise the other – ruining those moments of instant inspiration and surely not what computer music-making is about.

So I was nervous that I’d need to install software between Logic and the mixer – or at least drivers of some kind – and then mess around booting up one before the other and making sure that I stick to that order, but one ‘initiation of Core Audio’ within Logic and we were up and running. I even tried (deliberately) disconnecting one from the other in various orders to see if I could upset the apple cart and it’s only fallen over once. Day to day, the only thing you might need to do is switch the desk on and off once a session for it to be recognized.

Interface Time
With Logic’s audio now routed to my speakers via the mixer, it was time to hook up the synths to see whether routing audio from the outside back into Logic is as easy – and yes, it is. Plug in the synths conventionally and you can treat the analogue signals as you would on standard analogue mixers, adjusting the fades for levels. But the signals are also routed back into Logic via FireWire and all you have to do is select from the 16 available input channels the Xenyx offers (now in audio interface mode) on each audio track to hear it. Within minutes I’d added a great analogue Moog Sub Phatty bass to an ‘in-the-box’ track I’m working on in Logic and everything was going swimmingly.

It’s also fair to say that there was not a lot of noise coming through the mixer. I’d expect some as I’m using analogue sources, but only when I pushed all levels to maximum, including the input gains on the Xenyx (which you wouldn’t do as the signal is already distorting in Logic at around 70%), did I detect some noise – quite nice to hear after all these years! But, like I say, you wouldn’t use the mixer/interface like that, and in a normal session it was fine.

More Main Features
So that’s the interface bit. Now, running down each channel strip as if you were using it as a conventional mixer, you get XLR mic and line inputs, Hi Z modes on channels 1 and 2 (these are for your guitars or bass), low-cut (filtering under 80Hz), +48V phantom power (for condenser mics that need it), plus a line-level input-gain rotary.

The send button lets you choose whether to send the signal into your DAW at this point or via the EQ section that comes next, so you can make use of the Xenyx’s EQ section prior to your signal going digital. Before we get to the EQ, channels 1–8 each has a one-knob compressor. I found a post in a Gearslutz forum from Behringer’s John DiNicola, who explains: “As you turn the knob clockwise, the compression threshold is brought down and appropriate make-up gain is applied. This essentially allows you to adjust threshold and gain with a single knob, keeping volume consistent as more compression is applied.” While subtle, it did add some punch and buzz to basses along with a bit of kick.

EQ and Effects
I’m not sure of Behringer’s claims about ‘British EQ’ as I think the company might have fallen into the same trap as the rest of us and that the very term is a marketing ploy – see the box for more on that. But the EQ here is very flexible and you really can shape your input signal however you want.

There are four aux sends for routing your inputs to external effects boxes, and the last two double at sending it to two onboard effects sections. You don’t get the chance to add these effects to signals coming in, by the way, which would have added a bit of fun to proceedings. You can, however, route the signal from within your DAW to channels 13, 14, 15 and 16, so with a bit of clever soloing you could use the Xenyx’s onboard effects for anything. But would you want to? Let’s find out…

Two sets of 16 different effects to send to sounds pretty good. You get reverbs, delays and some modulation effects plus multi-effects. You select each of the 16 using a single rotary and as this is a desktop mixer it’s quite difficult to see where you are. Indeed, it’s a shame that this mixer doesn’t come with a rackmount kit as control like this would be much easier to manage when looking from above.

The effects themselves are dramatic if nothing else. The first, a cathedral reverb, is big and easy to push to being too big. All of the reverbs have that platey kind of drama, the best being one called Gold Plate. The Reverse one, too, is very nice (a bit more subtle), although the Ambience one didn’t get my juices going. The second rotary here allows you to edit a parameter (the fade time in the case of the reverbs). The delay is simple but effective – just make sure that the second rotary is not set to max or you’ll have delays everywhere. That does work with the mod effects, though; having the second rotary set high really does yield interesting results.

Finally, there’s a tap button that allows you set a tempo for the delay effects to adhere to, and it also doubles as a toggle button to allow you access to other parameters for certain effects.

Conclusions
I’ve reviewed the UFX1604 perhaps rather selfishly, because what I am doing at the moment is creating a studio that attempts to marry the best in hardware with the best in software, so I’ve concentrated on its ability to do that – and I think it does it rather well all things considered. However, you could just as easily use it in a live environment as well as many other typical studio situations. In these scenarios, the onboard recorder, which I didn’t touch upon, could be something of a godsend, especially if you regularly record gigs.

Sure, there is the odd shortcoming. Ideally I’d have liked to be able to rack it (although it does look rather splendid residing on my desk at the moment – those curvy red wings match the Nord Lead). The faders have a little inconsistency in terms of torque, as do one or two of the rotaries. But for what I wanted it for and for the speed at which I got it up and running, the Xenyx UFX1604 does a great job. And, as always, the ratio of features to cost with Behringer products is a great one, and the three-year warranty should put people’s minds at ease too. 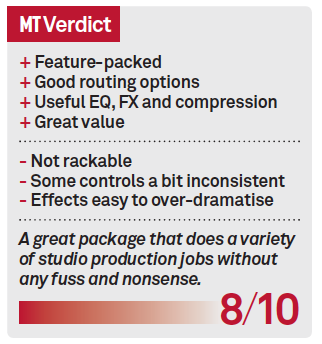 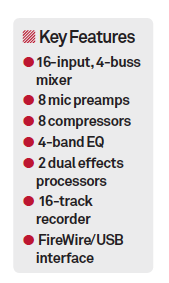