The ADA8000 has served Behringer well over the last decade, but having acquired mixer manufacturer MIDAS, its new ADA8200 sees some changes. Huw Price checks it out. Details Price £262 Contact via website Web www.behringer.com Besides the new Focusrite-alike colour and some new non–indented control knobs, there is nothing here to vex ADA8000 users. The design and […] 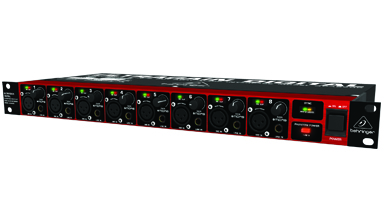 The ADA8000 has served Behringer well over the last decade, but having acquired mixer manufacturer MIDAS, its new ADA8200 sees some changes. Huw Price checks it out.

Besides the new Focusrite-alike colour and some new non–indented control knobs, there is nothing here to vex ADA8000 users. The design and layout are the same, so all the upgrades are hidden inside. The new power supply promises to fix known overheating problems, Cirrus AD/DA 24-bit converters are now standard, and the TL072 op-amps have been upgraded to NJM4580 chips.

For those unfamiliar with Behringer’s previous model, the ADA8200 is a digital interface with eight microphone preamps and individual analogue outputs for each channel. Each channel also accepts line-level signals via a TRS jack socket. All input connections are made on the front panel, with output XLRs located around the back. Global phantom power switching is provided, along with indicator lights for signal, overload and sync status.

On the Clock
A BNC connector handles Word Clock input and TOSLink cables handle eight channels of ADAT I/O. Also on the rear panel is a Sync switch that designates internal or external Word Clock source – either Word Clock or ADAT in. When the ADA8200 is the Word Clock source for external ADAT devices, the switch sets the sample rate – 44.1 or 48kHz.

We are big believers in A/B testing so we decided to make some simultaneous recordings, and this provided some insights into synchronising the two devices. Instructions in the manual are cursory at best, especially if you are a beginner, but things went smoothly for us.

Sounding Off
Getting back to the sound tests, there were two broad areas of interest: the sonic quality of the onboard preamps and the digital converters. To test the preamps, the signal from a fairly high-end valve microphone was spilt using a very high-quality Sowter transformer and connected to the microphone input of the MOTU 828MkII and channel 1 of the ADA8200.

Testing in this way enabled us to eliminate any variables in performance or microphone placement, so the only variables were the preamps and the analogue-to-digital converters. The ADA8200 was perhaps slightly smoother than the MOTU and there was a hint of extra air in the treble, but there was little to choose between the units.

To test the digital-to-analogue conversion we connected output channels 1/2 from the ADA8200 to the second two-track input of our desktop controller. After equalising the signal levels (the ADA8200 has higher output than the MOTU) we were able to switch instantaneously from the MOTU’s output to the ADA8200’s in Logic.

The ADA8200 produced a slightly wider stereo image, but the MOTU sounded more solid and focused in the bass. So the difference between the units was hardly night and day; in fact, it was barely discernible.

Happy Convert?
The ADA8200 has respectable rather than outstanding sonic qualities. On the positive side, the noise floor presented no problems and the mic pres provide ample gain and headroom. Compared to some multi-channel interfaces, the front-panel location of the inputs makes a lot of sense. However, it also means that there’s no space for attenuation, phase or HPF switching. Combination XLR/jack output sockets would have made it easier to integrate the ADA8200 into our system, but XLRs are obviously a pro choice.

The thing that really impressed us was the ease of syncing the ADA8200 with our interface. It worked first time and continued working throughout testing. It’s a basic but well-made interface that’s low on features and sample rates, but high on practicality. 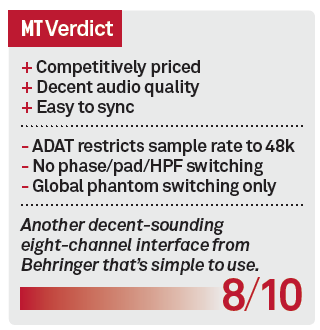