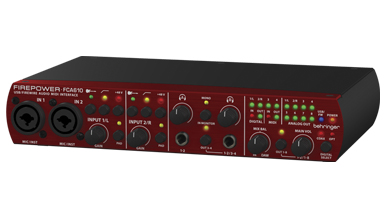 So far the Firepower series is comprised of two units: the FCA610, and the FCA1616. Both interfaces support Windows XP/Vista/7 plus Mac OS X. They’re compatible with popular recording software including Pro Tools, Ableton Live, Cubase, Logic Pro and more. Behringer also provides free audio recording, editing and podcasting software along with 150 instrument/effect plug-ins – all of which are downloadable direct from the company website.

The rear panel of the Behringer FCA610 features a comprehensive selection of inputs and outputs, and so can be easily integrated into most types of setup.

First up is this grab-and-go unit. It measures 24x16x4.5cm, so it’s very portable and you could easily pop it into your computer bag along with a laptop. The 610 can draw power from the computer via USB and FireWire or via the 12v wall wart that’s provided.
Since it’s both small and fully featured, the controls and connections are all tightly packed.

The two microphone/line inputs are XLR/TRS jack combination sockets located on the front panel. Each channel has a gain control plus switches for bass roll-off, phantom power, attenuation pad and high-impedance sources such as electric guitar and bass.

Also on the front panel are two headphone outputs with individual controls. Both can be switched to mono, and Headphone B can be fed from Outputs 1+2 or 3+4. The main volume control that feeds the monitor speakers can be assigned to Outputs 1+2 or Outputs 1-8. The latter is selected when the 610 is used with a 7.1 surround system.

For low-latency monitoring, the Mix Bal control alters the balance between the input signals from microphones/instruments and the playback from your DAW. LED indicators are provided for digital signal and MIDI in and out. Further LEDs indicate the presence of audio signals for all four inputs and eight outputs, A switch selects coaxial or optical digital connections and balanced jack connections are provided for Inputs 3+4 plus all eight outputs. The MIDI in/out connections are also on the rear panel next to the FireWire and USB sockets. 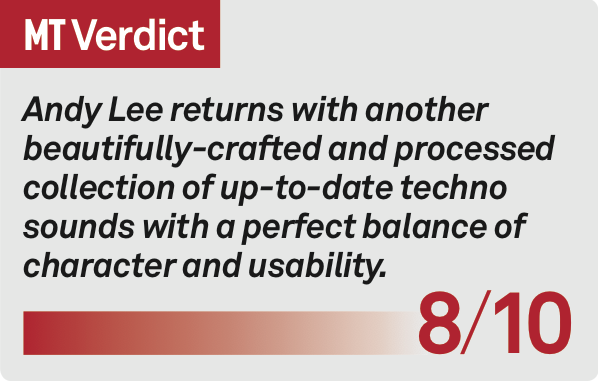 The 1616 is more or less identical to the 610 but the number of inputs is doubled to eight, with four mic amps on the front panel. Each input channel also has unbalanced inserts, so you can patch in compressors, equalizers, etc, to process the signals before they’re digitally converted and sent to the DAW.

This time the digital formats include S/PDIF (coaxial and optical), ADAT and S/MUX. It’s almost twice the width but you have the option of choosing to use it as a portable device or attaching the rackmount brackets for permanent installation.
The 1616 streams a pretty impressive 16 inputs and outputs, and a further eight microphone inputs and eight outputs can be added by linking a Behringer ADA8000 via ADAT. Both the 610 and the 1616 have Kensington security lock ports.

Since the mic preamps and converters are identical, there is nothing to choose between the 610 and the 1616 in the sonic stakes. The mic preamps have solid-sounding, low-noise circuitry with ample gain for most applications. They are certainly impressive at this price point. Both these units have switchable bass roll-off but we’re a little disappointed that there’s still no phase switching.

The digital converters were certainly on a par with the converters in the MOTU 828mkII we used for comparison and we experienced no issues getting these units running with Logic Pro on a Mac Book Pro. The crucial difference between the Firepower units and Behringer’s ADA8200 is that they can interface directly with a computer whereas the ADA8200 must be routed through another unit that boasts USB/FireWire connectivity.

The FCA1616 is bigger in size but you still have the
option of slotting it into a rack or using it as a portable device should you require more inputs for live use. 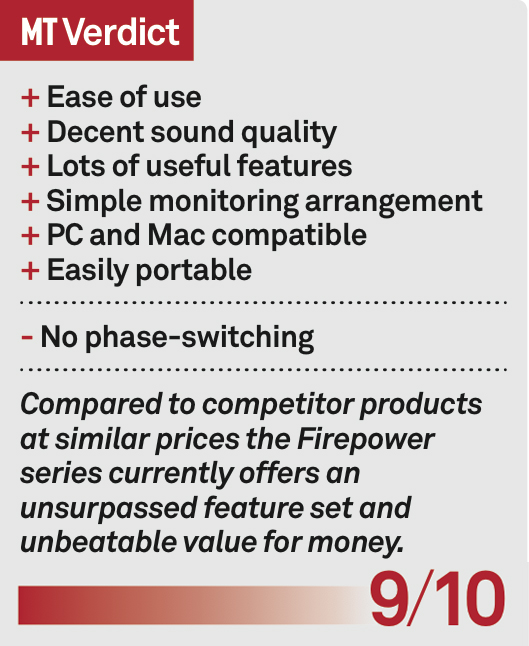 Behringer may not be the sexiest of brands but these Firepower units deserve consideration because they are fully featured, sound very decent, and do the job required in a no-fuss and problem-free manner. The only things to choose between them are the price and the number of simultaneous in/out channels you require.