All is not what it seems with the AT5045. It may look like a pencil microphone, but it’s actually a side fire condenser with a large rectangular capsule. Huw Price reviews… Details Price £1,299 (£2,399 pair) Contact 0113 277 1441 Web www.audio-technica.com The AT5045’s electret capsule is similar to the rectangular capsule used (as an array […] 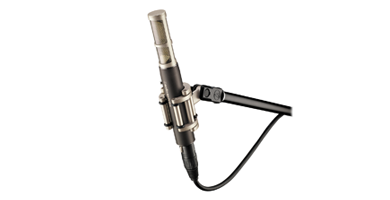 All is not what it seems with the AT5045. It may look like a pencil microphone, but it’s actually a side fire condenser with a large rectangular capsule. Huw Price reviews… 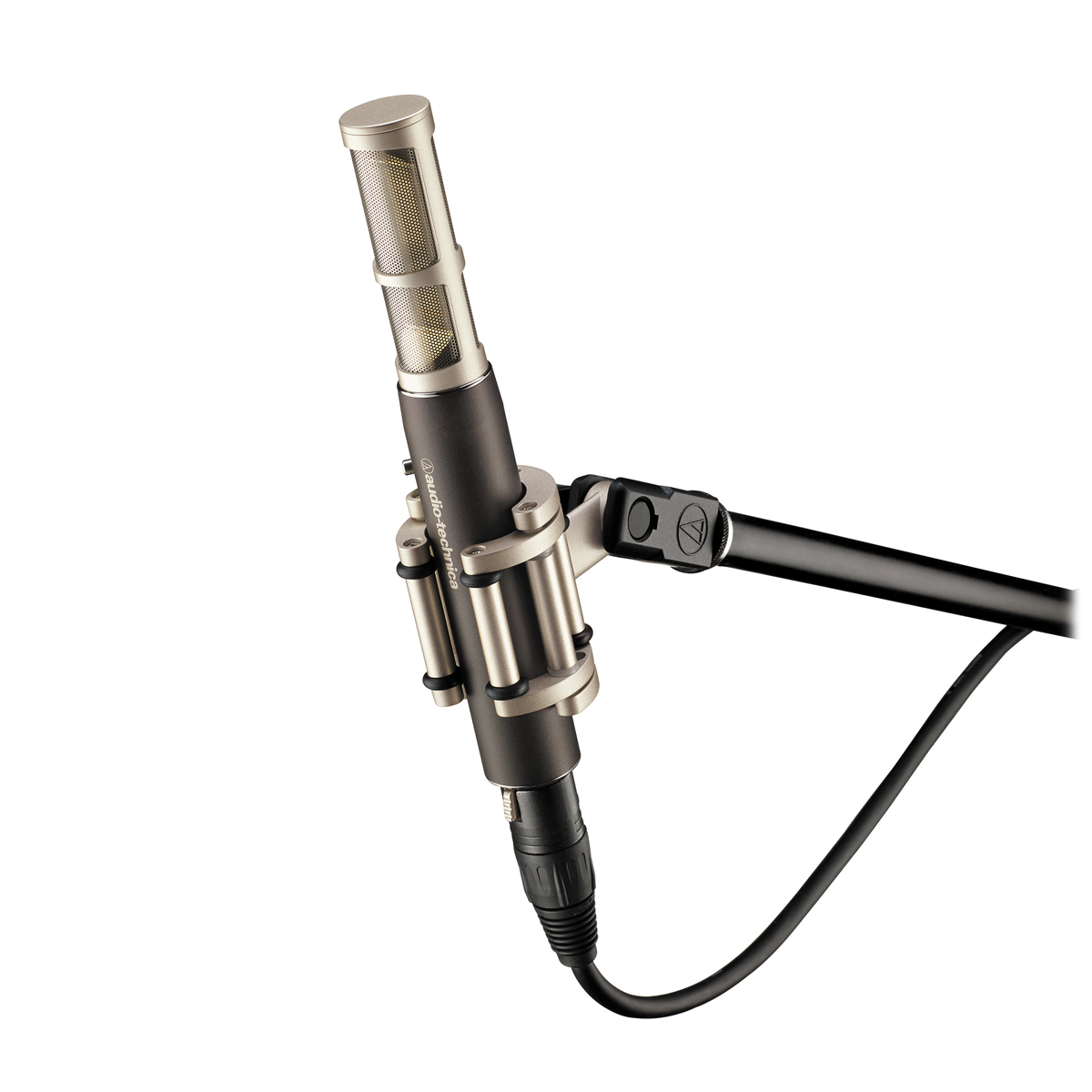 The AT5045’s electret capsule is similar to the rectangular capsule used (as an array of four) in Audio Technica’s flagship AT5040. Measuring approximately 32mm by 14mm, the surface area works out around 450mm². This compares with 490mm² for a circular capsule with a 25mm diameter – at best.

The narrow dimensions allow the capsule and onboard discrete electronics to be squeezed into the 25mm diameter body, along with an output transformer. The internals are mounted on a board that is suspended within the body. This internal shock mounting decouples the capsule from the microphone body to minimise transferred noise.

In Suspense
The kit includes an AT8481 isolation clamp, an AT8165 windscreen and a protective carrying case. The shockmount is an engineering triumph. It clicks open to receive the mic, then clicks shut to hold it. A small lever on the top locks the mechanism to prevent it opening by accident, and isolation is provided by eight rubber grommets that grip the body and presumably dampen resonances. They also spin, making it easy to twist the AT5045 in its mount for precise alignment.

Since this kit was supplied as a matched pair, we aligned the capsules side by side and made a simultaneous recording on identical mic preamps. On playback, we flipped the polarity of one channel, levelled the volumes and were able to achieve almost total silence. So when Audio Technica says ‘matched pair’ it really means it. 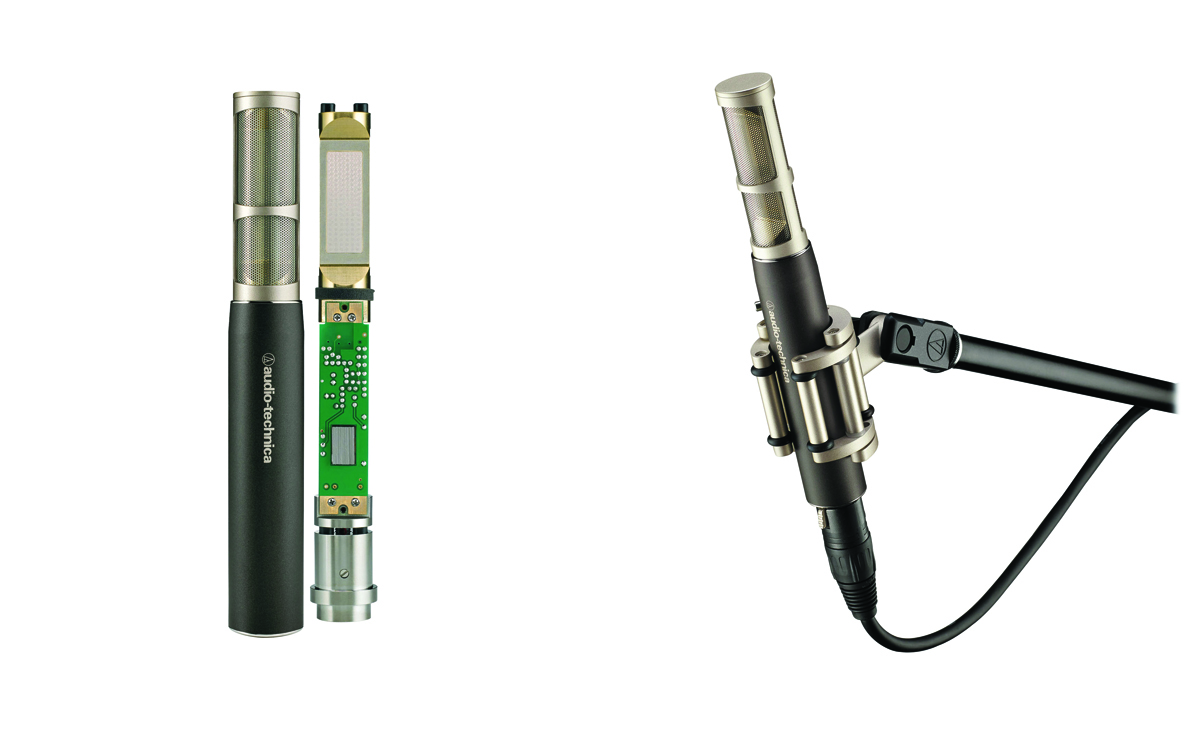 On acoustic instruments, the AT5045 impresses immediately with its wide-open and natural sound. Transients are captured with speed and accuracy to create a highly detailed rendering of the instrument, aided – perhaps – by a wide and fairly gentle presence lift. The midrange sounds commendably clean and uncoloured and, overall, we would describe the AT5045’s tone as essentially neutral, but with slightly enhanced brightness.

Match Making
Next, we arranged our two AT5045s as a coincident pair and were pretty blown away by the results. On acoustic guitar, the presence lift is judged to perfection. It’s exactly the amount many of us would routinely add to this particular instrument, for solo performance as well as cutting through mixes. The test recordings had a stunning sense of realism and the imaging was rock-solid.

Any concerns the upper mids might become too strident up-close were quickly dispelled, along with those we may have had about the absence of a bass roll-off switch. The tone certainly thickens up, and the low mids fill out, but it’s far removed from the kind of proximity effect you might associate with typical large-bodied condensers.

This does mean that the AT5045 won’t fatten up thin-sounding vocalists with beefed-up mids, and the warming influence of harmonic distortion. Off-axis response remains consistent with the on-axis sound, however the rear pickup encroaches quite high into the frequency range, so it’s only truly cardioid in the upper-mids and treble.

Alternatives
As you might expect, rectangular microphone capsules are quite rare. Besides Audio Technica, the only other companies that specialise in this type of capsule are Pearl and Milab. The Pearl ELM-C (£1,164) has a fixed cardioid pattern and FET electronics.

Go Anywhere
The AT5045 is one of those forgiving microphones that almost does the job for you. It’s relatively unfussy about placement, and has the ability to make things sound even nicer than they really are. It excels on acoustic instruments and vocals, combining the detail and realism you might associate with the best small capsule condensers with the larger-than-life presence of a large capsule condenser.

The small body also allows the AT5045 to get into places where there’s no space for a large capsule model. We could certainly envisage using this on snare drums, given the impressively high SPL handling. At the other extreme, the sensitivity is relatively high and the noise floor is so low that recording quiet acoustic sources would also be feasible. The AT5045 is not exactly cheap, but if we had a pair they would undoubtedly be amongst a handful of our go-to microphones. 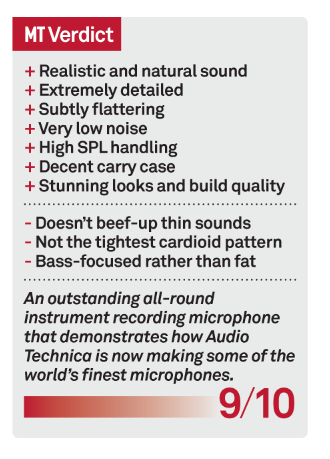