The Arturia iMini for iPad has just been released, and here’s our review and, we daresay, the first review to appear anywhere… Manufacturer: Arturia Price: £6.65 Available at: iTunes Store  Amazon.co.uk Widgets The iPad, as you can see in issue 121 of Music Tech , looks like it’s taking over the music production world. Music […] 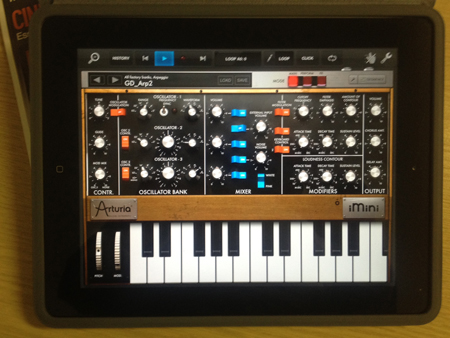 The Arturia iMini for iPad has just been released, and here’s our review and, we daresay, the first review to appear anywhere… 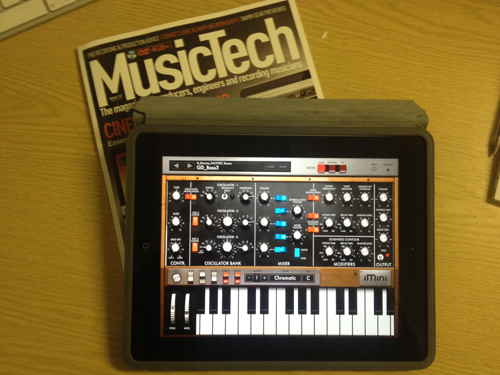 The iPad, as you can see in issue 121 of Music Tech , looks like it’s taking over the music production world. Music equipment shows like NAMM and Frankfurt resemble Apple stores as music hardware and software manufacturers, desperate for income in an industry that is not getting much income from actual music any more, leap on to any bandwagon going. And the iPad is one hell of a rockin’ and rollin’ bandwagon, and there’s plenty of room on board for everyone it seems…

Already this month we’ve seen – and reviewed – Traktor for iPad and now we’ve got an app based on a classic bit of software based on a classic bit of hardware. Arturia’s iMini (£6.99/$9.99/€8.99) is a recreation of the classic MiniMoog synth, or at least a recreation of Arturia’s software version of it. The app recreates the three oscillators, mixer, noise generator, filter and envelopes of the original but, this being software, there are additional effects, performance tools and a poly switch to increase polyphony.

Arturia say that “it uses the same technology that drives all the Arturia software products to achieve realistic sound,” and a running through the 500+ presets on it you’d be hard pressed to argue with them. Purists would argue that it will never empty your guts like the original hardware and others would argue that some Arturia presets are a little too clean and, well, perfect. But as a recreation of the software it’s right up there and to hear such classic sounds coming from your iPad is an almost unnerving experience so good as many of them are.

And just playing the thing is pretty much where you’ll be for the first few hours of use. The keyboard is obviously not full sized but big enough for me to get my fingers moving around the notes. (Hitting an icon near the iMini logo lets you adjust the key size and also allows you to scroll up and down the keyboard). You can step through the presets with left or right arrows or choose by category (starting with one of the programmers – a certain G Downes and K Schulze included) and then filtering down by sound and preset.

If you’re lucky enough to have tried an original MiniMoog you’ll have a clue what to expect. And if you own Arturia’s original software you’ll know exactly what to expect. There’s nothing ‘out there’ – it’s ‘analogue’ all the way. Basses are deep, leads will cut through your mixes and arpeggiations will produce instant 1970s classics with one note. It’s very electronic, the true sound of a synth from that era – no wonder Depeche Mode, Kraftwerk, Keith Emerson, Rick Wakeman and Jean Michel Jarre are mentioned on Arturia’s website. This produces the sounds that made their careers, and it does it very well.

Performance mode gives you a couple of X-Y pads that allow you to morph between assignable parameters and it’s here you can produce instant arpeggiated albums by the aforementioned artists. The FX section adds another update over the original with chorus and delay easily brought to the party and very welcome guests they are too, adding character and bounce where needed but not taking over the proceedings. Another big addition is, of course, Poly mode. The actual amount of polyphony this adds is unclear and, while playing, not as important as you might think. It’s pretty much limited by your finger size and you won’t be hitting big chords here if you have fingers as big as mine. 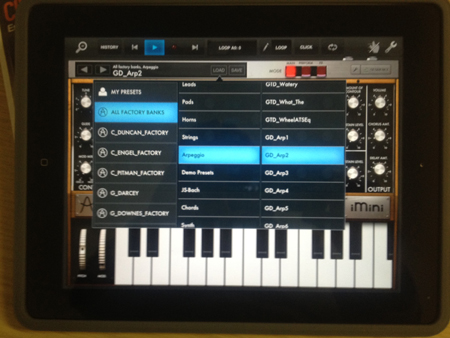 iMini is TableTop™ ready which means it will easily sit in the free TableTop app. This brings it much more to the fore in terms of what you can do with it. TableTop comes with other synths and beats so you can instantly hear how it inter-reacts with other instruments and you can program your own looped sections and string these patterns together to produce songs. The whole loop-based thing may not be to everyone’s tastes and I was rather hoping for an extended sequencer environment in which to play and record the synth but actually, once you get your head around TableTop, it’s very intuitive. In the set-up shown there are a couple of drum machines and a Glitchboard effects block which you don’t own (and will cost you £2.99 or £2.49 to buy) plumbed into a mixer which is where your iMini and the RS3 synth are also fed. Obviously TableTop is geared towards selling other apps but the demo patterns reveal the power of the set up and you can easily plug in to and control different channels; create, duplicate and delete patterns; and overall just start creating bigger pieces of, admittedly very electronic, but very good sounding music.

iMini’s other big features are listed below this review and include CoreMIDI for external control and audio export via TableTop. The latter is a big win although Audiobus support is not catered for (something Arturia are looking at for future updates). You can export your tune three ways: direct to your Soundcloud account, render it to WAV (whereby it goes into iTunes file sharing section) or, very neatly, direct into another app. Got Cubasis? Fire it straight over.

First impressions of iMini are that it sounds superb, is very easy to use and there’s enough in the way of iOS control to make it supremely playable and tweakable – just how you’d expect a synth to be controlled on an iPad. Performing is a joy and those export options allow you to take compositions and place them pretty anywhere you want. And as usual with iPad apps, the price is almost scarily low for what you get… 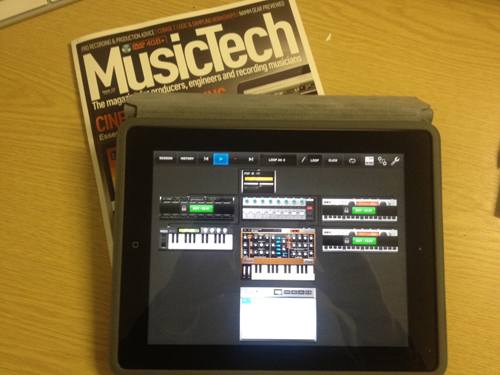 + It’s not a Minimoog, but it is the an Arturia Minimoog

+ A joy to play and perform with

Brilliant recreation of a classic recreation of a brilliant synth. Expect to see some very cool hep young cats playing one on whatever passes for Top Of The Pops these days very soon… 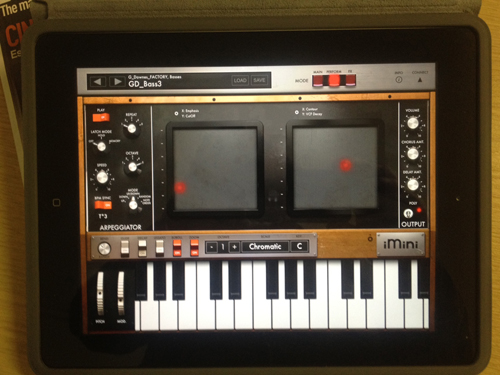 Main features (from the Arturia site)

This allows you to control iMini from your computer via wifi, via any of the 3rd party CoreMIDI interfaces, or directly using the camera connection kit and a keyboard that is compliant with the iPAD. We also support the WIST sync function that allows you to sync the arpeggiator and delay to others using iPhones or iPAD apps that support WIST.

Export to Sound Cloud from TableTop

One you have your song produced in Tabletop, you can then export the song as a .wav file for use in other DAWS. You can also choose to use the Soundcloud seeder and upload your finished production to your Soundcloud account. One other option is to use AudioCopy to then use the sound files within other iPAD applications that support AudioCopy

Owners of both the iMini and Mini V software apps can transfer sounds from one platform to the other via iTunes.

Render to .wav file (via Tabletop)

‘Audiocopy’ to paste your audio into another iPAD application. (via Tabletop)

iMini requires at least an iPAD 2 and OS 6.0 or later.