Andy Jones continues his massive review of the Korg ARP Odyssey… Again this is the new Odyssey, albeit the ‘MkII’ version. Look at the previous page’s image and you’ll see this is identical bar the colours. Like the ‘MkI’ this is a limited edition… So you get it So you understand that this is the […] 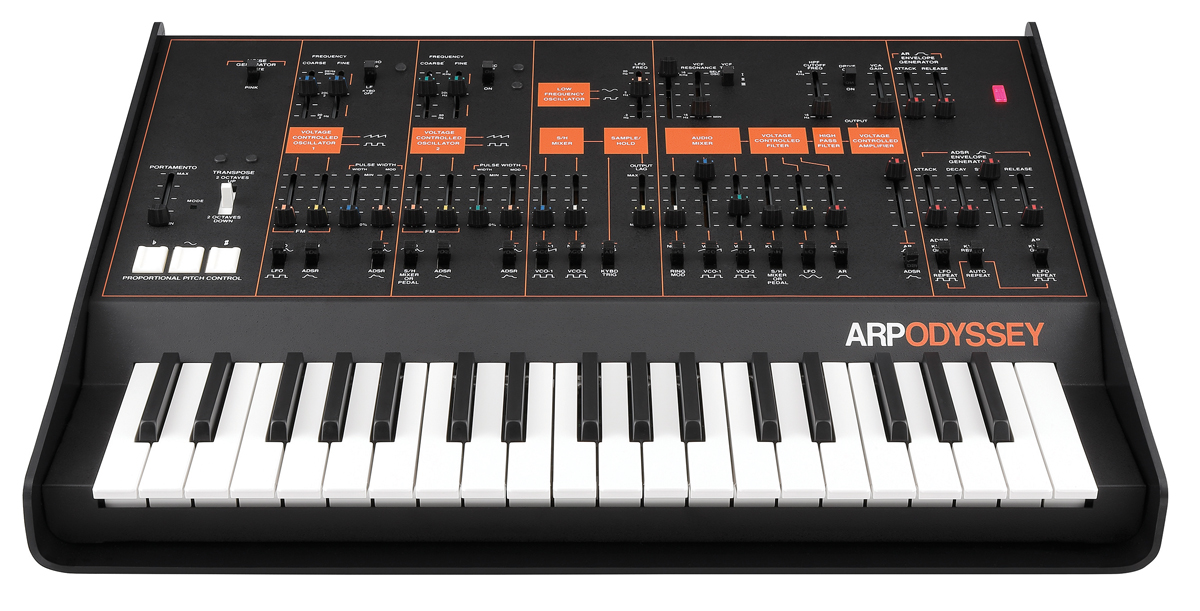 Again this is the new Odyssey, albeit the ‘MkII’ version. Look at the previous page’s image and you’ll see this is identical bar the colours. Like the ‘MkI’ this is a limited edition…
So you get it
So you understand that this is the one synth many of us have been pining to be remade. Those that owned them have seen the value of the originals soar to a couple of thousand quid (depending on which version), all the time smugly enjoying its original tones.

Those of us that enjoyed the music first time around just want to get our hands on something to re-enjoy them and convince everyone that we were well in advance when it came to music tastes. Very futuristic indeed.

Casing the joint
First things first and the Odyssey we get to test is the more widely available one in orange, and arrives in case and box pretty much as shown left. First impressions are great – we love the case (even though its innards have an odd ‘new’ smell) which offers great protection and mobility, although maybe the option of having ‘lead holes’ or a playing position would have been great so you can literally just take it on stage and play it from its case. It would certainly look cool if nothing else.

Build quality is sturdy although the on-off switch didn’t work as we thought. It powers on for sure, but requires you to hold it in for a while to power off. Not a problem, but you need to be aware of this as I initially thought it was faulty! Sliders and switches, on the other hand, are decent, responsive and not flabby and loose, nor too tight. 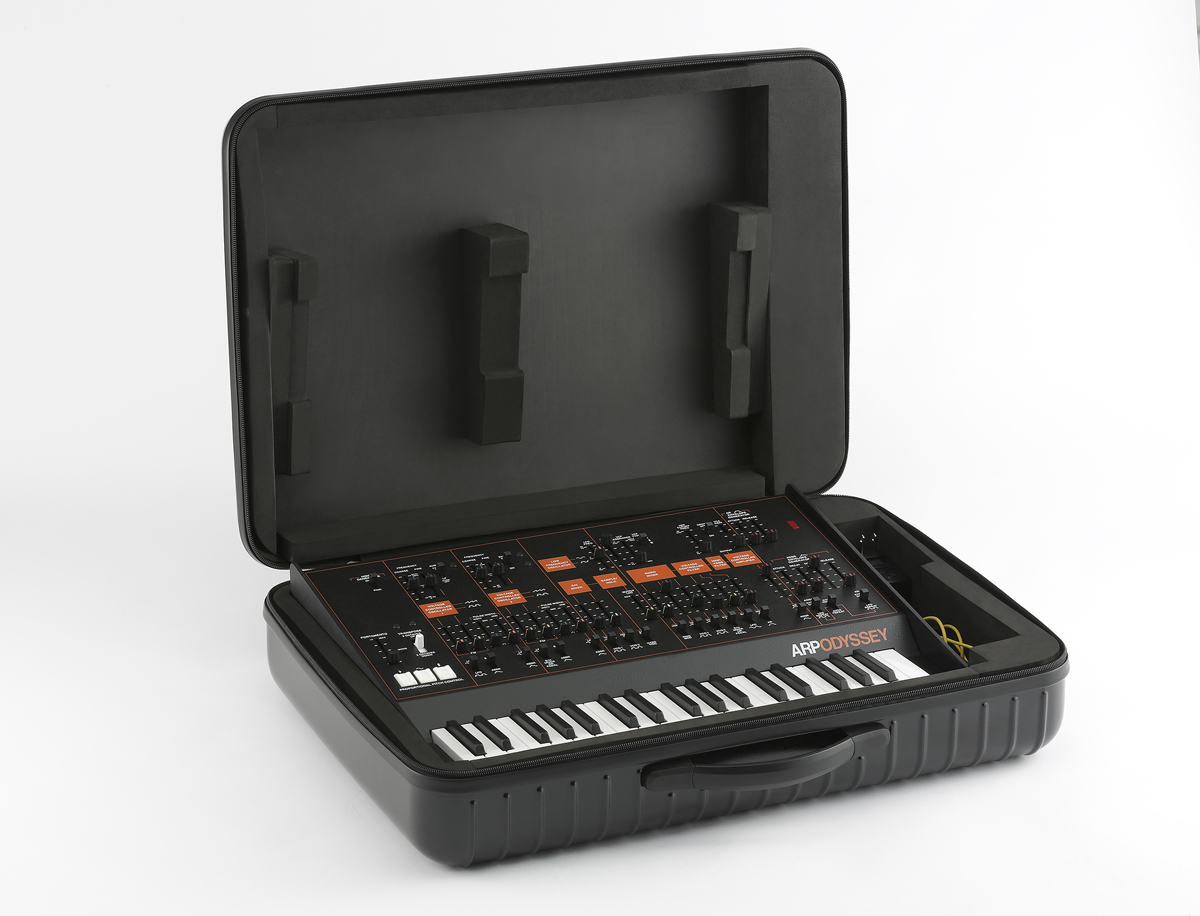 The new version comes with it’s very own case
The synth is set out in a logical way so now’s the time for a quick look over its architecture. It’s a two-oscillator (VCO) synth that’s set out in a standard synth oscillator, filter and amplifier way albeit with some added bells and whistles (noise, ring mod and sample and hold) to give it a unique character.

You start with the two VCOs which have FM depth plus pulse width and depth sliders. The FM section of each of these can be modulated with a sine or square wave (or s/h mixer or pedal for VCO2); s/h (sample and hold section); or the ADSR envelope. The pulse width of each VCO can be modulated by the LFO or ADSR. A noise generator allows pink or white selection and is also where more global pitch, transpose and portamento parameters are found. Next up it’s the LFO section which includes controls for speed and how much each
output from VCO1 (two sources) and VCO2 (or noise) enters the s/h mixer.

Then it’s the rather easier to understand mixer section. Here you simply adjust levels of the main sources (noise or s/h and two VCOs) or how the filter reacts to the s/h mixer, pedal or AR and ADSR envelope generators. In this section you also get the gems in the new Odyssey’s crown: the filters. First up you get VCF filter and resonance controls for that instant sound mangling, plus a high pass frequency slider.

The two new controls are the filter selector which switches between the three filter types I mentioned above, and the Drive control which promises that the sound will have far more bite. Finally, you get sliders to adjust the parameters of above said envelopes. Which might sound a touch complicated.

Actually the architecture I’ve just described is fairly basic for an analogue synth, even though it might be a series of ‘Os’, ‘As’ and ‘Fs’ to the uninitiated. What you essentially have are three/four selectable sources, lots of modulation and lots of filter action, so there’s plenty of routing, plenty of wobbling and, on paper, plenty of sonic variation. Which I’m happy to announce, as with the original, is what you end up with.

Like the original, all of these parameters may be twisted and turned, to make some harsh, mellow but mostly penetrating sounds all helped with its dual polyphony, oscillator sync and, now, the added drive and filter types. And these last two features are important because, actually, the new ARP is, in some ways, more sonically capable than any of the three original versions simply because you can select different filter types.

While David Friend may have been on hand to replicate everything on a circuit level (and we’ll compare old and new shortly) it’s the bonus filter types – and that drive circuit – that could set this new machine apart and give it something of its own character (rather than ‘just’ emulating the original).

The first type is a 12dB/octave circuit that delivers great punch and presence. Type 2 (24dB/octave) meanwhile sounds (to these ears) a little mellow and more unstable when you push the resonance. Type 3 is a bit more as you’d expect from an analogue synth: more stable and predictable. To hear the difference simply play something and switch between the three types using the resonance slider. It is very noticeable and offers a tantalising window on the differences of the originals, so gives this new Odyssey at least one thing to boast over its predecessor(s). As does the Drive circuit. This makes the voltage controller amplifier distort somewhat delivering more of a snarl and, some might say, analogue character by simply beefing up the output signal. 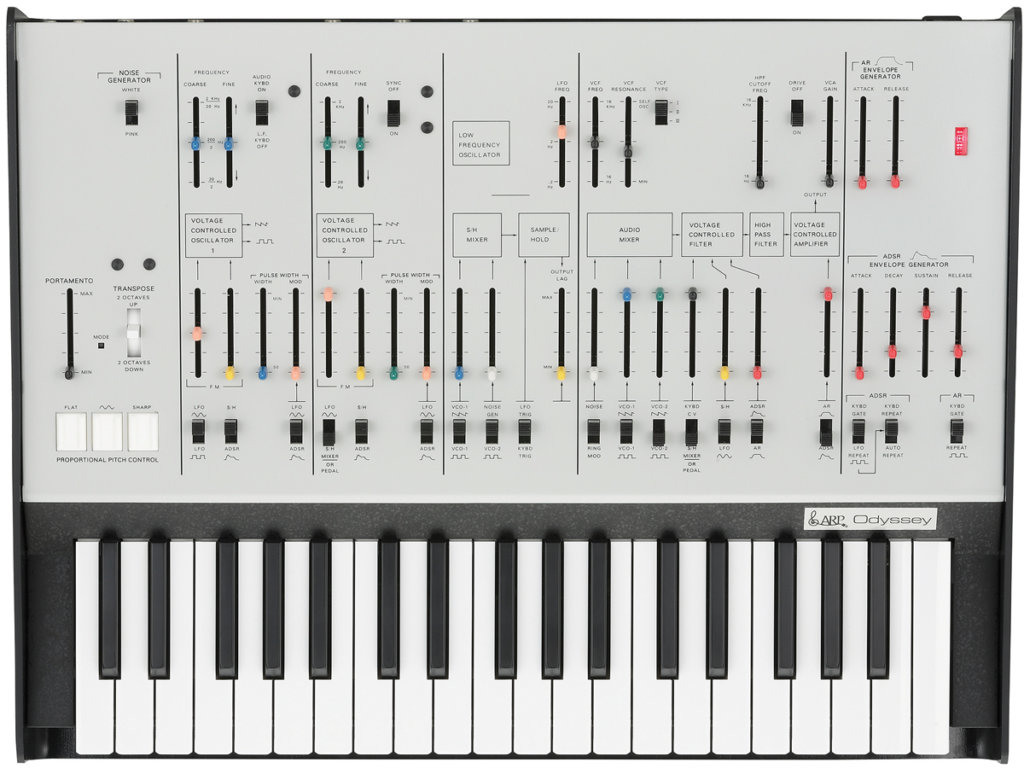 On to the sounds, then, and I was quickly up and running. Not, of course, by dialling in presets, but creating sounds from scratch (so be prepared for a bit of leg work). The simplest starting point is to introduce both oscillators with a slight amount of detuning at first and then use the first to get the second in tune – maybe an octave apart so you can easily hear what’s going on.

Then you simply start modulating a little, imposing some envelopes and adjusting the frequency for a variety of sounds. And what you get is pretty much what any historical Odyssey user would expect.

With both VCOs separated in turn you can get some searing and cutting sounds and when you start to modulate just one, sounds with a lot of movement and attitude. Bass is catered for incredibly well and it’s advisable to switch between the filter types to experiment here, especially with the filters. Overall, though, this is much less a mellow and deep experience than you’d get from a Moog and more a raspy and in-your-face one. Not to everyone’s taste, but certainly if you want analogue attitude, it’s here.