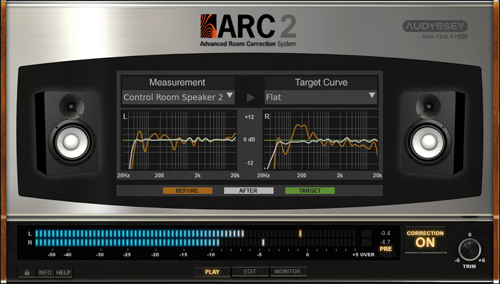 The ARC system, from IK Multimedia, is claimed to be the first DAW-based acoustic room-correction plug-in with 64-bit native plug-in compatibility.

The system is based on Audyssey MultEQ XT32 patented technology that is designed to correct frequency and phase distortions. This promises improvements in clarity, stereo imaging and frequency response as well as faster and more reliable mixing. What’s more, the processing can be applied in any room irrespective of the monitors it is fitted out with. Consequently, IK Multimedia see travelling engineers as potential users.

So what’s new in version 2? For starters, the interface has been completely redesigned for improved usability and the resolution is four times greater for enhanced response in the bass end with a more natural sound in the midrange and high frequencies.

The new combined left/right correction option maintains perfect focus with symmetrical control rooms, and customisable target curves enable the response to be matched to the engineer’s personal taste. “Virtual Monitoring” is an interesting feature that mimics the sound of various popular studio monitors, in-car audio systems, boom boxes, iPod docks and more. You can therefore accurately gauge how your mix will translate without having to burn a CD and take it out to the car.

Setting up the system also seems easier than last time (we reviewed the original back in Issue 61, April 2008). A recording-quality omnidirectional microphone is supplied with the package, and the instructions recommend a minimum of seven locations for conducting test measurements. The software guides you through the procedure and we experienced no problems whatsoever.

Once the set-up process is complete, you can name and save your preset and choose a corresponding speaker icon to go with it. To use the ARC 2, select it as the final plug-in across the master output channel of your DAW. The ARC 2 also acts as a virtual controller, having a volume control, mute and dim switching.

Although it’s entirely subjective, we experienced varying degrees of success, and much depended on the speakers we used when balancing each mix. In some cases our mixes translated to other systems more satisfactorily when they were done without the ARC 2. The ARC 2 mixes were a little tighter in the lows, but the unprocessed mixes were smoother and more full-bodied through the midrange and sounded closer to what we were hearing in our studio.

Traditionally, monitor response adjustment was made using a combination of graphic equalizers, crossover adjustment and acoustic treatment. Since the ARC 2 plug-in gets strapped across the master channel of your DAW it effectively fine-tunes the response of your monitors. However, everything you mix gets processed because the ARC 2 is applied to the mix buss rather than just the monitor path.

One of the golden rules of analogue audio was that if a signal didn’t need to pass through a particular piece of equipment or section of circuitry, then you should attempt to bypass it. That certainly made sense when every extraneous gain stage added unwanted noise and distortion, but do the same rules apply to digital audio?

Some may feel slightly uneasy about processing entire mixes to compensate for room acoustics and the vagaries of any given set of monitors. However, these observations have more to do with the concept behind the ARC 2 rather than the functionality of the product itself. Perhaps our results were misleading because we know our mix room and our monitors very well. Attempting mixes in an unfamiliar room using a random set of monitors may have been more illuminating.

Learning the response of a room and monitors is a basic engineering skill and a standard process. Then again, if you are working against the clock in an unfamiliar room without your usual set of speakers, the ARC 2 could be exactly what you need and the Virtual Monitoring feature is very useful. The ARC 2 delivers exactly what it promises and more, but the fact remains that it’s a ‘workaround’ rather than a genuine fix.

An intuitive software-based system that offers an effective workaround for imperfect monitoring conditions.