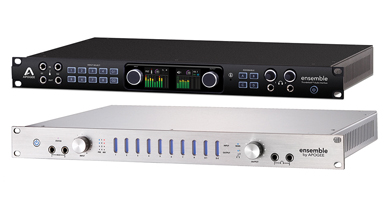 Apogee has updated the Ensemble with Thunderbolt 2 and a host of brand new features. Mike Hillier scales the heights… 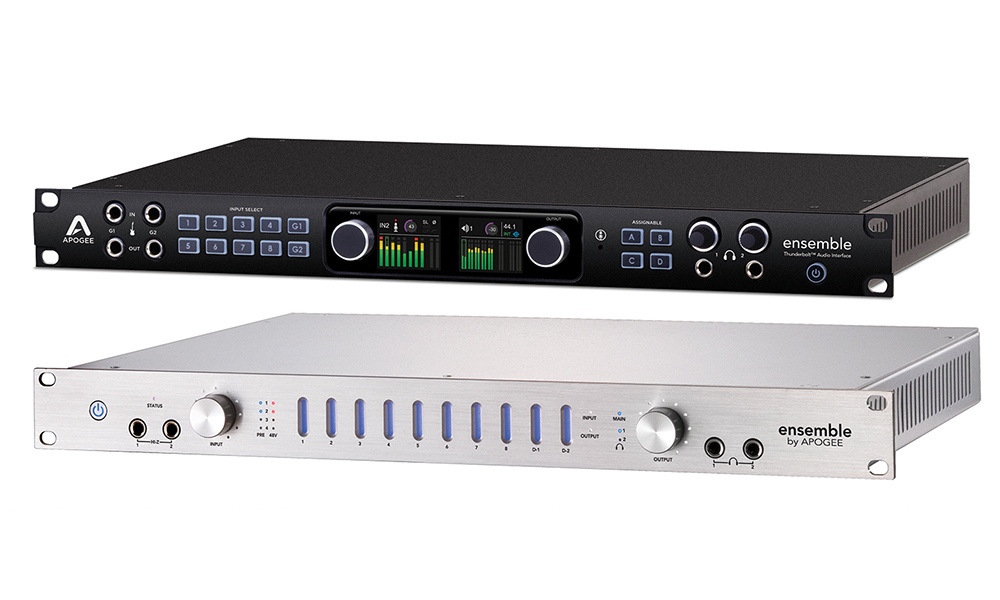 Apple has completely dropped FireWire in favour of Thunderbolt on new Macs – however, Thunderbolt is still absent on most consumer PCs. Some custom PC manufacturers and many adventurous PC builders have added Thunderbolt ports, but if they were hoping to use the Ensemble they’d best turn away now, as Apogee has only written Mac OS drivers for the unit.

The drivers it has written however, are something special indeed. Eschewing standard CoreAudio for custom drivers, Apogee has managed to get latency down to a staggering 1.1ms at 32 samples.

Gather Round
The Ensemble Thunderbolt is well equipped when it comes to I/O. The back panel houses no less than eight analogue inputs, the first four of which are on XLR/jack combi ports, while the last four are XLR only. On top of which, the first two channels have send and return insert points on jacks. Analogue inputs 9 and 10 are actually a single doubled mono signal from the built-in talkback mic on the front panel, and 11 and 12 are the front hi-Z inputs, adding up to a slightly confusing 11 total analogue inputs. 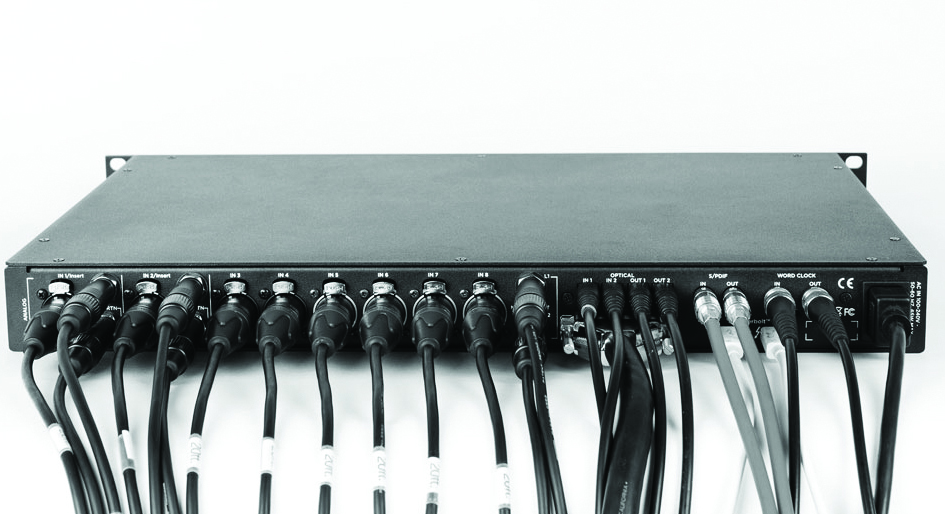 Analogue outputs are a little simpler, with two balanced TRS outputs, a D-Sub for outputs 3-10 which are all on the rear, and 11 and 12 are again the front panel guitar outputs. Additionally digital I/O on the rear includes two ADAT/SMUX/SPDIF optical ports in each direction as well as a pair of co-axial S/PDIF ports.

BNC Worldclock I/O is also included alongside two Thunderbolt 2 ports – enabling you to daisy-chain the Ensemble Thunderbolt with other Thunderbolt devices or a display. Two headphone ports on the front round out the connectivity options, each with its own dedicated level control.

At over £2,000 for the Ensemble Thunderbolt it’s a little disappointing to discover that it doesn’t come with a Thunderbolt cable – Sonic Distribution had to send one over separately. Thunderbolt cables are still fairly pricey – at the time of writing the Apple Store stocked a 2m cable for £35 – but leaving one out of a £2,000 device is unnecessary penny pinching.

Avengers Ensemble!
The Ensemble Thunderbolt can be controlled directly on the interface. There are buttons to select each of the ten analogue inputs (excluding the talkback), and a dial to adjust gain. To change settings on an input, hold the button and you enter a menu, which you can adjust to change input level, soft limiting, polarity, filters, etc. The options change slightly depending on the input. Additionally, there are four buttons, assignable in the Maestro software, which can also be used to control the hardware. By default they control mono/stereo playback, meters, talkback and headphone mute.

The eight mic preamps sound incredibly clean. They use what Apogee calls Advanced Stepped Gain, which switches between multiple op-amps to achieve the cleanest possible tone. While one op-amp might have great performance at low-levels, it might start to break up with more gain, so the Advanced Stepped Gain automatically switches to a different op-amp enabling each chip to only work in its optimum range.

The results are stunning, with up to 75dB of gain and an incredibly low noise floor. If you’re looking for colour on your preamps however, look away. These are clean and clear all the way.

The guitar inputs are a different story: to give a more tube amp-like performance the two guitar inputs use Class A jFET circuits to subtly enhance the signal. This is very subtle however, just enough to make amp simulators shine, rather than replace them entirely. The guitar I/O has two modes.

The first and most obvious is to use the outputs as separate re-amp outputs, sending a pre-recorded signal out of the DAW at guitar-level into an amp, or even just a guitar pedal and back in via the guitar inputs. The second mode is for real-time use, and enables you to simply track the dry, DI’d signal, while routing to an amp, using the output as a “thru”. 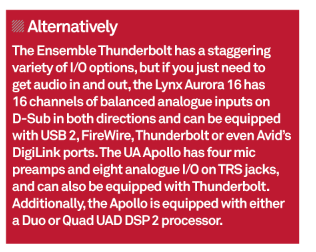 We’d love to see more interfaces incorporating this kind of I/O option, as we frequently use guitar pedals while mixing, on sources as varied as drums and vocals to get some colour that wouldn’t be possible with plug-ins or conventional recording gear.

The Ensemble Thunderbolt is a fantastic interface – it has plenty of I/O options, making it ideal for high-end project studios. With this, and only a couple of other choice bits of outboard, you could be very well set up to record almost anything. 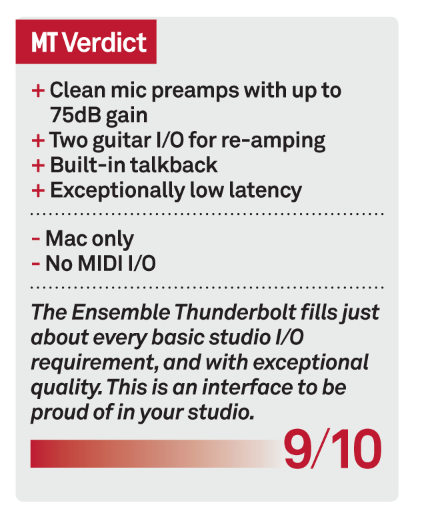