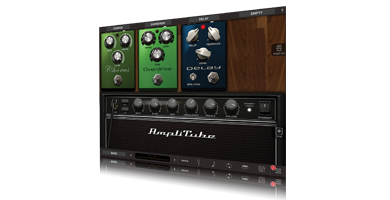 Using your iPad as a guitar suite is now a popular way to perform. Hollin Jones tests out AmpliTube 4… 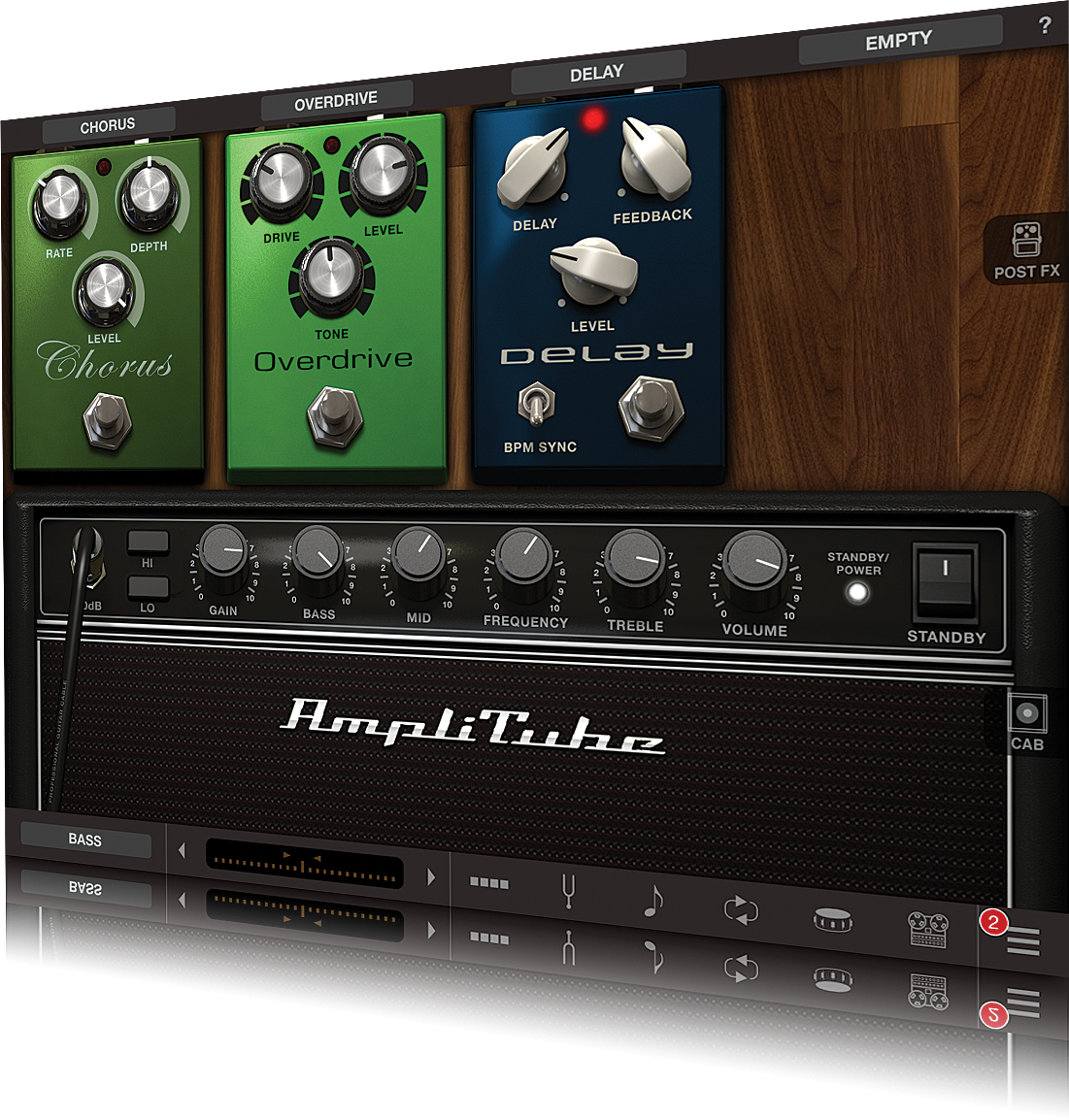 IK has spent the last couple of years creating iOS versions of some of its desktop audio processing applications, which makes sense given how many iOS input devices, such as MIDI keyboards and guitar interfaces the company also makes. AmpliTube 4 is a re-engineered version of the guitar suite that runs on recent iOS devices and uses DSP from the desktop version, improving the sound quality.

Somewhat confusingly, there are two versions of AmpliTube 4, for iPad and for iPhone/iPod Touch. While functionally identical, these are separate and identically-priced purchases, which is a bit of a shame since you might hope that buying one would give you access to it on both sizes of device, as is sometimes the case. In-app purchases are shared between versions, which is a plus.

On the Tube
Your initial purchase gets you the base set of processors; and the interface has been refined and looks great. There are four guitar amps and one bass, with matching cabs that can be mixed. Four pre-amp and two post- effect slots are available, with a decent selection of stompboxes to drop into them. Amps and effects can be modified by dragging with your finger, and it’s also possible to connect MIDI controllers such as IK’s BlueBoard or a generic MIDI controller via a MIDI interface.

MIDI learn is supported for important parameters such as recording, changing presets, looping and activating the tuner – all of which are handy for using the app in a live setting, so you don’t have to keep fiddling with your iPad.

Although the app can obviously use your device’s onboard mic for input and speakers for output, realistically you’re going to want to add a more robust way of getting sound in and out. This might be one of IK’s solutions, such as the iRig, or one of the increasing number of small desktop interfaces that now have combined Mac, PC and iOS compatibility. Even newer to the market are systems such as Music IO that enable you to incorporate your iOS devices much more easily into your desktop DAW, say for processing regular tracks using effects running on the iPad.

There are some handy features included with your initial purchase –a tuner; an audio player that can import songs over Wi-Fi, file sharing or from your onboard music library with looping and variable speed playback for jamming or rehearsal; and the Loop Drummer feature, which can play back preset beats with fills and variations, for you to jam along to. A single-track recorder is also supplied, as well as a choice of two virtual mics in the cab room. So your basic purchase gives you a decent selection of processors and the ability to rehearse, tune and play along to loops, with a single track of recording available. 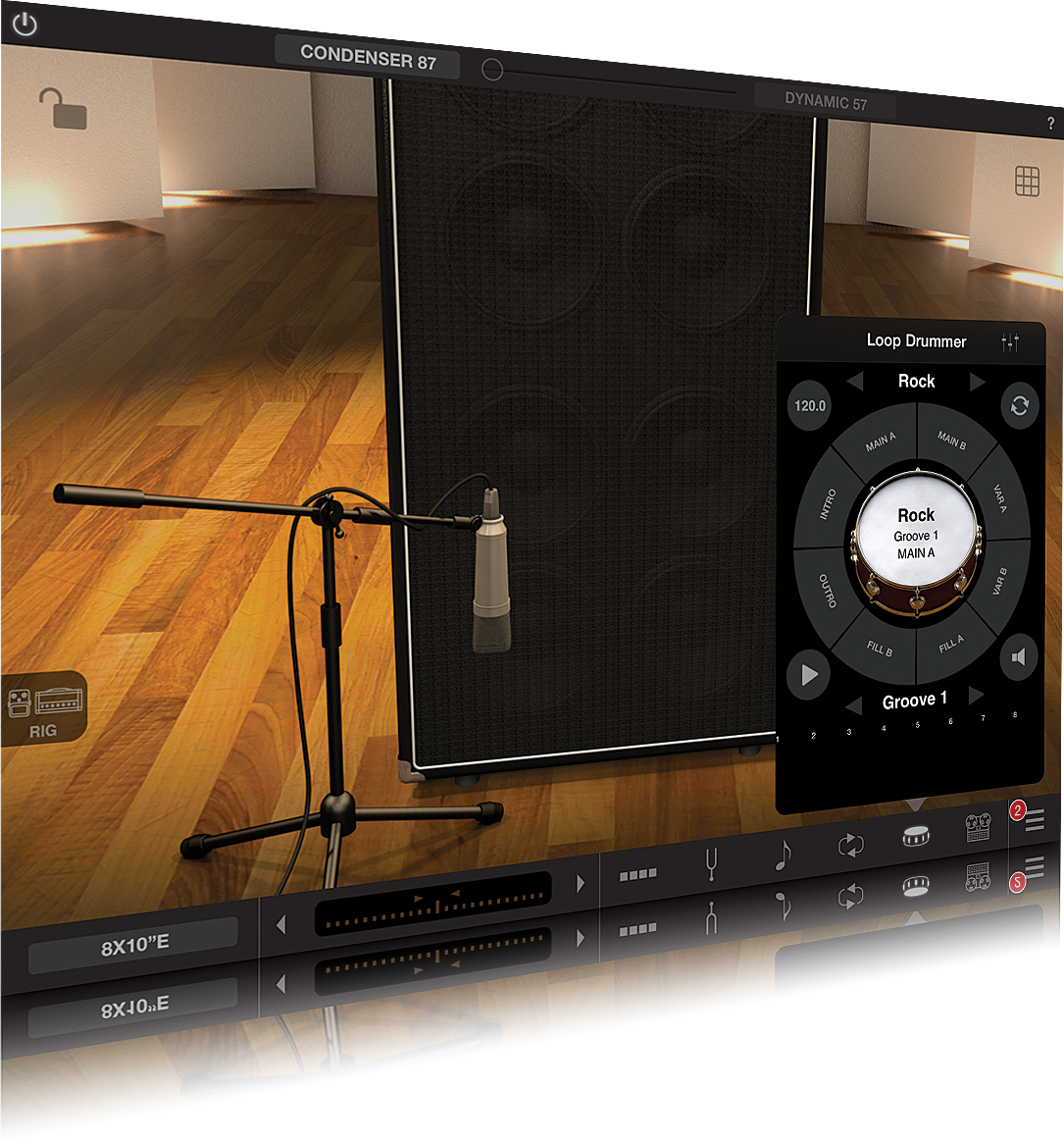 Added Extras
There is a lot more functionality, but most of it is found in in-app purchases. There are ranges of additional effects, amps, cabs and mics that can be added, though each requires an individual or bundle payment. These range from a couple of quid up to £40 for everything, including the multitrack recorder. This isn’t new, though disappointingly one of the much-touted new features – the ability to move your virtual mic around and add a second for stereo processing, is an extra.

Paying £7.99 just to be able to move two virtual mics around feels like pushing the boundaries of what users will want to spend. If you plan on buying more than half the extras, you may as well go for the total bundle and add the lot. That would take your spend to £55 which, as good as this app is, is a little steep for an iPad app. For the sake of balance, there is a free version available too, though its functionality is more limited.

Amped Up?
AmpliTube 4 is a great app, and sounds authentic and powerful. It also has some great features such as MIDI control, the song player, looper and drum accompaniment. Add a decent method for getting sound in and out of your device and it’s an excellent way to have a guitar setup at your fingertips.

The design feels slick and responsive, although at the moment there’s a bit too much hidden behind paywalls. The economics of app development mean paying for extras is commonplace. It would have been nice, though, if IK Multimedia had thrown in a few more things as standard, particularly the mic placement feature 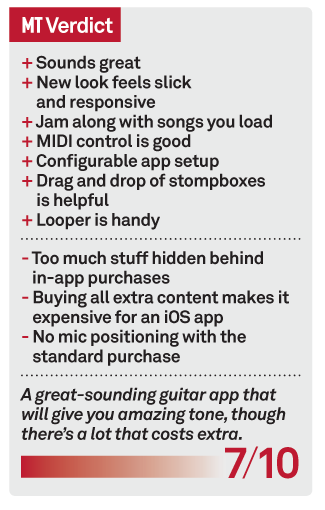