Again, it’s an all-British production recorded at London’s Air Lyndhurst, but this time the material is more generally suited to small-scale film work for which a more sensitive approach is required. As well as the strings the library contains a variety of unusual ensembles, percussion, loops and pads, all with a very British and sometimes […]

Again, it’s an all-British production recorded at London’s Air Lyndhurst, but this time the material is more generally suited to small-scale film work for which a more sensitive approach is required. As well as the strings the library contains a variety of unusual ensembles, percussion, loops and pads, all with a very British and sometimes eccentric flavour. Four mic positions are available, which can be mixed in the free Kontakt Player used to run Albion. 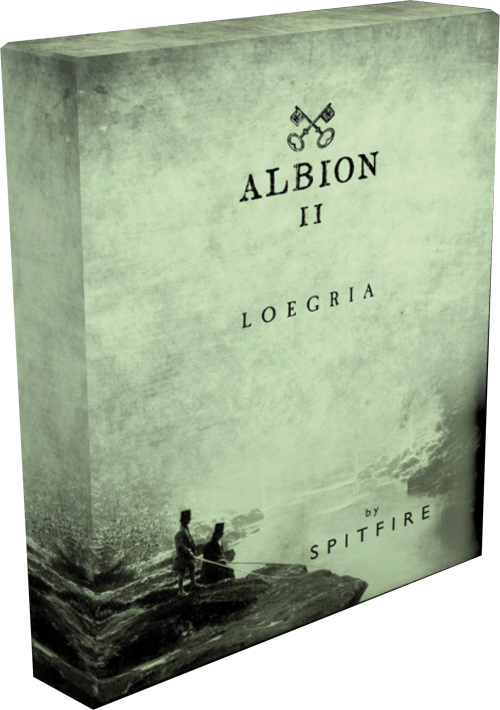 With its big, cinematic sound, Spitfire’s first orchestral library, Albion, was an instant success with many composers. The huge-sounding string patches, in particular, were very impressive. It’s no surprise, then, that the follow-up, Albion II Loegria, by way of contrast features a smaller string section.

Strings are the mainstay of any cinematic library and the sections here consist of eight first violins, six second violins, four violas, four cellos and three basses. Recorded in situ, left to right, they are loaded as just two patches: high and low strings. Unlike in Albion I, keyswitches are used to access the various articulations, and in keeping with Albion II’s delicate approach staccatos are light, con sordinos are super-soft, pizzicatos are loose and the longs (sustains) are soft and mellow.

The guys at Spitfire are film composers themselves and they know exactly what’s required of a library of this type. To that end they’ve chosen the articulations very carefully, excluding anything unnecessary like bass trills. Legato ranges, too, are restricted to an instrument group’s ‘sweet spot’ although not everyone will be happy with high legato string transitions that stop on G4 (G just above the treble stave). However, although they haven’t recorded more transitions, Spitfire is working on an update that will extend these legatos to their full range. It should be available by the time you read this.

Beautifully played and recorded with a generous amount of hall ambience, these strings have a delightful airiness and are ideal for lighter compositions where a full-size orchestral string section might sound too thick. However, while just two patches – highs and lows – work fine, five individual sections would obviously be more flexible.

With brass and winds already well represented in Albion I, Spitfire decided to include a selection of unusual ensembles from those categories in Albion II: a very British euphonia and horn choir, high and low sackbutts, and high and low recorders. With a similar haunting tone, the sackbutts are intended as an alternative to orchestral horns. Switch to the marcatos, though, and they make a glorious rasping sound.

Slightly out of character here, the Darwin Percussion Ensemble II, a continuation from the original Albion, is a heavy-duty set of cinematic drumming. It’s thunderous stuff and the Easter Island Hits are truly massive. Another update, Stephenson’s Steam Band II, is a set of alternative orchestra pads and FX featuring all-new material derived from Albion II’s content.

The Byron Tapes, though, is an entirely new idea. Spitfire booked a small combo consisting of piano, string bass, percussion, drums, guitar, violin and cello and recorded them to tape. After editing and mastering, the result is very a British, often quirky collection of loops. With a predominately 60s feel and titles like Kings Road Groover and MI5, these short, catchy loops are perfect for retro-style productions.

If you’re already a fan of Albion I you will almost certainly fall for Albion II, which makes a great accompaniment library. The smaller strings, for example, are the perfect foil for Albion I’s larger sections. It’s a matter of taste but maybe fewer FX/loops and more orchestral content would be more useful. That said, this is a fine library of its type that’s worth buying for the beautiful-sounding strings alone.

+ Excellent strings (including half sections for division)

– Mixed instrument ensembles would be good

With a beautiful, intimate sound, this library is ideal for indie film work or any ‘broad-brush’ orchestral score where a delicate approach is required.