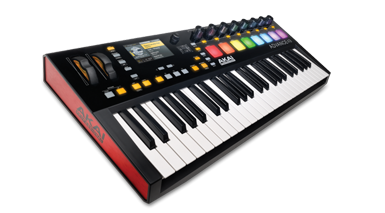 The Advance Series from Akai certainly looks like a bold, new set of keyboards, but its software attempts to blur the lines between hardware and software and revolutionise the way you control your instruments. Andy Jones feels VI 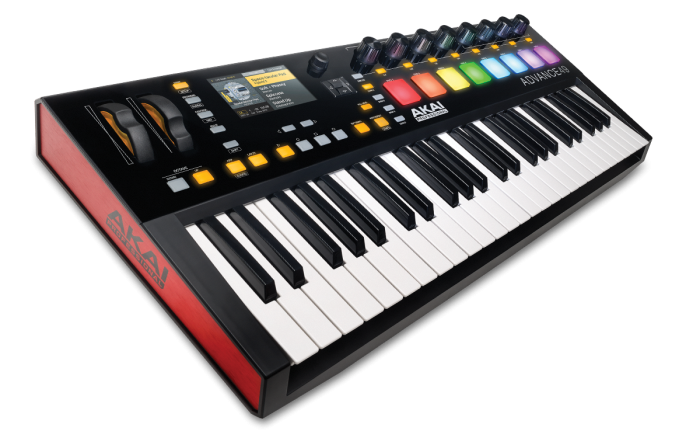 I do hope that you’re paying attention. The world of gear for music making is a fickle place and there are some pretty seismic things happening right now. It has become so changeable, though, that anything could happen, and probably will. But as we’re at the centre of ‘things’ music technology related, we like to think that we have a pretty clear picture of what’s emerging and where our studio technology is going.

And products such as Advance 49 look like being a part of it – a big one at that. Before we explain why, a recap of the last 40 years might be in order (don’t worry, it’s quick).

So, in the 70s everything was analogue. It sounded great but was a pain in the arse to use. In the 80s everything went digital. It was much easier to use but sounded shocking. In the 90s computers came along to save everything and everyone. And during the noughties everyone thought they were doing just that, so everyone became saved. Mostly with laptops.

But then the tens happened. Do we even call it the tens? Whatever. The ruddy tens. A time when analogue is back in fashion. Where everything sounds incredible. But is getting easier to use. Where some people like tape and vinyl. Where others like Pro Tools and digital. Where most people listen to MP3s but most producers need kHz/MHz a plenty. A time where, well… anything goes. 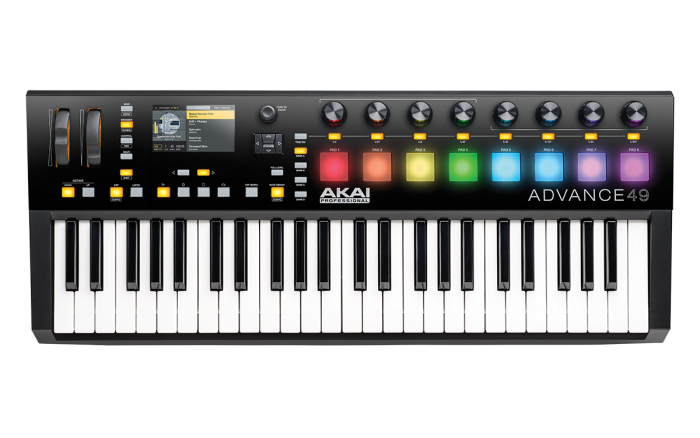 One thing that is certain, though, is that hardware has made a comeback like no other and that today’s studio sounds great, is colourful, looks incredible and, thanks to an increasing number of companies like Native Instruments and now Akai, is incredible to use. Computers are still at the heart of everything, of course, but the front end looks more traditional, feels more like hardware, and is consequently often more creative.

So that’s where we are. In an age where we’ve used computers to give us everything and now we are turning away from them in favour of the old ways – but still expect them to be there for us should we need them. Like I say, we’re a fickle bunch. We want the best of everything. But we do seem to be getting it…

So, the tens will hopefully be remembered as the decade where we (finally) got it right. Where classic gear blended seamlessly with software, where virtual instruments acted real and where we really did enjoy the ease of software with all the tactility of hardware. Which leads me nicely (again) to the new Advance keyboard range from Akai. The company behind it thinks this range is important, that it is probably the most (ahem) advanced and ground-breaking thing that Akai has done since a certain S-series sampler. It even hired out Real World studios to tell us about it (and the free food was exceptional).

And the demo there made us believe that this range is important too. Because, like Native’s Komplete Kontrol S Series, the new Advance range takes software and (kind of) turns it into hardware. It offers a keyboard that you use in favour of your computer screen and it offers control over a swathe of software titles. Only from the demo we had, it *whisper* seemed to do it slightly better than Komplete Kontrol…

No Screens
There are many reasons why using your computer screen less to produce music is a good thing, not least because you might start to listen to it more rather than look at blocks on the screen all the time. The Advance series doesn’t lose your screen altogether, though; it essentially moves it from your computer to the keyboard, replacing it with a superb LCD screen which gives you an overview of what your software instruments are and what they’re doing, all by way of a piece of software called Virtual Instrument Player (VIP).

The software comes bundled with the keyboard as a 4GB download (part of a 16GB/10,000 sound bundle which we’ll come to) and is designed to sit in or out of your DAW acting as the interface between it and the keyboard. It’s like a bridge from the Akai to any and every virtual instrument ever made. Apparently

Akai has a team of programming elves dedicated to making sure VIP talks to every – or, as they say, ‘virtually every’ – instrument that has been released and every one that will be released… 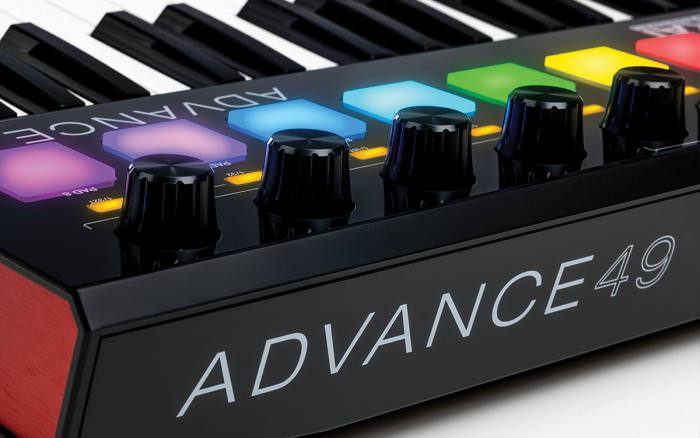 We admit to being suckers for flashing, coloured lights, but the knobs are pretty special as well

Like Every Good Demo
Like I’ve said, the demo at Real World really did impress so let’s get straight into it to see if I can be as slick.

Firstly it’s a case of downloading the VIP software, which was not as straightforward as I thought it would be. After a few minutes I realised I had to register the product before I could get access to the software but then it’s a download including that swathe of extras I mentioned.

You then simply enter a registration code before authorisation via your hard drive (iLok is an option I thankfully didn’t have to pursue, having had all sorts of problems with it in the past).

VIP works as a standalone application or within a DAW. I installed it (a slightly longer process than you might expect) and then booted Logic up and loaded it in as a ‘regular’ plug-in, selecting it as an instrument within a new MIDI track. Hey presto, it worked straight out of the box with some of the bundled plug-ins.

The process to find the instruments is quick, and the process to manage the presets a little longer depending on the number you’ve installed. In my case, and as I was using the MusicTech test machine, there were some 20,000 presets to ‘manage’, but even this took less than minute. And once you’ve scanned them… we’re there