De-essing isn’t one of the sexier areas of mixing. Engineers don’t usually get excited over a new de-esser like they would a new compressor or EQ, and we’ve never been privy to a pub conversation about the relative merits of different de-essers over a pint mid-session. In fact, from our experience, many engineers don’t know […] 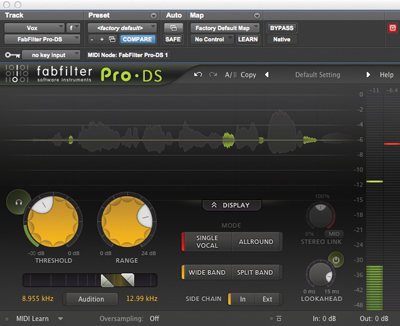 De-essing isn’t one of the sexier areas of mixing. Engineers don’t usually get excited over a new de-esser like they would a new compressor or EQ, and we’ve never been privy to a pub conversation about the relative merits of different de-essers over a pint mid-session. In fact, from our experience, many engineers don’t know how, when or where to use a de-esser. Those who do will usually have only one that they know well enough and that works, whether this is the one that comes with their DAW or a third-party plug-in.

However, we have to admit that when we first read about FabFilter’s Pro-DS we couldn’t wait to get our hands on it. Here is a de-esser with a comprehensive set of features including mid-side processing – useful for de-essing during mastering as well as for high-frequency processing of non-sibilant sounds such as splashy cymbals or piercing guitars. This is married to a user interface that aims to make setting up the de-esser as simple as possible, with a waveform view showing you when the de-essing is kicking in and a sidechain input meter that highlights prominent frequencies, enabling you to dial in the right settings.

The most common use for a de-esser is on a single mono vocal channel. Sibilant sounds – not only Ss, but also Ts and Ds – can become quite prominent in a mix as compression, analogue saturation effects and reverbs are added to the vocal. We usually place a de-esser after any vocal processing such as EQ or compression, but before reverb sends, though we know some engineers who prefer to place it earlier in the chain but don’t set the parameters until after the later processes have been set. We find that this leads to a certain amount of chasing your own tail as changes to the de-esser later impact the compressor.

In this basic role the Pro-DS excels. The plug-in has a ‘Single Vocal’ setting with intelligent sibilance-detection algorithms and we could hear the Pro-DS accurately pulling out sibilant sounds even before we started fine-tuning the settings. Tweaking the parameters is incredibly easy as you can see the impact your settings are having on the signal in the waveform view and use the sidechain EQ meter to see where the most energy is to focus the de-esser’s behaviour on a specific frequency band. In under a minute we had isolated problem frequencies with the sidechain and set the threshold so that only the problem sibilance was being compressed.

The range control enables you to determine how much compression is applied to the signal. Set this too high and your singer will start to sound lispy as all of the energy is taken out of the S sounds; dial it down and the Pro-DS sounds very natural.

There are two compression types available within the Pro-DS: a Wide-Band typical compression mode and a Split Band mode, which compresses only the problem frequencies as defined by the sidechain. In the case of mono vocal recordings it’s worth checking both modes to see which sounds the most natural when bringing down the sibilance.

In addition to processing vocals in solo, de-essers are often used by mastering engineers to bring down sibilance in a track that hasn’t been de-essed enough during mixing, or for when mastering compression has brought the sibilance back up. Not all de-essers are as good at this task, and many can pump or suck out too much high-end. Using the Pro-DS in Split Band mode is one way to improve its performance in a mastering situation, but another is to use its mid-side tools to focus on the centre channel, where the vocal is likely to be located, de-essing the middle while leaving the sides untouched. We were recently given a goth-rock song with plenty of reverby sibilance to master and the Pro-DS handled it brilliantly. Because the song was already dark with little happening in the top end we were worried that a de-esser might pull more high-frequencies out. The Pro-DS let us target the problem frequency in the mid channel and pull it down without at any point affecting the rest of the mix.

+ Incredibly easy to use

The Pro-DS is one of the most powerful de-essers we’ve come across and yet remains one of the easiest to use.