Yamaha has just debuted their latest flagship series of synths, the Yamaha MONTAGE. Yamaha say that the MONTAGE is the “meeting of generations”  With the MONTAGE set to “re-define the criteria for stage and studio” Official info below: For more than 40 years now, Yamaha has created synthesizer milestones – from the revolutionary DX7 in the […] 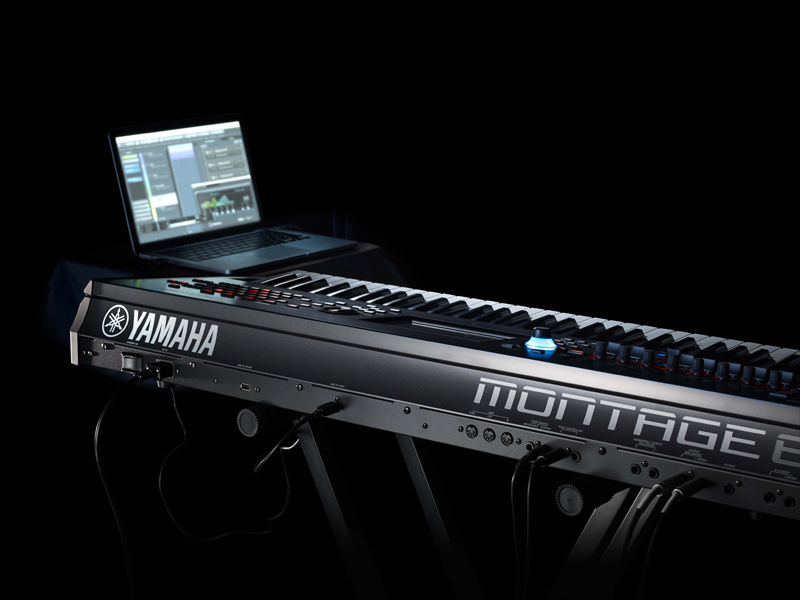 Yamaha has just debuted their latest flagship series of synths, the Yamaha MONTAGE. Yamaha say that the MONTAGE is the “meeting of generations”  With the MONTAGE set to “re-define the criteria for stage and studio”

For more than 40 years now, Yamaha has created synthesizer milestones – from the revolutionary DX7 in the 1980s to the legendary MOTIF series, Yamaha has set the standard with its FM and AWM synthesis.

Now it’s time for a meeting of generations: With MONTAGE Yamaha presents a unique flagship synthesizer and re-defines the criteria for stage and studio. Its Motion Control Synthesis Engine, combining FM-X and AWM2 Tone Generators with controllers, allow completely new interaction with sounds and sound shaping, making MONTAGE one of the most flexible synthesizers of all time. At the same time the instrument is a dream machine for all songwriters and keyboardists and comes with 61 or 76 keys with synth action and with 88 keys with weighted hammer action.

Fusion of AWM2 and FM-X – the Motion Control Synthesis Engine The Motion Control Synthesis Engine of MONTAGE unites two legendary tone generation systems. By combining AWM2 – with its Waveform-based Subtractive Synthesis and FM-X – a modern version of FM synthesis with legendary roots, a unique expressiveness is created. With FM-X the new MONTAGE relies on the most powerful FM engine of all time.

This enhanced sound generation in tradition of synth legends of the 1980s still offers a unique dynamism, power, and fascination. With eight Operators, 88 Algorithms and seven Spectral Forms, MONTAGE offers tremendous power. For comparison: The legendary Yamaha DX7 of 1983 had six Operators, 32 Algorithms and simple sine waves. With Spectral Skirt and Spectral Resonance FM-X also allows the widening of the harmonic curve and the shifting of the harmonic peaks.

Along with Filters, EQ, an additional Common LFO and the effect department – a new dimension of FM sound-design is created. Due to its long-term development by Yamaha, AWM2 offers realistic reproduction of sounds with maximum data compression.

MONTAGE offers a 128-fold stereo polyphony with ten times the Waveform capacity of the MOTIF XF. Through this advanced architecture more Samples can be used per instrument, which allows an absolutely authentic and nuanced sound. Both engines can be played on the keyboard in up to 16 Zones and Layers in a MONTAGE Performance. A completely new interaction with sounds MONTAGE offers a completely new controller range for intuitive sound manipulation.

With the help of Motion Control it is possible to create unique, powerful, and dynamic sounds. This is ensured by the interaction of the Super Knob, the Motion SEQ, and the Envelope Follower. 2 of 3 Super Knob – The Super Knob can control one or a number of parameters in every imaginable way and in parallel. This allows the user to creatively manipulate a sound with just a single twist of the Knob. Even the character of a Performance can easily be changed from warm and atmospheric to punchy and rhythmic. 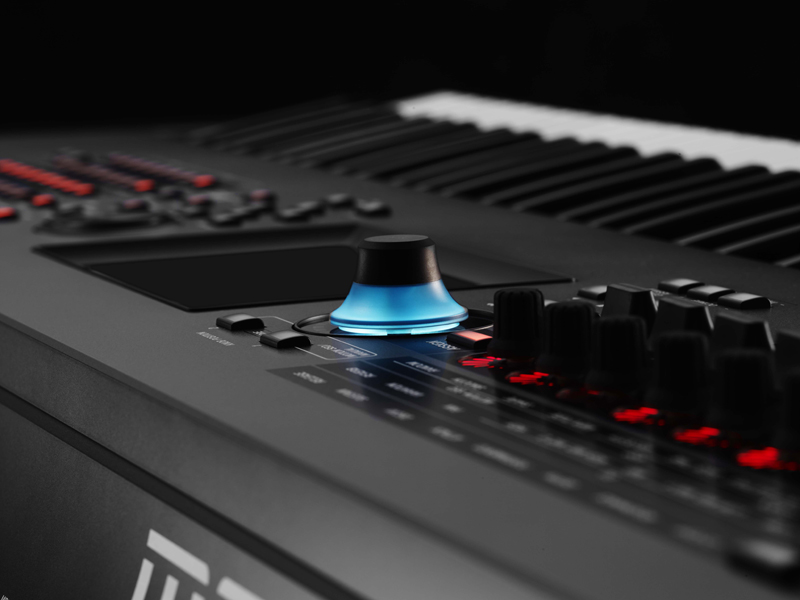 Motion Sequences – The new Motion Sequences allow the user to influence a Performance in sync with the Tempo. Perfectly in time they manipulate any parameter of a synthesizer and thus create a particularly dynamic sound. Envelope Follower – The Envelope Follower uses an audio signal as the source for the dynamic control of parameters. For example, a drum loop can control its own effect parameters in sync with the beat, or vocal recordings can generate a “talking synthesizer” – creativity knows no bounds.

Both instruments were elaborately sampled and made playable. The MONTAGE sound library also features a variety of new wood and brass instruments and an extensive string section. The sound stock of MONTAGE also includes synthesizer sounds from the DX and TX product families. It is even possible to import Voices from these legendary models via special converter software. Moreover, MONTAGE also loads Voice files from the MOTIF ES/XS/XF. MONTAGE provides a high-speed Flash Memory for your own Samples and synthesizer Libraries that are provided on yamahasynth.com The right choice for stage and studio MONTAGE is as much at home on the stages of the world as in songwriting suites and studios. 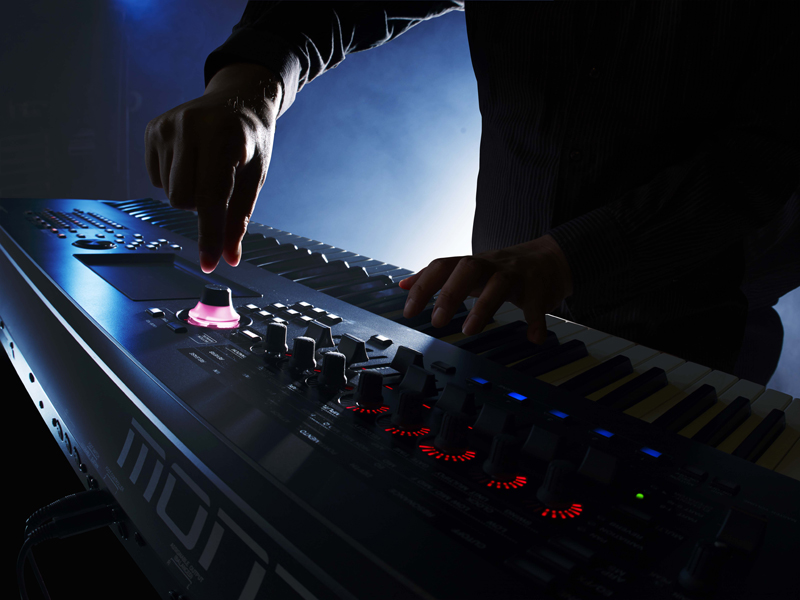 The instrument provides unique connectivity for perfect integration “on stage” and in the studio. The functions ‘Live Set’ and ‘Seamless Sound Switching’ are perfect for the stage: While Live Set allows you to intuitively organise the Performances for your gigs, Seamless Switching Sound provides a change of Performance without abruptly cutting off the sounds of the previously selected Performance. Direct USB connection to PC, Mac & iPad In the studio, MONTAGE can connect to your Mac or Windows PC through a single USB cable.

Thanks to the class-compliant driver architecture no complex driver installation is needed. MONTAGE directly delivers audio channels for all 16 Parts to your DAW with 24- bit/44.1 kHz. If you choose the much higher sample rate of 192 kHz, there are still four stereo channels outputs from MONTAGE via USB. In addition, all MIDI data is transmitted via USB too. As an alternative to notebook and desktop computers, MONTAGE can also be used in conjunction with Apple iOS mobile devices such as Apple iPhone or Apple iPad.

3 of 3 Three MONTAGE models with 61, 76, or 88 keys Yamaha MONTAGE will be available in three variants. The central control and display unit on all models is the 7-inch touchscreen. Eight endless encoders with LED rings are on hand for direct operation, flanked by eight faders with stepladder LEDs. The new control element “Super Knob” has a separate area to the left of the touch display. MONTAGE 6 and MONTAGE 7 feature 61 or 76 keys on the basis of a semi-weighted FSX synth action keyboard with aftertouch. MONTAGE 8 features 88 weighted keys of a hammer-action keyboard with aftertouch. 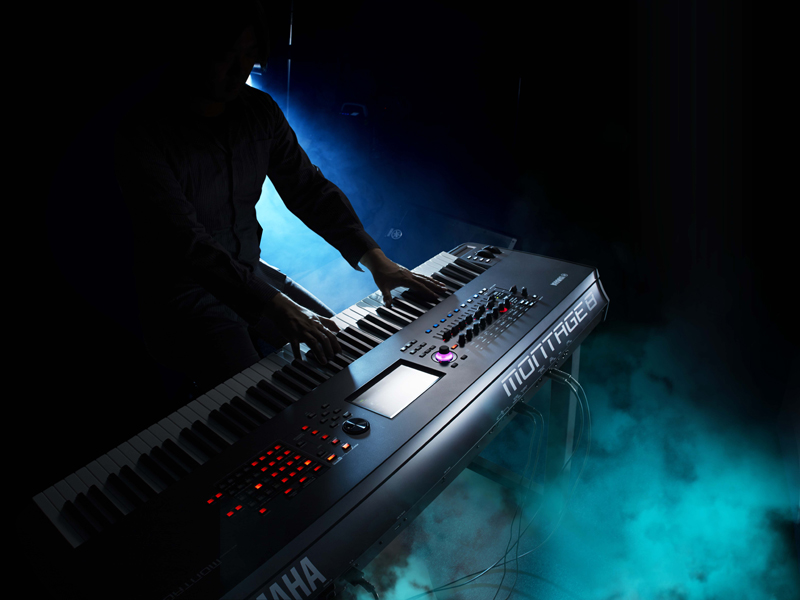 All MONTAGE models feature four balanced analog audio outputs (2 x stereo) and two analog audio inputs. Thus guitar, microphone, and other playback devices can be connected to the MONTAGE to refine those signals with the internal effects of the instrument. The analog audio outputs of all MONTAGE variants are built as balanced outputs featuring the “Pure Analog Circuit” conversion. This technology has been developed to convert the signal from the digital to the analog domain without losing its clarity and strength.

MONTAGE availability Yamaha MONTAGE makes its world premiere at the NAMM Show 2016 and becomes available in Europe from May 2016. The prices will be announced at a later date.

For more information, visit the Yamaha Booth at the 2016 NAMM Show in the Anaheim Marriott Hotel, Marquis Ballroom, January 21-24, 2016.