Yamaha have just revealed this incredible looking new mixing rack – utilising the same technology that can be found in their TF series mixing consoles. Read on for more info… Press Release Yamaha’s TF series of mixing consoles has brought the best digital mixing technology to the widest possible user base, its intuitive TouchFlow Operation […]

Yamaha have just revealed this incredible looking new mixing rack – utilising the same technology that can be found in their TF series mixing consoles. Read on for more info…

Yamaha’s TF series of mixing consoles has brought the best digital mixing technology to the widest possible user base, its intuitive TouchFlow Operation coupled with Yamaha’s renowned audio quality, flexibility and reliability. Now, with the launch of TF-RACK, the TF series mixing is even more flexible and convenient.

Ever since Yamaha launched its first digital mixer, the DMP7, in 1987, the company has strived to provide digital mixing technology for the widest range of applications.

Yamaha digital mixers are available for every application, from small events and venues to large-scale concerts and festivals, music production, commercial installations and more.

The TF series was a landmark product, ushering in a new era of intuitive operation and fast, flexible setup that is equally accessible to everyone from first-time users to seasoned audio engineers.

TF-RACK now adds further versatility and potential to the range.

Housed in a 3U high, 19” rack casing TF-RACK is a space-saving, all-in-one 16+1 stereo in, 16 out digital mixer featuring all the ease of setup and operation that has made the TF series so popular. 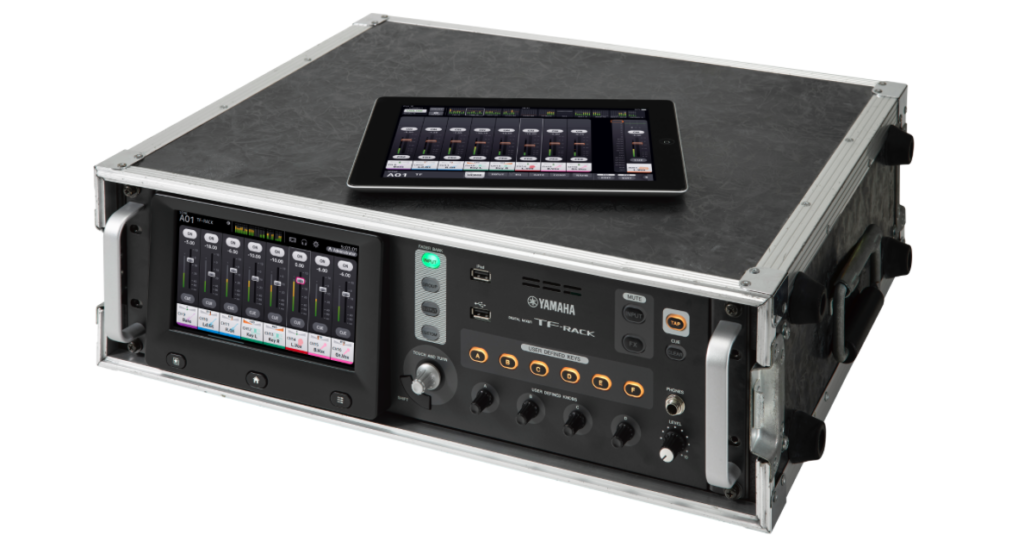 As with the TF series consoles, a hardware Touch & Turn control on the front panel allows for very precise parameter adjustment.

1-knob Comp, 1-knob EQ and more advanced facilities that are a feature of other Yamaha digital mixing products mean it is possible to achieve a polished sound with minimum effort in the shortest possible time.

QuickPro Presets for specific musical instruments and microphones have been designed by respected engineers and manufacturers to provide quick, easy access to effective settings, while set-ups for any situation can be instantly loaded via a simple scene recall.

A number of preset scenes are provided to give new users a head start, with dual scene memory banks making it easy to organise scenes by music or event type, for example.

The latest firmware for all TF series mixers will be released simultaneously with TF-RACK. As well as providing support for TF-RACK, firmware V3.0 also adds convenient features such as the ability to set up limited-access user accounts for each operator and additional QuickPro Presets™ developed in collaboration with Ultimate Ears.

Convenient Software Control
One of the major advantages of the rackmount TF-RACK is that it can be housed in spaces that might not be big enough for a full console, even one as compact as the TF1.

TF-RACK can be conveniently set up and operated in even the most difficult areas using wireless apps including TF Editor, TF StageMix and MonitorMix, featuring user interfaces that seamlessly extend the mixer’s own on any device.

Audio Quality and Processing
As with all Yamaha digital mixers, of course audio quality is at the heart of TF-RACK. Recallable Yamaha D-PRE™ microphone preamplifiers ensure that every nuance of the original sound is effectively captured.

An expansion slot for an optional NY64-D audio interface card is provided. This, along with a Tio1608-D I/O rack unit, are all that is needed for a basic Dante network with high audio quality and low latency.

With 40 input mixing channels, 20 Aux buses and eight DCA groups with Roll-Out, TF-RACK is a highly flexible mixing solution. Small enough to be deployed in the most constructed area, it has enough capacity to satisfy a very wide range of applications and locations.

Shipping from December 2016, TF-RACK will be on show at a number of European trade events in September, including IBC in Amsterdam (9th-13th), the PM I PRO Sound & Lighting Show in Birmingham (11th-13th) and PLASA, London (18th-20th).