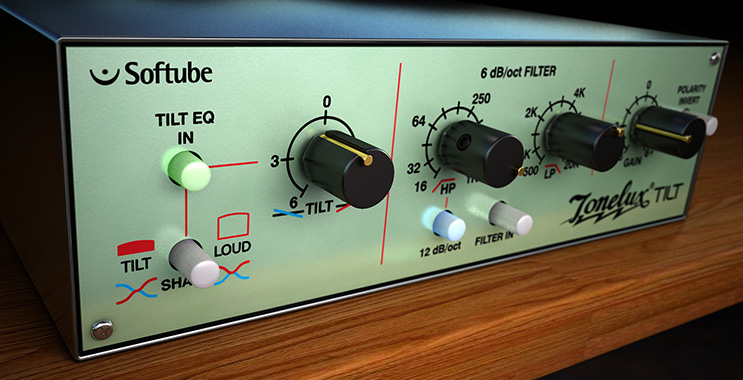 The Valley People Dyna-mite Plug-In is an exacting emulation of the classic limiter/expander/gate designed by the legendary Paul Buff, who founded the historic PAL studio in southern California.

The Dyna-mite has enjoyed a fanatical cult following for over three decades and is considered a “secret weapon” by top engineers and producers. Although it can be used as a traditional limiter or expander, the Dyna-mite is also a creative tool capable of extreme, yet musical effects on a variety of sound sources.

The Valley People Dyna-mite plug-in offers the exact features and sonics of the famed hardware unit and can transform instruments with dynamic gating textures. It can be used for nearly anything from gently limiting and de-essing vocals, to demolishing the transients of any sound.

Designed to speed up EQ workflow and enhance creativity, the Tonelux Tilt EQ Plug-In allows for quick, simple, and effective broad-stroke EQ moves. With the single Tilt control, engineers and producers can quickly mix as they go. Turn it to the right to cut lows and boost highs, turn it to the left to cut highs and boost lows. The Tonelux Tilt EQ Plug-In also models the transformer found in the Tonelux hardware, adding a subtle distortion for bass frequencies, fattening up the low end of a track.The included Tilt Live EQ plug-in skips the transformer modeling, freeing up even more instances for live mixing. It also replaces the Gain control with a Boost Ceiling control, which keeps the output gain of the plug-in from being boosted no matter how much EQ boost is applied.Key Features:Learn more about the Valley People Dyna-mite plug-in here:
uaudio.com/store/special-processing/valley-people-dyna-mite.htmlLearn more about the Tonelux Tilt EQ plug-in here:
uaudio.com/store/equalizers/tonelux-tilt-eq.htmlDownload UAD Software v7.8 software here:
uaudio.com/support/uad/78.htmlLearn more about award-winning Apollo Thunderbolt audio interfaces here:
uaudio.com/apolloLearn more about award-winning UAD Powered Plug-Ins platform here:
uaudio.com/uad-plug-ins.html