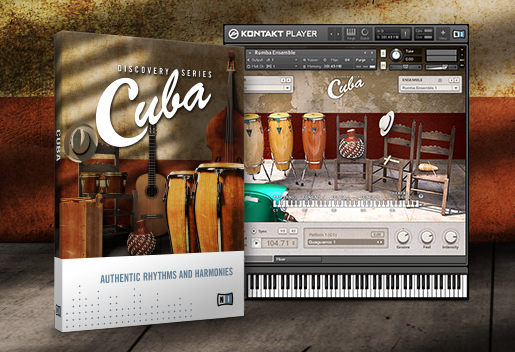 Native Instruments have released the newest addition to their Discovery series of virtual instruments. Cuba features a range of ensembles and classic instruments and joins the previously released West Africa and Balinese Gamelan packs of world-music flavoured releases.

Cuba also features a built in sequencer, reverb, tape saturation, compression and many more manipulable features. Cuba looks to be a worthy purchase for those wishing to add a little bit of exotic color to their tracks.

Native Instruments have introduced the latest installment of their DISCOVERY SERIES – the range of KONTAKT Instruments based around specific musically vibrant locations. DISCOVERY SERIES – CUBA celebrates the sounds of the master musicians of Havana – rich, varied, and joyful music that encompasses the melodic and rhythmic traits of son, rumba, salsa and merengue. KONTAKT users can now add the special flavor of Cuba to almost any production style – from house and techno to pop, indie, and world styles.

CUBA offers a library of rhythmic patterns and harmonic progressions – all easily tweakable to fit specific productions using the powerful, built-in sequencer. A more human feel can be applied via the Groove and Feel knobs. Users can also adjust microtiming at the instrument level for an added level of rhythmic nuance. The Intensity knob adjusts the overall velocity of the performance, and 6/8 or 4/4 timings can be selected depending on the production style.