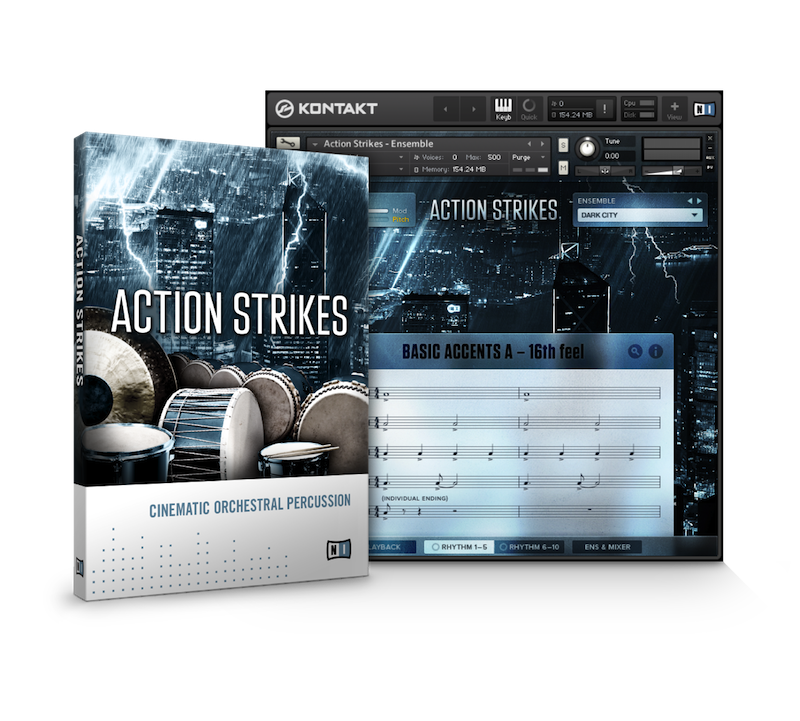 Action strikes enables the user to choose between a variety of rhythmic possiblities with real time control, featuring a unique interface designed specifically for creating orchestral pieces quickly and efficiently. High, mid and low sections from different ensembles can be mixed and matched with a total of over 1,700 timbral possibilities. Read on for the full press release… 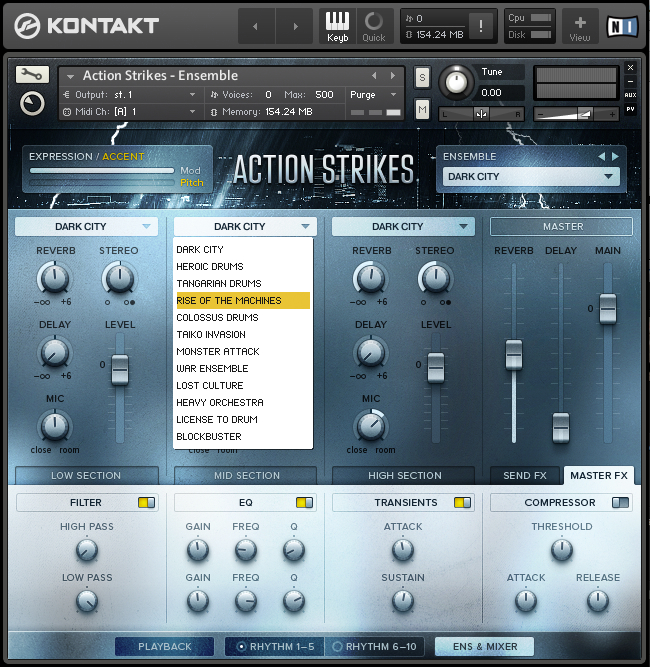 ACTION STRIKES was created with Dynamedion, the renowned score producers behind the acclaimed ACTION STRINGS instrument. ACTION STRIKES features an advanced, one-of-a-kind interface designed for creating orchestral pieces for film, television, and game scores with ease. 12 carefully-assembled ensembles feature signature sounds suited to a range of different film genres. High, mid, and low sections from different ensembles can be mixed and matched with a total of over 1,700 timbral possibilities. An assortment of 105 rhythms with five variations allow for vast rhythmic potential when developing original arrangements. Composers can augment the sound of the ensembles with 65 individual instruments – each with 32 playable rhythms – and 12 playable sets of single hits.

Focusing on ease of use and efficient, innovative workflow, ACTION STRIKES brings real-time control and creativity to cinematic scoring. Accents are controlled by the left hand while the right hand chooses variations. The mod wheel adjusts dynamics – from whisper quiet to the loudest fortissimo – while the pitch wheel controls accent strength. From simple, effective accompaniment to full-blown percussive attacks, ACTION STRIKES offers composers remarkable versatility anywhere the sound of a live, orchestral percussion ensemble is needed.

The Dynamedion team behind ACTION STRIKES has established themselves as leaders in soundtrack composition, orchestral production, and sound design on the international computer games market. The company has won numerous prizes and music awards over the last decade for high profile projects such as Ryse: Son of Rome, Rush, KINECT Star Wars, and Crysis 2 – as well as movie trailer scores for The Last King of Scotland, The Bourne Ultimatum and The Hobbit: The Desolation of Smaug .