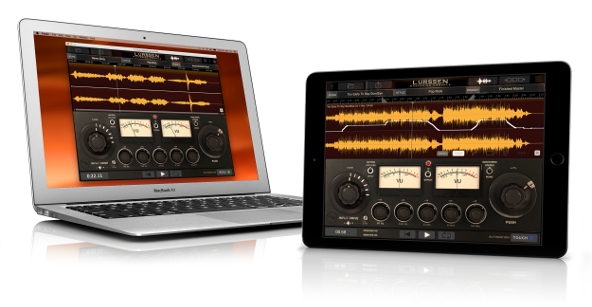 Lurssen Mastering Console lets musicians master their songs on their iPad, Mac or PC by tapping into the same Grammy Award winning “whole is greater than the sum of its parts” approach as the famed Lurssen Mastering studio in Los Angeles

IK Multimedia is proud to announce Lurssen Mastering Console, a totally new mastering tool developed in collaboration with multi-Grammy Award winning world-renowned mastering engineer Gavin Lurssen, Reuben Cohen and the team at Lurssen Mastering in Los Angeles, CA. Designed to be an effortless mastering tool for musicians and producers of all skill levels, it faithfully digitally recreates the unique “whole is greater than its parts” approach used in the studio.

It provides a top of the line mastering processor chain with parameters that can be recalled as 20 different “Styles” that have been created by Gavin, Reuben and the team to reflect the settings they’ve developed in their decades of combined experience mastering hip-hop, rock, pop, Americana, country and more. Now, with Lurssen Mastering Console, musicians can make great sounding masters both at home and on the go when a trip to Lurssen Mastering just isn’t in the budget.

A “whole is greater than the sum of its parts” philosophy
Lurssen Mastering Console represents a new approach to digital audio mastering. Streamlined and easy-to-use, it provides a complete emulation of the entire mastering processing chain developed by world-renowned mastering engineers Gavin Lurssen and Reuben Cohen, and their team. It gives users access to the their unique studio workflow, secret techniques, signal chains and technical knowhow, effectively condensing many decades’ worth of mastering experience into a single, easy to use solution.

Tap into professional mastering results
Lurssen Mastering Console comes with 20 unique mastering templates – called “Styles” – that have been carefully crafted and set up by Gavin Lurssen, Reuben Cohen and their team of engineers. These templates provide the real world expertise, perspective and secrets of mastering each musical genre. Not only do they feature high-quality digital mastering processors developed with IK Multimedia’s world-renowned expertise, but they also replicate the nuance and interaction between each processor in the chain, imparting a certain magic not present in other mastering tools. Each template’s processors have already been set up and configured by Lurssen Mastering for effortlessly professional mastering results.

Powerful processing and effortless export
As with mixing, mastering is about ensuring that audio sounds as good as possible on as many playback devices as possible. Lurssen Mastering Console allows for an extreme degree of sonic detail thanks to its 88.2/96kHz DSP processing. Finished audio rendered with Lurssen Mastering Console sounds great in any format. It allows for export in all popular file formats from AAC to WAV, FLAC and beyond. It also allows for quick export to File Sharing, SoundCloud and more.

With Lurssen Mastering Console, musicians finally have a way to achieve professional-quality audio mastering results any time and everywhere they go.

Pricing and availability
Lurssen Mastering Console is available now for iPad via the App Store as a free app with a functional demo mode. All content can be unlocked via a one-time in-app purchase of $/€99.99. A standalone and plug-in version for Mac and PC is now available for preorder from the IK online store and authorized resellers for a special pre-order price of just $/€199.99*. Lurssen Mastering Console for Mac/PC will be available in February, 2016 for $/€299.99*.