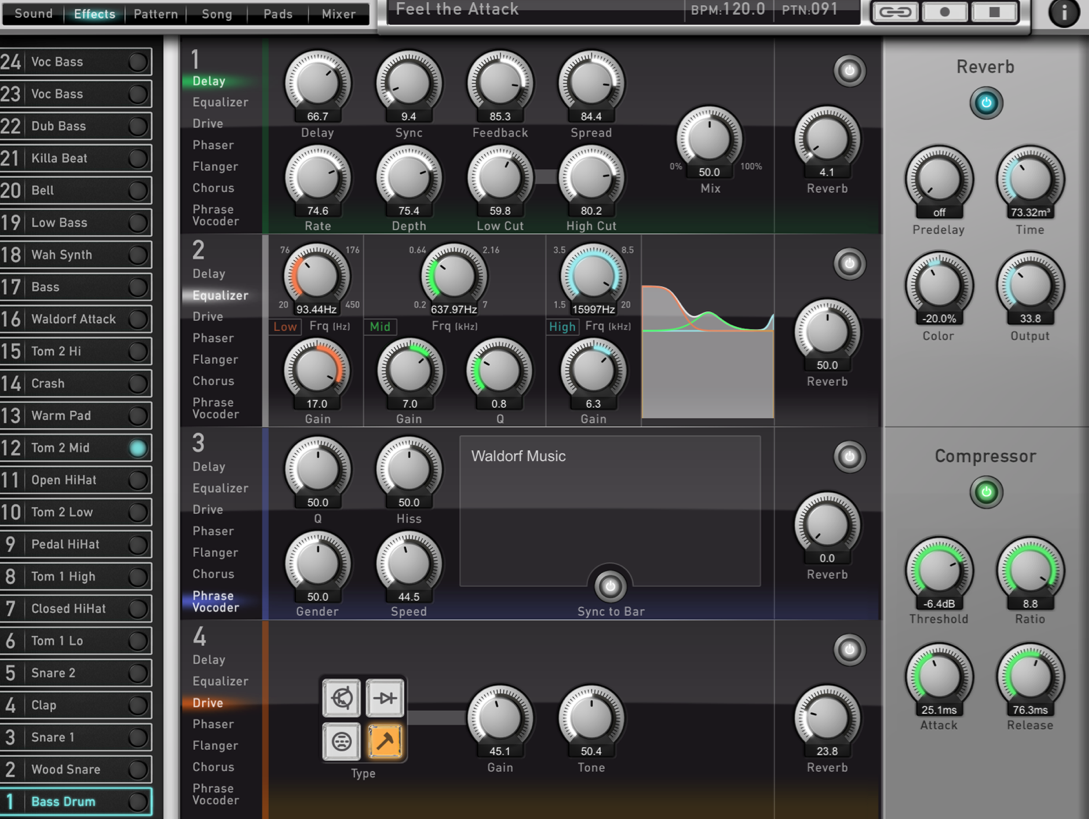 Waldorf are set to unveil new software for Mac, PC and iOS as well as it’s first Eurorack module at NAMM 2015…

REMAGEN, GERMANY: high-quality synthesizer developer Waldorf is proud to announce new software for Mac, PC, and iOS alongside its first Eurorack module at The NAMM Show 2015, January 22-25 in Anaheim, California…

Having seriously succeeded in changing perceptions of what a serious iOS instrument can be thanks to unique sounds simply unachievable with any other synthesizer, Waldorf has responded to requests to make its award-winning Nave advanced wavetable synthesizer available on other platforms by introducing Nave for VST/AU/RTAS.

Now this new Nave brings that notable Nave sound engine to your favourite DAW. Designers have optimised its great graphical user interface to work with the tried-and-tested computer combo of keyboard and mouse (or track pad) rather than touch screen surface technology, though nothing has been lost in translation. The featured-packed Nave comes pre-packed with superb sounds, ranging from spatial pads to vivid wavetable scans and cutting leads to solid basses, but, above and beyond that, also an abundance of incredibly imaginative sound worlds — many of them professionally produced by some of the top sound designers around.

As a synthesizer thoroughbred at heart, Nave really represents a phenomenal playground for sound creation creativity. Its oscillators offer expanded wavetable functionality with elaborate editing facilities and an extremely effective speech synthesizer. Anyone at all familiar with Waldorf software instruments will immediately feel right at home with the typical Waldorf workflow where sound shaping modules are always directly accessible and all arpeggiator, envelopes, effects (Phaser, Flanger, Chorus, Reverb, Equalizer, Compressor), and Modulation Matrix management controls are only one push of a virtual button away.

And besides its standard yet classy chromatic keyboard, Nave also includes innovative ‘blades’ and pads to control the sound in different ways. Why restrict yourself to iOS? The new Nave now lets you work wherever and however you want. Whether you’re Mac- or PC-based, desktop-bound or laptop-mobile, Nave gives your professional productions a truly cutting-edge sound.

Any sound source can be connected to the nw1 Wavetable Module via the In 1 CV (Control Voltage) input to transfer audio into a wavetable. And if that’s left you speechless then how about using its integrated speech synthesizer to translate typed text into wavetables (via a USB port with galvanic isolation)! Speaking of communicating with the outside world, two further CV inputs are also provided alongside a Gate input (for triggering wavetable travel and recording) and a main 1V/Oct CV input with Trim (for pitch control).

The 32HP-width nw1 Wavetable Module comes complete with a Eurorack power connector (+/- 12V, 150mA), so it’s ready for action. Simply slot the nw1 Wavetable Module into any available space in an appropriately-equipped Eurorack modular synth system to take it to a higher levels of synthesis than ever before. But be warned: you’ll want to shout from the rooftops!

Back in the wonderful world of iOS, Waldorf has masterfully migrated its long-running Attack virtual drum and percussion soft synth that took the VST world by storm back in early 2001 to iPad 3 (Retina), iPad mini (1 and 2), and iPad Air (1 and 2) as iOS Attack. Its impressive sound engine is cleverly complimented by an integrated 16-step sequencer that is as fun to use as it is useful. iOS Attack offers 24 instruments — each entirely programmable through a stunning, touch-optimised user interface.

Just like Nave, iOS Attack is a seriously in-depth musical instrument for iPads. It’s easy and fun for sure, but at its core it’s truly a sonic beast of an instrument, instrumental in inflicting out-and-out drum power — out of the tablet and into the walls!

Last but not least, tellingly, the classic Waldorf Edition has had a visual makeover, but its core values remain unchanged and unchallenged: the holy trinity of inspiring software instruments! PPG Wave 2.2V is a virtual reincarnation of its namesake cult classic, coming to prominence with the trailblazing PPG Wave series starting back in 1982. First resurrected in 1989 with the Waldorf Microwave, today it enjoys a new lease of life in virtual studios on Mac and PC computers.

Classic wavetable synthesis is known for conjuring up the feisty analogue and digital hybrid sounds that have graced so many hit records over so many decades. Attack is a percussion synthesizer powered by an almighty analogue synth sound generator.

It transports the trademark sounds of classic Eighties analogue drum machines and the progressive electronic club beats of the Nineties onwards and upwards into truly 21st Century production environments. As Attack computes all sounds in realtime, users can change any parameter directly.

Owners of Apple’s iPad 3 (Retina), iPad mini (Retina), and iPad Air (1 and 2) will be able to purchase and download iOS Attack online during the second quarter of 2015 from Apple’s App Store for €17.99 EUR (including tax).