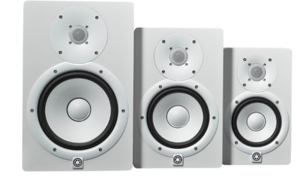 Read on for more details…

Following their introduction at Frankfurt Musikmesse 2013, the second generation of Yamaha’s HS Series of nearfield studio-quality powered monitors have proved extremely popular in professional and home studios the world over. Now the 3-strong full-range lineup – HS5, HS7 & HS8 – are all available in a stunning white finish!

The HS Series – completed with the HS8S 150w powered subwoofer – shares the same design philosophy as the legendary NS-10M Studio Monitors and the subsequent highly-acclaimed MSP range, and is specifically designed (and priced) for the project home studio market. However, as is to be expected from Yamaha – an acknowledged world leader in nearfield studio monitor design and innovation – the HS range can easily hold its own against far more expensive monitors.

To uphold their reputation for delivering exceptionally clear, natural and detailed sound, Yamaha engineers designed new transducers for the HS range and produced proprietary technology that reduces audible noise – often caused by air vibrations – by up to 6dB; yet another example of the brilliant blend of design, technology and materials that will satisfy even the most demanding of music producers. And now they get to choose between two splendid colours, too!

New models HS5W, HS7W and HS8W are available from March 2014 and will cost the same as current models.