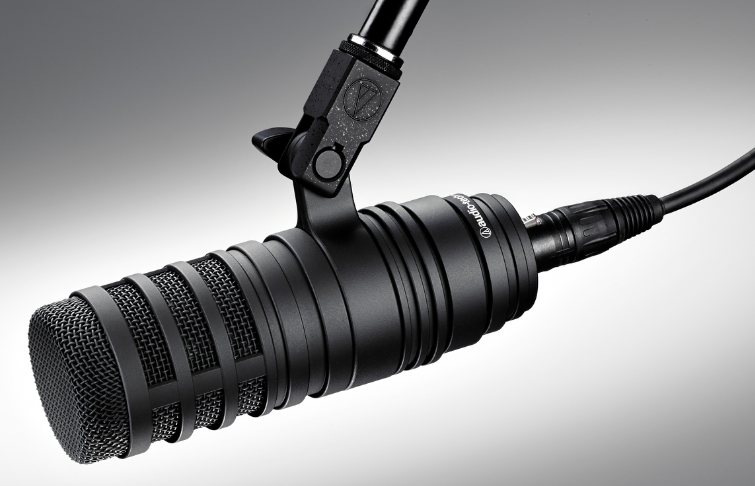 Audio Technica are set to unveil an exciting assortment of new gear at Musikmesse and Prolight + Sound 2015, including a new large diaphragm dynamic mic, new headphones and the System 10 PRO Wireless System. Read on for more info….

Audio-Technica is exhibiting in Hall 8, Stand B32 at Prolight+Sound. The company is hosting a ‘cocktail hour’ drinks reception for press and trade visitors at the stand between 5pm-6pm on Wednesday 15, Thursday 16 and Friday 17 April.

BP40
A dynamic vocal microphone with rich, natural condenser-like sound for a variety of applications – including radio, overdubs, post-production and more – the BP40’s hypercardioid polar pattern provides isolation of the desired sound source and maximum off-axis rejection when working in close production environments.

The AT2020USBi works with both USB and Lightning cables (included), so users can employ it straight from the box to digitally capture audio on the device of their choice: PC, Mac or iOS. The integrated gain control adds to the convenience, allowing users to adjust the input level directly on the microphone.

System 10 PRO
Ideal for fixed-installations, touring set-ups, House-of-Worship and education applications, the 2.4GHz System 10 PRO’s rackmountable wireless chassis can house one or two receiver units, operable either within the chassis or removed, mounted remotely and connected via Ethernet cable.

The ground-breaking design offers real flexibility in terms of installation and use, without the expense of adding an antenna distributor and corresponding cables. Receivers can be placed up to 300 feet away – even in separate rooms – and up to five chassis can be linked with an RJ12 cable (included with each system) to build a stable multichannel system.

Linking creates a system in which receiver units work together, with all receiving, transmitting and frequency allocation co-ordinated to prevent audio dropouts and enable simultaneous use of up to 10 channels.

In terms of tone the proprietary drivers in the R70x – combined with the headphones’ acoustically transparent housings – deliver beautifully natural, spacious open-back tone. The 45mm drivers, created specially for the R70x, represent the culmination of Audio-Technica’s more than 40 years of headphone design.

Audio-Technica’s much-loved M-Series professional monitor headphone range has long been relied on by producers, engineers, musicians and DJs in the most demanding recording and performance situations. And with the M70x, the range has a new high-performance range-topper.

Designed specifically to reveal the most detailed nuances in a mix, the M70x is tuned to reproduce extreme low and high frequency content with remarkable accuracy. Its impressive 5-40 000Hz frequency response is perfectly balanced – thanks to proprietary 45mm large-aperture drivers with rare earth magnets – and even at high volumes the M70x’s 2000mW maximum power input means very low distortion for superb clarity and definition.

The first wired microphone that transmits audio and control data together over Audinate’s Dante network protocol, Audio-Technica’s  ATND971 boundary microphone is a perfect fit for boardrooms and other meeting spaces. Bridging the gap between audio and IT, the mic’s simple Ethernet connection allows it to communicate across an existing network of Dante-enabled devices and – with the microphone’s programmable user switch – control such things as video camera movement, room lighting presets etc at the push of a button.

Removing the need for a separate, standalone Dante audio interface – while adding useful ‘on-stand’ switch and indicator functionality – the ATND8677 connects directly to the audio network via standard RJ-45 connector and structured cabling, allowing for flexibility in installation and quick re-locations.

The stand also offers the added benefits of GPIO-over-Dante enabled control, a new network feature developed specifically with Audio-Technica, for simple, flexible operation without the need for analogue audio and control cabling.

As such, the ATND8677 will also work natively with both Symetrix and Biamp control software (both manufacturers supporting the new Dante GPIO feature) to allow for highly integrated operation with Symetrix Edge, Radius 12×8 and Radius AEC plus Biamp’s Tesira DSP networking solutions.