The news of NI’s latest MASCHINE hardware and software is causing quite a buzz on the internet. Liam O’Mullane is the first to get hands-on… Liam got to play with the black MASCHINE STUDIO but white will also be available if you prefer.   We often get sent out of the office to attend product previews […] 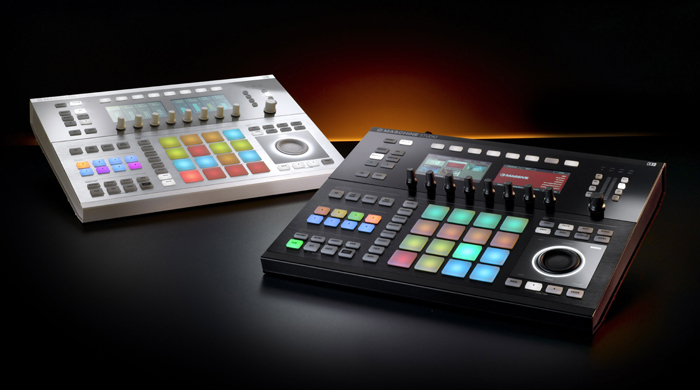 The news of NI’s latest MASCHINE hardware and software is causing quite a buzz on the internet. Liam O’Mullane is the first to get hands-on…

Liam got to play with the black MASCHINE STUDIO but white will also be available if you prefer.

We often get sent out of the office to attend product previews but not many of them are shrouded in such strict secrecy as Native Instruments’ latest launch. I was lucky enough to get my hands on the company’s pre-production MASCHINE STUDIO this month, and it’s taken all of my willpower to bite my lip until now – and I’m happy to finally be able to share my experiences.

Native Instruments took over the control room of Red Bull Studios in London for the preview. MASCHINE STUDIO was sitting proudly on top of the studio’s iconic SSL desk when I arrived. It was immediately obvious that this was a larger unit, having a similar-size footprint to the other serious MPC-style tools already out there.

Though it was the physical proportions that grabbed my attention first, I was quickly drawn to the two vivid-looking TFT screens on the unit. These are 480 x 272 pixels each and I was told that they are unique when compared to those of other groove-based products on the market. They really do look absolutely stunning and are a huge upgrade from the usual dot-matrix displays used for the existing smaller MASCHINE models.

The unit certainly feels well built and one of the first things you’ll notice on picking it up is the built-in stand. This may seem trivial, but when you’re normally left with the choice of either buying an add-on stand or using large quantities of Blu-Tack to raise units to a user-friendly angle, a built-in stand means a lot. 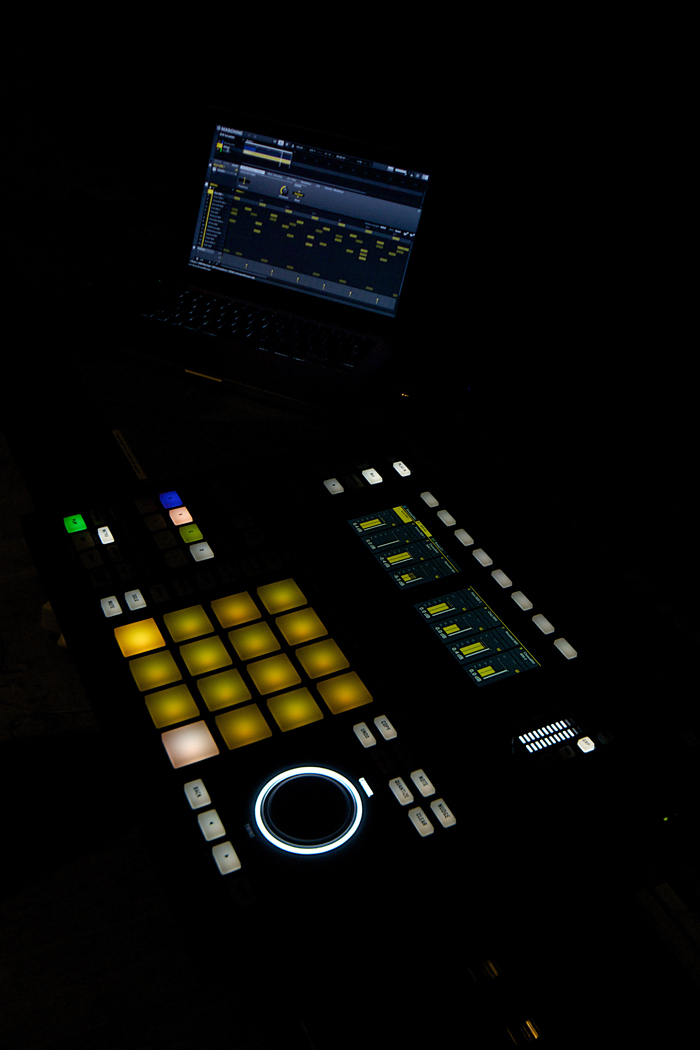 MASCHINE PRO passed the low lighting glow test with many flying colours. Always useful when you want to set a mood for getting creative in.

New software for all

The new MASCHINE 2.0 software will be available to all MASCHINE users, including those who own the first generation of the product (check NI’s website for further upgrade details). The first thing NI told me was that this software uses a completely re-built audio engine, and they also clarified that this will be backwards-compatible as well. This rewrite addresses certain limitations from the past: you now have the ability to create unlimited groups, there’s a new mixer view, and sidechaining is also now possible. Plug-in counts from a single sound to group level are also now unlimited, so it’s just your computing power that may be the limiting factor in your work from now on.

The effects that are supplied with MASCHINE 2.0 haven’t changed a great deal aside from a new plate reverb and the addition of a feedback mode for compression work, but both of these new features should help you further towards achieving classic mix sounds. I had a play with the effects in the latest software update and really liked the new plug-in strip, which offers a graphical representation of the plug-in in focus. This also applies to the wealth of other NI instruments and effects you may have in your library.

In general the screens are used for an overview on the left and more detail on the right. This allows for a very fine level of visual editing which I found useful for sample editing.

Although the new hardware is certainly very impressive, for me the most exciting news was something that applies to any MASCHINE owner: the new drum synth modules that come with 2.0! 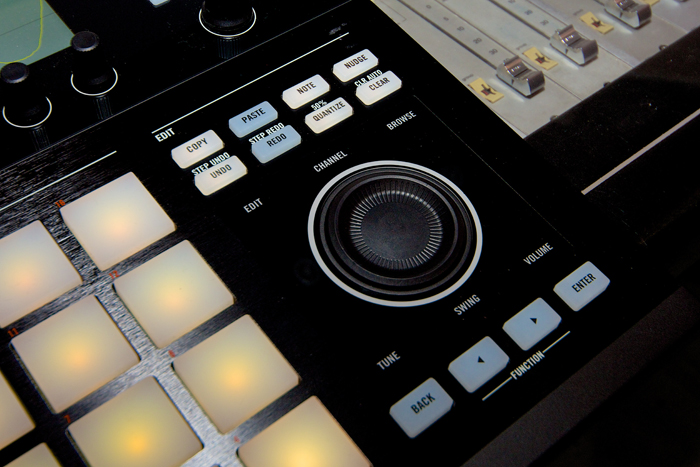 The jog dial had a very classic smooth, liquid feel to it like some of the classic sampler hardware. It was also nice and large for easier micro movements.

These became my focus for the rest of the session and they are certainly something to get excited about. With no plans from NI to release these as a separate plug-in option for other DAWs, these new sound sources could potentially define the sonic identity of the MASCHINE family for the future.

The synth plug-ins focus on both the electronic and acoustic worlds of drums, so the general vibes of 808s, 606s, 909s and so on are available through synth-based algorithms, but the acoustic drum sounds employ some very sophisticated modelling.

As I explored the sounds I soon discovered that you always start your sound design from a generically named drum sound. It’s then that you use a choice selection of parameters to tweak as a complex process goes on behind the scenes. I tested the ‘sub’ mode for kicks and requested for the full-range Dynaudio monitors at Red Bull Studios to be kicked into action so we could feel the bass. The bottom end on these modelled kick sounds is incredible – in fact, I think it helped to iron some of the creases in my trousers that day! I was told that they’ve kept the user parameters minimal while making sure that they have zero dead spots. This is achieved through algorithm switching when needed, which happens automatically.

A big physical upgrade with MASCHINE STUDIO is it’s three MIDI outputs which allow it to be a studio hub for external MIDI gear. A footswitch can also be used for hands-free punching in and out of patterns.

I tested this immediately, listening for a loss in impact energy, transient integrity and general tonal quality when pushed to the extremes of each setting. I can confirm that this isn’t merely PR spin as the sounds continued to be usable in any combination of settings. The FM bell-like tones were a great way to test this as you can often start to hear aliasing problems in the top end with some synths, but they were sweet and rich throughout, even when set to the ear-shredding higher tunings. MASCHINE 2.0’s modelling also responded to velocity changes, so I had lots fun playing with it while coming up with some very expressive patterns. 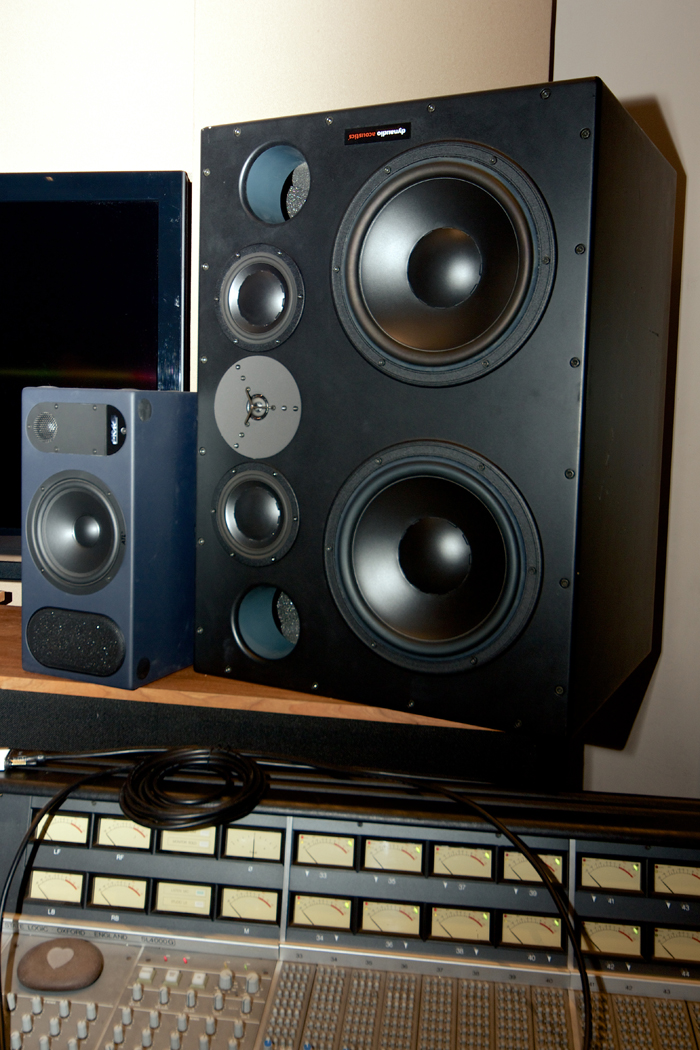 It takes a full-range set of speakers to truly appreciate how good the acoustically modelled and synthesis based drum plug-ins sound.

Although I’ve reported mostly about the sonic aspects of the MASCHINE 2.0 software here (which I think is paramount), I do need to state that with MASCHINE STUDIO this was all done without the need to look at a computer screen. This is something I often lecture people about as it helps to heighten your listening senses for better judgement. Look out for the full MusicTech review soon.

Price MASCHINE STUDIO €999  MASCHINE 2.0 €99 to existing MASCHINE hardware owners (free to anyone who purchased their gear after 1 October) Web www.native-instruments.com

MASCHINE STUDIO will be available worldwide on 1 November along with the MASCHINE 2.0 software