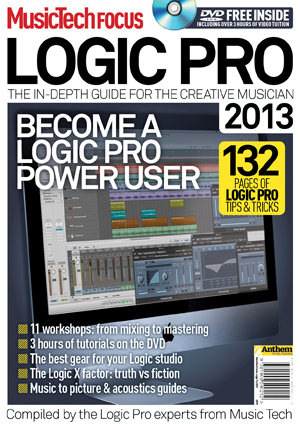 Pick up the brand new MusicTech Logic Focus 2013. Logic has traditionally been the weapon of choice for many a music producer and this Focus is designed to cover all aspects of the software – and, indeed, many other aspects of music production: from the science behind sound itself to how to protect your ears when making music! But the prime focus is, of course, on the software itself.

We take a look at how the software arrived in its current incarnation where Logic expert Alex Holmes explores its past, present and future. He continues in fine form with a look at mastering with software – with particular Logic focus. Mark Cousins then takes the tutorial baton as he’s been busy delving into the layers of Logic to help you turn into a power-user.

He covers everything – from programming drums to creative filtering, from working within the Environment to mastering – over a further 33 pages of workshops. Throw in features on DIY studio acoustics and composing music for picture and we think we’ve covered all of your Logical needs!

11 hours of workshops: from mixing to mastering

3 hours of tutorials on the DVD

The best gear for your Logic studio

Now available to BUY NOW ONLINE for immediate dispatch to anywhere in the world. Or get the digital edition or desktop/Android version here.

Also for sale at WH Smiths