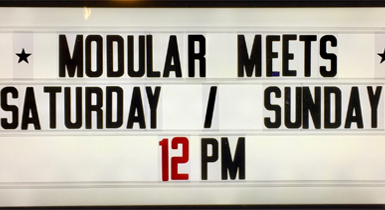 The Leeds Modular Meet has fast become one of the major Modular Events of the year. Dave Gale headed North on the third Saturday in August to see what was new in Modular.

Organised by Ben Wilson aka Divkid, the Leeds Modular Meet has an established reputation for new product announcements, and this year was no disappointment.

Leading the charge was Future Sound Systems, with a major new announcement in the shape of a collaboration between Roy Gwinn and Chris Carter (of Throbbing Gristle fame), as well as FSS founder and creative force, Finlay Shakespeare. After nearly two years of development, this was the first public outing for a Eurorack version of the legendary ‘Gristleizer’, which for the uninitiated was a home-made FX Pedal, originally developed by Carter and Gwinn, back in the mid-seventies, which strangely started life as a pedal design from ‘Practical Electronics’ Magazine, but went on to very much become part of the Throbbing Gristle sound, through various enhancements and mutations.

Now in Eurorack form, the Gristleizer comprises four different modules, namely VCF, VCA, Tone Generator and Pre-Amp, the latter allowing for guitar and microphone based signals to be inputted into the Eurorack realm. As you would expect, it sounds gritty and industrial, and is likely to be very popular, once they go in sale in the last quarter of 2017, with preorders already being accepted.

As if we needed more proof, Chris Carter gave a live modular performance, utilising the multifaceted Gristlizer modules, beginning with some growling timbres and escalating through the addition of low-bit-rate drums, with the unmistakable presence of the original Throbbing Gristle timbre.

Scottish based company Instruo also had a product announcement, alongside their superb three voice oscillator, Troika, in the shape of ‘Scion’. Possibly the most beautiful module I have seen of late, the leafy shadow of the module throws out Random CVs, which can be generated and drawn from organic sources.

As if to demonstrate this, a lovely pot-plant was attached to the module using ‘Tens Pads’, which in turn completed a circuit and induced random voltages. Particularly impressive is the display, which glows beautifully in colour to demonstrate the presence of a generated signal.

Over from Sweden, Dan Wahlbeck from DPW Design was demonstrating his new Wave Folder module, which alongside some formidable folding circuitry, includes an all analog distortion. The folding capabilities are very sharp indeed, as could be heard sonically and seen visually, when presented on an oscilloscope. The distortion circuit also sounded crisp, working very much with the folding architecture.

Alongside the companies with new announcements, there was plenty of live modular music to be heard too, with an opening set from Rob Hordijk, who was playing his own 5U based modular system, with lots of modulated tone sources, and quite electronically ambient in style. VCOADSR treated us to some great techno, with his trademark industrial bias, and an accent on polyrhythmic triggering and depth, in sound, mix and structure.

Over the course of twenty or so minutes, we were taken on a bit of a journey, starting with developing chordal material, which slowly moved into harsher areas of metallic percussion. Closing proceedings was Robin Rimbaud aka Scanner, who started us off with a simple vocal sample repeating ‘Listen to me’, before moving into beautifully textured arpeggio based tones, very reminiscent of Terry Riley.

This superb, largely improvised set, brought the first day to a suitable end, with further treats ahead on the second day, in the shape of workshops and demonstrations, drawing the whole weekend to a close.