IK Multimedia have released a new version of their increasingly popular AmpliTube app for iPhone, iPad and iPod touch. Aimed primarily at guitar and bass players – the app is now packed with new features and effects and now supports iOS 8. Read on for more info. Press Release: October 16, 2014 – IK Multimedia, […] 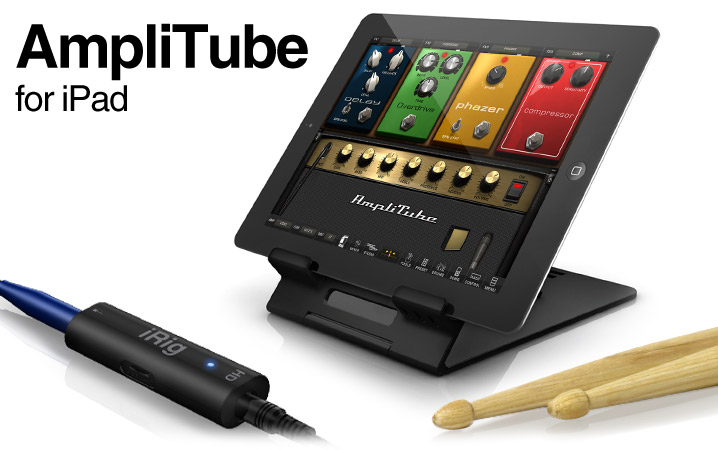 IK Multimedia have released a new version of their increasingly popular AmpliTube app for iPhone, iPad and iPod touch. Aimed primarily at guitar and bass players – the app is now packed with new features and effects and now supports iOS 8. Read on for more info.

The earth shaking gain of ENGL
AmpliTube’s amplifier section is about to get a whole lot louder. The latest version introduces two new offerings from ENGL, an innovative German manufacturer whose high-gain amps are tailored to provide that supremely righteous tonality coveted by metal, classic rock and modern hard rock players. The amp heads in AmpliTube are based on the meticulously engineered virtual models found in AmpliTube 3 for Mac and PC.

The ENGL E650: An all-tube head that can conjure up classic rock-god tones from the ’80s and ’90s as well as the heavy crunch and distortion of tomorrow’s tone connoisseurs.

The ENGL Powerball: An amp head that’s earned its reputation as one of the most powerful and versatile modern high-gain amplifiers off the potent combination of its brutal rhythm tones, super high-gain lead tones and ultra-clean tones.

Both amp heads are available as in-app purchases, which means AmpliTube’s collection of amps is bigger than ever before. And to coincide with this, AmpliTube now lets users transfer their purchased gear between versions and devices, such as from AmpliTube for iPad to AmpliTube for iPhone/iPod touch (limited to 10 device transfers per user).

Take control with iRig BlueBoard
Though AmpliTube is fully controllable from the touchscreen, it really comes alive when paired with IK’s iRig® BlueBoard Bluetooth pedal controller. iRig BlueBoard gives users a wireless stompbox-like experience with four assignable buttons that can be used to trigger effects and swap presets from the floor. The latest version of AmpliTube makes the pairing even more seamless and powerful by adding built-in support and a new mode that allows for global control of AmpliTube’s robust built-in recorder.

8 tracks of tone
AmpliTube has always let players record their sessions via its built-in recorder. The latest version expands this capability by giving iPhone and iPod touch users the ability to expand from a single-track to an 8-track recorder through in-app purchase. That means that iPhone, iPad and iPod touch users have the same multitrack recording functionality, which is perfect for AmpliTube’s new project sharing feature. Now users can share their recordings and music projects across different versions and across different devices via iTunes File Sharing.

Powerful Drums
For practising and recording, AmpliTube features a powerful drum module called Loop Drummer. Like a virtual session musician, it provides rock-solid rhythm tracks that sync with AmpliTube’s recorder. The latest version of AmpliTube builds on this by adding additional Style Packs for purchase from the in-app store. Style Packs include 64 loops each, and provide eight different song-construction kits based around a core drumbeat style. The new Style Packs include 5 alternate versions of existing AmpliTube favourites – BLUES 2, FUNKY 2, METAL 2, POP 2 and ROCK 2 – plus three exciting new styles – JAZZ, LATIN and REGGAE. Now, no matter their style, guitar players and bassists will be able to practise with a drummer anywhere.

And a Whole Lot More
AmpliTube has also been optimised in a number of more subtle ways: It’s fully compatible with iOS 8, the new operating system for iPhone, iPad and iPod touch.

Its MIDI control has been improved by adding more assignable parameters to the built-in recorder. It’s now compatible with Audiobus on iOS 8. Its latency and MIDI control have both been improved. And its quick start guide has been replaced by multi-language dynamic tooltips available in English, French, Italian, Spanish, Portuguese and Japanese.