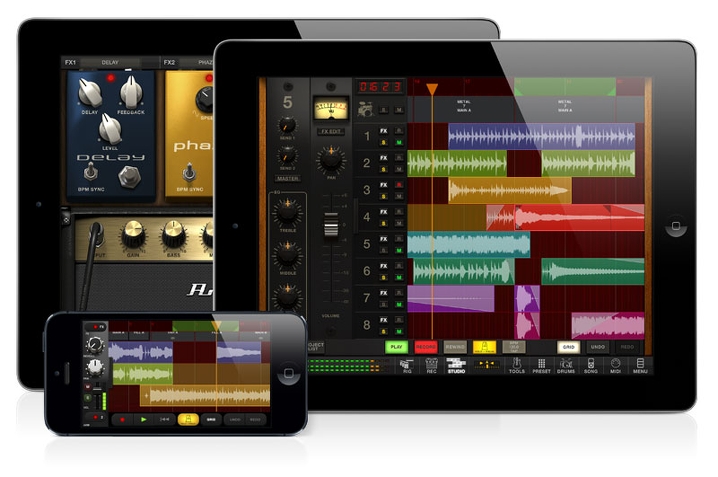 The new release of AmpliTube completely changes the game for mobile music production and offers everything musicians need to quickly and easily record complete songs: a full guitar/bass rig; a multi-track recorder with effects; a new timeline audio editing suite for arranging, editing, mixing and mastering; a built-in programmable drummer; professional export features for sharing creations with the world; and the possibility to work simultaneously with other audio apps.

When used with the IK Multimedia iRig® line of guitar interfaces (like the new high-quality iRig HD, iRig STOMP or the iRig adapter), microphone products (like iRig MIC or iRig PRE) AmpliTube 3.0 provides an all-in-one solution with unmatched sound quality, guitar tone, recording flexibility and ease of use for the professional mobile musician.

The New AmpliTube Studio – Timeline Audio Editing Suite
The newest feature in AmpliTube 3.0 is the Studio, where users will see their audio tracks on a timeline with a waveform display, much like they are used to on their DAW (digital audio workstation) software on their computer. Audio regions can be manipulated with a full set of commands and controls: cut, copy, paste, delete, normalize, split (at playhead), create fades and crop clips.

Clips can easily be moved and adjusted with a simple gesture for precise alignment with other clips, and a grid feature provides “snapping” of regions to the timeline for easy positioning. Recording into a track is as simple as touching it, arming it and hitting record. AmpliTube Studio makes recording, arranging, editing and perfecting a complete song from start to finish a breeze, and once again revolutionizes the way musicians create on the go.

The new Studio is an extension of the AmpliTube recorder,which starts as a single-track recorder, and can be expanded to 4-track (iPhone/iPod touch) or 8-track (iPad) putting a full multi-track recorder with mastering effects the fingertips of the user. The multi-track recorder has features rivalling even the most sophisticated studio setups, like effects send and master multi-effects, which can add that professional feel to any recording. The recorder with the new Studio section is designed to allow players to quickly and easily get their musical ideas recorded, polished and ready for prime time.

A Complete Guitar Rig with New Gear
At its core, AmpliTube continues to be all about outstanding guitar and bass tone, and offers a full guitar/bass rig including tuner; selectable stomp box effects; amplifiers from the world’s top amp manufacturers like Fender®, Ampeg®, and Soldano®; collections from artists like Jimi Hendrix™, Slash and others; plus selectable speaker cabinets and microphones.

Exclusively for iRig HD users, AmpliTube 3.0 now also offers four new free gear models that address the tone needs of the most demanding metal and rock players – the Metal 150 and Metal W amps, and the X-Flanger and Wharmonator “Whammy” pedals. Never before has such a massive and comprehensive collection of tone machines been offered to mobile guitarists, right at their fingertips.

A Drummer Always in the Pocket
With AmpliTube’s built-in Loop Drummer, players will always have a professional drummer with them. Loop Drummer features complete groove “building blocks,” including intros, fills, main and alternate rhythms, and outros. It’s extremely flexible and easy to use, and covers virtually every style of music. Start with the free Rock style installed, and add more genre packs via in-app purchase, covering most musical styles, including Metal, Funky, Blues, and many others.

The Perfect Rehearsal Tool
AmpliTube also features a robust Song section that allows you to load pre-recorded material into it, change the tempo if desired, and practise along. This is a great tool for learning new material, or simply creating new riffs over existing material by using the “No Voice” centre-cancel button that mutes audio panned to the centre of the stereo field.

Supports Other Favorite Mobile Music Apps
AmpliTube is also Audiobus compatible, which means that it can be used simultaneously with up to 4 other compatible audio apps. Players can use other IK apps like SampleTank®, iLectric™ Piano or iGrand™ Piano; record material directly into the AmpliTube recorder or studio section; or use the AmpliTube signal chain as a tone generator, effects processor or recorder for other apps like GarageBand.

Price and Availability
AmpliTube 3.0 is a free update for all previous users and it’s available now on the App StoreSM both as a free or paid app for iPhone/iPod touch or iPad for only $19.99/€17.99 for new users. The new Studio feature is available as in-app purchase for $9.99/€8.99 on iPhone and iPod touch and $14.99/€13.99 on iPad for users who have already purchased the multi-track recorder, or at a special bundle price that also includes  the multi-track recorder for new users.

The four new gear models are exclusively available to iRig HD interface users, by simply connecting the interface to the app.