IK Multimedia have released a version of GrooveMaker 2 – their premiere remixing app, for Android devices. Read on for more information…   Press Release January 19, 2015 – IK Multimedia, the leader in mobile music creation technology, is pleased to announce that GrooveMaker® 2, its revolutionary remixing app, is now available for Android devices. […] 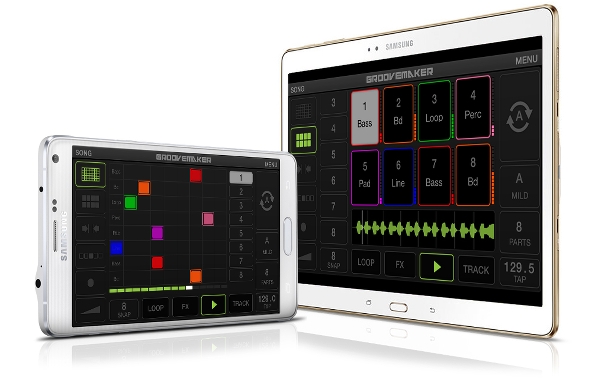 IK Multimedia have released a version of GrooveMaker 2 – their premiere remixing app, for Android devices. Read on for more information…

Press Release
January 19, 2015 – IK Multimedia, the leader in mobile music creation technology, is pleased to announce that GrooveMaker® 2, its revolutionary remixing app, is now available for Android devices. With a full spread of features and an intuitive interface, GrooveMaker 2 lets Android smartphone and tablet users make non-stop electronic dance mixes in real-time and sound like a professional DJ.

Remixing reinvented on Android
IK Multimedia’s history as pioneers of the computer music industry dates back for 19 years when it released its first music software, GrooveMaker. History was made again when GrooveMaker made its debut on the App StoreSM as one of the first real-time audio apps for iPhone and iPad. Now with nearly 3 million downloads on iOS, GrooveMaker will help music fans make music with their Android devices anywhere in the world, regardless of skill level.

Now available for smartphones and tablets running Android 4.1 and above, GrooveMaker 2 lets users manipulate pre-arranged sets of loops in real time – just like a DJ or live electronic music performer – thanks to its patented “groove generator” technology. These loops have been created to always sound good together, and they encompass virtually every style and sound imaginable.

A sound for every dance floor
GrooveMaker 2 gives users packs of loops organized as song packs. These song packs comprise a huge amount of musical styles: House, Dubstep, Hip-Hop, Techno, Trance, Electro, Drum and Bass, Reggae, Reggaeton, Rock and more – there are even signature song packs from artists like Ace from Skunk Anansie, Chris Domingo and Cool & Dre. Each song contains over 60 loops that cover essential categories like kick drums, basslines, pads, effects, percussion and more. GrooveMaker 2 also lets users import their own sounds and loops directly from their music library; its editing and auto-sync features allow for endless and effortless creative exploration.

Professional DJ results made easy
With GrooveMaker 2, getting great sounding results is easy as touching a button. Users can draw in grooves on its grid interface or use its Randomix feature to have the app automatically mix and match on its own. GrooveMaker 2’s intuitive controls make it easy to lock, solo and mute loops, change volume and panning and save favourite sequences for future use.

Its groove length control and advanced time-stretch features allow for even further creative applications, allows GrooveMaker 2 to sync up with and be used as a performance tool in even the most sophisticated of DJ setups. When used with IK Multimedia’s mobile mixer, iRig MIX, GrooveMaker 2’s X-Sync feature detects the BPM from an external audio source and automatically syncs to the groove.

Killer special FX
In addition to its streamlined sequencing, GrooveMaker 2 also sports a suite of powerful effects that can be used for live performance. These include classics like Filter, Delay, Stutter, Flanger, Crush and Noise as well as more creative effects like Twist, Brake, Spin and Tail.

Pricing and availability
GrooveMaker 2 is available now for Android on the Google Play Store for $9.99/€8.99. A free version is also available.