IK Multimedia have announced a new innovative new mobile music making controller – the iRing. The iRing is capable of allowing musicians to operate their mobile music apps via gesture control The wearable ring is lightweight and worn between two fingers, it is designed to do away with the need to touch the screen and […] 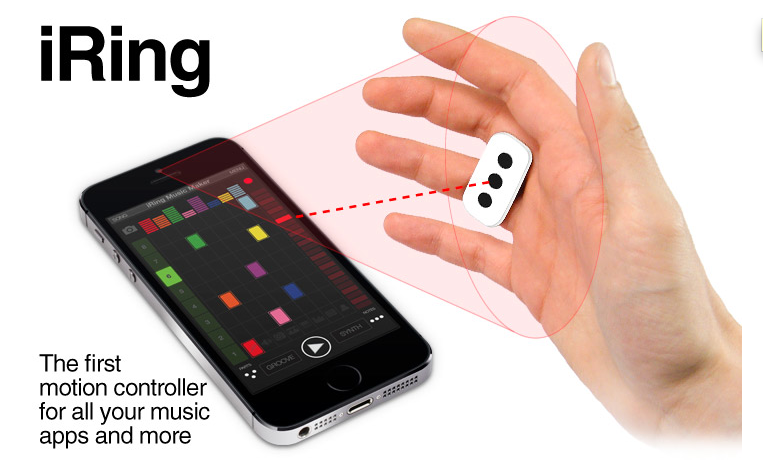 IK Multimedia have announced a new innovative new mobile music making controller – the iRing. The iRing is capable of allowing musicians to operate their mobile music apps via gesture control

The wearable ring is lightweight and worn between two fingers, it is designed to do away with the need to touch the screen and manipulate parameters and sound effects on the fly. iRing will cost $24.99/€19.99 (exc. taxes), and will be available in Q1 2014 in three colors (white, green and silver) at music and electronics retailers worldwide. Read on for the full press release.

January 7, 2014 – IK Multimedia, a global technology company and leader in mobile music-creation apps and accessories for iPhone, iPad and iPod touch, today announced a new technological breakthrough in mobile music making and app control: iRing™, the first motion-tracking controller for iOS music apps and more. Now musicians and others can control sound effects and other parameters of their favorite apps, in real time, using hand position, freeing them from needing to touch the screen.

iRing utilizes a wearable ring with identifiable markers, the mobile device’s front-facing camera, and advanced computer vision with highly-optimized recognition algorithms built into an app, to determine the precise positioning of the ring markers, tracking their movements and position on the 3-dimensional space in front of the device. This system provides a low-cost solution and a motion-tracking device that is accurate and affordable to anyone.

The iRing controller is a lightweight, double-sided ring that the user wears between two fingers, comfortable enough to be worn while operating musical instruments or other traditional music controllers. Each ring features a linear dot pattern on one side and a triangular pattern on the other. The device camera picks up the positioning of the ring patterns and the apps convert that information into music commands for dedicated app or MIDI information, which any compatible music app can read. This means that a user can now operate up to six controllable music parameters in their preferred music apps with one or two hands gestures.

While there have been previous attempts to use a device camera to track hand positioning, they proved not to be reliable for real-world usage, due to the many variables involved in computer vision recognition and the available processing power of mobile devices. iRing solves these issues providing an accurate method for precision detection of hand position in a wide range of lighting conditions.

The iRing Music Maker app gives music lovers a new and incredibly fun way to create music and grooves using hand gestures, with no music knowledge required, whatsoever. Users simply launch the app and use the iRing controller to change the beats, control rhythmic elements, synth parts and effects, for hours and hours of quality entertainment. Creating music has never been so much fun!

The included iRing FX/Controller app targets skilled musicians and DJs, and converts the distance information from the rings into precise MIDI control information that can be configured by the user. This MIDI data can then be used by any compatible Core MIDI app running on the device, or even sent to a computer via Wi-Fi. Users can configure the app to control effects, filters, notes, patches and more.

The iRing FX/Controller app also doubles as a controllable audio effects processor with 16 powerful and creative effects including Delay, Stutter, Phazer, Flanger, Compression, Fuzzy, Reverb, AutoWah, Crush, Twist Up & Down, Brake, Spin and Tail. These effects can be creatively controlled by the iRing, and inserted into the device audio path for use with any music app that is Audiobus or Inter-App Audio compatible.

iRing technology will also be incorporated into core IK Multimedia apps such as GrooveMaker®, DJ Rig™, AmpliTube®, SampleTank®, VocaLive™ and more, so DJs, guitarists, vocalists, bass players, producers, keyboardists and engineers will have a new level of control to deliver powerful and unique performances.

For third-party developers that want to incorporate and implement iRing technology directly into their apps, IK is offering a free development kit and licensing program, which make it easy to take advantage of this new breakthrough technology. iRing can also be easily utilized beyond music for a wide variety of applications including gaming, health & fitness, utility and more. Developers can take advantage of the technology and improve the functionality of their apps by contacting IK via the link provided on the iRing product page.

iRing will cost $24.99/€19.99 (exc. taxes), and will be available in Q1 2014 in three colors (white, green and silver) at music and electronics retailers worldwide. Pre-orders are now available on the IK Multimedia online store and selected stores. iRing FX/Controller and iRing Music Maker apps will be available as free downloads from the App StoreSM.

For more information about iRing™ for iPhone, iPad and iPod touch, please visit: