And, as we thought, it’s the classic SH2 synthesiser… Hot on the heels of the Aira System-1 launch – the hardware/software solution which enables you to run classic Roland synths in your DAW and then download or ‘plug out’ some of the sounds into System-1 hardware to play live – Roland has announced the next […] 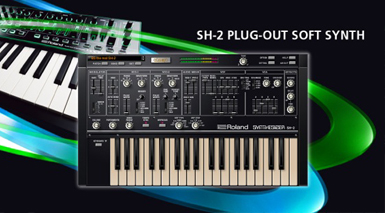 And, as we thought, it’s the classic SH2 synthesiser…

Hot on the heels of the Aira System-1 launch – the hardware/software solution which enables you to run classic Roland synths in your DAW and then download or ‘plug out’ some of the sounds into System-1 hardware to play live – Roland has announced the next synth to be released for the system. As expected it’s the SH2, a synth originally released in 1979 and one that we’ve been looking forward to getting our hands on. The full press release is below, price TBA although we reckon it will be around £100. Check the review in MusicTech and on MusicTech.net soon…

Read below for the full Roland press release…

The SH-2 PLUG-OUT Software Synthesizer is a total reproduction of the classic SH-2 synthesizer from 1979. Renowned for its raw vintage tone, the SH-2’s dual VCO plus sub oscillator configuration dishes out devastatingly fat basses, edgy leads and wild effects. Designed for SYSTEM-1 as well as Mac or PC hosts, the new SH-2 uses Analog Circuit Behavior technology to faithfully recreate the warm, rich sound of the original with a level of authenticity that can only come from Roland.

In the late 1970s, synthesizers were undergoing a significant transition with the development of polyphony and tone memory. As the world’s synthesizer manufacturers raced to develop these new technologies, Roland launched a seemingly basic monophonic synthesizer – the now classic SH-2.

Although it was released around the same time as Roland’s JUPITER-4, a pioneer of polyphonic synthesizers, the SH-2’s functionality was rather conservative compared to that of the JUPITER-4. But its uniquely designed configuration – which consisted of two VCOs and a sub-oscillator that essentially gave it three VCOs – was capable of extremely fat and warm analog synth tones. To this day, many synth aficionados feel it produces the most earth-shaking, bone-rattling synth bass sounds of all time.

Back to the future

The SH-2 PLUG-OUT Software Synthesizer is an incredibly precise recreation that leverages Roland’s decades-old expertise and deep knowledge of the original analog units. Like other products in the AIRA series, this new SH-2 uses Analog Circuit Behavior (ACB) technology to faithfully capture the fine details of the SH-2’s sound, right down to the behavior and interaction of the individual analog circuits.

Everything has been reproduced exactly, from the VCF which is capable of self-oscillation to the attack and long decay characteristics of the steep envelope. The unique harmonic makeup and pitch wavering are present as are the complex interactions between parameters that result from the original analog circuit design. Even behaviors that occur only in analog circuitry are accurately reproduced, like the subtle effect on tonality when the user tweaks parameters unrelated to the actual tone being produced.

There are even some new features that were not available on the original. This new SH-2 has a VCO range that is expandable to 64′, two envelopes, reverb, delay and crusher effects, Autobend with support for reverse actions, and a tempo-syncable arpeggiator.

While multiple instances of the SH-2 plug-in can be used in any compatible DAW, the SH-2 PLUG-OUT Software Synthesizer offers seamless integration and unique capabilities for SYSTEM-1 owners. Connect a SYSTEM-1 and it becomes a dedicated controller, only lighting the appropriate knobs and sliders pertinent to the SH-2. Transfer sounds back and forth between the DAW and SYSTEM-1 and even use the SYSTEM-1 as a high-quality audio and MIDI interface. Or break free entirely and PLUG-OUT directly to the SYSTEM-1, creating a stand-alone, hardware SH-2 with real physical controls that can go anywhere and doesn’t require a computer.