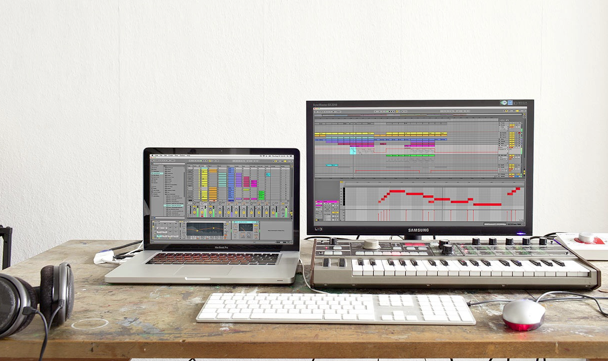 Just had exciting news from Ableton – A new update for Live 9 and Push – Read on for the 9.1 update features!

Ableton is pleased to announce the start of public beta testing of Live 9.1 – the latest version of the company’s flagship music software. This update will be free to all users of Live 9 and provides several inspiring new features and improvements.

With the 9.1 update Live users gain the ability to open two windows simultaneously on one or two monitors. This allows Arrangement and Session Views to be open side by side, or for Live’s sample display or MIDI note editor to be viewed in a separate window. This much-requested feature makes Live’s interface even easier to use and promises to be a workflow booster for many music-making scenarios.

For users of Push the Live 9.1 update introduces a newly-developed melodic step sequencer. Using Push’s pads, notes may now be entered manually or played by hand in real time. In addition, all of Live’s automatable parameters can now be step-sequenced and edited directly from Push’s encoders.
Additionally, Live 9.1 includes a new rendering algorithm for better quality audio when exporting from higher to lower sample rates – for instance, going from 96kHz to 44.1kHz.

The update also brings a host of minor tweaks, bug fixes and improvements.

Ableton invites all registered users of Live 9 Suite, Standard and Intro to take part in the public beta testing of Live version 9.1. The beta software update is available for immediate download at: www.ableton.com/beta/