The Ultimate Guide To Ribbon Mics

The technology may be nearly a century old, but the ribbon mic is making a huge comeback. In this complete guide, Huw Price reveals how you can kit your studio out with a ribbon or two for less outlay than you might think… Ribbon microphones were the first high-quality microphones available to recording engineers. They […] 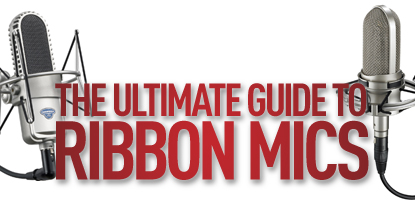 The technology may be nearly a century old, but the ribbon mic is making a huge comeback. In this complete guide, Huw Price reveals how you can kit your studio out with a ribbon or two for less outlay than you might think… 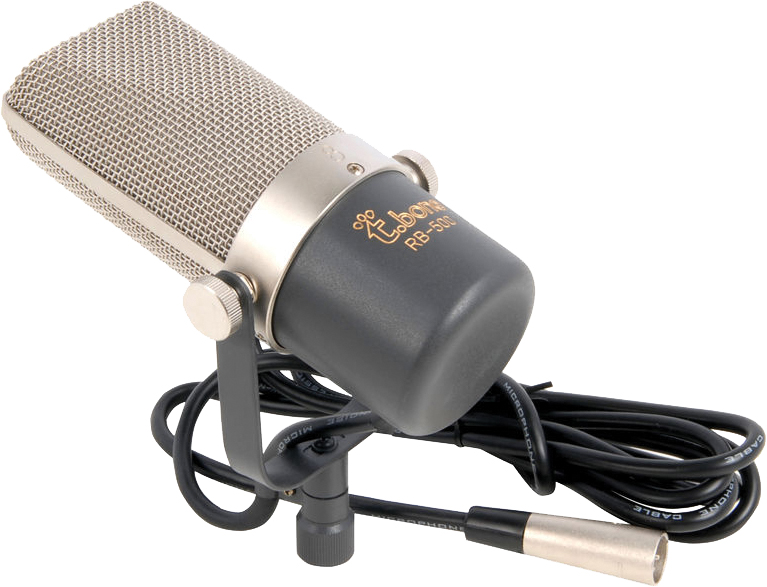 Ribbon microphones were the first high-quality microphones available to recording engineers. They may have their limitations, but the sound of the best examples can compete with any condenser. Even so, they fell out of favour for many years, but the last decade has seen a huge resurgence in their popularity. Some are very expensive, while others offer amazing sound quality for an incredibly low price.

Here we’ll be examining what’s available to all budgets based on the prices we found online at the time of writing (these tend to be lower than recommended retail prices). We’ll also be discussing how to combine placement technique and equipment to get the very best results. First, a brief history lesson…

Genesis of the Ribbon
The work of RCA employee Harry F Olsen during the late 20s culminated in the RCA 44A. This was the first commercially available ribbon microphone and many are still regularly used in top studios today. RCA ribbons set the tone for countless landmark jazz, country, soul and early rock‘n‘roll recordings, but they were rarely seen here in the UK. The BBC got hold of a 44A in the early 30s, but at £130 a pop – more than £5,000 in today’s money – it was deemed too expensive.

The corporation decided to design its own ribbon mic and engineers came up with the BBC Type A. Manufactured by Marconi for £9 each, variations on this mic continued to be used until the early 50s, when it was superseded by the 4038.

How they Sound
Prior to discovering ribbon microphones, this correspondent would habitually combine a moving-coil dynamic with a large-capsule condenser when recording electric guitar. The moving-coil filtered out the unwanted frequencies and provided all the midrange, while the condenser captured more of the natural tone, along with a dose of extra detail.

It was immediately apparent that a decent ribbon mic could cover all bases, combining the best qualities of both mics in one convenient package. Further experimentation demonstrated a smooth but uncannily lifelike and natural quality that seemed the perfect antidote to the harsher attributes of lesser-quality digital converters.

The lightning-fast transients and airy treble of a quality condenser may be absent and sticking them on snares or inside kick drums isn’t usually an option. Even so, ribbons make almost everything sound good and recordings made with them sit easily in mixes. What’s more, some ribbons make recordings sound massive and larger-than-life.

Many associate ribbon mics with the smooth tones of the jazz era, but they have featured on seminal rock recordings, too. Eddie Kramer used Beyerdynamic M160s to record Hendrix’s guitar tracks, and the drum sound from Led Zeppelin’s When The Levee Breaks was captured with M160s too. Recordist Steve Albini favours the Coles 4038, Royer and RCAs, particularly for electric guitar. Bob Rock has used 4038s for drum overheads with Metallica, just as Abbey Road engineers did for The Beatles.

How they Work
Compared with condensers, the operating principle of ribbon mics is straightforward. A very light, thin strip of corrugated aluminium foil (the ribbon) is suspended in the gap between two pole pieces, which are attached to a permanent magnet. As sound waves cause the ribbon to move inside the magnetic field, a voltage is generated within the ribbon itself. This is called induction, and the signal is fed to a step-up/impedance-converting output transformer.

This is similar to the way in which a moving-coil mic works – in fact, they’re both dynamic mics. However, the clever bit is that the ribbon itself acts as both the diaphragm and the conductor. Compared to the stiffer, heavier moving-coil arrangement, a ribbon is ultra-light and has far more freedom of movement. There is therefore greater potential for accurate frequency and transient responses.

Even so, there’s more to making a ribbon mic than lashing a strip of tin foil between two fridge magnets. The ribbon has to be loose enough to move backwards and forwards freely in response to air pressure. Sideways and twisting movements are undesirable, so most manufacturers corrugate their ribbons at either end, or along the entire length, to increase stiffness.

A ribbon is comparable to a guitar string because it can have harmonic nodes. If these nodes are audible they will colour the sound in an undesirable way. To avoid this, ribbons are kept very loose to maintain a resonant frequency below the hearing threshold. However, if it’s too loose, the ribbon may sag when the microphone is used horizontally. The BBC’s target resonance frequency was around 45Hz.

A simple formula defines the relationship between the physical elements of ribbon mics and how they determine the output voltage (e): ‘l’ equals the length of the ribbon, ‘u’ equals velocity of movement and ‘B’ equals the strength of the magnetic field – e = Blu.

In the next part, we’ll look at the practical side of using ribbon mics and reveal the best more expensive options. For now, check out the best mics available at lower price points. 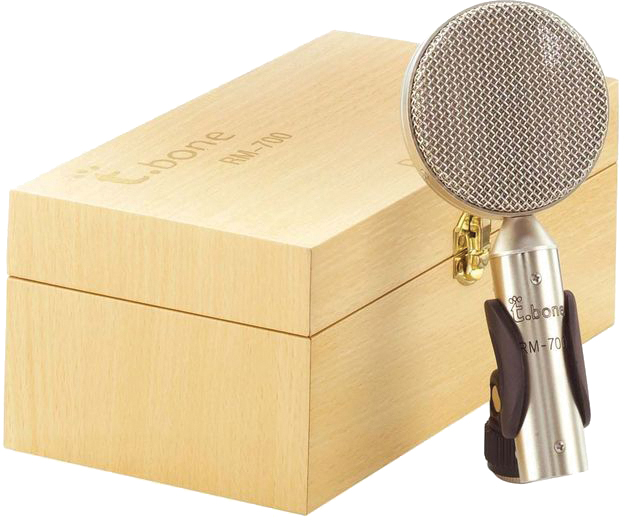 This is the T-Bone version of the Alctron HRM-15 that also shows up as the TNC Audio ACM-2 and Nady RSM-4. SPL handling is the same as the RB100, but frequency response is given as 20Hz–10kHz. A shockmount is included and it ships in a wood box.

It’s reported that the RM700’s ribbon motor is mounted towards the front of the mic. This off-centre design produces different sounds from the front and back, with extra brightness at the back. The downside is that using the RM700 as the ‘side’ mic of a mid-and-side arrangement is not ideal. Ribbons with this motor have an upper-midrange resonance peak just before the roll-off frequency. Consequently, they’re well suited for electric guitar.

Of all the T-Bone models here, the RB500 ribbon microphone has the most extended high-frequency response, with an upper figure of 18kHz. It also has a relatively long (2-inch) ribbon, -60dB sensitivity and SPL handling of 148dB. It comes in a soft carry bag and a yoke is used rather than a suspension mount 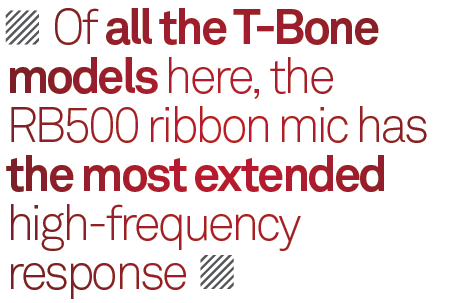 The motor grille is sizeable, so it seems the designers were trying to evoke the RCA look. Inside there’s a nylon mesh for extra protection from wind blasts. Unfortunately, the side effects it creates are phase-shift in the bass and treble attenuation. Removing the nylon protection is a popular modification that most consider an improvement. 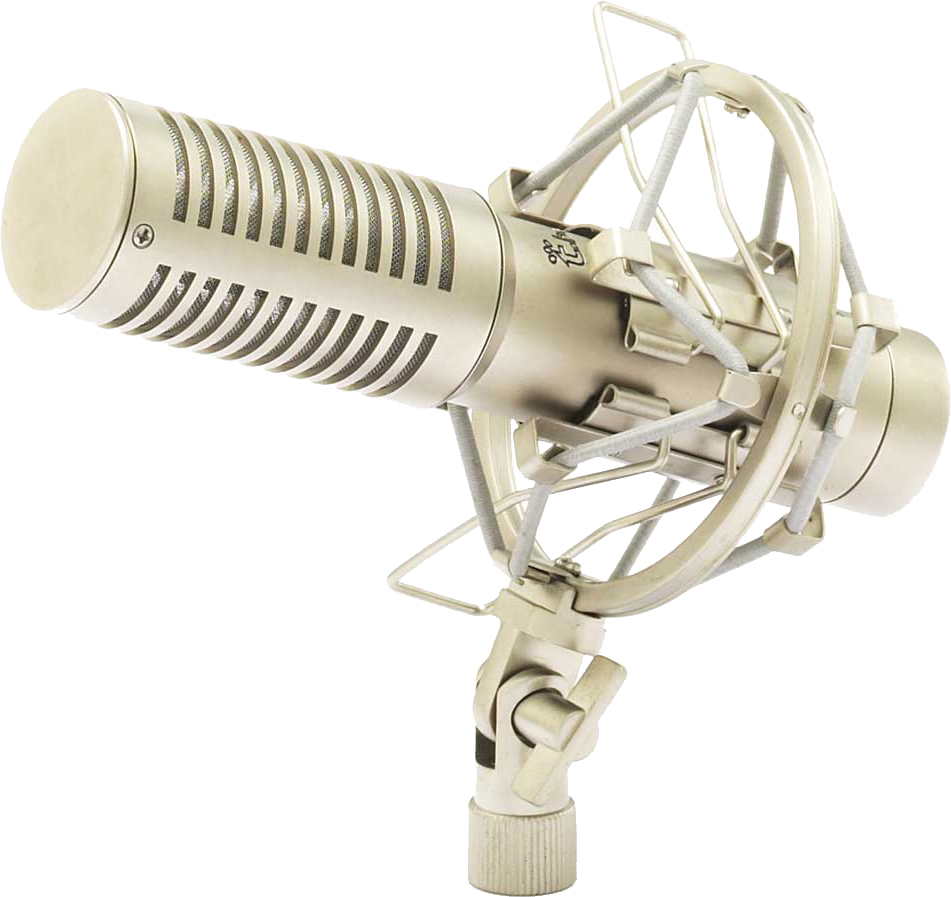 Another T-Bone offering that – as with the others in this price range of our buyer’s guide – is a re-badged Alctron mic from China (you can buy the exact same microphones under a variety of different brand names; see the Clone Zone box opposite).

The RB100 has a figure-8 pattern with a quoted frequency response of 30Hz–15kHz that starts to roll off at around 6kHz. Thomann is clearly confident about the quoted 148dB maximum SPL rating because the company provides a three-year warranty. It ships with a suspension mount.

The R144 is a side- address figure-8 ribbon. Accessories include a cleaning cloth and suspension mount. The 47mm ribbon is fairly long but the R144 isn’t overly sensitive, even by ribbon mic standards. Frequency response is given as 20Hz–17kHz with 250-ohm output impedance; SPL handling of 130dB means you will need to take extra care in use. The response graph shows bumps in the upper bass and upper mid, so most users report that the R144 works best with some help from an equaliser. 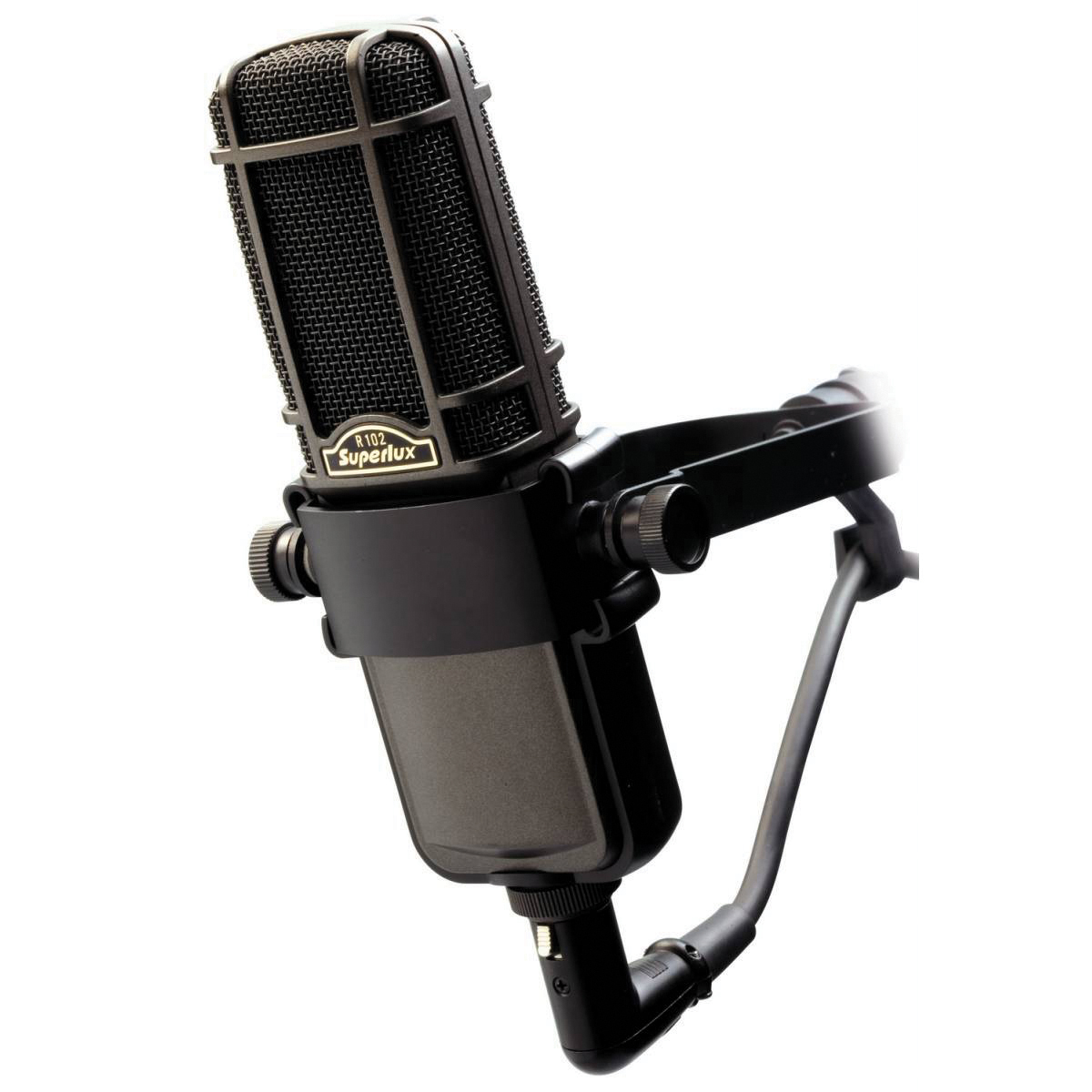 The idea of an active ribbon for around £100 seems incredible. Goang Fann, of Taiwan, makes microphones for ‘name’ clients in its Chinese factory, but Superlux is the company’s own premier brand of recording microphones. The R102 ships in a hard plastic carry case along with a yoke mount and six-metre cable.

Acoustic instruments present no problems and trebles sound true and natural. On electric guitar, the R102 effortlessly captures finer details, and proximity effect doesn’t get too extreme. Vocals sound fat and smooth, with a larger-than-life character and crisp consonants. This mic really is outstanding value for money.