Modular Synth Masterclass – Build Your Own: Part One

Eurorack is everywhere, with even the big corporations jumping on board this innovative format. David Gale plugs up a patch and considers the options for creating a new system… Just look at that. Boomstar’s Eurorack Modstar is one of the best-looking systems out there. We want! If I think back to my early years, music […] 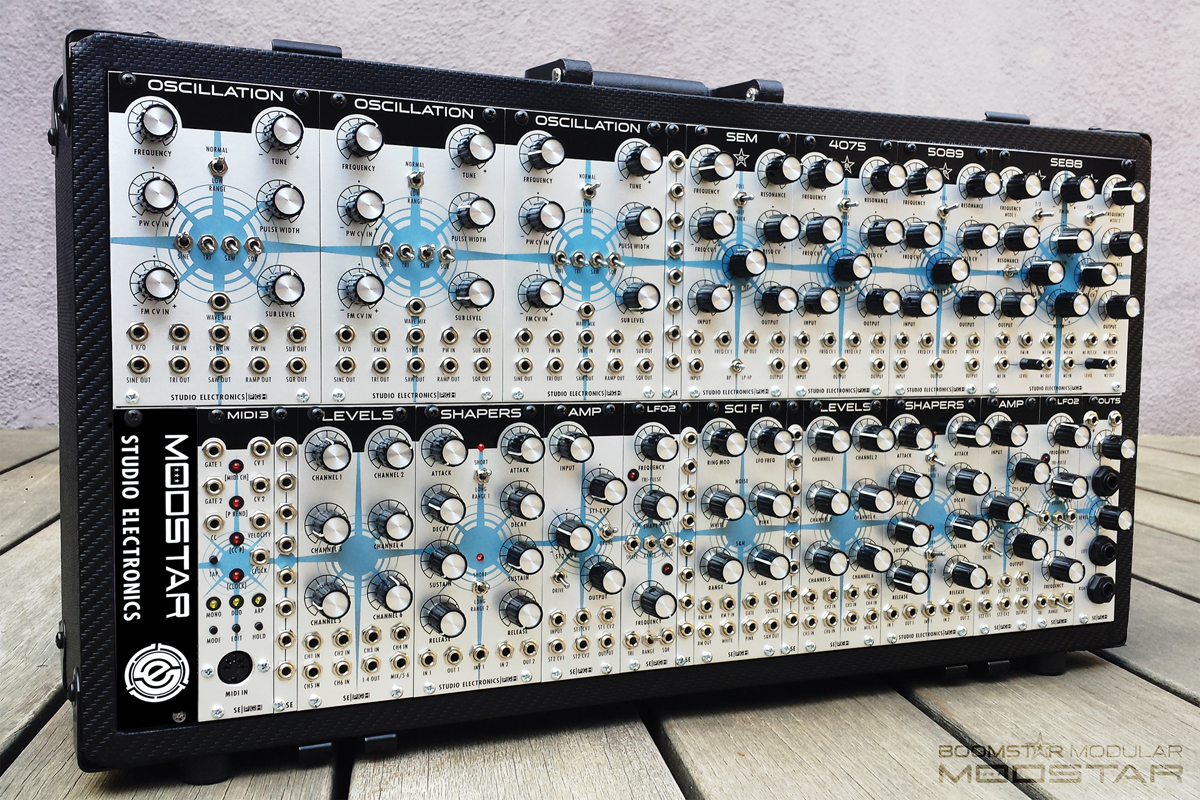 Eurorack is everywhere, with even the big corporations jumping on board this innovative format. David Gale plugs up a patch and considers the options for creating a new system…

Just look at that. Boomstar’s Eurorack Modstar is one of the best-looking systems out there. We want!

If I think back to my early years, music videos were not the commercially polished products that they are now, often making do with the star of the day singing, or more accurately lip-syncing, to their current single. However, certain videos stuck with me, as I was transfixed by what could only be described as a wall of sockets with an enticingly large amount of cabling plugged into the front.

As for many people, this was my first view of a modular synthesizer, and this is hardly surprising given that modulars of this time would cost as much as a small house! They were the preserve of pop stars, or more likely their producers. Jean Michel Jarre, Georgio Moroder, Yellow Magic Orchestra and even Stevie Wonder were huge advocates of this powerful technology.

One of the earliest exponents of the Moog Modular was Wendy Carlos, and for many, the front cover of the legendary Switched-On Bach album, with the Moog Modular being operated by JS Bach himself (well, a lookey-likey!), was equally awe-inspiring (it’s worth noting that Bob Moog objected to the original cover, as the headphones were plugged into the filter input, obviously meaning no noise would be heard).

Move on about 30 years to 1995, and a certain Herr Doepfer from Germany started producing some new designs for a compact modular synthesizer, which became the format now known as Eurorack. It developed into the most popular format for the synthesist who wanted to build up a modular system, with dozens of small and boutique companies springing up – building both traditional and quirky modules, all of which may have a valid place in a creative set-up.

The Nuts & Bolts
There is no doubt that the largest part of any initial Eurorack budget will be spent on the start-up and, in the very first instance, this means a case or cabinet and some power. Despite this, it is possible to cater for all budgets. 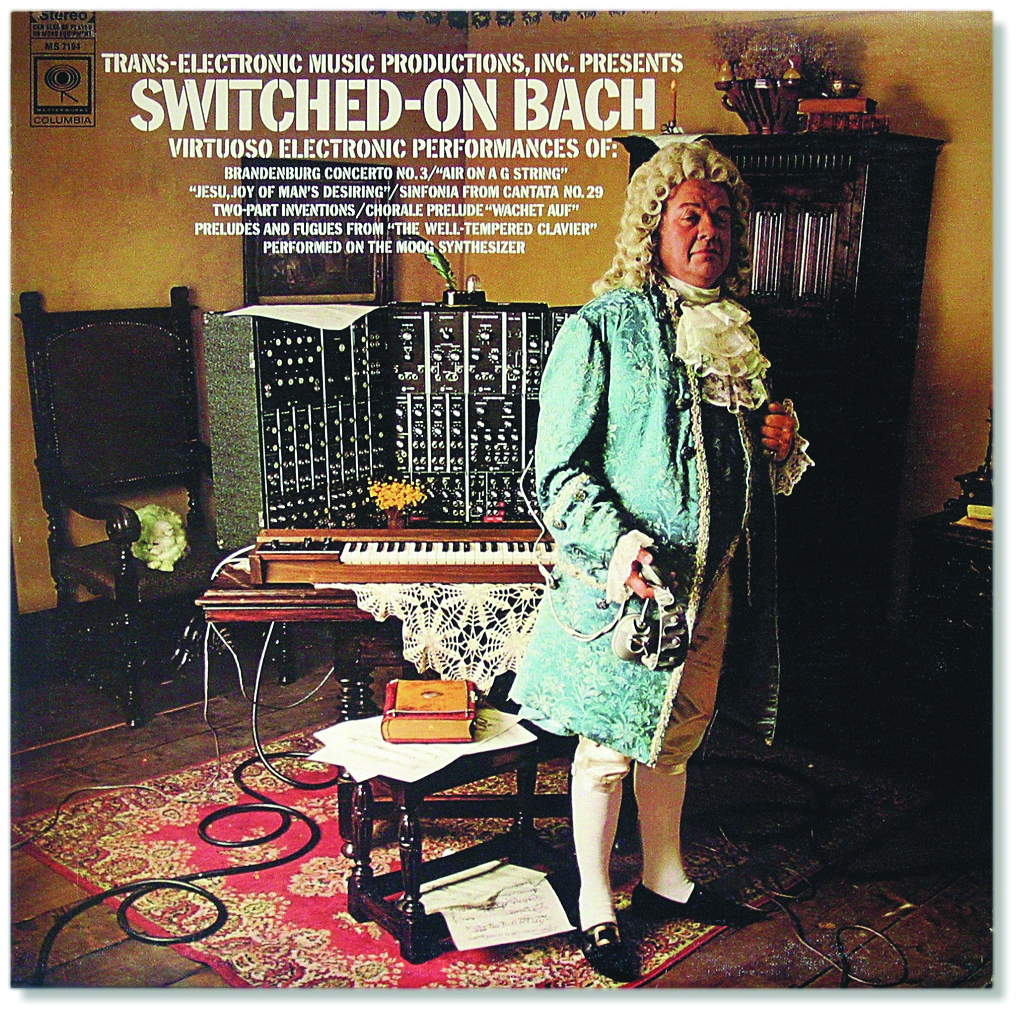 The first question to address is ‘do you need to be mobile?’ There are many cases available, allowing you to take your modular out on the road, but these do tend to be smaller in size, and more expensive than their cabinet counterparts, which are generally designed to stay at home in the studio.

Of course, there is nothing to stop you having both, and a mobile system can be used in both mobile and studio settings. A key feature of Eurorack is the format itself. The modules are all the same height, which is conveniently the same as a conventional 3U rack – 5.25 inches in old money. However, the width of modules is measured in a unit known as HP, a single HP being 5.08mm. Modules are screw fixed into rails, usually with M3 bolts, which are mounted top and bottom. 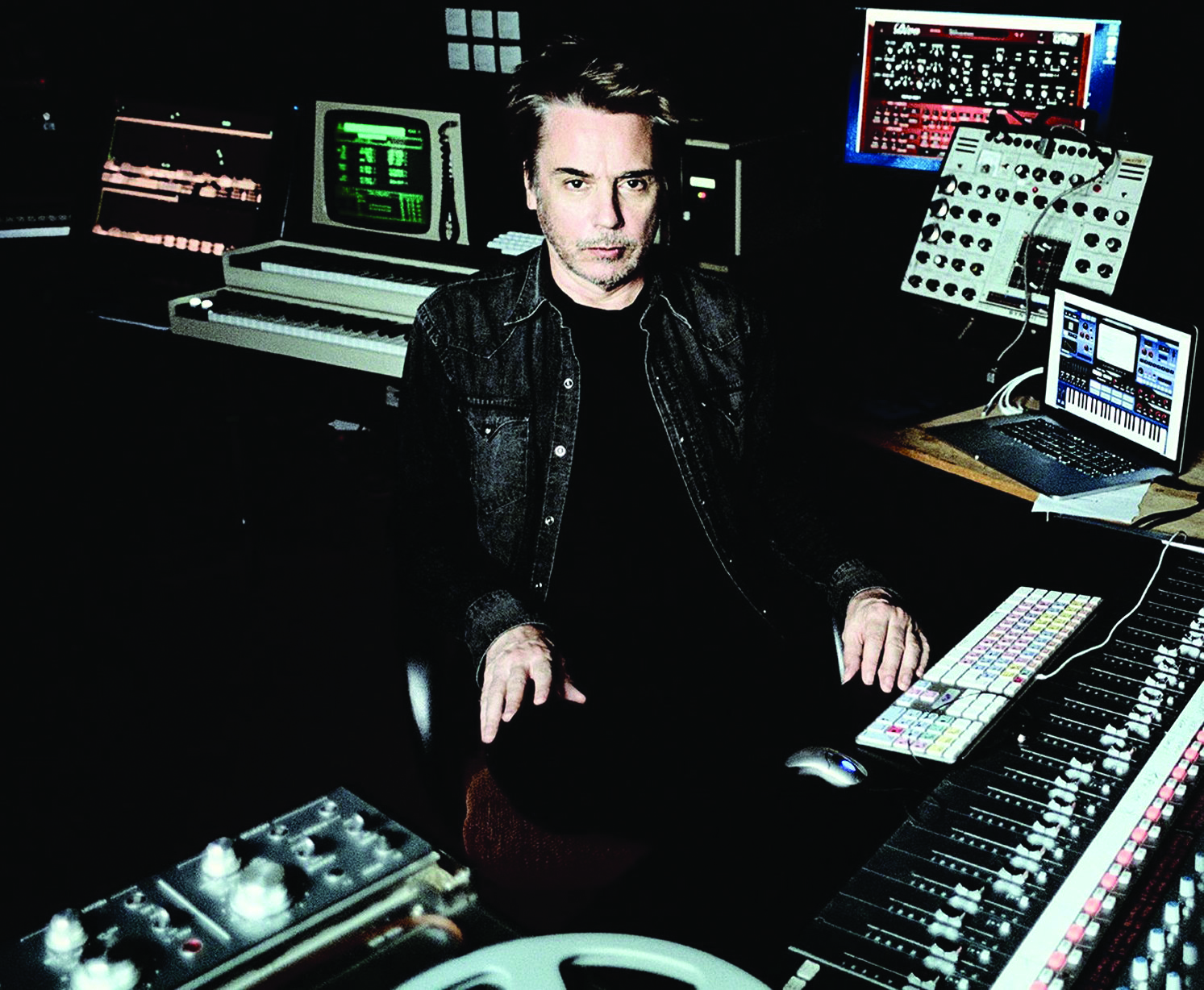 One of the earliest succesful users of all sorts of synthesizers: Jean Michel Jarre

To come back to our studio rack analogy, 84HP is about the same width as the aforementioned 19” rack format. From here, it’s a straight mathematical calculation, so a 168HP width rail will be twice as wide. As a consequence, certain sizes do seem to have become more predominant, rather than just plucking figures out of the ether, and they tend to be 48HP, 84HP, 104HP, 126HP and 168HP (other variants in width can be found!).

Keeping to these width sizes will mean you can buy cases and cabinets more readily, although if you are handy with the carpentry set there’s nothing to stop you buying Eurorack rails and cutting them to the size you require. There is a case (no pun intended) for sharpening the tennon saw and knocking something up from MDF if you like folding out the Black and Decker Workmate on a Sunday. 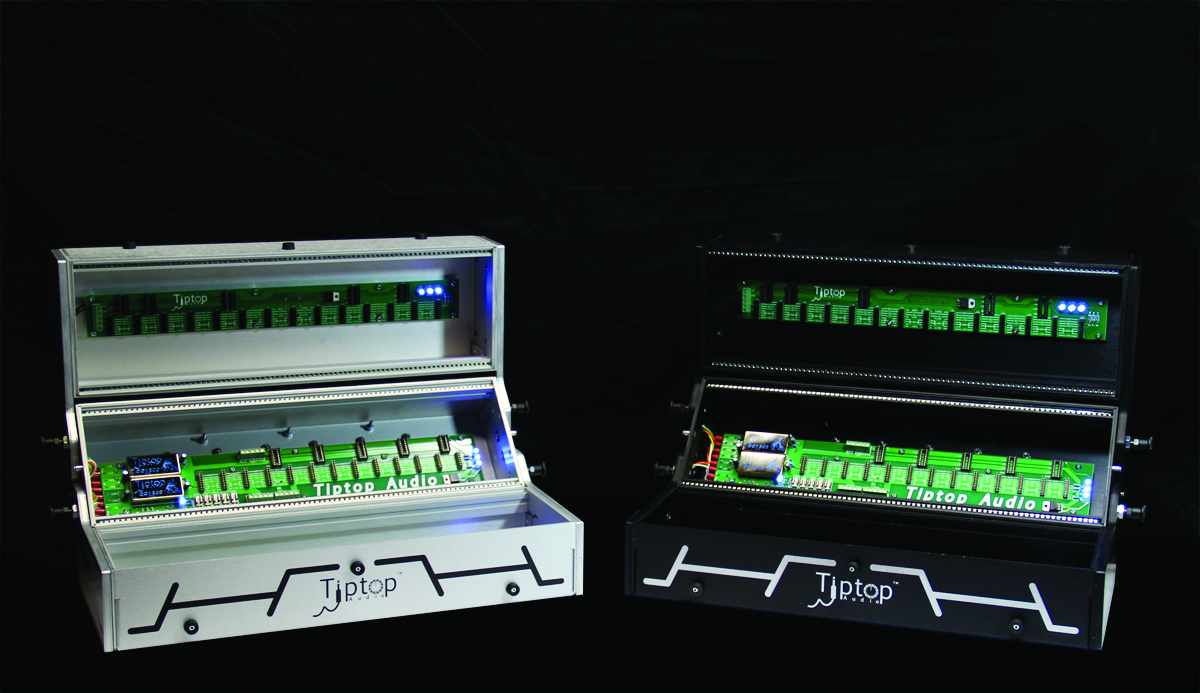 You’ll need a good case to get you going, like these from Tiptop. This is the Station 252 with pre-loaded Zeus power. Notice the blue LEDs signifying all is well with your power distribution

A Case For all Seasons
There are plenty of companies that have ‘off the shelf’ solutions for the beginner and smaller system. Tip-top Audio’s Happy Ending Kit comprises a 3U 19” rack mount kit of 84HP, with a uZeus DC power supply. Apart from being sensibly priced at just over £100, this will allow you to plug in and power 10 units (expandable), and has the added advantage of fitting into a rack, which you may already have.

Next up is the company that started the whole Eurorack adventure. If you are on a tight budget, Doepfer is a great place to start for most items, as its units are very well built and highly cost-effective, and they deliver in the cabinet department too. For around the £200 mark, you can look at one of the company’s low-cost cabinets, in the shape of the LC-3, LC-6 or LC-9. These are respectively one, two or three rows of Eurorack, housed in a natural wood cabinet. It’s basic, but a superb option, and many purchasers then choose to stain or paint the wood, which can look very effective.

They also have an in-built power supply. However, unlike the previously mentioned Tiptop system, it is AC-based, rather than DC, which essentially means that it has a large transformer built into the back of the case (see Power later). 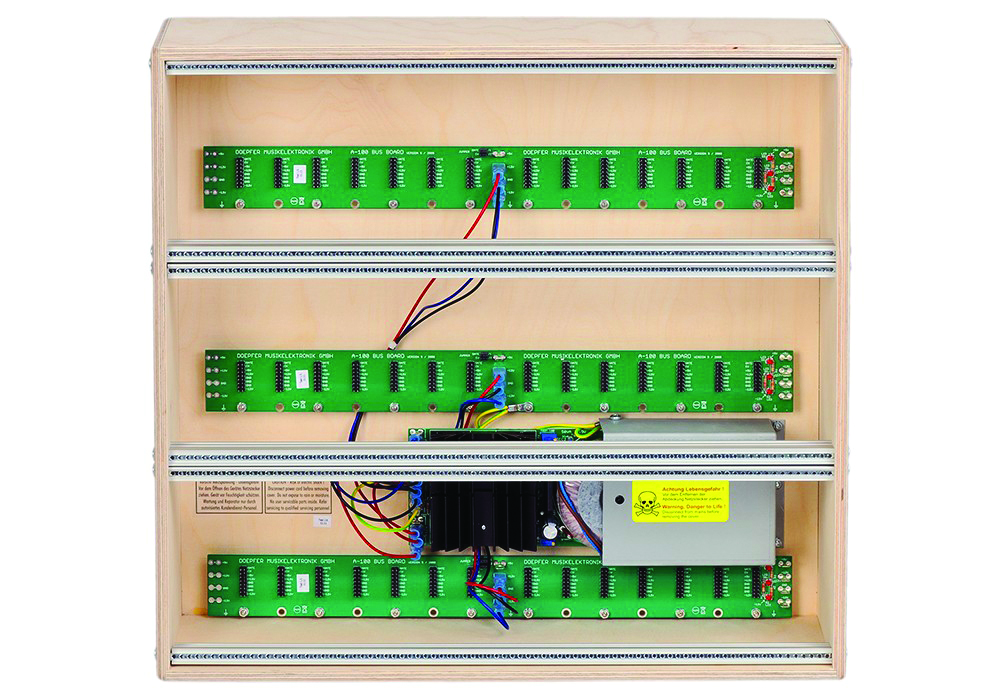 Doepfer was one of the first companies involved in Eurorack synths and makes several specific racks, including the LC-09: three rows of 84HP, with a pre-loaded AC power supply

If you want to go a little more bespoke with your Eurorack design, there are quite a few companies that make small cabinets and cases without power, and you should not be afraid of buying a case and fitting your own power supply. Smaller single- or double-row cabinets, that fit nicely on a desktop, are known as skiffs. You’ve only got to type ‘Eurorack skiff’ into eBay to find several carpenters making real wood skiffs for very sensible money.

One such furniture maker is Synthracks.co.uk, which has a proven track record in making studio furniture, and now Eurorack skiffs and cabinets, available to buy directly online.

Some companies also produce skiffs with the option to expand. Pittsburgh Modular, with its Cell series, and Moog, with the 60HP skiff, both offer solutions where you can mount two or even three units in a desktop system. Very tidy with a small footprint.

If a skiff is going to be where you feel you might venture, be aware of one small point. Skiffs, by their very nature, tend to be quite shallow in depth, and whilst most Eurorack modules are not especially deep, some can catch you out, so always research the depth of the modules that you think you might purchase first. Two-row skiffs do tend to be at a slight angle, so the front of the skiff may well be shallower in depth than the rear, giving some room for manoeuvre. You might also need to place bus boards in the skiff, which will reduce the depth further (again, see power later).

Moving into the mobile arena tends to immediately push up the price tag. Monorocket makes some wonderful case-based designs, which vary from small, single rows to much larger case sizes. These are available with power, so are a good solution, but do start from a price of around £500. Pittsburgh Modular also makes a series called ‘Move’, in which you can buy a complete system.

The Move 104 and 208 are one and two rows respectively, and come complete with power. You can also buy the Move 208 half full of Pittsburgh modules, known as the Foundation 3.1+, allowing you to immediately expand as soon as you feel the need. 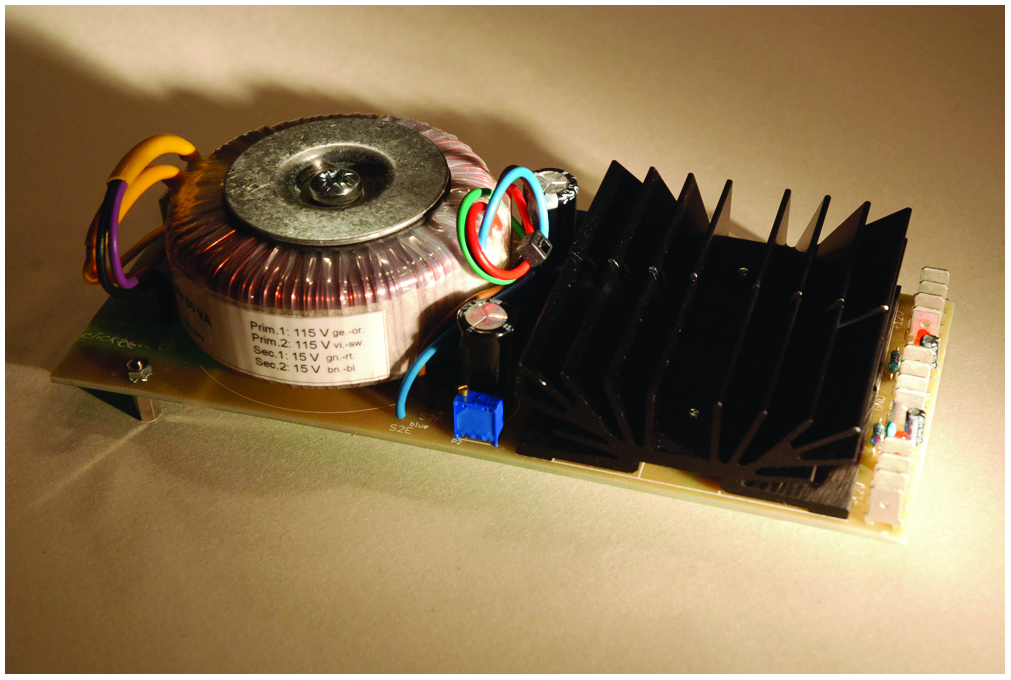 DIY Cases or Cabinets
If the temptation to knock up a cabinet all of your own is too great, then you can find plenty of help online. A good starting point is www.muffwiggler.com, which is an online community of fellow modular users. Apart from all the usual forum-type advice on all manner of subjects, you can find pictures and plans here that will point you in the right direction.

Similarly, good advice can be sought from clicksclocks.de, which was set up by Stefan Burbella some years ago, as both a resource and a shop for anyone wishing to make their own cases or cabinets. Rails, power supplies and everything else that you might need are available here; in fact, all the things that you won’t be able to get at your local DIY shop. Doepfer also makes and sells components and kits, offering a one-stop solution for the DIY-er!

Other Options
Looking toward the upper end of the market, Ross Lamond has been making Eurorack cabinets of enviable quality for many years. His products are hardwood designs with or without power and Ross recently completed what is thought to be the largest single Eurorack case in Europe, consisting of nine rows of 168HP. His cabinets start at £250 for an unpowered skiff, and creep up according to size and power.

It would be remiss of me to talk about all of this without recounting the direction that I elected to travel in my own quest. I decided that I wanted to have a purpose-built case, which looked a little like a large EMS VCS3, predominantly because I also wanted it to match my existing studio furniture. Eurorack is a hard habit to break, hence the nickname ‘Eurocrack’, and the overwhelming point that many friends mentioned was that whichever direction you take, you will probably always want a bigger case or cabinet, so I elected to have a cabinet made of 126HP and six rows.

I also wanted to fit my own power, and do so in stages, in order to keep the initial cost down. Having said that, I also know of one person who has a large rack-based system, where they keep buying a 3U rack kit every time they run out of room. So it might not look as nice aesthetically, but it is clever because it is ever-expanding, and I’m sure it sounds just as fine as my system!