Hollin Jones continues his explanation of how using MIDI correctly can transform your recording setup…. 11: Groove Quantize for a Better Feel Most DAWs have realtime MIDI quantization systems that you can use. In Reason’s case it’s called ReGroove and it’s essentially the same as using a MIDI insert effect, except that it’s more flexible. […] 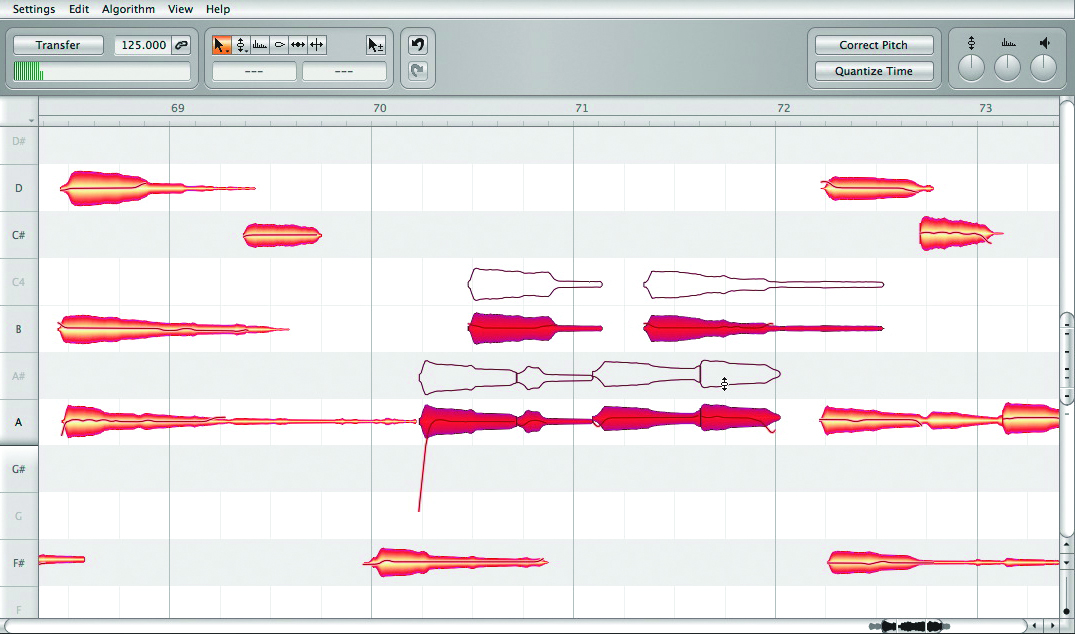 Hollin Jones continues his explanation of how using MIDI correctly can transform your recording setup…. 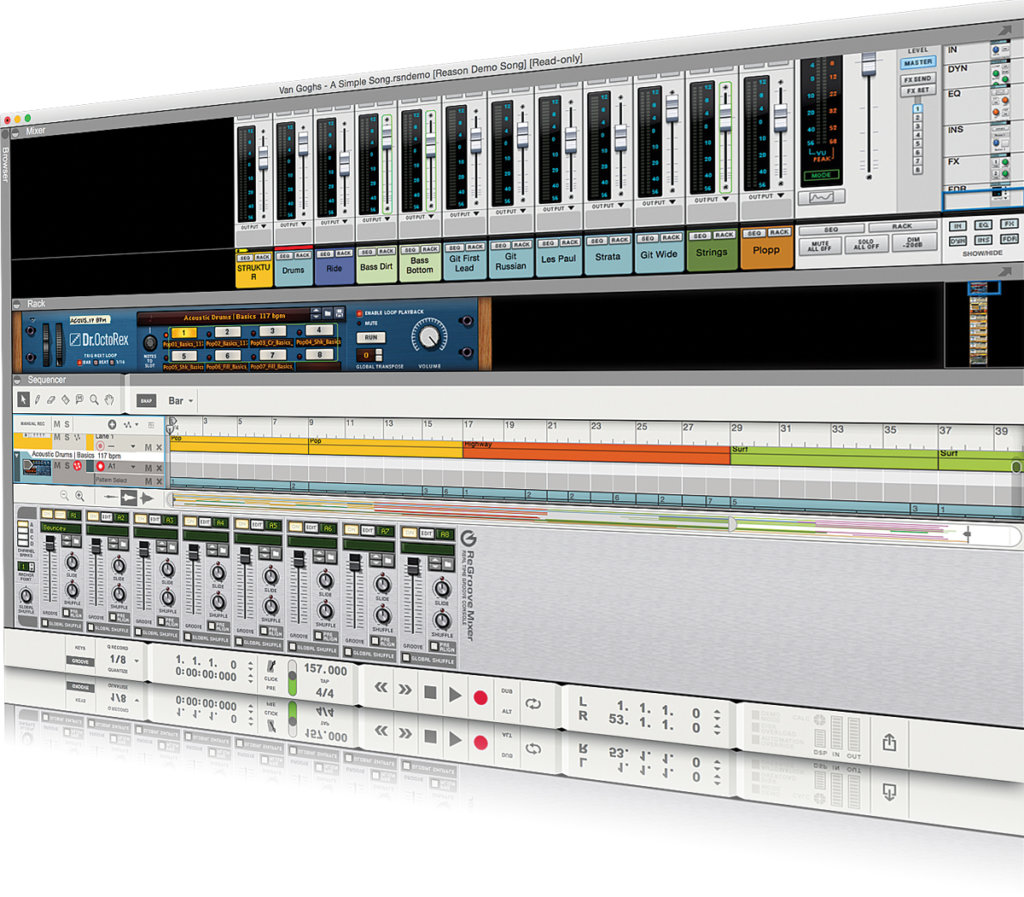 11: Groove Quantize for a Better Feel
Most DAWs have realtime MIDI quantization systems that you can use. In Reason’s case it’s called ReGroove and it’s essentially the same as using a MIDI insert effect, except that it’s more flexible. Reveal the ReGroove mixer and you can route any sequencer track or note lane through any of its 32 slots, each of which can use a separate setting. Or, route several parts through a single slot to match settings. It’s an easy way to add humanisation to parts, and the groove remains virtual until you commit it to a sequencer track.

In other DAWs you can use the regular quantize menu to extract groove from existing MIDI or audio clips and apply it to others, changing it as you go if you like. This is the trick to getting MIDI parts to sound more like they have been played by a real person.

12: Think Outside the Box
MIDI is insanely flexible and can be sent literally anywhere from your DAW, so it’s not always necessary to only use virtual instruments. Modern software sequencers are capable of some amazing programming tricks, but MIDI is a standardised protocol and, as such, is based on rules that all MIDI instruments, software or hardware, have to adhere to.

What this means in practice is that your vintage hardware drum machine or old keyboard workstation can be hooked up to a MIDI track from the latest version of Logic, Live or whatever you’re using. Connect the audio outputs of the hardware to your mixer or your audio interface to route it back in for recording and you can easily integrate hardware into your setup. Most software now allows for delay compensation to deal with the small lag in signal that can sometimes occur if you do this.

13: Take Advantage of Arpeggiators
Arpeggiators are a brilliant way to program MIDI and many virtual instruments have one built in. If not you can often find free or inexpensive arpeggiators as MIDI plug-ins, and many DAWs have one available as part of the MIDI track or as an insert effect. They will sync to a project’s tempo by default and make it easy to create patterns, beats and basslines with a few clicks of the mouse that sound great.

Arpeggiators are a much quicker way to generate complex MIDI parts than playing by hand or drawing data in with the mouse, and generally have multiple pattern banks so that you can store several patterns and automate them to flip at different points in a song. You can convert the arp data to notes if you want to export it. Advanced hardware controllers like NI’s Komplete Kontrol have specialised arpeggiation tools of their own that make it easy to play very complex parts with just a couple of fingers.

14: Speed up, Slow Down
MIDI is especially well suited to tempo changes mid-project, so if you’re planning to use speed changes in a song, try to use MIDI-triggered sounds rather than audio. Although audio is increasingly able to be manipulated in this way you can get a much wider range of speed changes if you stick to MIDI parts.

15: Know the Score
DAWs increasingly support scoring so you can convert MIDI parts to score data with a couple of clicks. Even if you don’t read music, you can create parts for those who do to read. This can then be printed, and you don’t need a specialised, separate program to do it. You don’t even need to be able to read manuscript yourself.

16: Overdub and Loop
You can set your system to record MIDI in a loop, and then either blend the newest parts with the already recorded ones or create a separate take for every pass that’s made. Maintaining different parts in lanes on a single MIDI track gives you more flexibility to experiment and edit, muting and soloing different clips. You generally also have the option to combine the lanes into a single part if you wish.

17: Don’t Panic!
Software and hardware often have a Reset or Panic mode, which sends an ‘all notes and all parameters off’ command to any connected MIDI devices, be they hardware or software. This is very handy to know about when you’ve stopped playback but a note has stuck on. Rather than quitting the software, try to find the panic or reset command.

18: Randomise Parts
MIDI clips in a sequencer exist independently of each other, so you can easily create variations in some but not others by editing them. Alternatively, use randomisation or MIDI processing functions to alter parts in ways you may not have thought of. Label or colour the changed clips to make it easy to keep track of what you’ve altered. 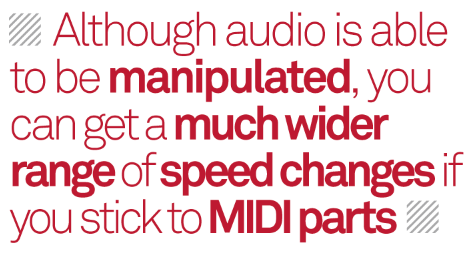 19: Quantize while Recording
Many DAWs have an option you can activate that quantizes MIDI parts based on your specified settings as you play. This can be good if you’re not a confident player, or simply want to save time quantizing afterwards. Even if you over-quantize you should be able to bring back a more human feel using groove quantizing post-recording.

20: Extract Pitch to MIDI
Software such as Melodyne enables the extracting of audio pitch and micropitch to MIDI and this is also available in some DAWs such as recent versions of Cubase. A practical use of this is to quickly extract the timing and notes of a vocal part to MIDI and apply it to an instrument so it ghosts the vocal part precisely, resulting in a bigger sound.