Rob Boffard continues our look at getting yourself started with a job in the music industry… Making Connections We’ve harped on about the importance of networking a lot in these pages. That’s because it’s important. Often boring and frustrating, yes, but important. And that goes double if you’re trying to forge a career in the […] 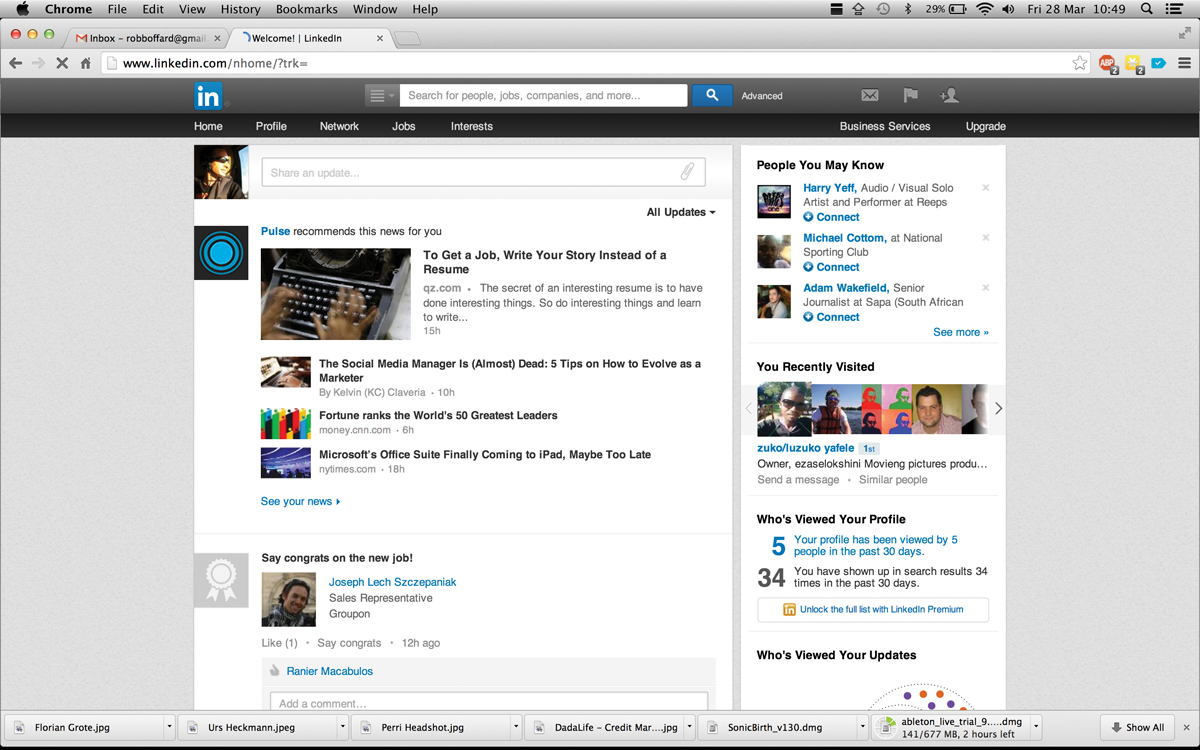 Making Connections
We’ve harped on about the importance of networking a lot in these pages. That’s because it’s important. Often boring and frustrating, yes, but important. And that goes double if you’re trying to forge a career in the audio industry.

You’re not just selling music here, you are trying to sell sophisticated pieces of hardware and software. Conferences are key. If you can, get to events such as Midem or Musikmesse. Yes, there’s an outlay (plane tickets, event passes, etc) but it will be invaluable professionally. These are places where the makers gather, and if you’re serious about making connections you could certainly do worse than spend some time hanging out here.

Actually finding communities of people who’d be willing to part with their cash for your product is harder than it sounds. Gearslutz, KVR Audio and the like may have messy message boards and outdated interfaces, but they can be a repository for a lot of business if you play it carefully.

Try different strategies and see what works: a free VST may draw people to your site, or maybe an extended, fully functional demo period for one of your plug-ins. Either way, your goal is to find and maintain customers, and get feedback – if something doesn’t work you need to know about it sooner rather than later.

Lastly, don’t forget to make connections with local studios and producers. Often it can be as simple as giving them a copy of your plug-in, or plug-ins, to use on their system. No studio engineer or producer will turn down a free VST, so take full advantage. Be sure to check back after a month or two to see if they’ve been using it and if they have any comments. 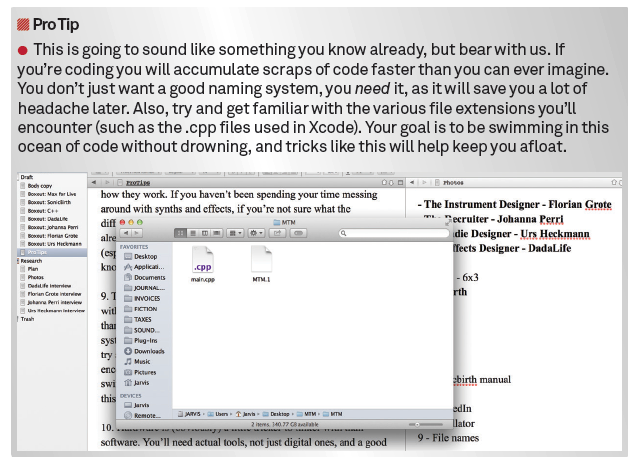 Dear Sir…
If you’re thinking about applying for a full-time job in the audio industry, then you might reasonably ask whether there are actually that many jobs available at any one time.

Given the current economic conditions (boy, do we wish we could stop saying that) it’s no surprise that the audio industry has been hit hard too. To some extent, it’s fared better than others as there’s always been a need for audio professionals, but there are still fewer jobs available now than there used to be. But that doesn’t mean there aren’t some positions to apply for. Take a look at the careers page for companies such as Native Instruments, iZotope or Waves – there are usually plenty of roles going.

Jobs have also started popping up in odd places. There are more companies now, and with the rise of the internet their customer bases have expanded and they need people to help deal with the demand for their products. The big, traditional companies are certainly still hiring, but they aren’t the only ones you should be looking at. 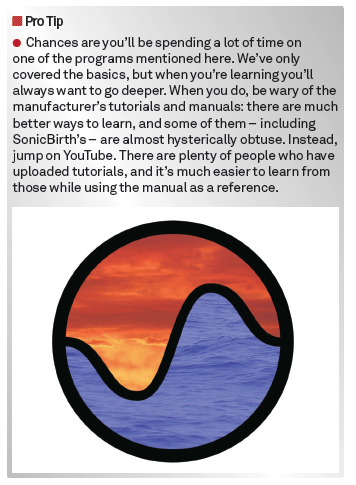 If you’re prepared to work freelance there are plenty of businesses that require outside help from time to time. You need only one ‘in’ to get started, and once you’re dropping in and out of companies like an audio paratrooper to help set things right you’ll find more and more opportunities opening up.

Generally, you’ll get in full-time in one of two ways. First, a company might approach you, impressed with your skills and your software, and eager to bring you on board. You really, really want this to happen. It’s rare as hell but if you’ve worked hard and created something special, it can happen.

The second way is more traditional: applying for jobs. Generally speaking, this is the same as applying for work in any other industry. Interviews, salary expectations, portfolios – all of these come into play. We’re not going to go into the ins and outs of a successful job application beyond saying that the one thing you need to demonstrate is passion.

Click Here to Read Our Guide To Programming SonicBirth

Showing that you care for audio and music, and that you let that show through in your work, covers up a lot of sins.
But a word of advice: in the audio industry, things move slowly. Job applications can sometimes take months, so don’t be disheartened if you don’t hear anything for a while. 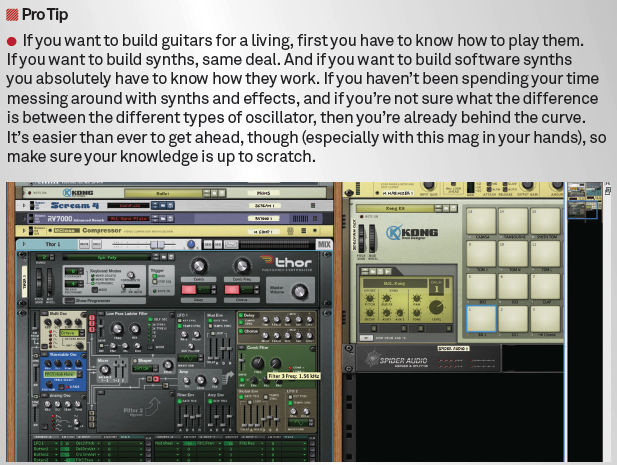 Code Breakers
Do you need to code? If you’re in the business of designing software or hardware, then yes.

We wish there was a way around it, but there isn’t. Sure, the people we’ve spoken to for this feature have said that knowing programming languages such as C++ or Python aren’t absolutely essential, but, honestly, you’d have a very hard time finding work if you can’t do a bit of code compiling. It comes down to choice: if a company is looking at hiring you or someone who has your skills plus a coding background, they’re going to go for the second guy. 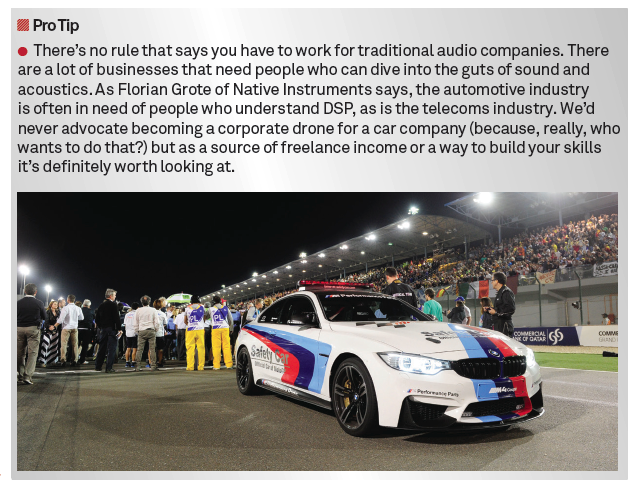 Even if you’re doing a job that doesn’t involve tinkering with the guts of the instrument, having a knowledge of coding still helps. C++ is an excellent place to start, as many companies still use it to build their programs. We’ve dealt with some very basic C++ in this guide but if you’re willing to spend time with it you’ll find that it gives you a real edge no matter what job you’re applying for.

Another thing worth knowing is DSP theory, especially if you’re interested in the engineering side of things. DSP – Digital Signal Processing – is a very technical and complex body of knowledge that involves understanding how signals are changed, and the mathematical principals that underlie them.

Unlike coding this isn’t something we’d necessarily recommend for everyone who wants to work in audio as it requires serious study to master, usually through a degree. But if you do have it, you can take the edge that C++ gives you, and consider it infinitely sharper.

You’ll need to have a basic knowledge of the programs that see action in the audio industry: Xcode, Git, Visual Studio, Wwise. A lot of these are complex enough to demand guides of their own, so we won’t go into too much detail on them here, but expect to be tested on your knowledge of how they operate.

Top Marks
So where can you learn these skills? You won’t find out how to create plug-ins from scratch at a dedicated audio school, at least not in the UK. The three big ones – Point Blank, ACM and SAE – are all excellent, but they’re geared towards music production and the music business (although SAE does offer some programming modules in its advanced courses).

Ultimately, the best weapon you can have is a BSc in electronics or engineering. We realise this isn’t a realistic goal for many people but fortunately it’s a nice-to-have, not a must-have. If you’re interested in furthering your knowledge there have been a plethora of coding courses popping up recently. 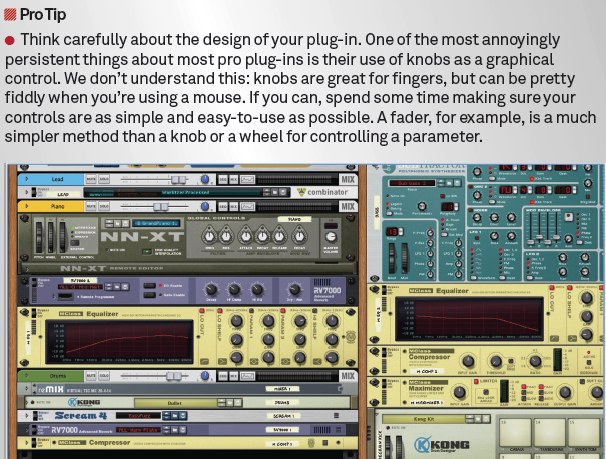 Companies such as Steer, Rewired State, Treehouse and Code Academy all offer courses at varying prices – Treehouse, in particular, has gotten rave reviews and is remarkably affordable.

As you can see there are many paths to making it in the audio industry, so figure out which is the most realistic for you and follow it!