Making music on the move has long been a reality with your iPad and iPhone and now the iOS format can integrate perfectly with your recording studio, so here is MusicTech’s Essential Guide to iOS music production… The history of music technology has always been exciting (well, to us here at MusicTech, naturally!). That’s not […] 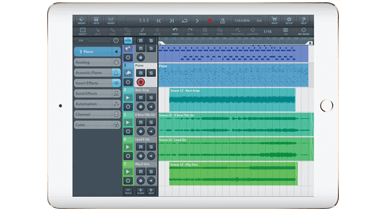 Making music on the move has long been a reality with your iPad and iPhone and now the iOS format can integrate perfectly with your recording studio, so here is MusicTech’s Essential Guide to iOS music production… 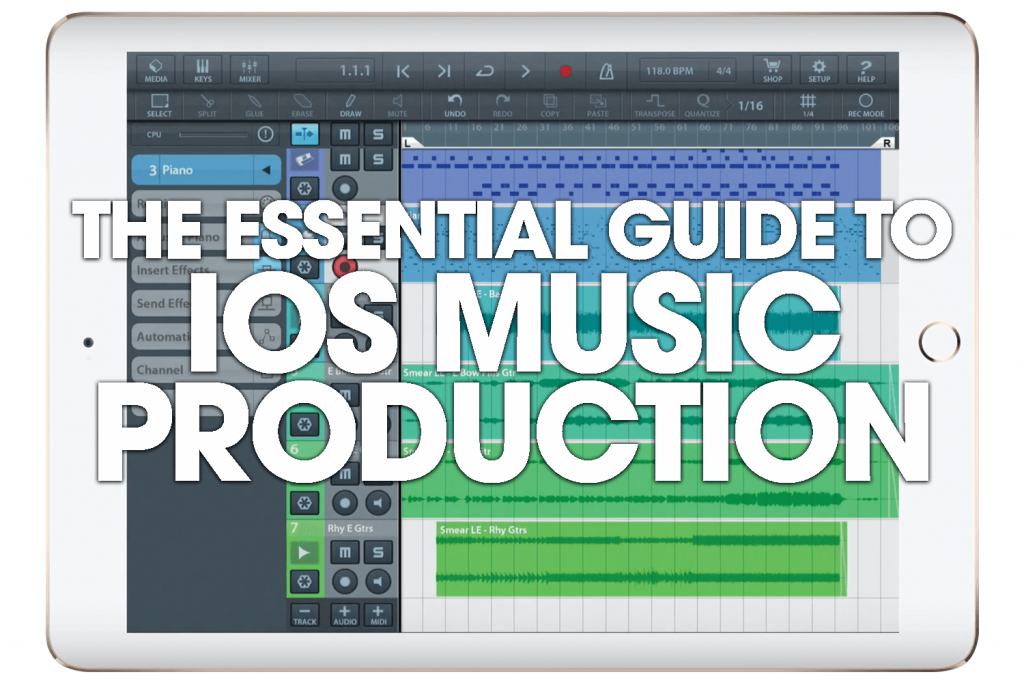 The history of music technology has always been exciting (well, to us here at MusicTech, naturally!). That’s not to say that it hasn’t had its moments of darkness – strap-on synthesisers, for example – but the last few decades have seen the technology that lies behind studio production twist and turn on a quite magical journey.

At one time, it was all about ‘digital’ technology, then ‘in the box’ plug-ins, then a swing back to ‘analogue’ – all phrases that studio boffins have come to know and love, as technology advanced and swept us all along.

But who could have predicted at the turn of this century that we would become obsessed with ‘touch’ technology – that swiping, gesturing, pinching and tapping would become so much a part of our existences and that mobile would become the latest tech to sweep the music-production world?

The Apple iPhone was 10 years old last year. It seems older; it feels like it’s been with us forever, such is its ubiquitousness.

A decade isn’t that great a time period, but Apple has shifted more than 1.2 billion of them. The iPad has sold close to 400 million units since its launch in 2010, so the iOS software that drives both of these devices has been touched by a lot of people – a big chunk and proportion of the world’s population.

Apple itself has never made a secret of the fact that it wants to dominate our total music experience: from making it, right through to downloading, consuming and listening to it (and, of course, paying for it), so iOS was always going to be part of that plan.

The company released a version of GarageBand for iOS in 2011 (initially for the iPad, but v1.1 supported the iPhone, too), which remains one of the best-value music-making apps out there. Like Logic – its much older and bigger brother – you could see it as basically cheap software to sell expensive hardware.

Yet the genius of the whole iOS format was, of course, Apple’s open-door policy for iOS app development, meaning that anyone can, did and still does produce apps for it. Pretty soon after its release, many other companies, both large and small, started producing music-making apps or touch instruments for iOS, and many of these are still popular today.

Plus, it wasn’t long before recognisable companies who had already been on that music-technology rollercoaster ride joined the fray. Big-name companies such as Korg, Arturia and Steinberg were among the first ‘traditional’ studio-gear companies to embrace the iOS format, seeing the huge potential market as one that would make music production less about the niche and geek and more about the norm and chic (not to mention the potential profits within this vast new world Apple had unleashed).

For a few years, the January NAMM Show, where such companies display their new wares, became something akin to an Apple developer conference. You couldn’t move for the latest Alesis or Focusrite iPad interface, or the latest app to turn you into a touch DJ. For a while, it looked as though Apple would engulf the studio world…

To be fair, though, as can often happen with these great shifts in technology, the bandwagon was rolling just a little bit too fast for the pesky general public to
keep up with.

We didn’t suddenly have the entire world’s population making music on their phones – can you imagine your bus journey had that happened? – nor did existing producers sell their entire studio setups and go iOS. That might have been due to other apps. What do we really want to do on our zombie-infested journeys into work? Think up a tune, or play Angry Birds?

And to many of us, the touch experience remains not quite tactile enough to give us what we want from creating music… perhaps current producers are happy with their existing banks of analogue outboard.

The other craze which has also held back many from total iOS music making is the Eurorack phenomenon – the very antithesis of iOS, its proper plugs and wobbles combining to tell the iOS world to take its gesture controls and shove them up their oscillator.

However, the history of music technology has shown us that after the initial craze and consequent lull, an even and sensible balance is usually reached.

So now, after a few years of iOS, several landmark advances and product releases have made iOS music production, or at least iOS integration with desktop setups, not only a reality, but an absolute music- production blast.

Anatomy of an iOS DAW: The traditional option 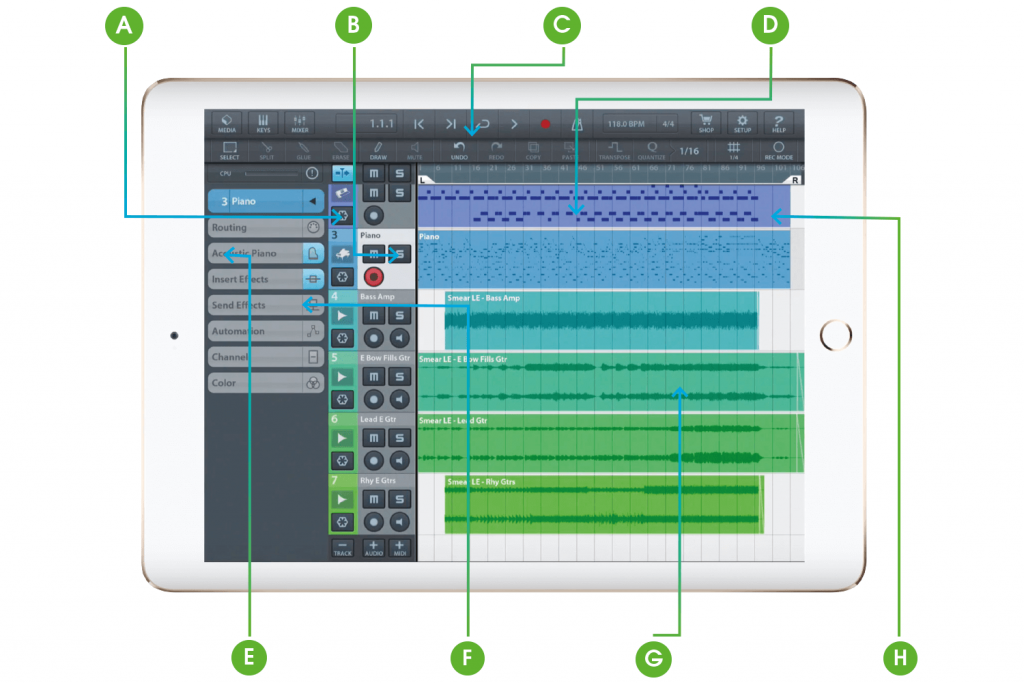 This is Steinberg’s Cubasis app: very much one designed in a traditional way, with song tracks placed top to bottom on screen.

Of course, the benefit of iOS is that most controls are touch activated. In this case, you can mute and solo each track.

Again, these are laid out as you’d see on the desktop version of Cubase, with Transport controls and other Global options all together.

Just as with a traditional DAW, notes are broken down into MIDI (the horizontal lines) and audio (the waveforms).

For each MIDI track, you select an instrument sound for your notes to trigger. Here, MIDI Track 3 is highlighted, which triggers a piano.

Each track can also have effects assigned to it, as well as automation – where you record, for example, the volume fading down.

Click on an audio track to edit the sound using gesture controls such as pinch and open up edit features including Trim and Reverse.

The song arrangement takes up much of the screen and again, flows left to right in traditional style, as on older desktop DAWs.

Arguably the first and most important device to help make iOS more studio friendly was the Apple Camera Connection Kit. This is simply an interface that allows lots more interfacing options with the outside world, enabling you to use better-quality audio connections and microphones with your iOS device.

Audiobus was one of the key platforms for music makers, in that it introduced the ability to run different apps together and pass data between them – a synth running with a DAW, for example. So, rather than your apps sitting there, just like individual instruments they could become suites of software rather (but not exactly) like a desktop environment.

Inter App Audio (IAA) is a similar system and the latest versions of it take signals in from the outside world, throw them through compatible apps and spit them back out – everything you should need – but not quite, as it goes…

The problem is that you still occasionally need to switch from one app to another with these solutions, which isn’t quite the seamless experience that desktop producers know, love and have come to rely upon.

They/we are used to running different plug-ins from all sorts of developers under one DAW hood. So, for iOS 9, Apple helpfully introduced the Audio Units extension that allows you to run compatible plug-ins within one another – no switching, just one app experience.

An AU synth, for example, will run directly within an AU sequencer – no swapping between the two – and you can save all the preset info and other settings of the synth when you save your DAW song.

It’s certainly a slick system and one that looks set to run (this is an Apple development on an Apple platform, after all), and is possibly the most important development in iOS music production, since it allows you to truly mirror that desktop DAW experience in iOS.

While we’re talking technology platforms, we should mention Ableton Link. This lets different devices to sync together over a network, so you could, for example, have two different collaborators on two different computers, working together.

Link also enables you to bring iOS devices to the party, so you could if you so desire, have Ableton Live providing the melodies while your friend provides beats for the same project via their iPhone. It’s all very cool, so if this appeals, then look out for Link compatibility in our Buyer’s Guide, where we also list Audiobus, AU and IAA support.

Anatomy of an iOS DAW: The newer designs 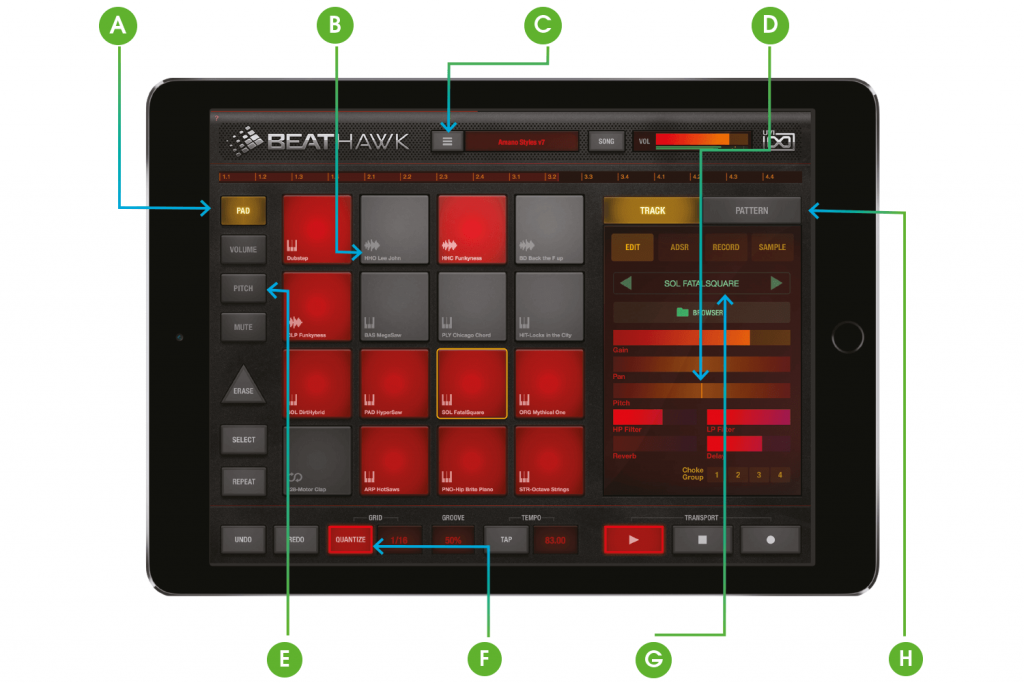 This is UVI’s BeatHawk, very much a modern-day iOS DAW: so you don’t get a traditional layout and everything is optimised for touch.

B) New ways to play

Rather than a traditional keyboard, many iPad apps offer different ways of playing notes, such as the ‘pad’ style – as shown here.

Newer performance apps have options hidden away to make them more intuitive. In this case, in one drop-down menu.

A traditional mixer is replaced by a ‘per track’ one to adjust the volume level, pan and pitch of the sound on the pad selected.

Beathawk actually allows a more traditional keyboard to replace the pads and you can use it with both hands (just about).

A lot of the features of a fully fledged DAW are simplified here. The Quantize works well without issues and Undo and Redo are given their own buttons.

A lot of apps from newer developers have inter-app purchases, so you’ll typically get free sounds for your songs (as here) and then purchase more if you like.

The most exciting editing screens are hidden away behind here, so the traditional piano roll and step editors are present, but they don’t get in the way of the fun

The iOS platform has been so successful that there are literally tens of thousands of apps now available for it, with a large portion of those dedicated to music making. We are therefore splitting this guide in two, so this time around, we’ll start at the beginning and look at some of the most popular DAWs that you can get for the platform.

We’ll then start looking at our favourite range of instrument – the synthesiser – with 16 of the best. Like we say, we can’t include everything, so we’ve put in the ones we’ve tested or we own so we can give a measured opinion on each one.

Be aware that you may need to check compatibility with our recommendations with your iOS device. New iPhones (post-2013 iPhone 5cs) and iPads (post-2012 iPad 4s) that can run iOS 11 will be 64-bit, so might not run some of the older apps if they’ve not been updated.

Conversely, if your device is old, it will probably be 32-bit so won’t run newer 64-bit apps – we’re just upgrading one of the office iPads to test IK Multimedia’s iOS version of the recently released Syntronik, for example.

Next time, we’ll continue looking at more music-making apps, including beats and other instruments,as well as the industry of accessories and interfaces that has sprung up around today’s iPhone and iPad. Until then, enjoy some app action – and come back next time for Part 2.

Click here for our buyer’s guide to iOS apps

Check out our buyer’s guide for the iPad dance producer