The Essential Guide to Beat Programming in Software

Your guide to making beats in software begins here, so get ready to groove… There are almost too many options when it comes to creating grooves and beats for your music these days. We’re a technology-based website so we’ll ignore the obvious one for the moment: a drummer! We have plenty of features on recording […]

Your guide to making beats in software begins here, so get ready to groove… 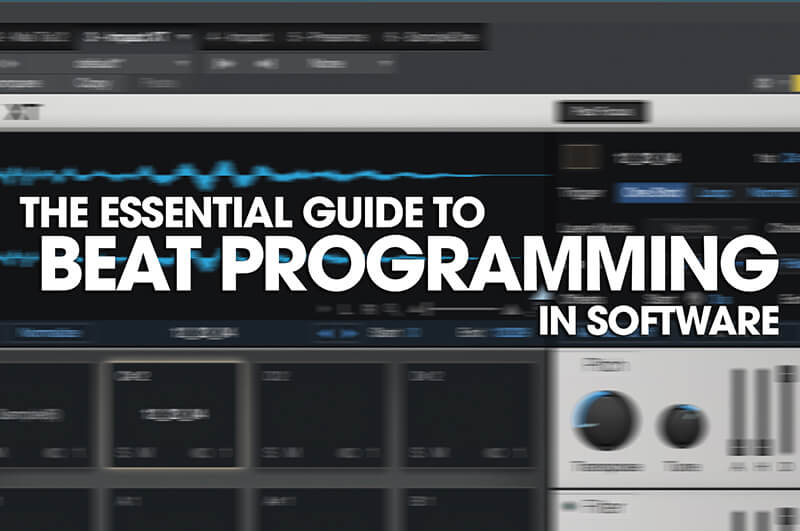 There are almost too many options when it comes to creating grooves and beats for your music these days. We’re a technology-based website so we’ll ignore the obvious one for the moment: a drummer!

We have plenty of features on recording real drums here at MusicTech.net and, of course, if you have the skills, the space and the kit, then nothing beats the sound of a real drummer in full flow.

However, there’s plenty of technology around if you are lacking a drummer and this time around we’re focusing on what you can do within your computer, either in your DAW or with specialist beat software. We’ll take you through the first principles of using software drum machines and drum editing software and show you how to program some popular music genres.

Your DAW is open to beats

At the centre of your studio is your DAW and we’re willing to bet that it has everything you need to create beats. DAWs can help you with this in three main ways. You can record that drummer we mentioned, or you can create beats from scratch using a software instrument or samples. With samples you can arrange hits or load in entire loops of audio that may be real drummers playing or loops from drum machines that someone else has recorded. In some cases – with all the legal boxes checked, of course – samples might even be from records.

The point is, with loops you can simply lay them down next to one another within your DAW to create an entire backing track. It’s the fastest way to create a percussion track but also, perhaps, the least satisfying and creative. The best way to create beats and the most flexible in terms of your input and customisation, is by programming them yourself and for this you will need either an instrument like this one (the new from Impact XT drum instrument from FL Studio) to trigger and record some samples… 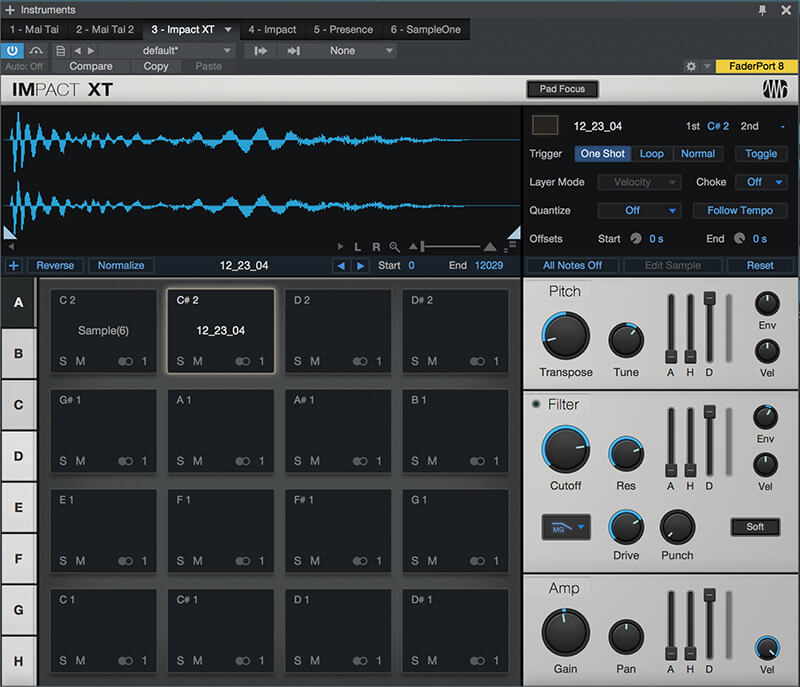 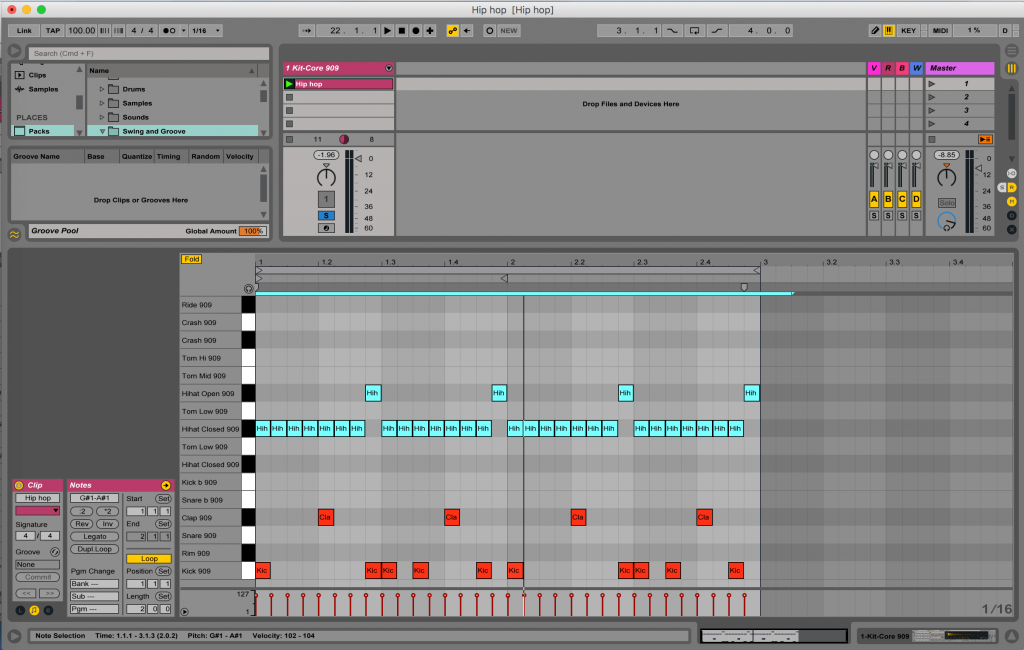 With the drum pad instruments you often need to load in some sounds, but usually they will come with genre-based kits – hip hop, techno etc – that have preloaded sounds set up on each of the pads. Then it’s simply a case of playing the beats and recording. What you record will then appear in the drum editor as shown but it’s just as easy to program the beats here by drawing them in so you don’t have to worry about playing them in time when you record live.

We’re going to concentrate on the drum editor method and, with it, you can then learn how to program beats in different genres. You are essentially drawing in the beats as blocks to trigger different sounds – bass drum, snare etc – as the editor cycles around over 8 or 16 bars. It’s very easy to draw in or delete notes and create loops very quickly. (By the way, you don’t need to program beats using this type of editor – you could use a standard piano roll editor if you like – but drum editors like this have become almost universal in the DAW world so you’re very likely to have one like it in your chosen DAW.)

The sounds you trigger

Different genres of music use different drum sounds and your DAW will most likely have a good selection of drum samples segregated into different kits for you to load in, so you won’t necessarily have to worry about choosing and arranging samples into kits. For example, rock and country kits tend to consist of acoustic samples taken from real drum kits – as, of course, used by rock and country drummers. Dance music tends to use classic Roland drum machine sounds from that company’s vintage TR-range of drum machines; pop uses a selection of either type; and urban genres might use classic TR-909 sounds or other electronic kits.

Once you’ve programmed your beats as shown below in our tutorial, most DAWs offer several options of what to do next. If you’ve used the drum editor you shouldn’t need to quantise to lock the beats in time but all DAWs offer this is you need it. Many also offer groove templates so you can change the style by moving the notes around by dragging a template onto each MIDI clip.

This is great for adding some life to soulless beats or a human swing to electronic beats. Indeed there are also many more ways to get a human feel, which you can see very soon in our forthcoming top tips for programming beats feature.

For now, think about changing the velocities of your notes to make them sound more varied, or layering different sounds together to give you more dynamics as you loop. You can also add ghost notes which are quieter notes that add a nice human shuffle to proceedings.

Our tutorial below gives you a quick guide to programming beats in a typical drum editor for a wide variety of genres. Also, do check out our 6 Of The Best Beat makers in software here.

We’re using the drum editor in Ableton Live and the various kits that come with that software to illustrate how to program different styles of beats, but your DAW should have something similar and the samples you need for each. We’ve used a 909 kit for sounds apart from the rock grooves which use an acoustic set of sounds. 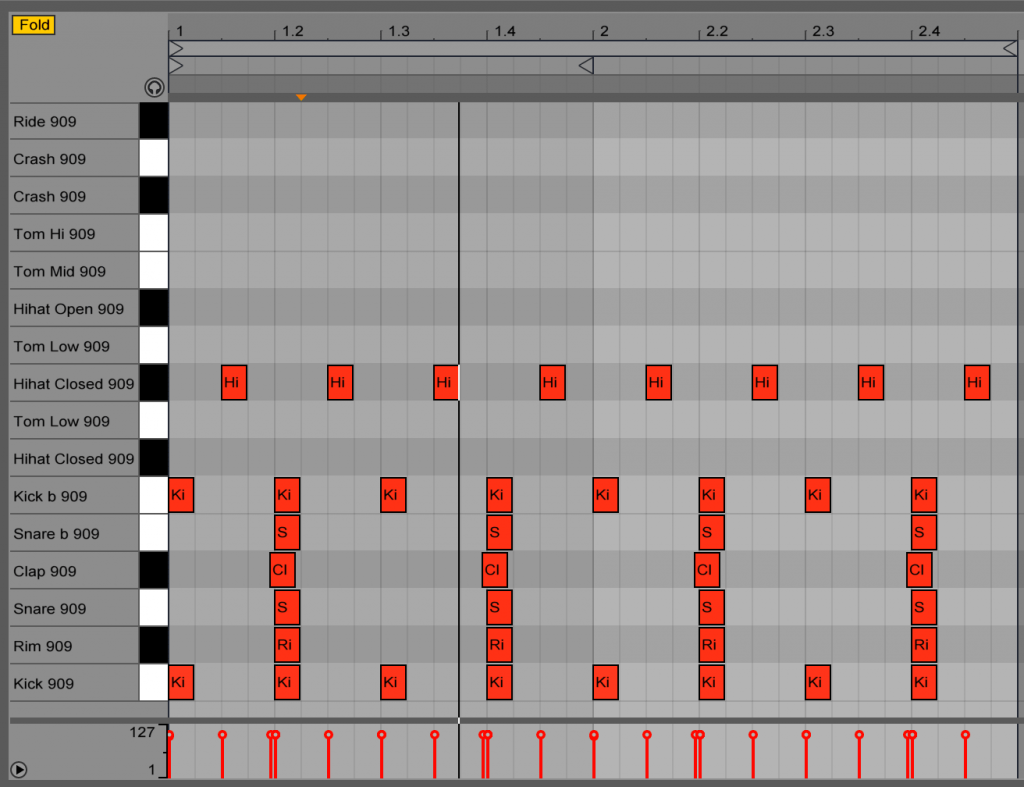 Basic house has a kick on every beat and snare on every other. Add some closed hi-hats on the off beat and another kick to fatten things up. A clap, slightly before the snare is also an option but as long as you have the basic four-four kick and snare you can branch off into all of the many house genres from here. 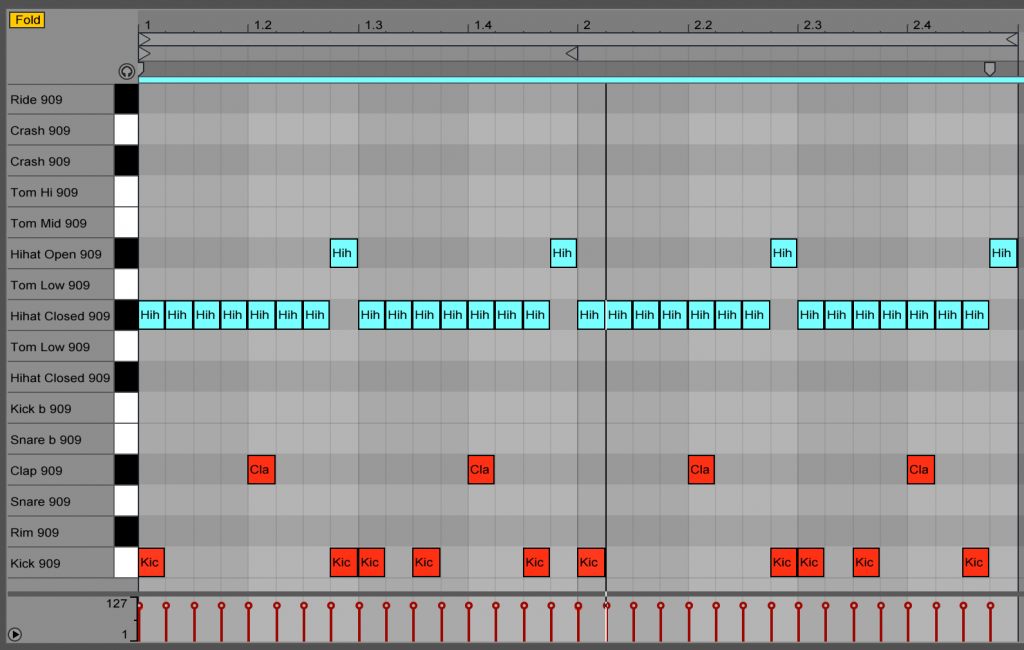 Start with a 909 clap on the second and fourth beats and the kicks at the start of beats one and three. Now it’s all about using the kicks to add a bit of swing by placing more kicks on the different beat divisions – say beat eight, eleven and fifteen out of the first four bars. Then draw in seven closed hats and an open hat over each of the two bars. 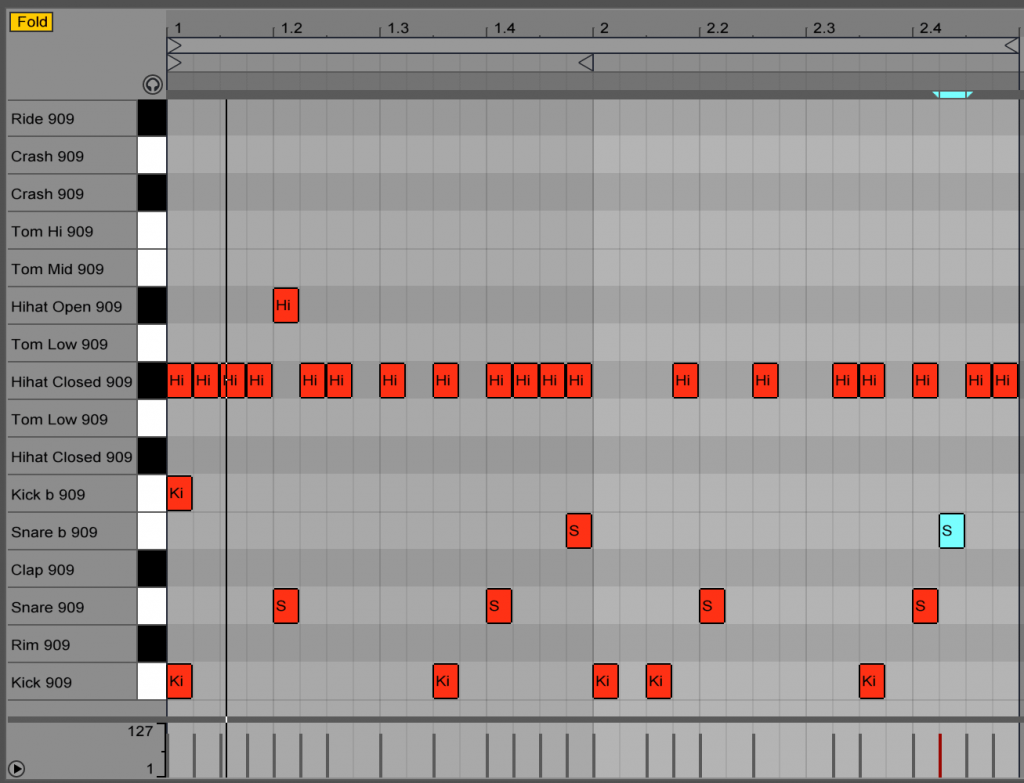 You’re upping the tempo to at least 170bpm now and you then place snares on the second and fourth beats of each bar and place a kick at the start of each bar. Then try placing another kick between beats three and four. A different kick adds clout layered with the first kick and you then add some urgency with some closed hats and some off-beat snares. 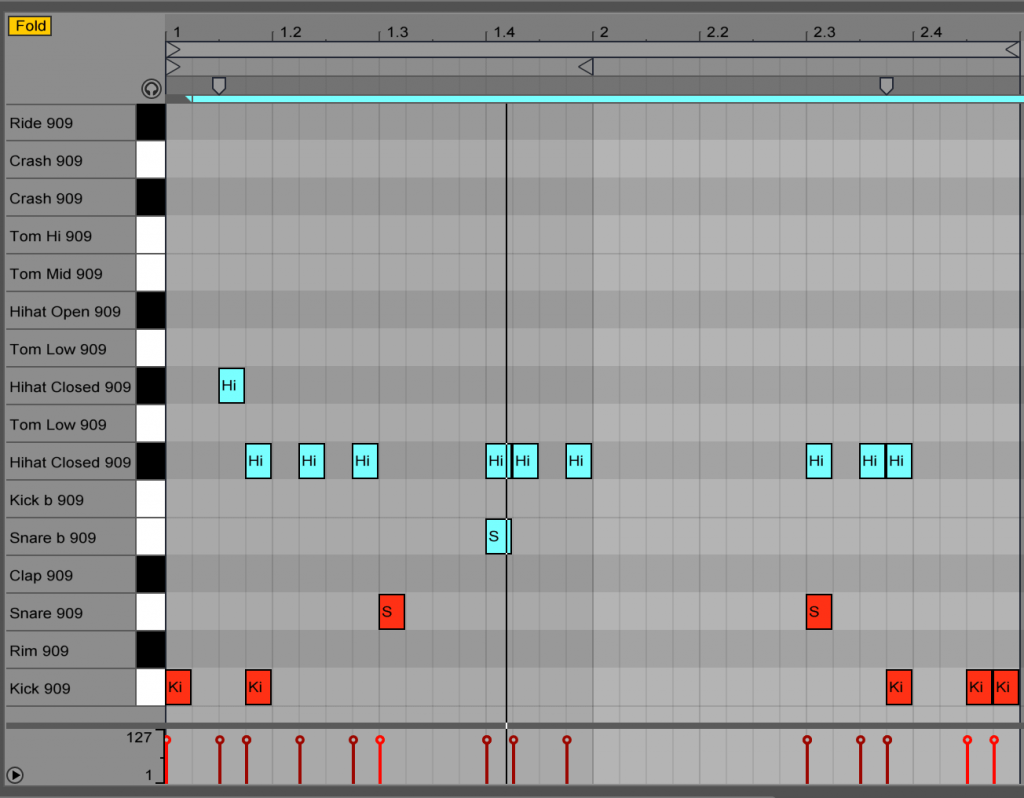 Add a snare on the third beat of each bar. Then it’s a matter of placing kicks (as shown) at the start and end, leaving a gap in between, a breathing space that creates tension. From there you can add what you want but you need that lull to create the large swing that grime has. Consider adding an extra groove template if you need it. 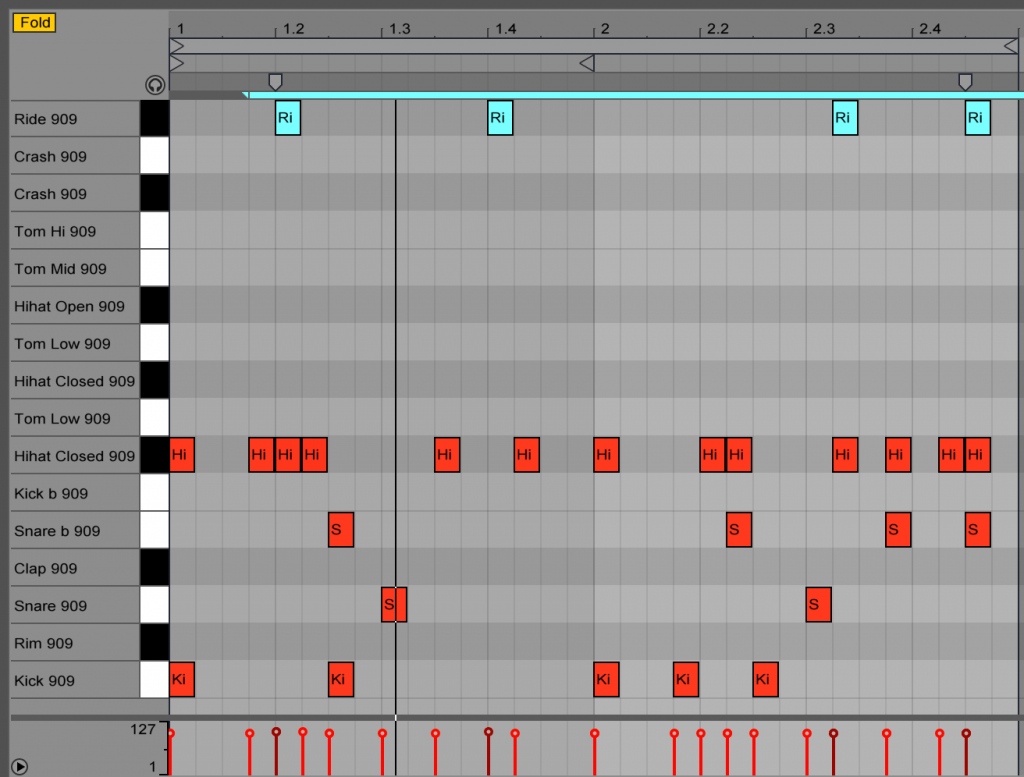 Start with a kick at the start of the bar and a snare on the third beat of each bar one. Now add a kick on the third beat of the second bar which almost ‘introduces’ the first snare hit. The closed hi-hat is very important providing some jitter as it opens on bar one and closes bar two. 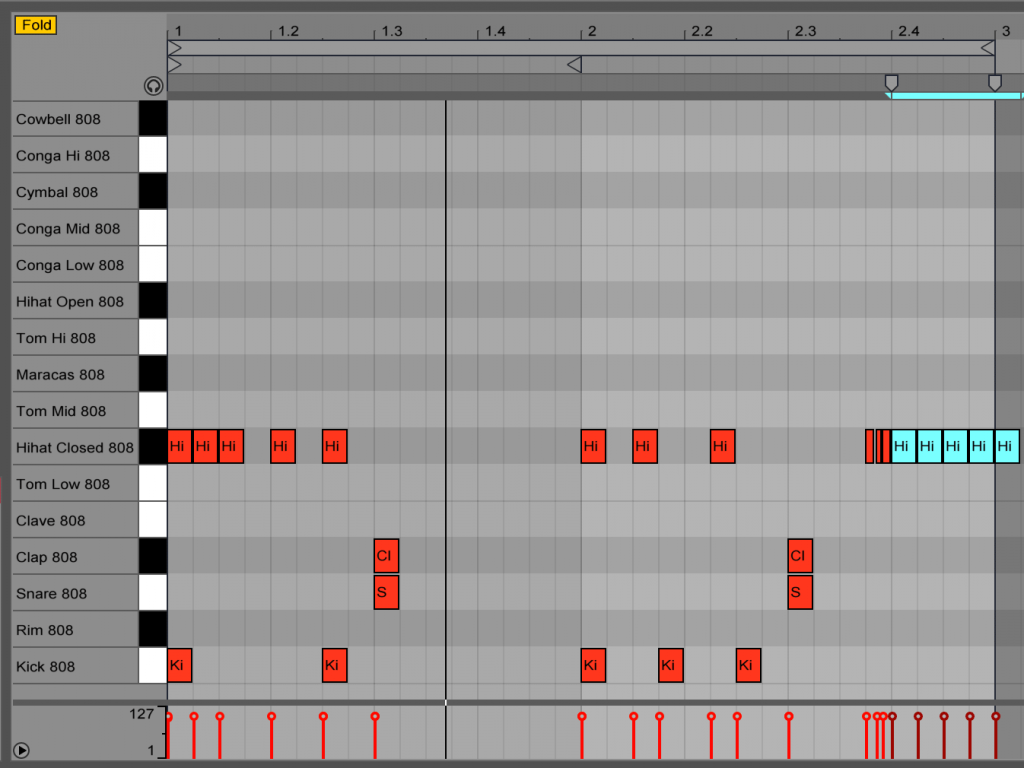 Trap starts off similar to dubstep with a kick at the start of the bar and a snare on the third beat of each bar. Place another kick between beats two and three of the first and second bar and another on the off beat of bar two. Added a clap on the snare to give it a crisper edge and closed hats with three quarter notes at the start of the first bar and then half notes. 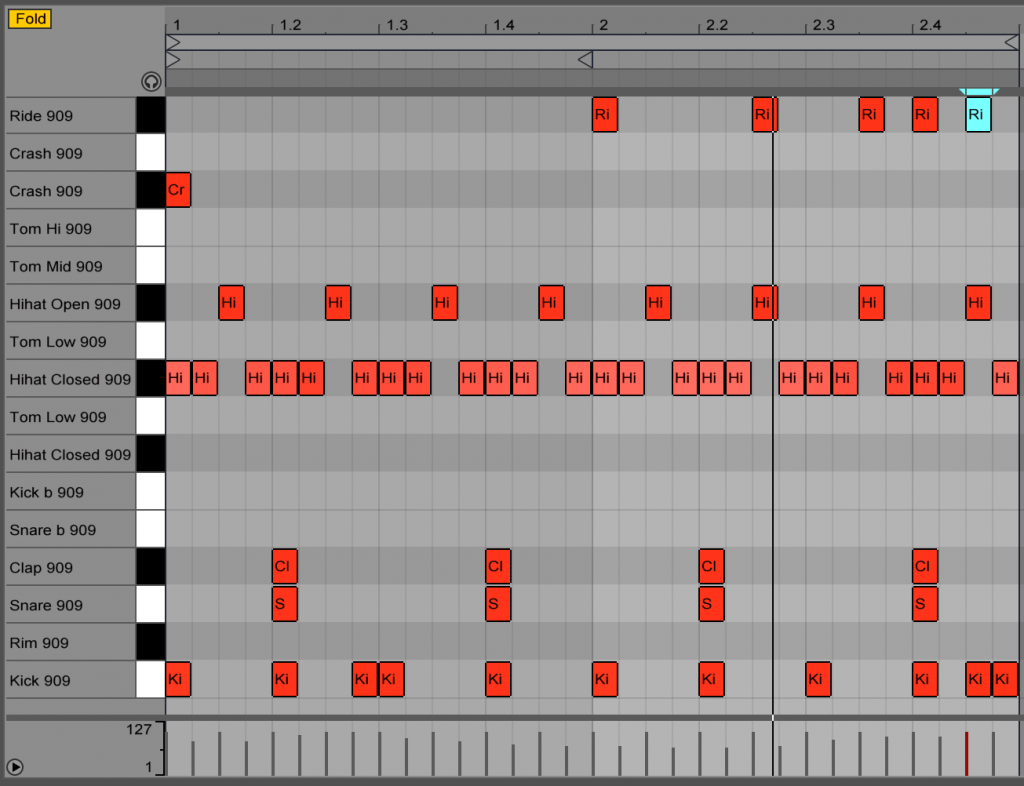 Use a 909 kit with a kick on the four beats in each bar and a snare or clap on the second and fourth beats. Draw in an open hi-hat on the off beat between kicks and closed hi hats as shown. This is your core beat but feel free to embellish with crashes on the first beat of the loop or by adding ride cymbals.

Finally it’s good old rock so choose an acoustic kit. In our case we loaded some samples into Live simply by dragging them over the pads. Then place a (big) snare on the first beat of the second and fourth bars and closed hats every other beat per bar. Then it’s four to the floor in terms of kick and an extra one following two beats after the second and fourth as shown. This is the basic rock beat.